Accessibility links
The Peculiar Parade Of Thanksgiving Traditions : NPR History Dept. Though it may seem like a fixed point in a fast-moving world, the Thanksgiving holiday continues to change and evolve.

The Peculiar Parade Of Thanksgiving Traditions

The Peculiar Parade Of Thanksgiving Traditions 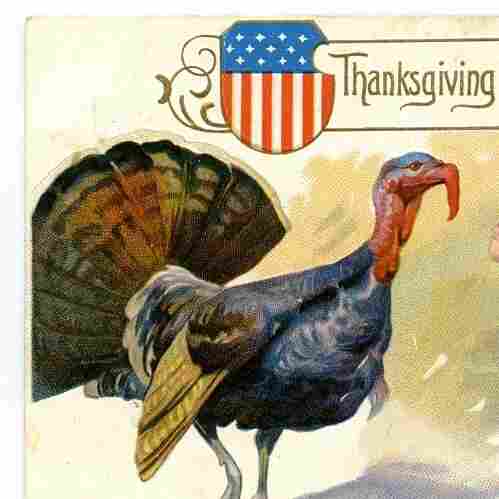 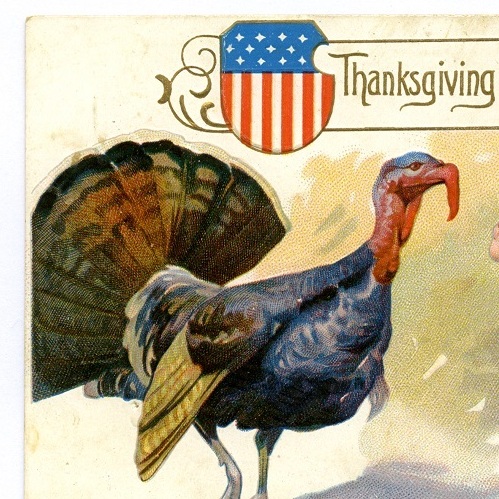 Time was in America that stores routinely closed on Thanksgiving Day. Folks sent Thanksgiving greeting cards, people donned odd costumes and schools and communities staged elaborate parades and Thanksgiving pageants in which Native Americans and Pilgrims gathered together and smiled and waved.

This year, as Forbes reports, "Many stores will be open on Thanksgiving Day in order to gain an extra selling day." The sending of holiday cards by snail mail is in steady decline, according to the Hartford Courant. Millennials are moving toward more healthful Thanksgiving dinners, The Washington Post notes, and tossing out the cranberry sauce. And the Thanksgiving pageant has become politically controversial.

Last November, writing in the San Diego Union, Logan Jenkins pointed out that the traditional Thanksgiving pageant — celebrated in schools for decades — has become challenging. He cites an instructional video, created by a California school district for kindergartners, that calls on all school-sponsored Thanksgiving celebrations to incorporate "more than one point of view."

Incorporating the true feelings and actions of the Native Americans and the European immigrants is a complicated undertaking.

"In practice, the easiest way out of the Thanksgiving mess may be to do what schools did with Christmas events many years ago," Jenkins wrote. "Take it off the table."

Right before our eyes, Thanksgiving is changing. Shape-shifting. Thanksmorphing.

Why do some traditions abide and others appear — and then fade away — like floats and balloons in a Thanksgiving Day parade?

The notion of the patriotic turkey, for instance.

Who knows where it started? Perhaps in the 18th century when Benjamin Franklin famously praised the turkey as "much more respectable" than the national-symbol eagle. Or in the mid-19th century when people started habitually referring to the fowl in print as the "noble turkey." Or maybe it was around the turn of the 20th century, when the idea of the Thanksgiving turkey as sacrificial bird began to take flight. 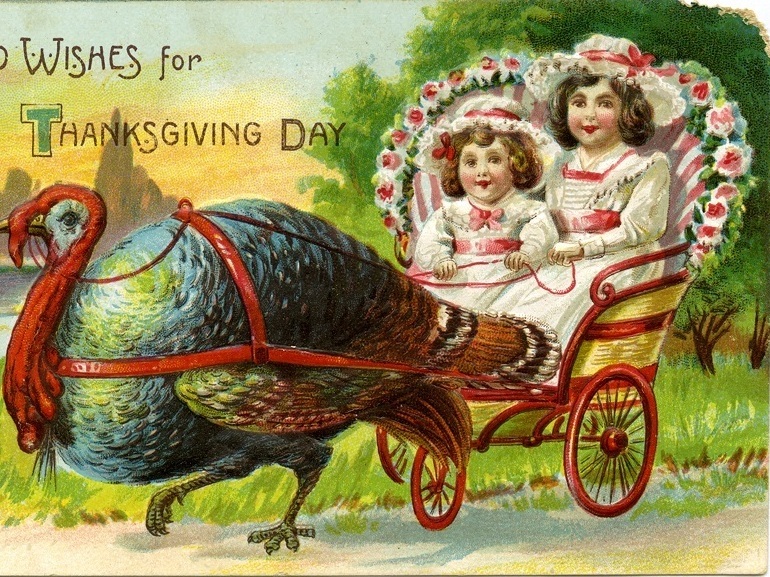 This last construct was summed up in a Vest Pocket Essay published in the San Francisco Call on Nov. 18, 1911. "The turkey is the national bird of thankfulness," the writer expounded. And "the patriotic turkey dies for his country on Thanksgiving day."

All but forgotten nowadays, the patriotic turkey — bestrewn with bunting, flanked by flags — was a popular character on another gone-with-the-wind Thanksgiving tradition ...

First advertised in the late 19th century, the Thanksgiving greeting card — like the Christmas card — was a prevalent holiday fixture in this country for decades.

"The newest thing in picture cards," noted the Nashville Tennessean on Oct. 31, 1880, "are the thanksgiving cards to be sent on the Puritan festival, which has become a national holiday."

A bookstore in Scranton, Pa., according to the local Truth on Nov. 18, 1910, sold linen Thanksgiving greeting cards with the message: "A sincere wish from the sender / That your Bird will be plump and tender." Card and envelope cost a dime.

Sincerity was the mood a la mode. "The sentiments of the 1932 cards," the Daily Messenger in Canandaigua, N.Y., reported on Nov. 21, 1932, "hark back strongly to the courageous spirit of the Puritan Thanksgiving. Wise-cracking remarks or good wishes in the pert spirit of modern youth are rare."

The Parade Reigns On

And "the revisionist traditions of Thanksgiving are going strong," Brooke Hansen, who teaches anthropology at Ithaca College, tells NPR. "We just had our yearly educational moment at Ithaca College with a presentation by Perry Ground — an Onondaga Turtle Clan educator who does a fantastic job deconstructing the fables of American Thanksgiving — no, the Pilgrims did not land at Plymouth Rock, in fact they didn't even call themselves Pilgrims. ... Turkey was not eaten."

Perry Ground has been thinking about Thanksgiving for years now. "Not all Native Americans have positive feelings about the Thanksgiving holiday," he observes in a 2011 essay. "To some it is a reminder of the negative relations between European settlers, later Americans and Native peoples. Since 1970, a small group of Native people led by some Wampanoag community members have declared the day after Thanksgiving to be a National Day of Mourning.. This event, held in Plymouth, Massachusetts each year, recognizes these struggles ..."

Ground writes that he celebrates Thanksgiving Day by eating turkey, cranberries and mashed potatoes with his family. "We will watch football, play games, take naps and get ready for the next day's shopping," he notes.

And he will be thankful. "That is an idea that we can carry away from this holiday," he concludes. "We can be thankful for what we have every day."