Accessibility links
Holiday Pop Quiz: Who Was The President ... ? : NPR History Dept. Deck the halls, stuff the stockings and sharpen your pencils. It's time for a holiday history exam.

Holiday Pop Quiz: Who Was The President ... ?

Holiday Pop Quiz: Who Was The President ... ? 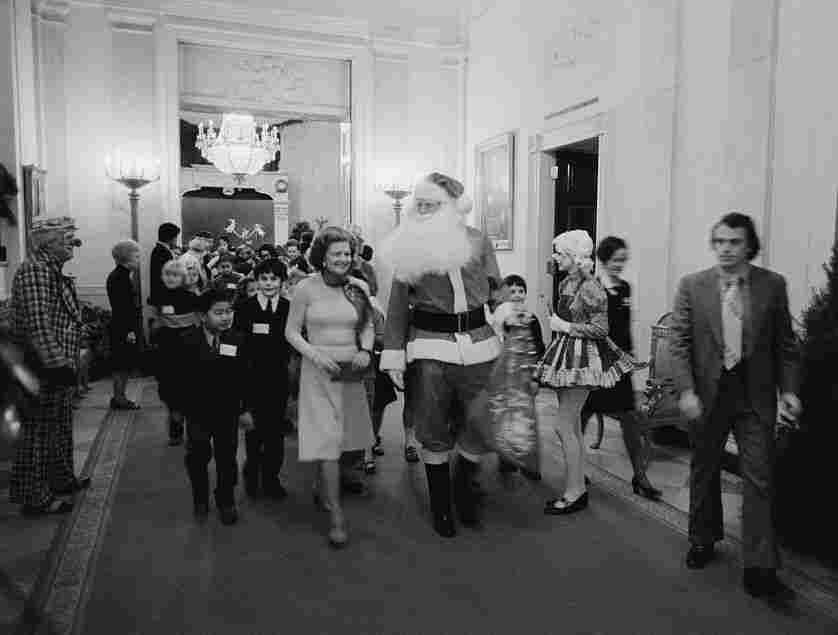 Holiday in the White House: First lady Betty Ford, Santa Claus and some clowns lead a procession of diplomatic corps children at a Christmas party in 1975. Library of Congress hide caption 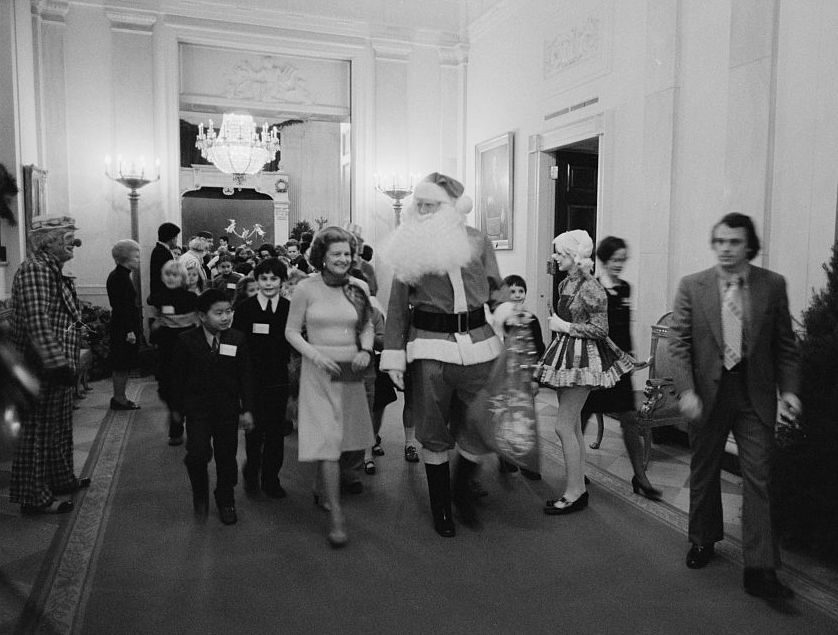 Holiday in the White House: First lady Betty Ford, Santa Claus and some clowns lead a procession of diplomatic corps children at a Christmas party in 1975.

The annual heavily choreographed PBS presentation Christmas in Washington has been canceled.

But there was a holiday season in the nation's capital long before the revue and there will be one for years to come.

Here are seven stories of holiday happenings at the White House. Your challenge is to fill in each blank with the name of the correct president. Yes, you in the back ... of course you can use Google. After all: This isn't school; this is NPR. (Or you can glance at the Answers and Sources at the bottom.)

1. A turkey in every pot. For Christmas in 1883, President ________ gave his daughter, Ellen, a pair of diamond earrings; his son, Chester, a gift of $150; and to every member of the White House staff he gave a turkey and a check for $15. The president, in turn, received a half-dozen gold-headed canes, several cases of wine and many boxes of cigars.

2. A dry Christmas. Washington "resembles a deserted village," the Ottawa, Kan., Daily Republic reported on Christmas Day in 1885 during the administration of President _________. "A few clerks and messengers only are to be seen. The callers at the White House have been few." Perhaps by way of explanation, the paper continued, "Rumor has it that _______ loves his grog." But apparently the president's sister, Rose — keeper of the White House until he married in 1886 — was more inclined toward temperance. She also "issued orders prohibiting smoking in the corridors and in the vestibule." A critic suggested in the newspaper that the next step was a sign on the front door saying "Wipe Your Feet." 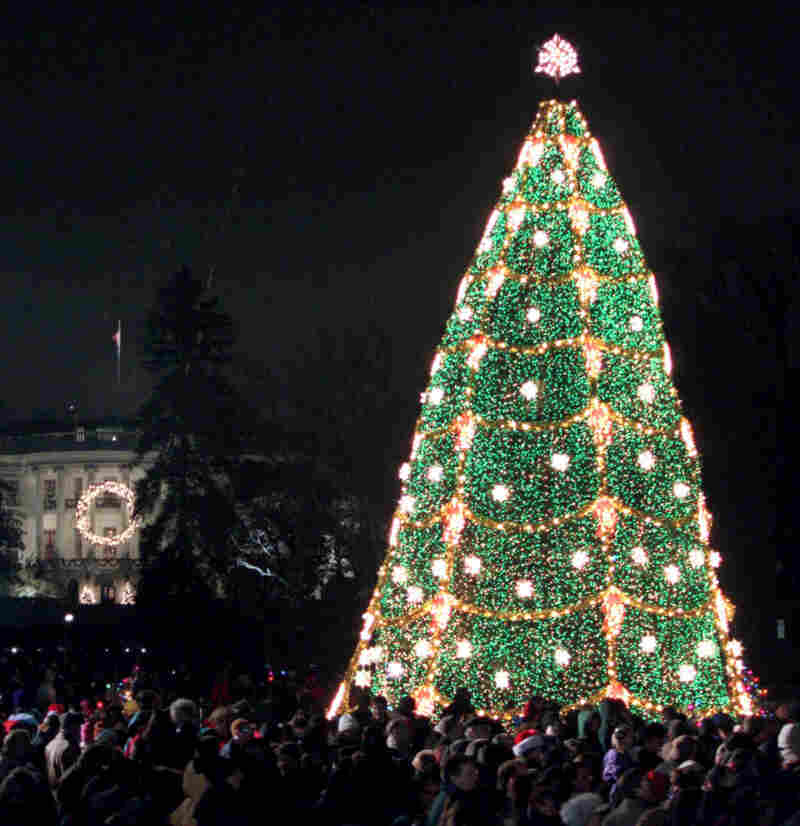 The National Christmas Tree on the Ellipse near the White House after being lit at the annual Pageant of Peace ceremony in December 2000. Michael DiBari Jr./AP hide caption 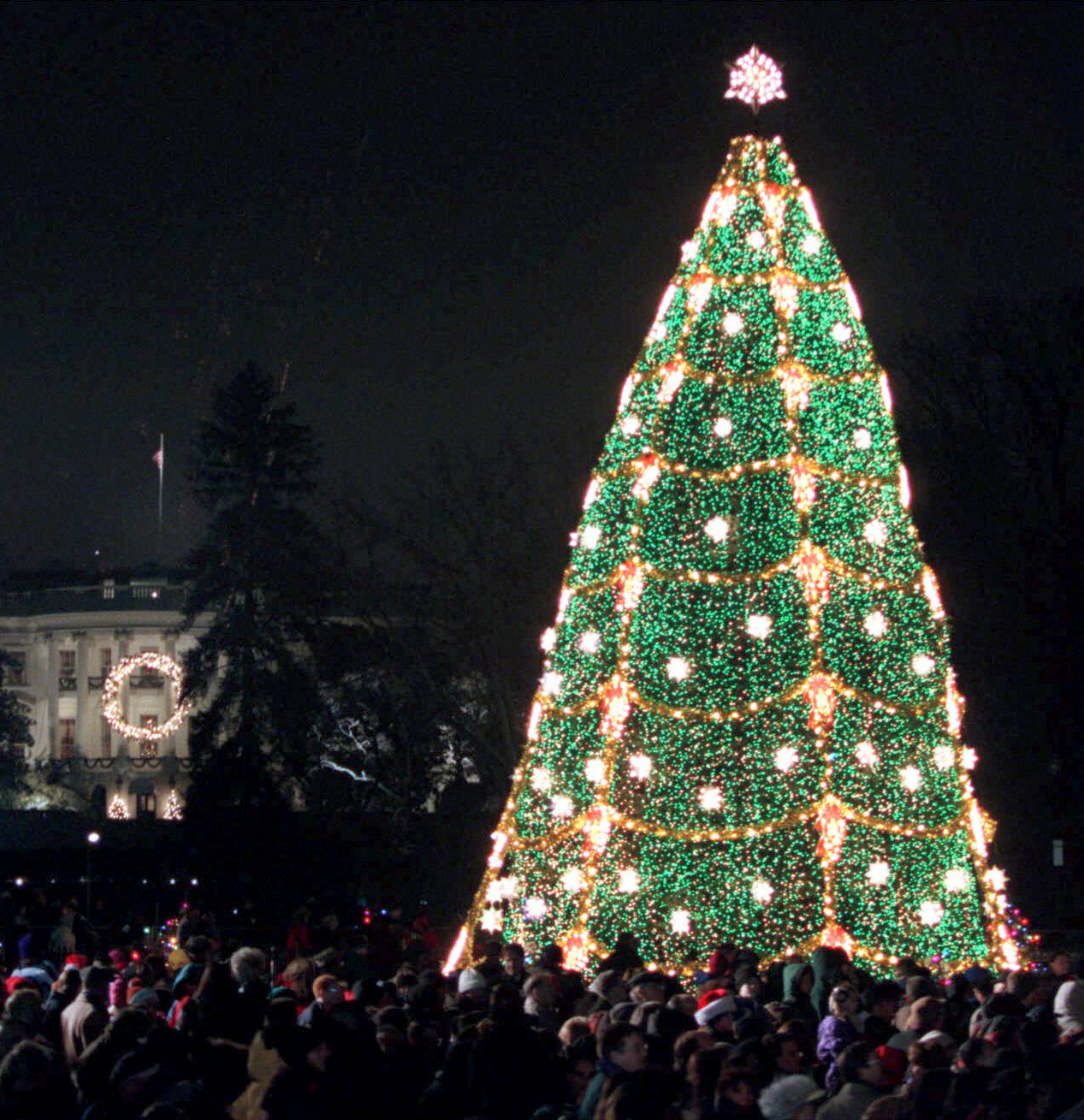 The National Christmas Tree on the Ellipse near the White House after being lit at the annual Pageant of Peace ceremony in December 2000.

3. A German day in the White House. At 10 on the morning of Dec. 25, 1891, President ________ led a family parade — including his niece, Mary Dimmick (who would become the president's second wife), and his father-in-law, John Witherspoon Scott — through the private quarters. Mary Dimmick sounded a tin horn and the president's grandson, a namesake known as "Baby," and granddaughter, Mary McKee, recited poems in German — taught them by their governess, Fraulein Hampe. "It was a German Christmas Day," according to a reporter.

4. Pulse warmers. Surrounded by family, President ______ and his fragile wife, Ida, dined quietly at the White House. A seasoned do-it-yourselfer, the president's wife had made a slew of gifts, such as sachet bags, slippers and pulse warmers, the newspaper reported, "and they were all neatly wrapped in white tissue paper, tied with scarlet ribbon with a little bunch of holly nestling in the folds and were delivered by messenger." One of the guests at the White House was the president's niece, Mabel, a famous singer.

5. Little drummer boy. John L. Clem, the nationally famous "Drummer Boy of Shiloh," stopped by the White House on Christmas Day 1871 to personally thank President _______ for his promotion to second lieutenant in the 24th Infantry.

6. Pain and champagne. Christmas of 1978 was a strange amalgam of highs and lows and ho ho hos, according to the Associated Press. President ______ greeted more than 1,200 visitors to the White House, despite "suffering what press secretary Jody Powell termed 'rather considerable pain the last couple of days' from a chronic hemorrhoid condition." The first family served cookies to the children of diplomats and champagne to members of Congress.

7. Emergency exit. At a Christmas party for children in 1929, while President _____ was in the White House, an electrical fire ignited in the West Wing, destroying the Oval Office. Guests were invited back the next year with invitations that read: "This is not like the Christmas parties you usually go to...for Santa Claus has sent word that he is not going to be able, by himself, to take care of all the little girls and boys he wants to this year, and he has asked other people to help him as much as possible. So if you bring some presents with you, we will send them all to him to distribute." Each guest received a miniature fire engine as a party favor.