Accessibility links
'Dong Xuan Center:' A Taste Of Vietnam Via Lichtenberg : NPR FM Berlin Blog The Dong Xuan Center, located on Herzbergstrasse in Lichtenberg, opens up to an immense parking lot and large warehouses, which are home to Berlin's little taste of Asia. Once inside, 104,1's Tam Eastley found row after row of clothing stores, bedding supply stores, grocery stores, and Vietnamese restaurants.

'Dong Xuan Center:' A Taste Of Vietnam Via Lichtenberg

'Dong Xuan Center:' A Taste Of Vietnam Via Lichtenberg 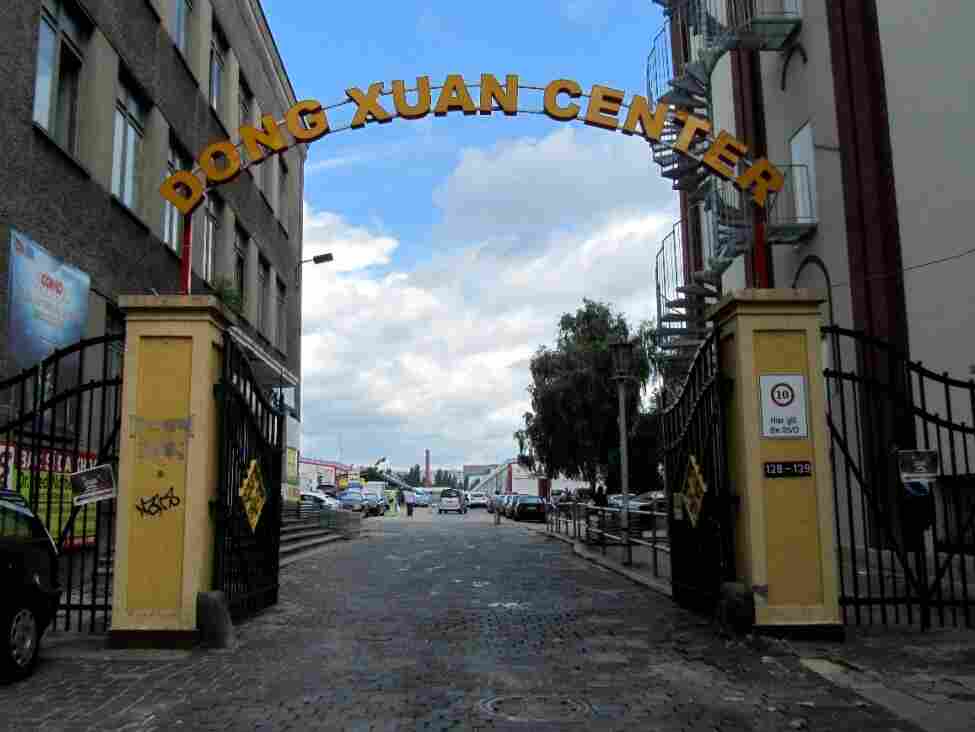 The Dong Xuan Center is located off Herzbergstrasse in Lichtenberg. Tam Eastley for NPR hide caption 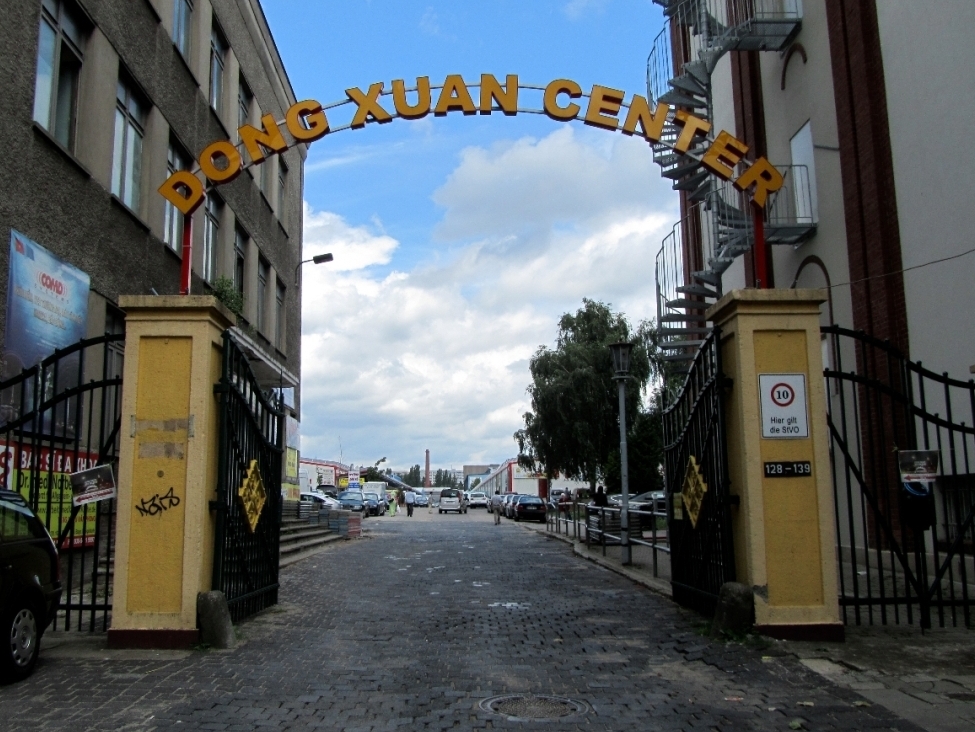 The Dong Xuan Center is located off Herzbergstrasse in Lichtenberg.

Not too long ago, a friend told me about the vast warehouses of Lichtenberg that are home to Berlin's little known Vietnamese market.

Nestled within an industrial area, surrounded by abandoned and crumbling brick buildings, and plastered with advertisements for Vietnamese driving schools and nail salons, is the Dong Xuan Center, named after Hanoi's market of the same name.

The arched entrance way on Herzbergstraße opens up to an immense parking lot, framed by four large warehouses, which are home to Berlin's little taste of Asia.

After picking up a bag of Vietnamese organic mixed fruit chips, I set off exploring. 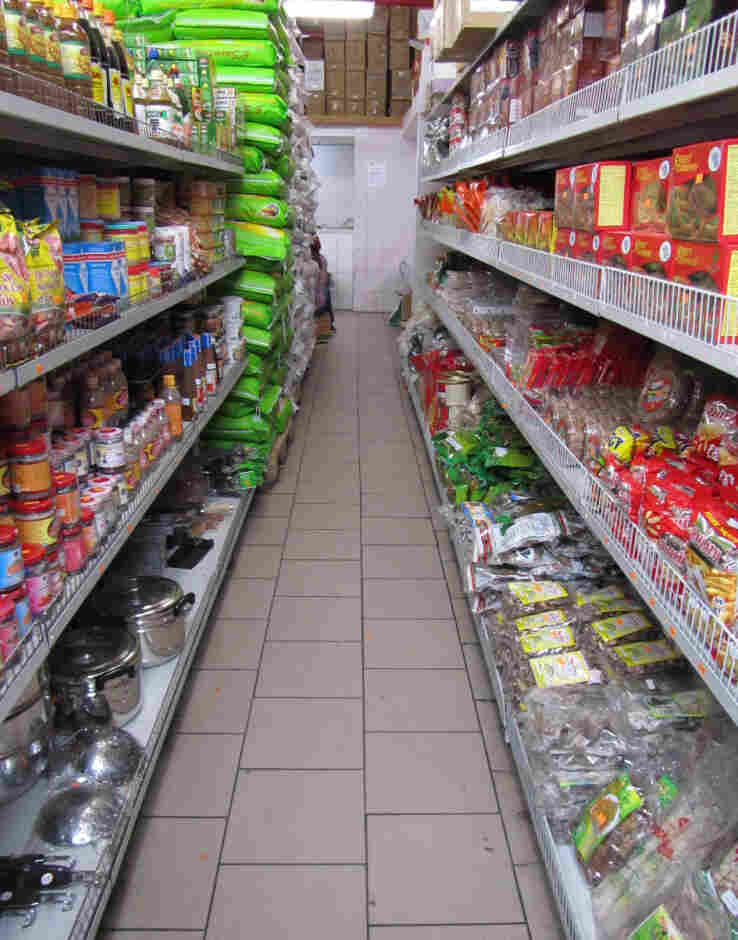 Ginger, carambola, bitter melon, and a variety of other foods are on sale in one of the grocery stores. Tam Eastley for NPR hide caption

I entered through a cloud of incense, emanating from a myriad of storefront shrines. Around me flowed the sound of a language I didn't understand, and ahead of me was row after row of clothing stores, bedding supply stores, grocery stores, and Vietnamese restaurants.

Cheap anything-and-everything stores sold the likes of rice cookers in a variety of sizes and flasks with the face of Lenin emblazoned on the front.

Canned winter melon tea and grass jelly drink were stocked in abundance in the cold drinks section, and deep within the store's freezers, everything from taro, coconut, and pandan nata de coco popsicles to shrink-wrapped frozen baby octopus wait to be discovered, and experienced. 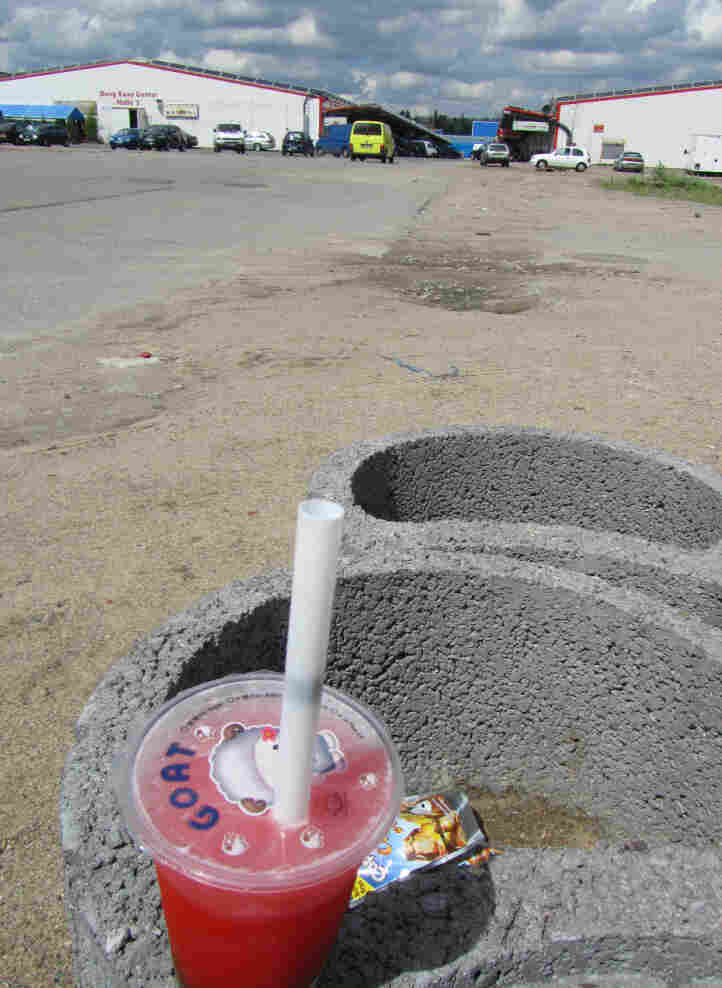 Outside of the grocery stores, food kiosks, and restaurants, small tables displayed a variety of Vietnamese cakes like bánh.

To finish off the day, I stopped for a strawberry yogurt bubble tea at Bobo Q, a small bubble tea cafe, equipped with an outdoor sandpit with chairs and umbrellas.

It's the perfect place to sit back, relax, and reflect on the exciting experience of the Dong Xuan Center. One truly worthy of an entire day of window-shopping, bargain hunting, exploring, and eating.

Do you know of unexplored neighborhoods, markets, or hole in the wall spots I should visit in Berlin? Send me an email at tam.berlintravel@googlemail.com and we'll talk.