Accessibility links
A Curious Road From Mercedes-Benz To Veganz : NPR FM Berlin Blog Veganz, Europe's first and only 100% vegan supermarket, opened just a few months ago in Prenzlauer Berg. Since then, it has become a neighborhood institution. Unlike many boutique grocers with top-shelf goods, Veganz offers premium options as well as more reasonably priced versions of the same goods.

A Curious Road From Mercedes-Benz To Veganz

A Curious Road From Mercedes-Benz To Veganz 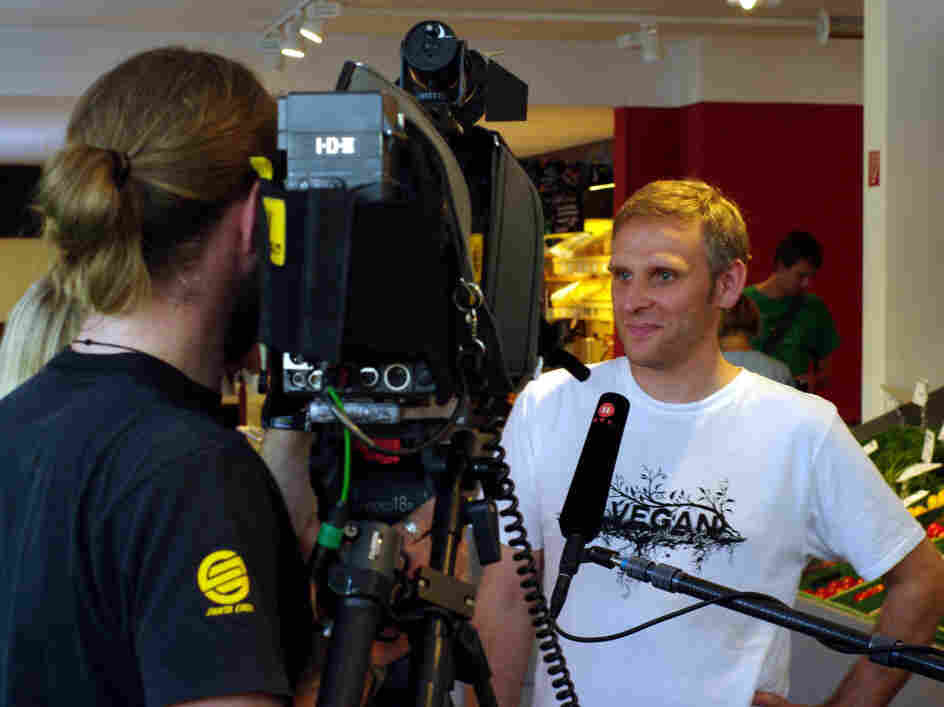 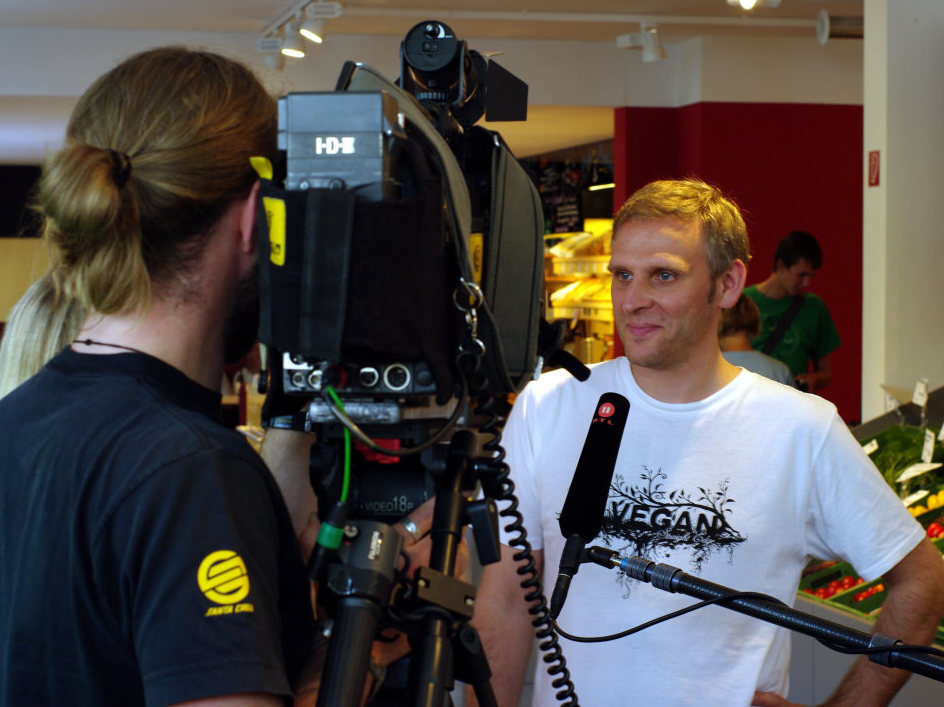 "It's a freak city- the ugly carnival of a wall cutting us in half and the vacuum left when it fell. Because we are freaks, we are emboldened. There is more room for risk because we have nothing to lose."

Lena Einecke, with her lanky limbs and glossy, spun-gold hair, is a vision of health.

Conversationally, her playful, proficient use of language (for a recent interview, we spoke in English, her second tongue) gives seamless expression to the philosophical principles that inform her position as product manager at Veganz, Europe's first and only 100% vegan supermarket.

Set aside for a moment the obvious paradox that Veganz, which opened in Prenzlauer Berg only a few months ago, came into being in a staunchly carnivorous country (Germany's gastronomic portfolio boasts over 1,500 different sausages).

Consider instead that America's most politically-radical city, San Francisco, doesn't even have one. There's literally no likelier metropolitan region in the world for an all-vegan general store.

But have they got it?

Store founder and owner Jan Bredack, whose lean, athletic frame attests to the years he has spent training for triathlons, formerly worked in the upper echelons of business administration for the Mercedes-Benz empire.

On the day we met, Bredack wore a black apron; sweat glistened on his brow from unloading 50 pound cardboard boxes of stock into Veganz' back storage area. Just a few years ago, he went vegan (his original impetus was the persuasive influence of a woman) and decided to take a stand for something he believed in. 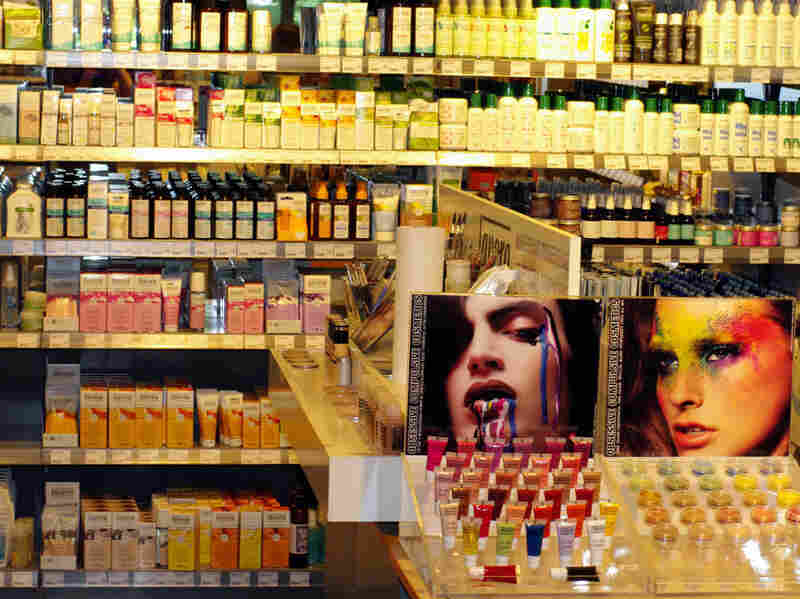 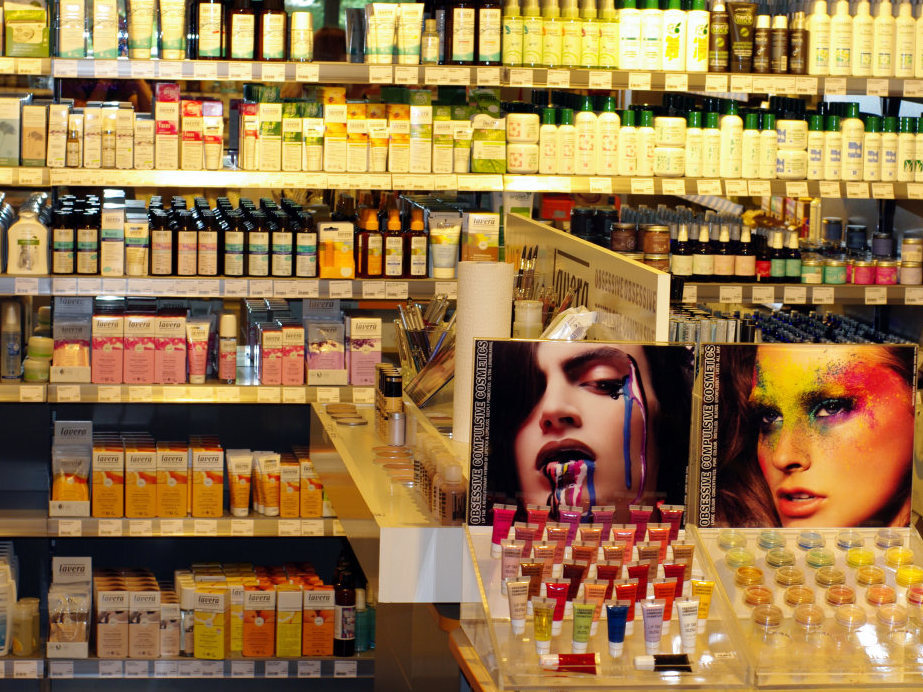 Emboldened by the evidence for the success of 100% plant-based businesses (international vegetarian directory Happy Cow currently lists about 60 such eateries in Berlin), he began applying his corporate prowess to this high-minded store.

And, while Veganz might be rooted in esoteric principles, it's more populist in orientation than anything. Unlike many boutique grocers with exclusively top-shelf goods, customers at Veganz have upper-tier, premium options as well as general, more reasonably priced versions of the same goods.

It's notable that Veganz operates on the very same block as Rewe, a ubiquitous big-box grocer that dominates Berlin's neighborhoods.

Lena Einecke says they actually like having Rewe as a neighbor.

In fact, the opening of our next store in the Friedrichshain district will be very near Kaiser's, another mainstream grocery chain. These big stores, because of their size and popular appeal, generate a lot of foot traffic in the area. Because we are positioned adjacent Rewe, our store actually has increased visibility. People who otherwise might never even know of our existence are drawn here by curiosity. The store is gorgeous, and it looks nice and inviting. They see products in our store, most of which are probably novel to them, and are intrigued. Perhaps they won't purchase anything that day, but there's a good chance that they will come back, that they will want to make sense of this unusual place, that they will want to know more.

Wooden shipping crates stamped with the words "cruelty-free" and "vegan" are stacked atop one another near the front entrance. They serve as tables where a smorgasbord of raw-food samples in little glass dishes- pumpkin seed butter, dehydrated flax seed crackers, and date cacao coconut confections- greet customers first walking into the store.

Veganz is a tour of staples, like organic quinoa and nutritional yeast, a vegan-kitchen hallmark that boasts a complete vitamin and mineral spectrum and folds into recipes like a flaky, powdered cheese. Throughout my extensive explorations of Berlin, Veganz is the sole purveyor of nutritional yeast I've come across and, as a vegetarian spoiled by the wealth of vegan foodstuffs in California's Bay Area, its discovery comes as something of a godsend.

"We don't intend for Veganz to be a health food shop but rather a general store where customers of all persuasions can shop," Einecke says.

"While veganism is already entrenched in American culture, Berlin is at the center of this movement in Europe. Geographically, we are in the very middle of the continent, and because the city's population is so international, we draw upon a breadth of influences and have openness to ideas from all four corners, as it were."

In the elegant, sunlight-filled Veganz bistro where we talk, a steady trickle of electronic club music pours softly from overhead. Grungy hippies and posh grandmotherly types alike form a constant stream through the front doors. Many make a beeline to the bakery to secure victuals from an impressive selection of in-house baked goods, prepared by well-known The Vegan Girl's Guide To Life author Melisser Elliott who relocated to Berlin from San Francisco after opening her cupcake shop there.

Customers snack on samples, pick up a pack of Tofurkey, and score wild-harvested micro-greens foraged that morning on the bucolic outskirts of town. Based on the crowds, not to mention the cheerful ding! of the cash register, it seems that Veganz, in only a few, short months, has become a neighborhood institution. And things aren't slowing down anytime soon. In addition to the opening of its forthcoming Friedrichshain store later this year, Veganz plans to begin expansion into all of the major German cities in 2012 and then take it international.

And their first stop in their march to veganize Europe?

"Berlin is such a judgment free place," Lena Einecke says.

"You can truly be free to just try out an idea. There is space, and rent is affordable. And this is a vital foundation for creative thought and entrepreneurship. There is no place like Berlin anywhere in the world. You just do it, and when you just do it, who knows what may come."