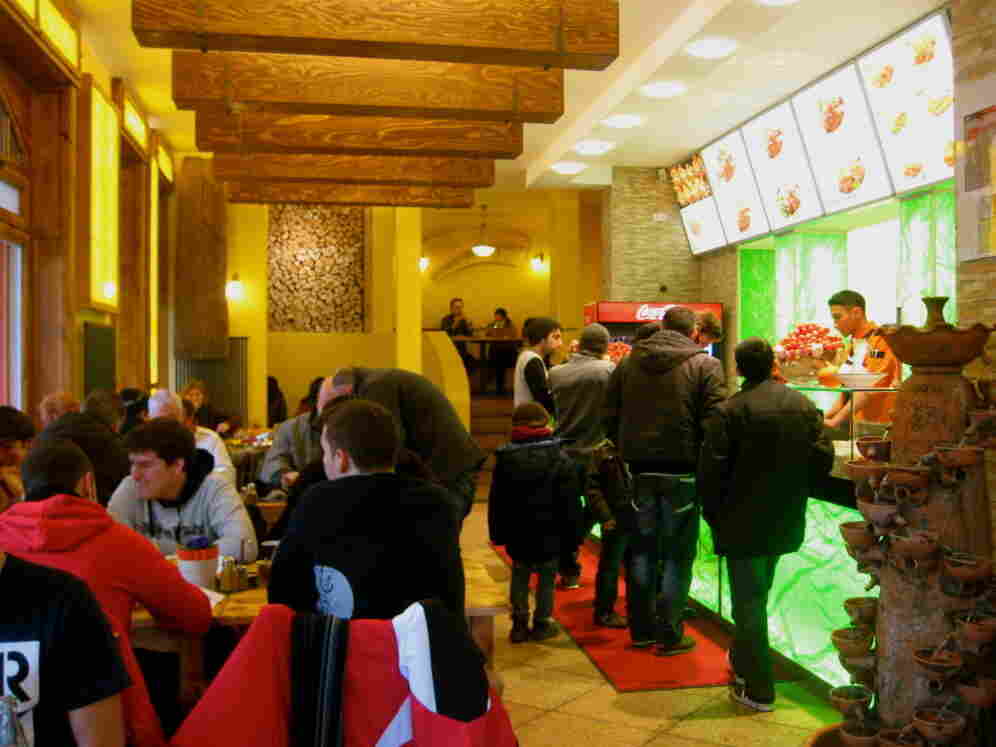 Hühnerhaus 36, an outdoor snack bar, is located near Görlitzer Str 1. The restaurant, pictured above, is on Skalitzer Str. 95a, 10997 Berlin, Kreuzberg. Layne Mosler for NPR Berlin hide caption 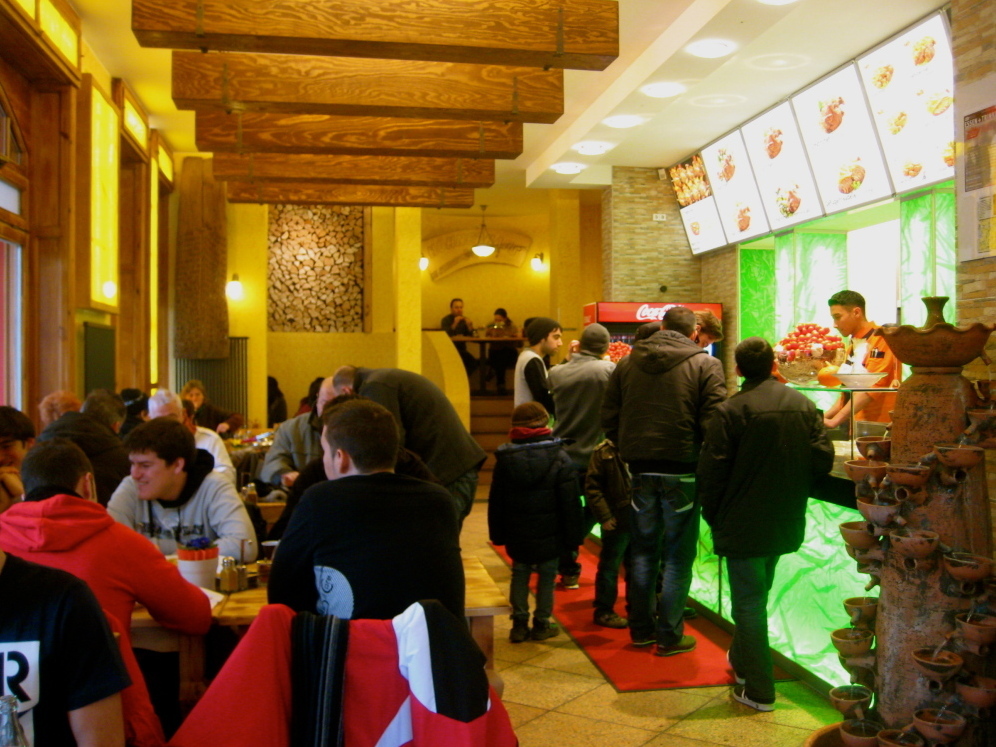 Hühnerhaus 36, an outdoor snack bar, is located near Görlitzer Str 1. The restaurant, pictured above, is on Skalitzer Str. 95a, 10997 Berlin, Kreuzberg.

"I have a theory," I said to the cabbie as we pulled away from the taxi stand at Wismarplatz in Friedrichshain.

"That cab drivers know where to find the best, cheapest things to eat in the city."

"Some taxi drivers know," the cabbie said. "Not all."

Fortunately, this cabbie, a forty-something Russian-German from Kazakhstan who has been driving a taxi in Berlin for the past seven years, is someone who does know about food. And like many Berlin cab drivers I have met in the quest for a good meal, Andreas Schulz* is also a fan of his job and his city.

"As a taxi driver, I get along with everyone," he says. "Berlin is multikulti, with lots of foreigners, lots of colors. I feel good here."

Schulz, a former professional auto painter, is a descendant of so-called Volga Germans who were invited by Catherine the Great to settle in Russia in the 18th century and deported to Siberia and Kazakhstan after the Nazi invasion during World War II.

Part of the wave of nearly two million ethnic Germans who began emigrating to Germany from the former Soviet Union in the 1990s, Schulz hasn't been back to Kazakhstan since he moved to Berlin 17 years ago.

During our trip from Friedrichshain to Kreuzberg, the taxi driver says that when he's craving the flavors of his homeland, he cooks pelmeni (dumplings) at home. There is no good Kazakh food in the German capital, he says.

But when he's hungry on duty, he likes to stop for döner kebab (without meat, since beef and lamb are "too heavy" for taxi driving), or at Hühnerhaus, the Halal chicken stand next to Görlitzer Park where he dropped me off before returning to his shift. 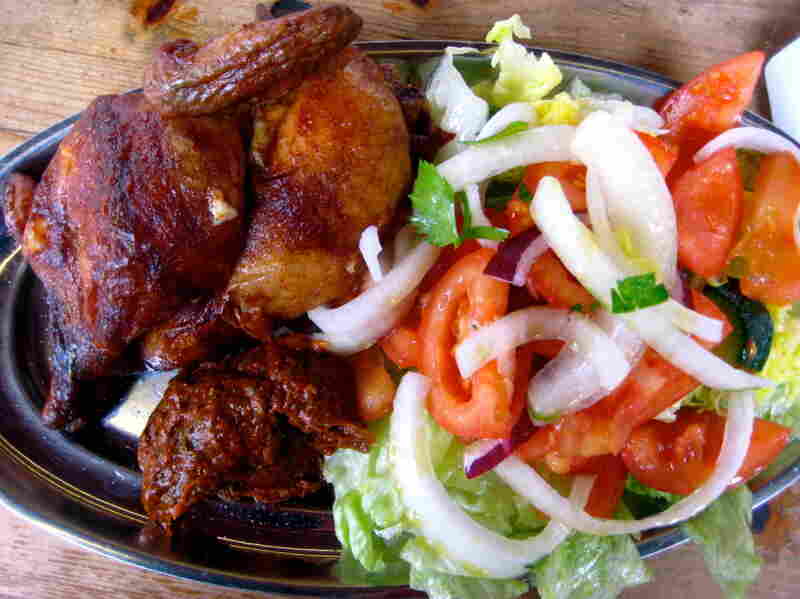 This half chicken and salad dish is a favorite of Andrea Schulz at Hühnerhaus. Layne Mosler for NPR Berlin hide caption 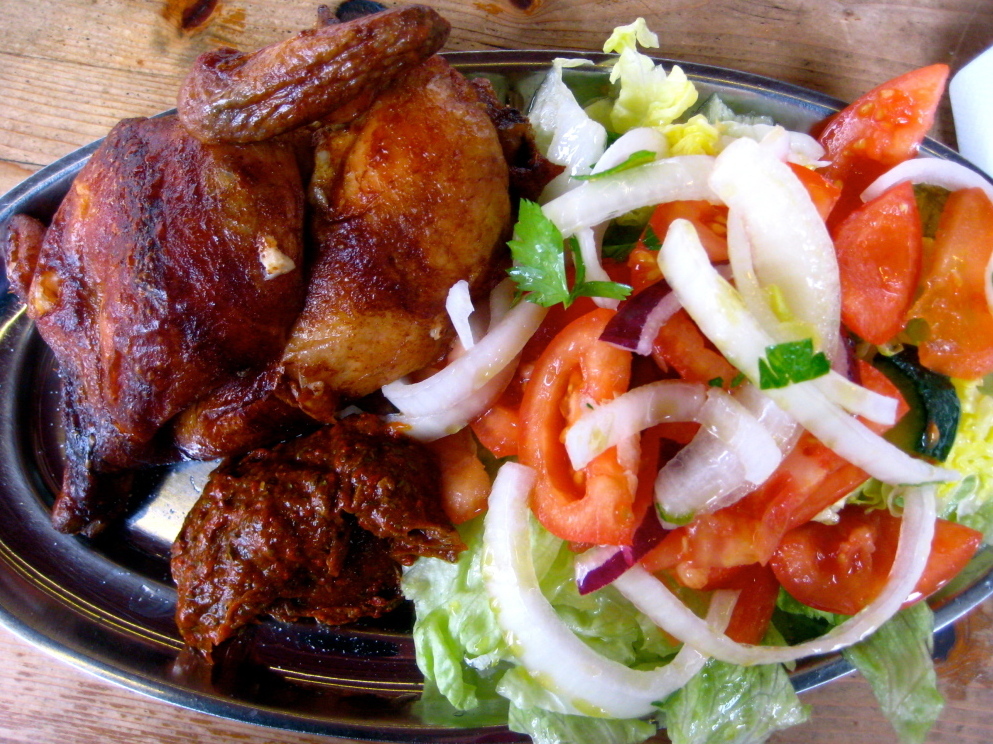 This half chicken and salad dish is a favorite of Andrea Schulz at Hühnerhaus.

It's no secret that Hühnerhaus has been popular with everyone from "actors and taxi drivers to police officers and punks" since it opened in 1995 (the same year Schulz came to Berlin).

It's also no wonder Schulz is a fan: there are few other places in the city where a person can eat so well for five Euro or less.

"Our quality is often imitated," the company slogan claims, "but never reached!"

I didn't have the heart to tell the cabbie Hühnerhaus was not new to me (or to many budget-conscious Berliners), but I was happy to eat his recommended half chicken (juicy and moist under buttery, rotisserie-crisp skin) and salad.

I was sorry, though, that I'd ordered a regular side salad (with iceberg lettuce, tomatoes and onions) instead of Weisskrautsalat (a slightly sweet, vinegar-based slaw that is my favorite foil for the chicken here).

Halfway through my 3.75 Euro lunch, I noticed something new: a giant chicken statue across the street from the snack bar. Above the statue, a sign in bright yellow read "Hühnerhaus 36."

"We opened it in December. The food is the same, but we have some new things – chicken soup and wings and chicken kebabs. You should check it out." 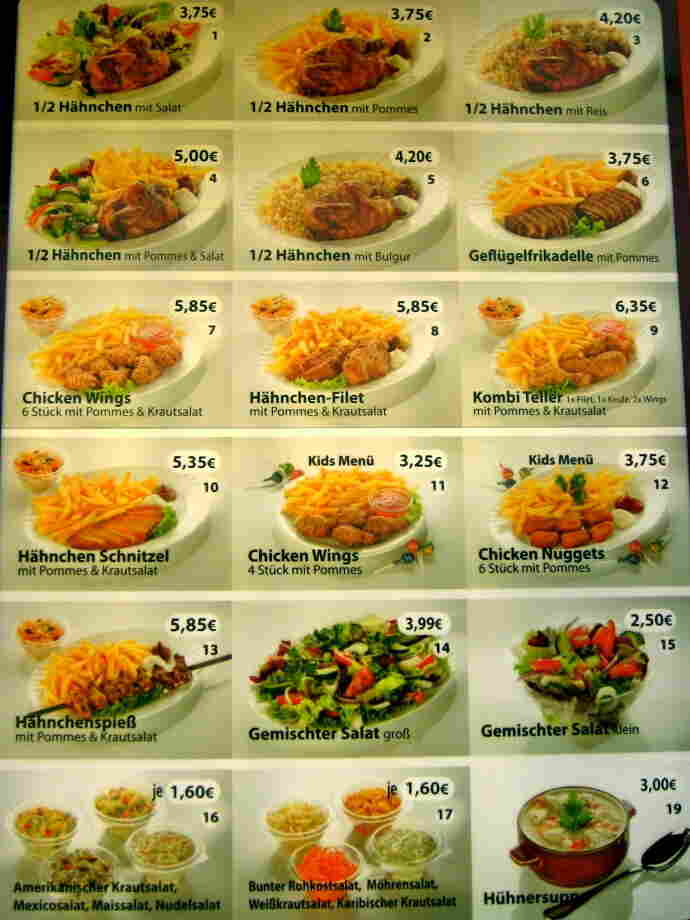 The menu at the new Huehnerhaus restaurant boasts new, different dishes from the small snack shop across the street. Layne Mosler for NPR Berlin hide caption 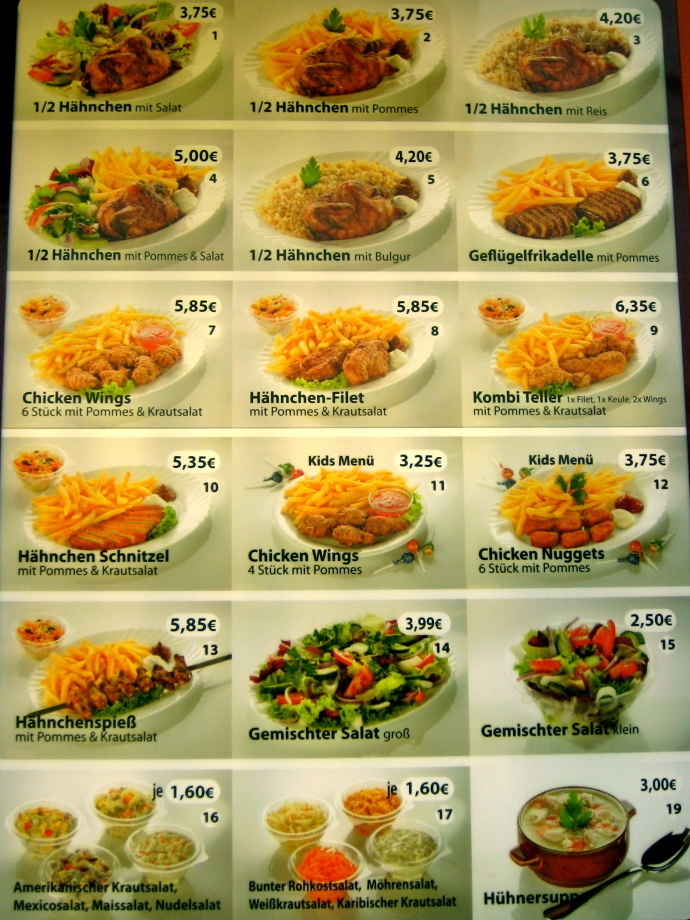 The menu at the new Huehnerhaus restaurant boasts new, different dishes from the small snack shop across the street.

With a split-level dining room and a ceramic fountain, the atmosphere at the brick-and-mortar Hühnerhaus, which opened this past December 8th, may be more upmarket than its sister snack bar across the street, but the prices, and the mixed crowd,are the same.

Apart from its signature rotisserie chicken, the new dishes at the Hühnerhaus restaurant might not be worthy of a pit stop: chicken soup, thickened with rice and seasoned with fresh lemon juice, is satisfying if bland, and hummus is low on tahini and in need of good olive oil.

Despite the complimentary pickled vegetables on every table and the friendly staff, my guess is that Schulz and his cab-driving colleagues will stick to the original stand across the street.

* At the cab driver's request, his last name has been changed.