Accessibility links
'ArtFacts.net': The Methodology And Controversy Of Marek Claassen : NPR FM Berlin Blog Marek Claasson, one of Europe's foremost media entrepreneurs, recently gave a talk in Berlin on ArtFacts.net, an artist-run non-profit that fosters community-building and support for American creatives based in Berlin.

'ArtFacts.net': The Methodology And Controversy Of Marek Claassen

'ArtFacts.net': The Methodology And Controversy Of Marek Claassen

German-born entrepreneur Marek Claassen has solidified a stronghold on the global contemporary-art market. 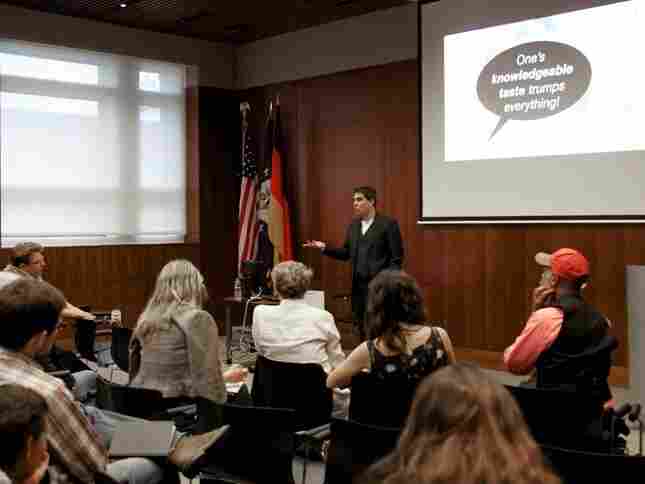 Marek Claassen recently gave a talk at the Berlin Embassy of the United States on USArtBerlin, artist-run non-profit that fosters support for American creatives based in Berlin. USArtBerlin hide caption 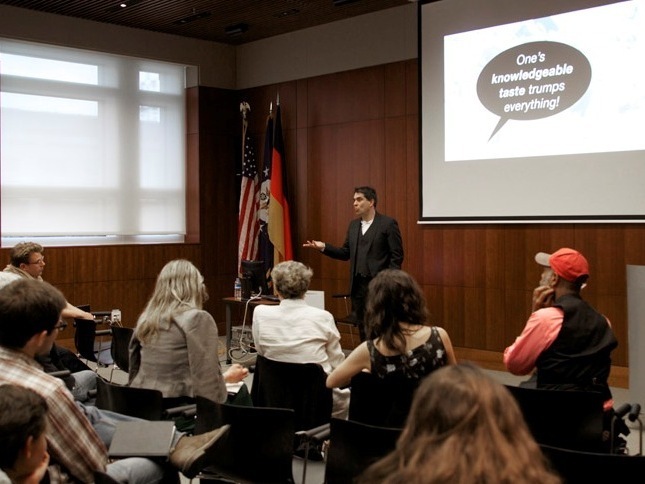 Marek Claassen recently gave a talk at the Berlin Embassy of the United States on USArtBerlin, artist-run non-profit that fosters support for American creatives based in Berlin.

The self-made tool with which he exerts his influence is ArtFacts.net, an online portal that has quickly grown into one of the world's leading references for art collectors, gallerists, and historians.

His service, a database-enhanced website, promotes itself as a means to quantitatively measure the sustainability, and thus most accurately predict future appreciation, of work produced by more than 300,000 prominent international artists.

"Quality," Claassen says, "is the most used term in the art world, rendering its (application for art-object appraisal) effectively meaningless." Rather than art investors basing their decisions on flimsy qualitative hunches, he touts his product a means to let buyers "see art through spreadsheets."

But his methodology, which fails to account for galleries that haven't paid a registration fee with ArtFacts.net, art fairs, publications, or auction sales, has caused a storm of controversy regarding the accuracy of his ranking system.

On May 18th, the Berlin Embassy of the United States, USArtBerlin, hosted a talk delivered by Claassen, a Freie Universität business administration graduate whose 15 years of art-market software development earned him a nomination by the E.U. Commission as one of Europe's foremost media entrepreneurs.

Founded in March 2011, USArtBerlin is an artist-run non-profit affiliated with the Public Affairs Section of the Embassy that fosters community-building and support for American creatives based in Berlin.

Claassen began his discussion aptly, given his U.S.-native audience, by citing American author Robert M. Pirsig, who penned Zen and the Art of Motorcycle Maintenance, a novel first rejected by 121 publishers. It has since become one of the most-sold philosophical texts in the world since it first went to print in 1974.

The allusion allowed Claassen to segue into a discussion about how market economies are, essentially, bets on the future, and how art investment is a gamble on the future of aesthetic judgement. What we consider worthless today could easily be regarded legendary in a half-century.

Consider the Impressionist movement. At the time, "they were punk rejects nobody gave a damn about," Claassen says. Nobody could have anticipated their current fame and post-mortem art-market valuation. Buyers and collectors can only engage in sophisticated guesswork about what will be considered good or bad art in centuries to come.

With ArtFacts.net, Claassen is advancing a standardized method by which to judge whether a living artist's works will continue to harness the "economy of attention" required to be a worthwhile long-term investment. Works that gross the highest level of sales function as a base-marker for how art is assigned worth value; traditionally, it is the auction house that is the arbiter of market quality. Claassen, however, claims auction sales are not a sufficient indicator.

"This isn't enough," he says. "Attention in the cultural world is an economy unto itself, but one that functions with the same mechanisms as capitalism." It's this very economy of attention that gallerists and curators most crave: reputation. In the art world, fame precedes wealth; and this, Claassen says, is a more accurate measure of long-term sustainability.

Based on this conviction, he developed ArtFacts.net. It is governed a complex algorithm that number-crunches four points of valuation in order to rank the worth of an artist: 1) internationality of an artist's reach 2) geographic locations in which artist shows work, with hubs such as New York, Berlin, or London receiving higher ranking 3) prestige of institutions that show artist's work, with places like the MOMA, Neue Nationale Gallerie, or Tate Modern receiving higher rankings and 4) the number of exhibitions in such cities and institutions annually.

When one solely considers sale price, British artist Damien Hirst would be king. As one of the world's richest living artists, he (and his brand identity) sweep sales at auction houses. According to Claassen's computation, however, Hirst doesn't even break ArtFact.net's top-five list. Sales aren't the sole indicator of quality, Claassen says, and a focus on exhibition activities provides for a more-sophisticated quantitative analysis of an artist's long-term market endurance.

He says that 95 percent of artists are forgotten upon their deaths because it's the artist who is actively one's own value-maker. And, while he acknowledges that his system is still crude, as one that is "human-made and thus flawed," he would nonetheless encourage one to reconsider investment in Hirst's latest piece.