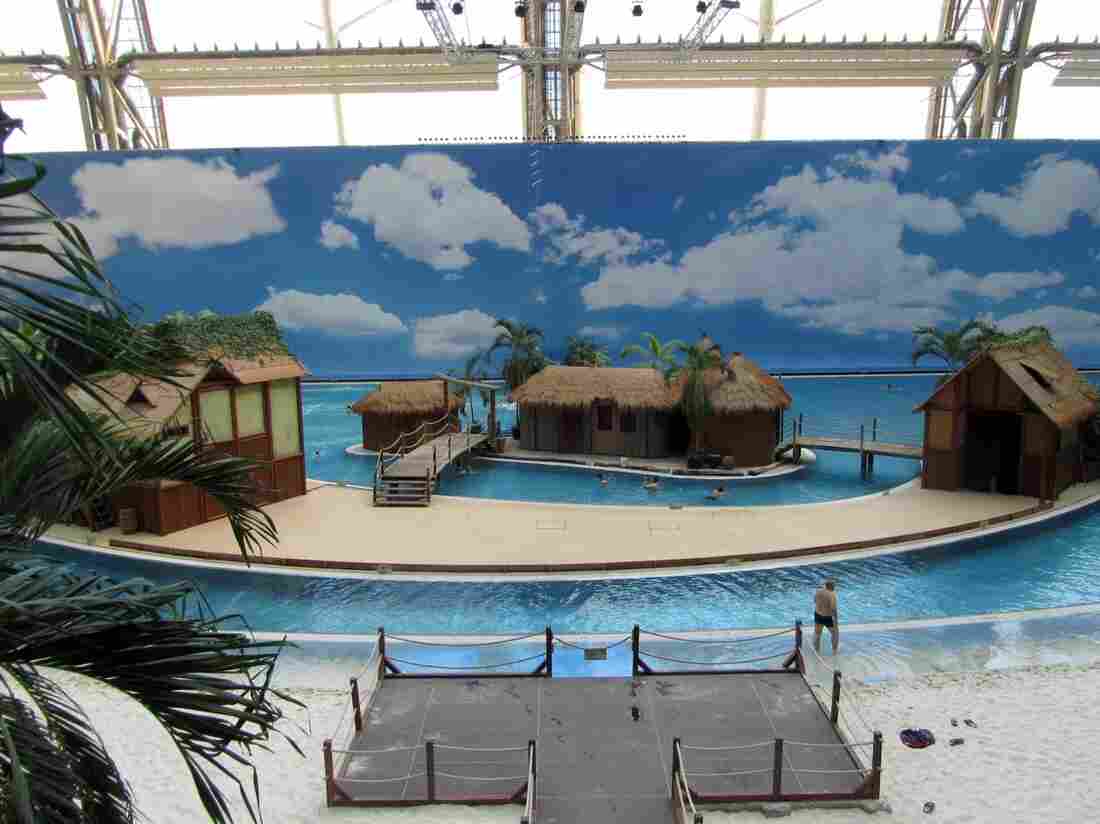 At Berlin's Tropical Islands, sandy beaches line the tropical sea, and a backdrop of a sky makes visitors forget they're inside a dome...almost. Tam Eastley for NPR Berlin hide caption 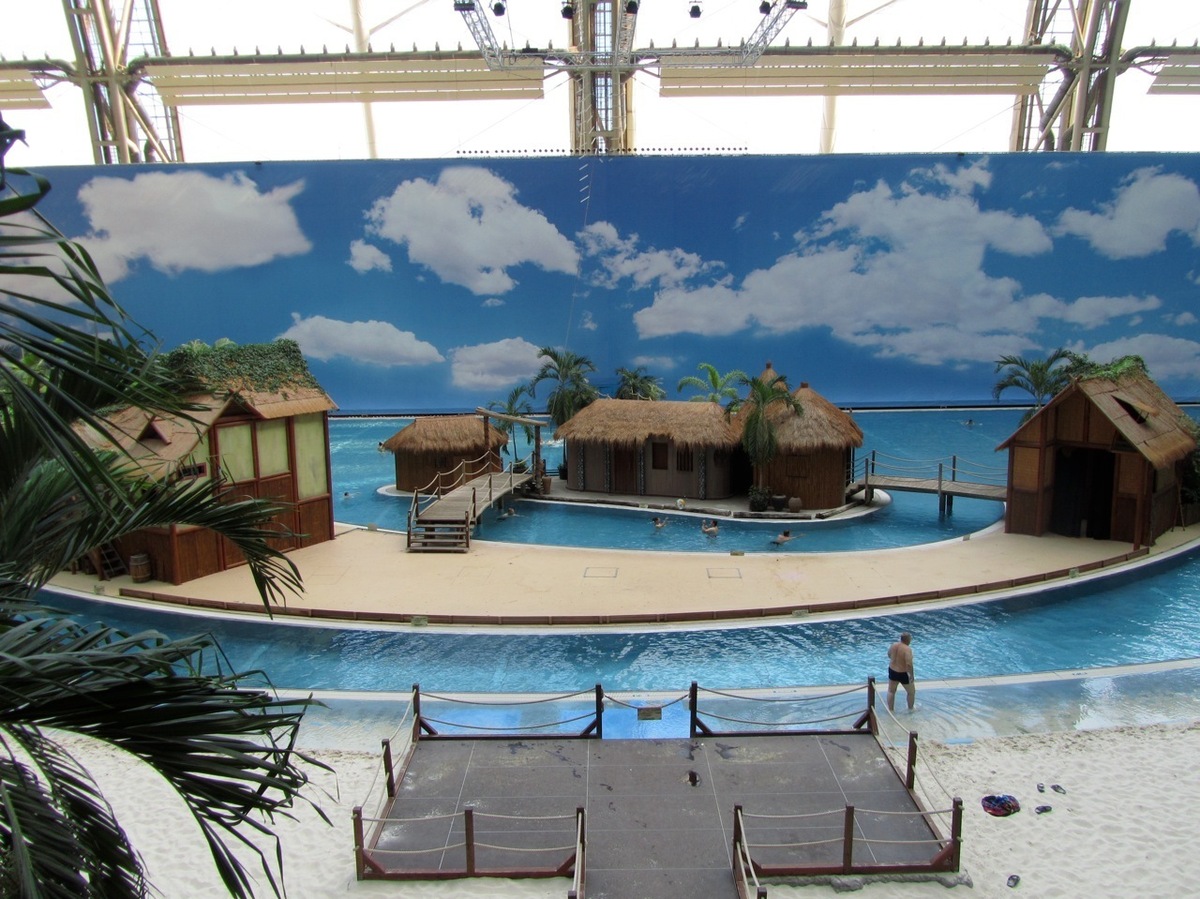 At Berlin's Tropical Islands, sandy beaches line the tropical sea, and a backdrop of a sky makes visitors forget they're inside a dome...almost.

Last year when I was on my way to Spreewald, I saw a sign on the side of the autobahn for Tropical Islands.

Ever since, I've been dying to go. When I bugged my friends to come with me and explained to them what it was, most would raise their eyebrow and give me an odd look.

But a few weeks ago, I finally went, and I just can't get the Tropical Islands out of my head.

The Tropical Islands are located about 60 kilometers south of Berlin and are housed within the largest free-standing dome in the world. It's 360 meters long, 210 meters wide, 107 meters high, and is supported by 14,000 tons of steel.

It stands in the middle of nowhere, so coming across it is a wondrous sight to behold. The dome is enormous, shocking, and majestic; the Statue of Liberty can stand up inside of it, and the Eiffel Tower can lie down in it. If that's not impressive enough, it can hold within it Potsdamer Platz and all of its skyscrapers.

Inside the dome, is, as the name suggests, a tropical paradise. Walking through the door, the sudden humidity and heat is overwhelming. It's 26 degrees Celsius all year round, and the floor is heated. 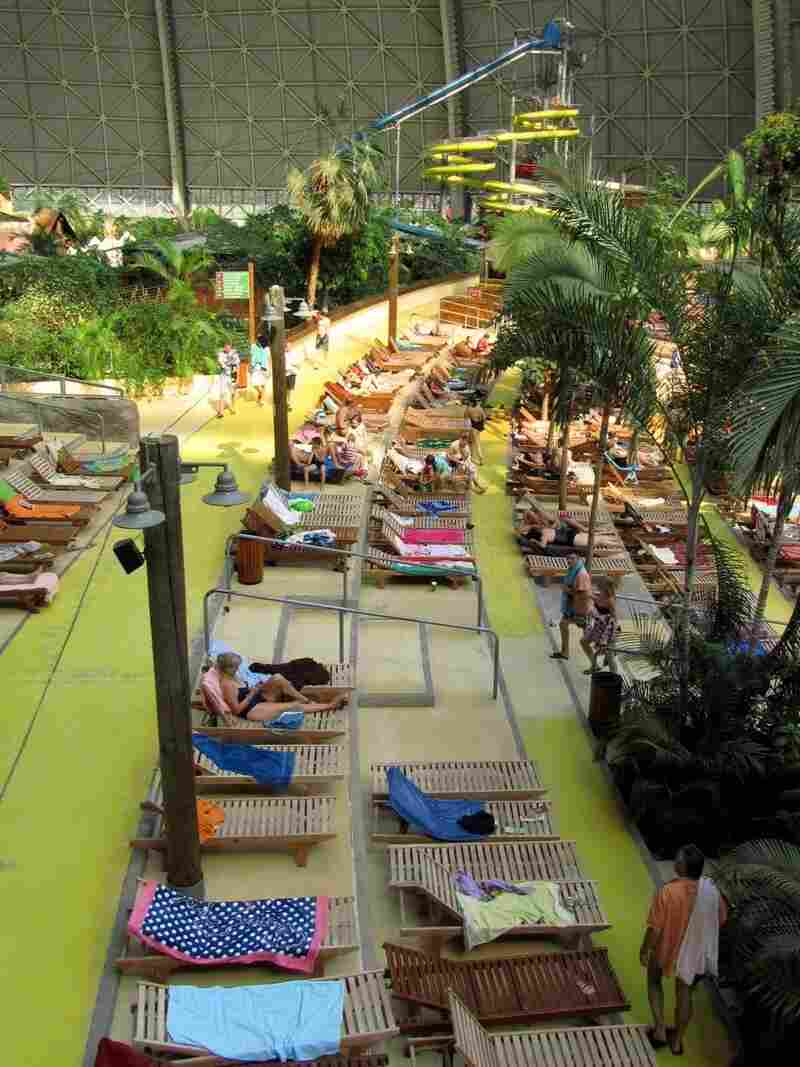 Sunbathing by the tropical sea is a popular activity at Tropical Islands. Tam Eastley for NPR Berlin hide caption 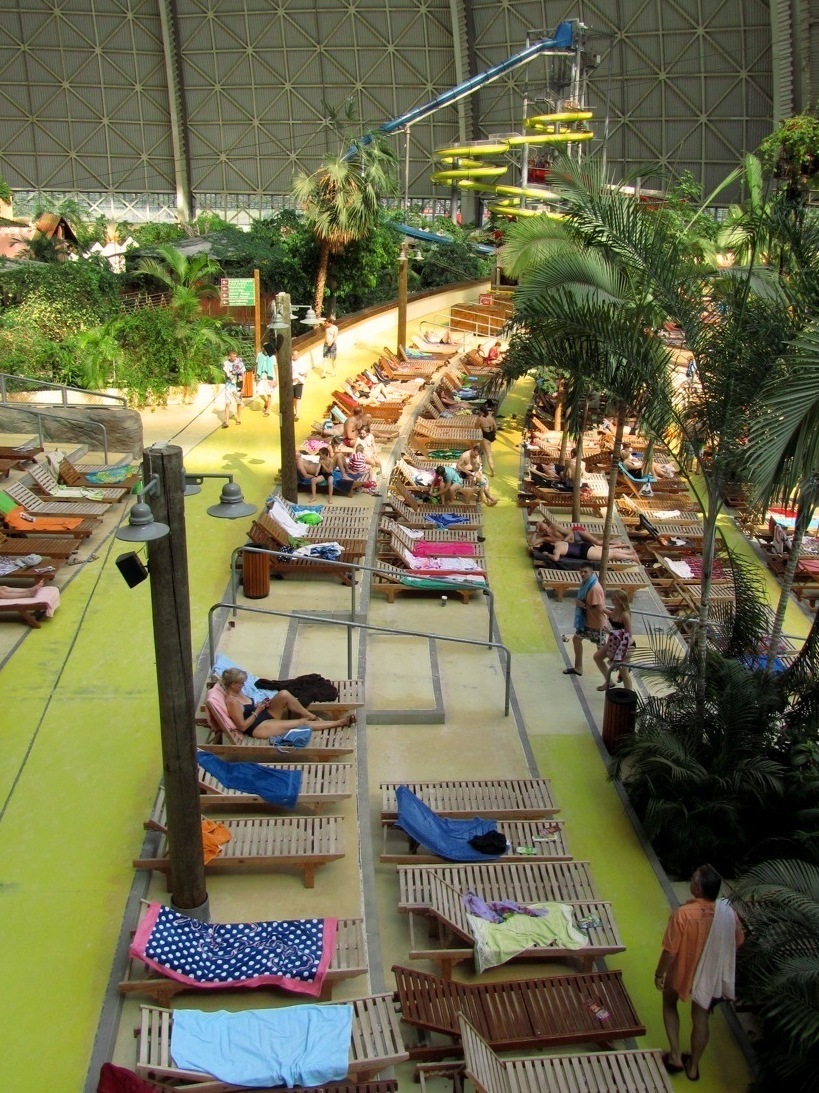 Sunbathing by the tropical sea is a popular activity at Tropical Islands.

From the turnstiles, you can hear the sounds of a jungle, splashing water, birds, and laughter. Through the gates lies an incredibly cheesy and amazing water park.

The land the hangar now sits on was purchased in 1998 by the German firm CargoLifter. The firm intended to construct a heavy-lift air ship capable of carrying over 150 tons of material, but the hangar was built first, and the air ship was never completed. The company went bankrupt in 2002 and Brandenburg was left with an enormous and empty structure.

In 2003, the hangar was bought by the Malaysian company Tanjong and was transformed far and away from its previous life. From concrete to tropics, the dome has a wondrous new purpose.

Inside are two pools. The tropical sea is lined with sandy beaches and dotted with small tropical islands decorated with grass huts. Against the grey hangar wall is a backdrop of a blue sky with a few clouds.

The Balinese lagoon is more adventurous, with waterfalls, a whirlpool, and hot tubs. The trails around the lagoon are spotted with small bamboo lamps, and above the waterfall are huts (available to rent) with laundry hanging out to dry. Cottages surround the lagoon and hammocks hang from their porches. Occasionally, a gold pheasant, a blue breasted quail, or a peacock will saunter by and dip its foot in the 32 degree water.

Surrounding the pools are re-creations of famous architectural wonders from Asia like Angkor Wat (home to the sauna), the Balinese Temple Gate (the largest one outside of Bali), a longhouse from Borneo, and a traditional Thai house. Ponds and canals wind their way around various activity sites, and large Buddha statues are everywhere. 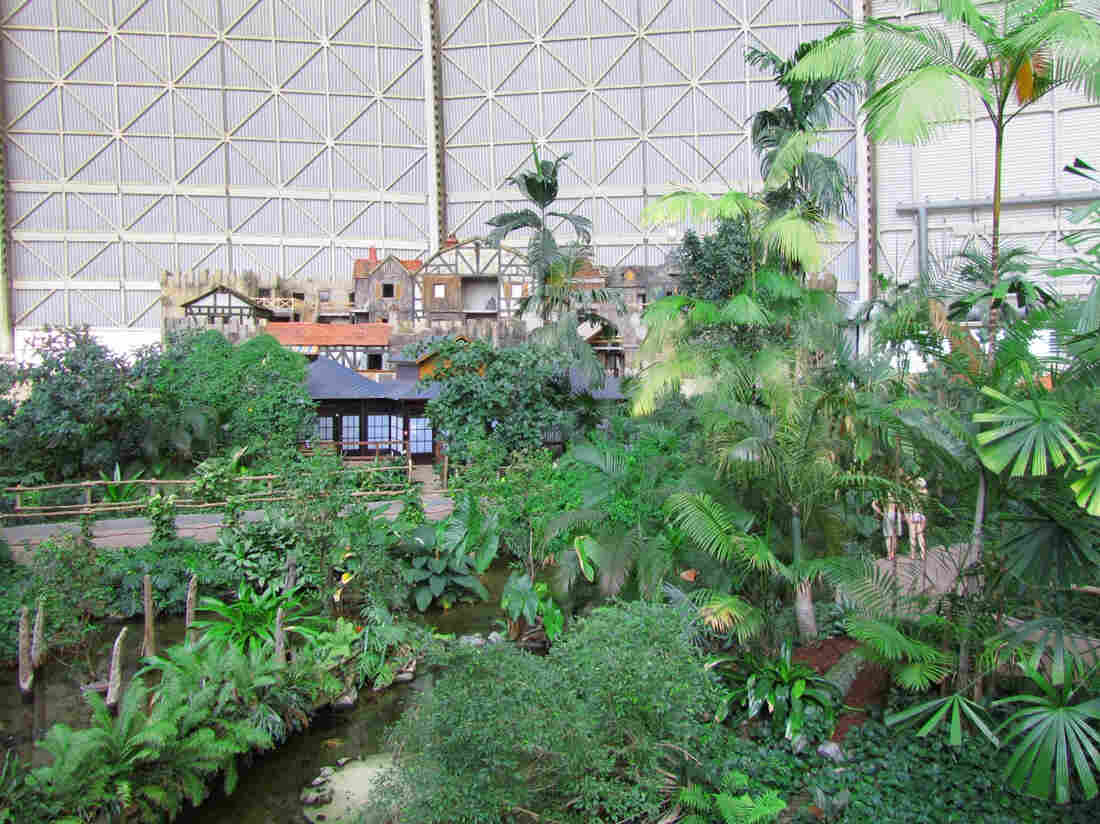 There are over 50,000 different types of plants in the rainforest of the Tropical Islands. Tam Eastley for NPR Berlin hide caption 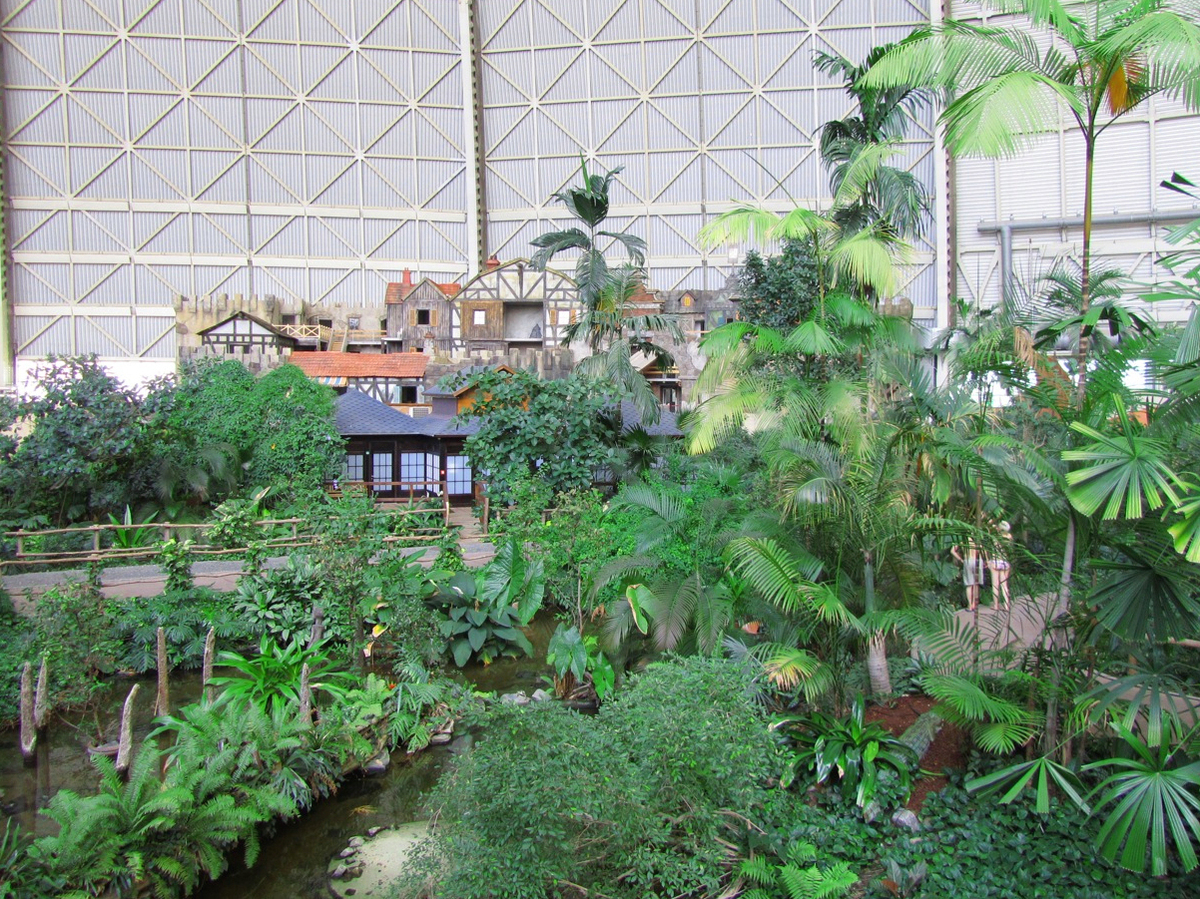 There are over 50,000 different types of plants in the rainforest of the Tropical Islands.

In the middle of the hangar is a tropical rainforest with a kilometer-long upwards snaking pathway. The windows on one side of the dome are transparent, allowing real sunshine to come in and nourish over 50,000 different types of flora, which makes the rainforest the largest indoor rainforest in the world.

Banana trees, palm trees, flesh-eating plants, coffee bushes, and a mangrove swamp grow in equilibrium with one another. Various insects are used to keep the ecosystem under control, and the rainforest apparently survives without the use of chemicals. To compensate for the inability to host larger animals like orangutans, crocodiles, and jaguars, carved and painted wooden animals are placed in the rainforest in odd and unexpected ways. Together with the sight of a water slide in the distance and, of course, an enormous grey dome overhead, the out of place animals draw violent and somewhat silly attention to the fact that you are not, actually, on a tropical island.

Tropical Islands makes for a fun day trip from Berlin, but overnight stays in the dome are also possible, as well as camping outside or townhouse rentals. Before going, I'd heard that food and drinks were outrageously expensive, one friend exclaiming that a bottle of Coke cost five Euro, but I was pleasantly surprised to find that beer was average price and that inexpensive food options did exist, although the vegetarian selection was meager at best. Unfortunately, outside food isn't allowed out of fear it will damage the ecosystem.

By the end of the day, I was worn out and happy from a day of swimming, snoozing in the sand, and wandering around the tropical village. At times, I would see some grey out the corner of my eye, and fear that a storm was rolling in, but then I'd quickly remember that I was inside, the grey was a dome, and that I wasn't on an exotic vacation after all. But for most of the day it felt like I was, and that's all that really matters.

How to get there: take the regional train from Lichtenberg to Brand (approximately 10 Euro for a return ticket) and then board the free shuttle bus that waits for visitors at the station. Admission is 35.50 Euro for adults and less for students and children. Sauna, water slide, and evening shows cost extra.

Important tip: the Tropical Islands are free on your birthday, regardless of age. Just bring ID.