Accessibility links
A Grizzly Bear Story With Too Many Leaps And Not Enough Skepticism : NPR Public Editor NPR relied on an outside reporter's piece claiming a connection between climate change and deadly grizzly bear attacks near Yellowstone Park. In doing so, NPR wandered into a complicated, fraught dispute that provided listeners only one side of the story.

Although it would make story-telling so much easier, most issues are not black and white. This is the case for an NPR interview on whether grizzly bears are killing people because they are starving due to climate change.

Ah, if only it were that simple. It would be a great story.

But the issue was made to seem rather simple in a 5-minute interview last month on Weekend All Things Considered (WATC) entitled: "Climate Change Making the Nation's Bears Hungry?" (That headline, on the NPR Web site, was itself misleading because the interview dealt only with bears near Yellowstone National Park). 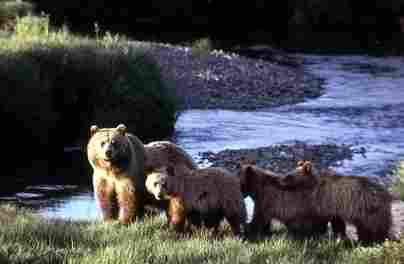 One of NPR's hallmarks is that staffers hunt for stories by other journalists on fascinating issues that NPR reporters may not have covered. An April Men's Journal piece fit that by making the argument that global warming was dramatically affecting grizzly bears' behavior in and around Yellowstone Park's ecosystem.

WATC invited the author, Paul Solotaroff, to talk with substitute host, Noah Adams, about his story.

Solotaroff spent four days in Yellowstone with a lawyer-turned-wildlife activist who works in Montana for the Natural Resources Defense Council, a pro-environment group. His Men's Journal story led with a gruesome anecdote of a sow and her three cubs, "all woefully thin," killing two campers last July. The clear implication was that climate change had destroyed her food supply of fish and pine nuts, so she was desperate for food.

[This implication doesn't happen to be true, according to Chris Servheen, grizzly bear recovery coordinator for the U.S. Fish and Wildlife Service. More on this later.]

The problem with NPR's interview is that it wandered into the middle of a long-standing, intense dispute between the government and environmental groups over the dangers to grizzly bears resulting from climate change's manifestations. This is a complex issue where different people studying the same scientific research interpret it very differently.

NPR listeners are entitled to more nuance than these lines from the introduction to the interview with Solotaroff:

"In Yellowstone, the whitebark pine trees are affected by the increase in temperature. The whitebark seeds are a basic food for the grizzly bears. Last year, grizzlies attacked several visitors, killing two."

The 5,000-word Men's Journal piece explored the complex relationship between climate change and its impact on the bears' food supply – from a definite environmentalist point of view.

"We wanted to run the article through Elizabeth, but she wasn't available and we were on a short deadline," said Martinez in an email. "So, we continued our due diligence and contacted Yellowstone ourselves."

When Shogren did her story on what's happening to the whitebark pines, she spent weeks interviewing experts and reviewing scientific journals.

Adams, who was prepped by the WATC staff, challenged Solotaroff's research only once, saying in the interview:

"Now about global warming, we contacted the Park Service. They say there have indeed been bear attacks in the park, and yes, there is a pine beetle infestation, but that these issues are too broad scientifically to connect directly to climate change. How do you feel about that?"

Solotaroff: "It's nonsense. Every reasonable scientist, every reasonable arborists, agrees that there is a tightly knit connection between the availability of food supply and the behavior of these bears."

Not every scientist. Servheen has a PhD in wildlife biology, and took strong exception to WATC's interview.

"The complaint I have is NPR featured this story as if it were factually correct and you interviewed this guy as if he had knowledge about grizzly bears in the Yellowstone ecosystem," said Servheen. "Neither of those things is true. All of us look to NPR as a source of factual information. That was the most egregious thing I've ever heard on NPR."

Yellowstone's superintendent, Servheen, and the lead grizzly biologist for Montana's department of fish, wildlife and parks complained in a letter to Men's Journal that there are "multiple factual errors" in Solotaroff's story. He also complained to NPR.

There were not as many errors in NPR's much shorter interview, Servheen said. I asked him to annotate the NPR transcript.

Solotaroff told NPR that the mother bear was "tragically thin." But in fact, Servheen said she was within the normal weight range for a female with cubs in July. Solotaroff said the sow smelled fish cooking, but the attack on the campers occurred at 1 a.m. and an investigation indicated no cooking took place at that time.

Solotaroff also told Adams that another reason the grizzlies are "starving" is that fish are dying of heat stroke because the streams are so warm because of climate change.

"The fish that was used by approximately 10 percent of Yellowstone ecosystem bears for about 3 weeks in June each year is cutthroat trout," wrote Servheen. "Cutthroats have declined in Yellowstone due to the illegal introduction of lake trout into Yellowstone Lake. This decline is not due to 'rising temperatures.'"

Servheen and his colleagues challenged other aspects of Solotaroff's original story; these are some of the elements that were also mentioned in the NPR interview.

Martinez took the Park Service's concerns seriously. He offered them a chance to respond, but they never replied.

I followed up, and got this response:

"We have struggled to come up with an appropriate approach which will help us undo the harm we believed was done by the original article and your subsequent coverage," said Al Nash, Yellow Stone Park public affairs officer. "To our mind, a point-by-point rebuttal may ultimately be satisfying, but is unlikely to meet our desired goals."

NPR did run a correction on-air and online that the mother bear attack had occurred outside –not in – Yellowstone. "As we mentioned during the interview, officials at Yellowstone still maintain that despite Mr. Solotaroff's evidence, there is no direct link between climate change and the behavior of the bears in or near Yellowstone Park."

Park officials, said Servheen, objected to the use of the word "evidence" in the correction, as they don't think Solotaroff provided any scientific evidence.

They also don't deny the impact of global warming. But they won't go as far to say that climate change has destroyed the bears' food source, causing bears to kill people because they are "starving."

"Looking back on it," said Adams, "I wish I asked, 'How do you know the bears were hungry for people? And how do you know they depended on the white pine seeds?' That seems to be the crux. I wasn't as adversarial as I should have been."

This was a fascinating story but it needed more of the government's perspective. NPR needs to be very careful when using an outside reporter's story – and find different ways to vet it. NPR ultimately gave Solotaroff a megaphone about an issue he is obviously passionate about, but failed to explain adequately how complicated the issue is.

NPR has a deep bench on many subjects, and this is one. Shogren should have been consulted for guidance. In this age where we are all tethered to technology, she was reachable.

This incident also illustrates the inherent difficulty of tackling complicated, controversial subjects by interviewing outside reporters whose work NPR cannot vet or verify. NPR often interviews outside journalists, and usually it's not a problem. But when a problem does arise like this one, listeners do not get the full story.