Accessibility links
Worthy Cause, Controversial Funding Source : NPR Public Editor George Soros' foundations gave NPR $1.8 million for a local-national project to improve state government coverage. But Soros is so identified with liberal causes that the grant has made some listeners, some staffers and some other public radio supporters uncomfortable. The concern is a perception of a conflict.

NPR's first show, All Things Considered, turned 40 this month. Over the decades, NPR has added shows, exponentially increased its audience and become one of the most trusted news sources in the country.

If you think of credibility as money in the bank, NPR's account is healthy and robust – at least among its audience. 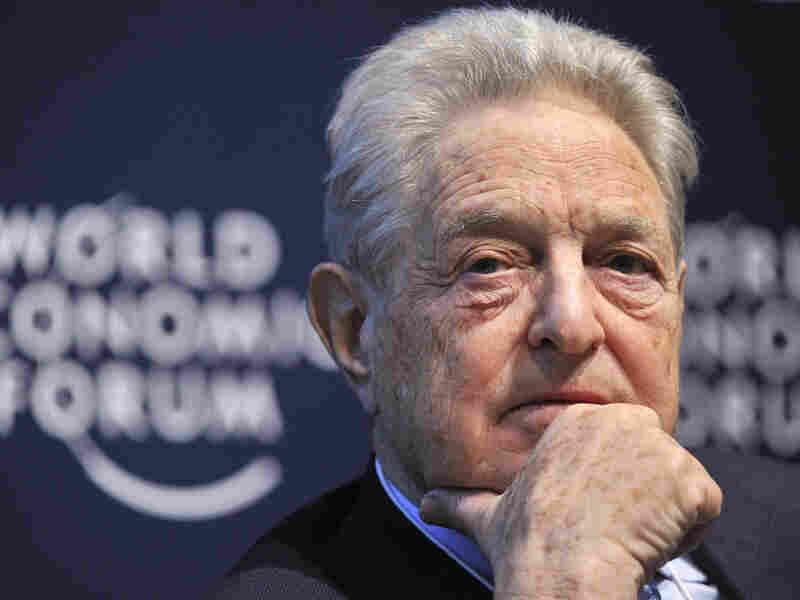 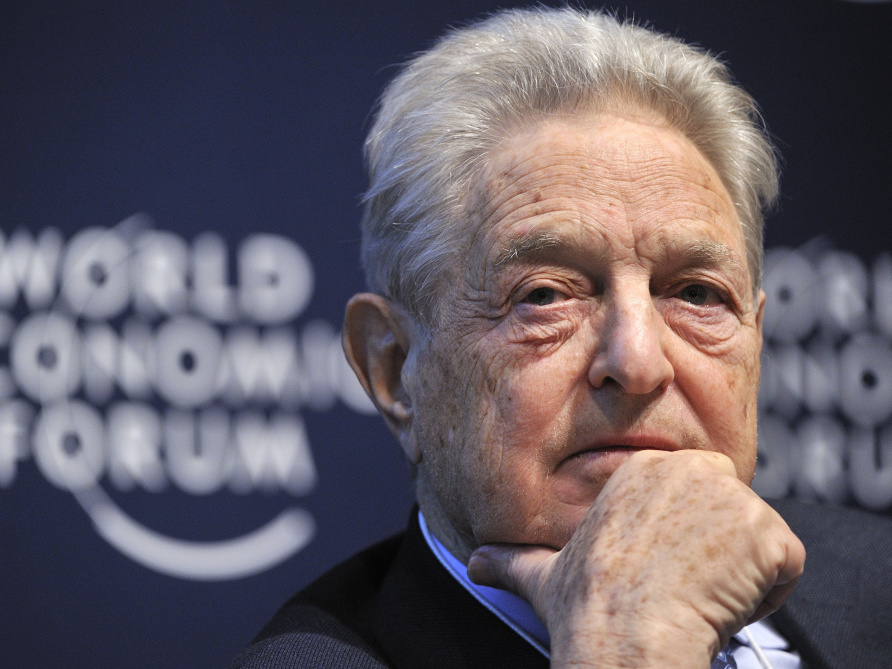 But the organization made a judgment last fall that taps into that credibility account. The decision was to take $1.8 million from the Open Society Foundations. It's funded by left-leaning billionaire financier-philanthropist George Soros, who made his fortune in hedge funds and currency speculation.

The money is for a worthy purpose.

NPR is using the two-year grant as seed money to start a local-national initiative, known as the Impact on Government project. Eventually, the plan is to have two public radio reporters in every state keeping tabs on state government issues that are woefully under-reported by the media. This is to be a multi-media project for radio, the Web and social media.

So far, NPR has chosen public radio partners in eight states to participate in a year-long pilot phase. The project is expected to go live next month.

If it's successful, 17 more states will be phased in the second year.

The Open Society grant was announced last Oct. 18 – ironically the same day that then NPR analyst Juan Williams made his infamous remark on Fox News about feeling nervous when he sees Arabs in Muslim garb on airplanes. He was later fired.

The timing was awful, as the poorly handled firing led to a firestorm of criticism from the right – many whom believe NPR caters to a liberal audience and that the government has no business funding public radio.

Adding to this, Soros' foundation also announced last October a $1 million grant to Media Matters, a liberal activist group with a goal to hold Fox News (no fan of NPR) accountable. Soros has also given millions of dollars to other liberal groups, including MoveOn.org and the Center for American Progress.

Criticism has not been limited to the right. "No news organization should accept that kind of check from a committed ideologue of any stripe," wrote media critic Howard Kurtz in the Daily Beast "Even if every journalist hired with the cash from Soros' foundations is fair and balanced, to coin a phrase, the perception is terrible."

When top executives told NPR staff about the Impact of Government project, they said the money came from the Open Society Foundations but offered no other funding details.

"I remember the email announcing the Impact of Government project only mentioned the Open Society Institute," said one staffer who spoke on the condition of anonymity for obvious reasons. "My cubicle mate immediately said, 'Isn't that Soros?' We Googled to confirm...and were appalled that his name had not been included, as if the company didn't think it was important or were trying to hide something."

Since that time, a deep current of concern has run through the newsroom about taking money from someone with a well-known, documented political agenda supporting Democrats and Democratic causes. Soros has been increasingly partisan since he announced his determination to defeat then-President George W. Bush in 2004.

Soros' foundation has donated to NPR before, though not in such a large chunk. Typically, Soros does not request on-air funding credit. "This is a long-standing policy," said Maria Archuleta, an Open Society Foundations spokesperson. "It's not about getting our name out there. It's about the issues we support."

There's nothing unusual about that. NPR has other funders who don't want to trumpet their name on air.

But this became an issue in February when conservative activists posing as a Muslim group entrapped an NPR fundraiser by secretly recording a phone call.

"Some of our donors have chosen not to use the on-air credits," fundraiser Betsy Liley told the faux Muslims who offered NPR $5 million. "So George Soros and the Open Society Institute gave us $1.8 million and they have decided not to use on-air credits because of what is happening with Congress."

[CLARIFICATION: Liley gave incorrect information in this call. The Open Society never suggested that it was declining on-air credit because of Congress or Williams.]

Few NPR staffers I spoke with – and since I work in the building, I have spoken with dozens of them – question the need for tighter scrutiny of statehouses, as planned by the Impact of Government project.

They just privately wish the money hadn't come from Soros. (A few do note that NPR takes money from lots of foundations and are not bothered.)

At a staff meeting last fall, an editor asked former CEO Vivian Schiller, who was involved in getting the money, about the public perception created by NPR's taking money from Soros' foundation. In response, Schiller cited the "firewall" between donors and the newsroom.

The Open Society people "understand that we are completely independent," said Schiller. "They will hear the stories on the air along with everyone else. We will have no editorial dialogue with them about these stories. There is a complete separation."

Schiller said she was not troubled about perception and insisted NPR shouldn't have a political litmus for funders.

"I don't know that we need to draw lines saying 'If you have a point-of-view you can't give us money,'" said Schiller. "Where we draw a line is, 'You cannot give us money to pursue your agenda.'"

NPR executives say they gave a lot of consideration to taking Soros' money, determining that it would be wrong to turn down money because of someone's political beliefs and based on how it looked.

"OSI Foundations met NPR's qualification criteria for funders," said Dana Davis Rehm, NPR's spokesperson. "They understood and accepted our terms – chief among them the prohibition of any effort to influence editorial decision making. Our acceptance of the grant was based on principles of independence and fairness, and we stand by it."

Some stations have expressed concerns about taking money from someone labeled a left-wing philanthropist. Chief among them was WBEZ in Chicago, one of the biggest public radio stations in the country.

When NPR invited stations to apply, several in Illinois were excited about the project, said WBEZ President and CEO Torey Malatia. But WBEZ wanted no part. Other stations in Illinois applied as a consortium but did not get funding in the pilot project.

"The last thing I wanted to do is hurt my colleagues," said Malatia. "But this is a very clear crossing of the line, at least in perception even if it doesn't happen in reality. Perception is our currency. It's what you talk about during pledge drives. It's the emotional trigger you hope can be pulled when you are talking with philanthropists about your independence. Perception is just as important as reality. It doesn't matter how many controls you have. The minute you have to explain away the problem, you are in trouble."

On the other hand, Soros' foundations gave 34 grants from 1997 to 2010 to local NPR member stations and specific programs that have totaled nearly $3.4-million, said the foundations' Archuleta. Recipients included WNYC and Minnesota Public Radio.

NPR has said that the Open Society Foundations will not be the only source of funding, and that the project has received support from a diverse mix of sources. NPR would not provide me with the names of other funders, however.

I understand NPR has a vibrant firewall and I'm confident that it will be stand with this project. Ken Rudin is one of NPR's most-respected political journalists and he is a senior editor for the two-year project. I also know that Soros' foundation is well-known for taking a hands-off approach.

But that won't stop critics.

The right, in particular, has demonized Soros for the money he has given to other journalism organizations focused on ethics, good journalism and transparency such the National Association of Hispanic Journalists, the Committee to Protect Journalists, Center for Public Integrity, ProPublica and the Center for Investigative Reporting.

"NPR took $1.8 million from a man who also spent $27 million trying desperately to unseat President George W. Bush in 2004, yet NPR still claims to be neutral," said Dan Gainor of the conservative Media Research Center. "Conservatives know that isn't true. The Soros money just proved it. Will NPR deploy some of that new-found wealth to investigate Soros' global empire? No, he signs the checks." [Gainor's Soros pieces.]

Gainor's position carries the title of T. Boone Pickens Fellow, and is affiliated with the Media Research Center. Pickens is as well-known on the right as Soros on the left. Wealthy conservatives also fund media groups. In fact, the Franklin Center for Government and Integrity also has a statehouse project that funds reporters to improve state government coverage. The organization is funded by private donations which they do not make public.

Until now, I have stayed away from this topic because I wanted to see if NPR's audience and staff were concerned about the grant. What I have found is that people keep asking me about the Open Society donation. The other day, a Wall Street Journal reporter asked me about it, in a whispered, concerned "is-this-alright?" tone that I often hear.

"So you were bought off by George Soros for $1.8 million," wrote Danny Thomson, of Carefree, AZ on May 13. "I guess you don't care about a little thing called Ethics. One more reason to defund NPR."

I am disappointed that NPR would not share the names of other donors for the Impact of Government project if they have them. They said they intend to publicly launch the project in June, and want to control the rollout of information, including the names of other funders.

Diversification of funders would go a long way toward diluting any suspicions about a Soros connection. The sooner NPR can provide a varied list of funders for this project, the quicker valid concerns about perceptions and reality will diminish – if not go away.

DISCLOSURE: Until Wednesday, I was on the board of the Organization of News Ombudsmen, which is an independent group of 60 news ombudsmen in 17 countries. ONO is a cash-strapped group that meets annually to talk about issues unique to the role. It receives money from Soros' foundation, which this year provided translation in Spanish, English and French at the 2011 conference in Montreal. ONO has a budget of about $30,000 and would welcome money from any group wanting to support media transparency.