Accessibility links
As Gamblers Gather, Thailand's Child Boxers Slug It Out : Parallels Child boxing in Thailand is denounced by human rights groups, but it remains popular in some rural areas where it attracts large crowds betting large sums on the young fighters. For fighters like 9-year-old Chai Lorlam, the pressure to win is intense.

As Gamblers Gather, Thailand's Child Boxers Slug It Out

As Gamblers Gather, Thailand's Child Boxers Slug It Out 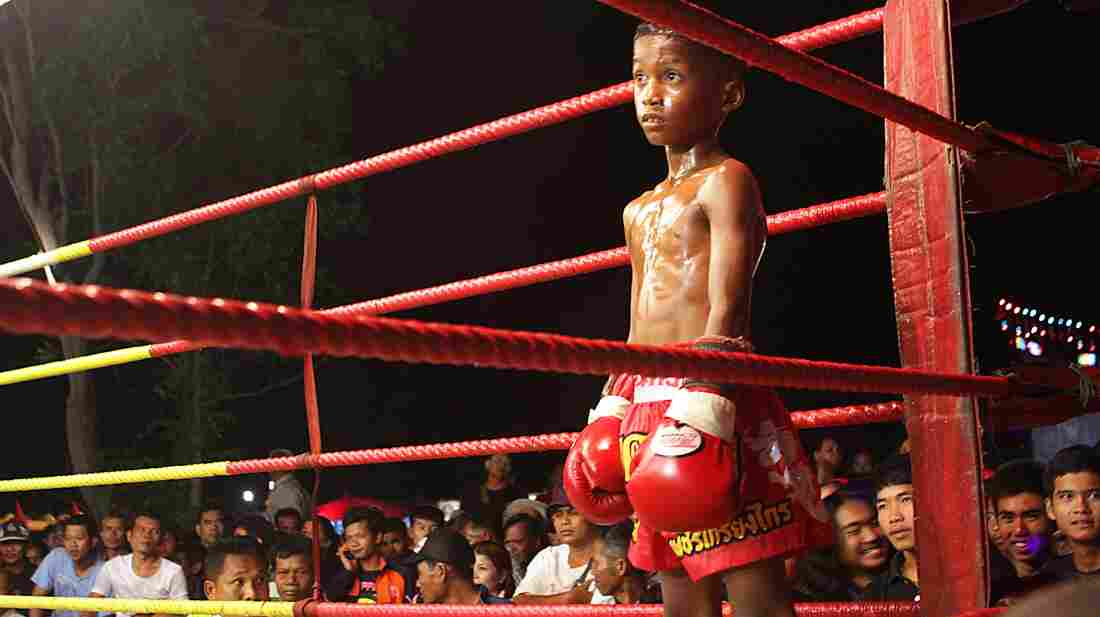 Chai Lorlam is a 9-year-old, 50-pound boxer in northeastern Thailand. The young fighters go through intense training for fights that are held for the benefit of gamblers who often wage large sums on the outcome. Chai is shown here at a recent match. Morgan Hartley for NPR hide caption 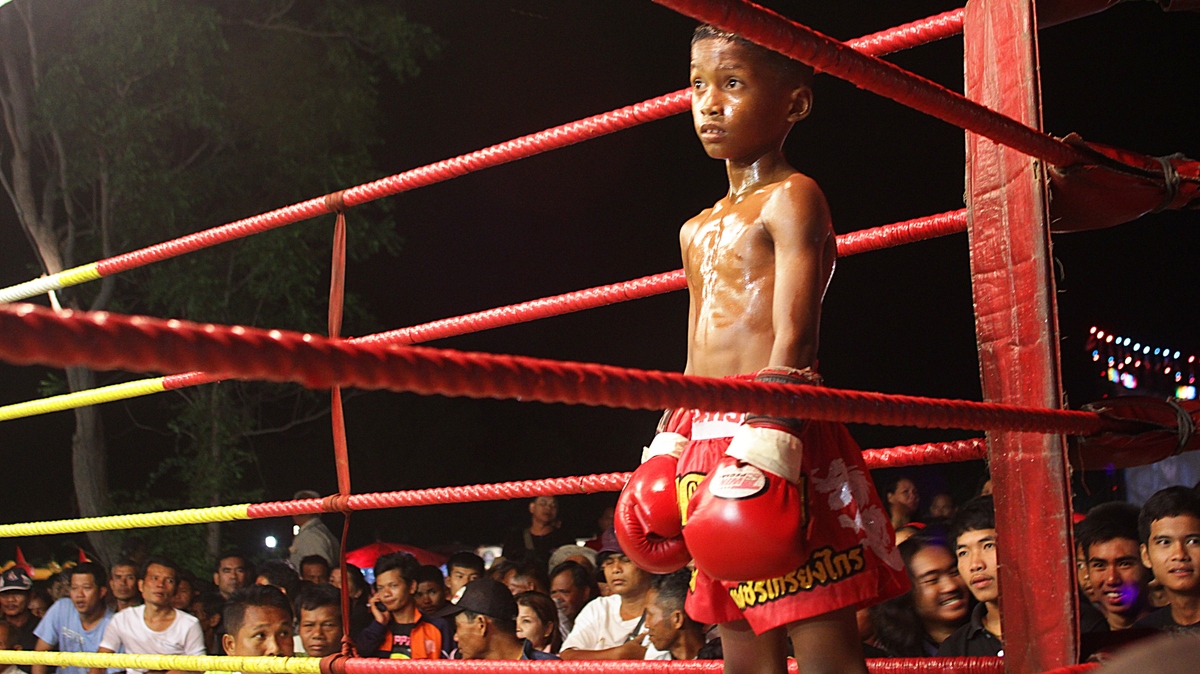 Chai Lorlam is a 9-year-old, 50-pound boxer in northeastern Thailand. The young fighters go through intense training for fights that are held for the benefit of gamblers who often wage large sums on the outcome. Chai is shown here at a recent match.

Under the fluorescent lights of the boxing ring, the boy can barely see out beyond the elastic ropes that surround the fighting stage. The crowd and the festival that press in around him are shadowy outlines. But the boy can hear them.

Chai can hear his trainer shouting last-minute reminders about the basics of technique. He can hear the excited laughter of other kids his age, who have squeezed their way to the front of the spectators after ditching carnival rides and balloon dart-throwing games and fried rice-cake stands to watch his fight. And he can hear the gamblers — the gamblers who shouted "Two to one — blue!" "Three to one — red!" They are betting on the odds he'll win the fight.

Chai knows he has to win the fight.

There's the reputation of his gym to uphold, and all the fighters and trainers who have become like family to him — there's the pride of his community to defend — many of whom he knows to be in the crowd.

Child boxing in Thailand is a tradition that has a long history. The child boxers bring prize money back to their families. And Chai's village and trainers, yelling advice and pushing up against the barricades of the ring, don't come just to cheer for him. They come to bet on him.

A Way Of Life

Child boxing has brought Thailand the ire of human rights activists, who see it as dangerous. But in Isaan, the northeastern and poorest region of Thailand, child boxing is a way of life.

It provides income to families that would otherwise have to rely on their rice paddies, athletic discipline in a place where drugs and gangs are rampant, and a way out of poverty for some children with few options.

This style of fighting, known as muay thai and sometimes called the "art of eight limbs," uses the knees, elbows, fists and feet as striking points. It has been practiced as an art form and fighting technique in Thailand since the 12th century.

As the noise multiplies around him, Chai bows obediently toward his trainer and turns toward his opponent. They already know each other. It's the third time the 9-year-olds have met in the ring, and this match is the tiebreaker. 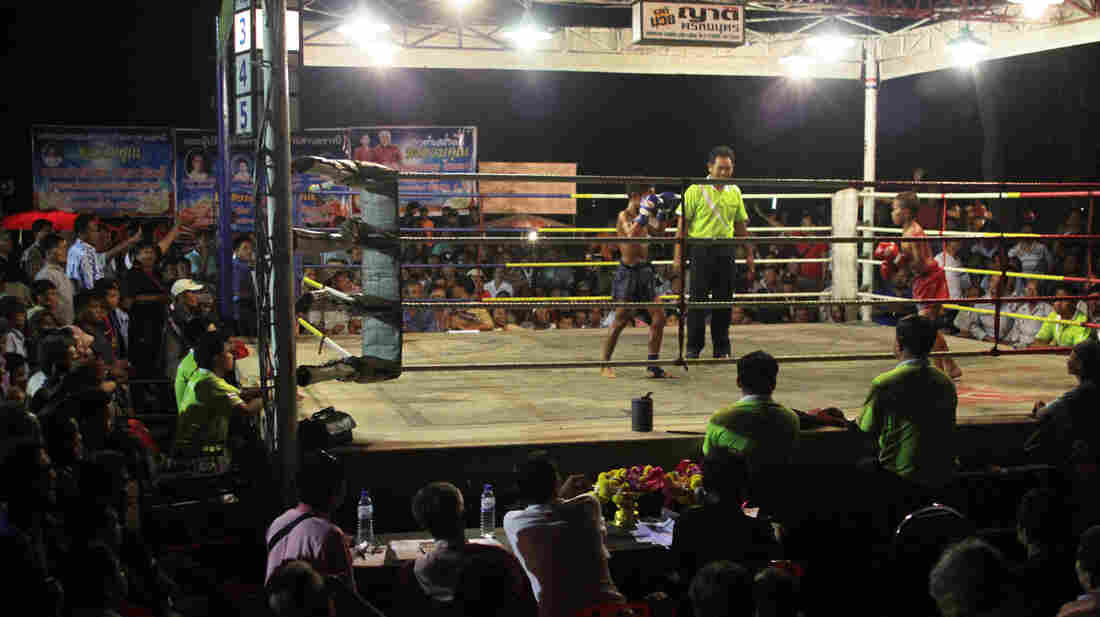 The fights attract large crowds from surrounding villages that bet heavily on boxers from their areas. This places tremendous pressure on the young fighters. Morgan Hartley for NPR hide caption

On a 6-mile morning run at dawn, Chai struggles to keep pace with the older fighters. He sees the dark outlines of Phetsiam, his older cousin, and Taro, the owner's son, pull away from him down the side of the highway.

The plains are flat as pancakes and extend to the horizon line in every direction. The world seems an endless expanse of rice paddies.

The business of rice is all some villagers near Ban Ka know. It is humble work, and for a long time agriculture was the only work available in Isaan. That was a time when many saw boxing as the only way out. As the Thai economy has boomed, more opportunity has come. More kids are going to universities, or moving to Bangkok, or getting grants to go abroad or start businesses.

But Chai is training because the boom has yet to trickle down to Thailand's poorest. If Chai were not training, he would be in the rice paddies. 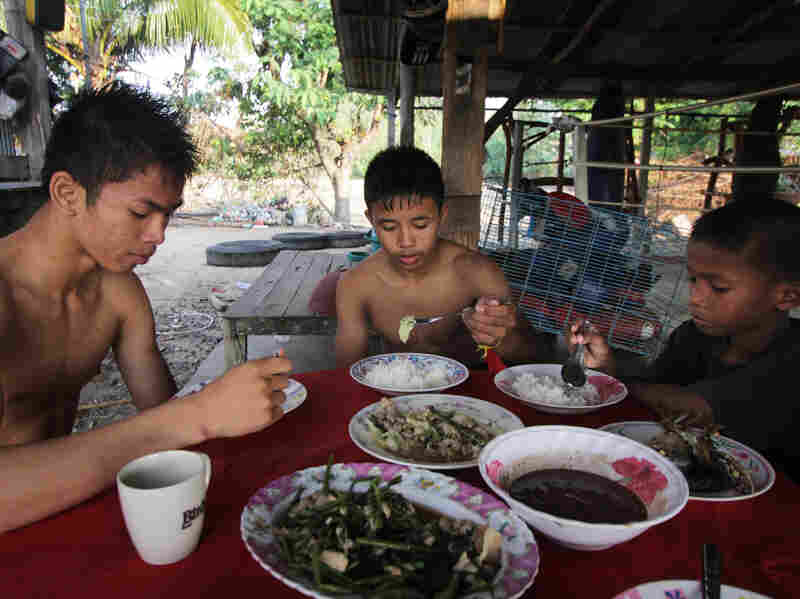 Chai (center) is shown at breakfast after his morning training with other fighters. He spends most of his day at the gym. Morgan Hartley for NPR hide caption 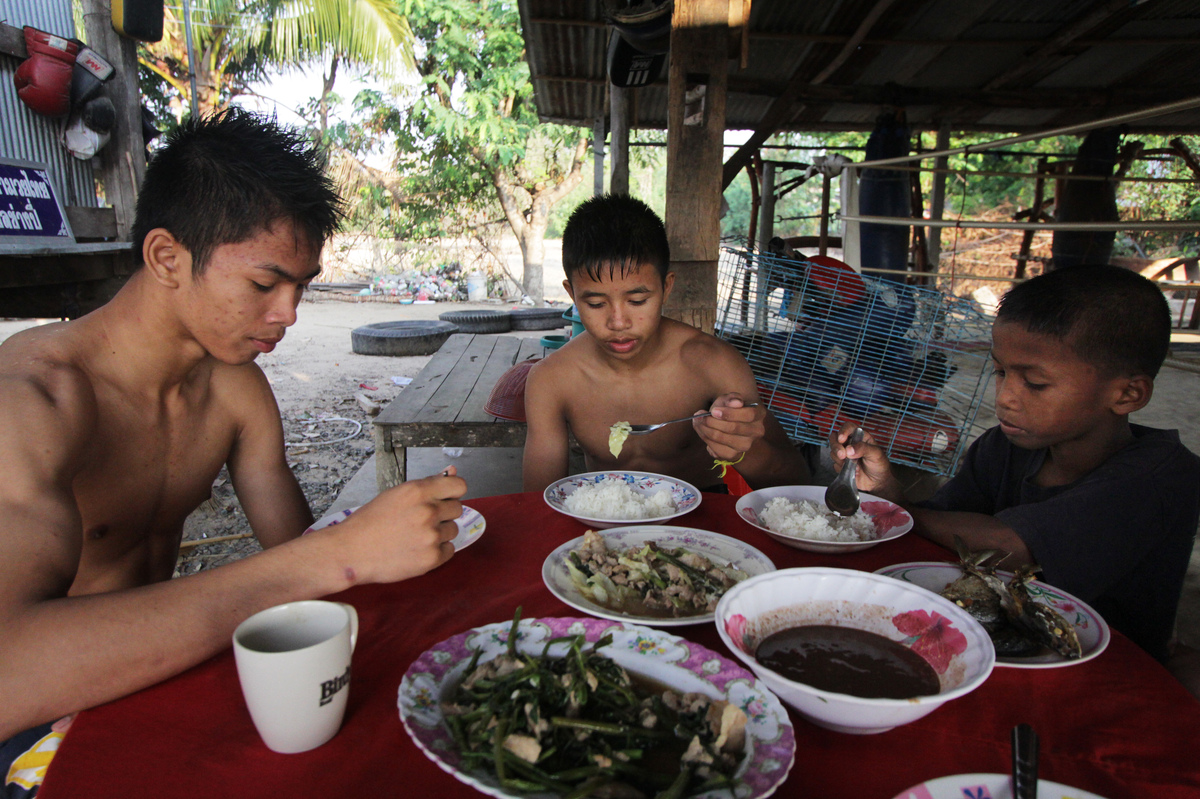 Chai (center) is shown at breakfast after his morning training with other fighters. He spends most of his day at the gym.

After a quick breakfast of soft-boiled eggs, stirred and chugged Rocky style out of a clear glass cup, Chai joins the other boys at the punching bags. More have arrived since he returned from his morning run. Even without a chaperone, the fighters are training themselves.

Every rural fight and temple festival might have the ticket to a Bangkok invitational somewhere in the crowds — and that's where a young fighter can start making real money. The promoters are watching. It's only one step from the invitationals to Lumphini, the acropolis of muay thai, where the teeming masses of the capital start putting big money on the table, and the crowd roars with real fervor, and the television cameras roll. Competition is stiff, but a pro fighter can make as much as $40,000 a year.

The kids at Chan's Gym balance the pressure with fraternity. They are a family. As Phetsiam stops his drilling to help hoist Chai onto the pullup bar, he gives his cousin an encouraging grin.

At an afternoon training session, Chai's parents are absent — and always have been. They divorced around the time of his birth and sent him to live with his grandparents in Phetsiam's village. At the recommendation of the cousin's family, the grandfather sent Chai to live with Chan at age 7 and begin his training as a muay thai fighter. In some ways, the stakes are higher for Chai than for either of his brethren in the muay thai family, though he himself may not realize it. The gym gives him everything: food, shelter, a path to success. It is an unspoken truth that he must support it with victories. It is also the only way he can help his grandfather, who is 75 and will not be able to labor in the rice paddies much longer.

In a sport that's more about the gambling than the show, inside knowledge on fighters means better odds and more money. Even for the matches between the youngest fighters — 7- and 8-year-olds — huge amounts of cash can trade hands. While some bets are as low as 100 baht ($3.50), they can soar to 50,000 ($1,700) baht or more.

The betting is a chaotic and unorganized process. There are no official bookies setting odds and taking money. Instead, individuals bet against each other, setting the odds with a system of complicated hand signals that are exchanged from opposite sides of the ring.

The fighters' trainers, and the fighters' families, are among the high-stakes bettors in the crowd. The betting is how the families and the trainers support themselves. In tightknit communities, neighbors, relatives and friends will all come out and support their hometown fighters. That's the case with Chai and Phetsiam, who've attracted half their village to the fight.

The referee slices the air with his hand, and the bell rings with a single tap. The two boys bounce around for 30 seconds, getting the feel of each other with jabs and forward toe kicks. Neither throws anything with power. Then Chai decides to charge. A jab and a missed punch. A lean in for the clinch. The two fighters are flailing about the ring, bodies twisting around each other as they try to open up the other's abdomen for the knee.

Chai lands a few, his opponent lands a few. The crowd roars — the fight is active and the fighters well-matched. The gamblers in the neutral corners are shouting, hand signals are flashing, and the bet volume starts to go up.

Ding! The round is over.

The trainers are in the ring almost before the bell stops vibrating. They put down a big metal pan with a stool on top of it. Two take care of Chai. They pour ice water on him, massage his legs, stretch his arms. A third yells strategy. Chai is calm and passive, nodding at his trainer.

Round 2. This time there is no hesitation. The boys go straight for each other. Chai's opponent goes in hard for some punches, but Chai dodges them. It's his opportunity; he comes in with his own attack. A left. A hard right. His opponent reels, drops his guard. Chai swings his right shin into his jaw.

The kid is out cold, dropping like a sack of produce. Trainers swarm the ring. The ref raises Chai's arm and swings him around victoriously, and half the crowd goes wild with cheers. But only a few bother to watch long enough to see the small boy being led away from the ring. Most are already busy looking to collect on their bets.

Chris Walker and Morgan Hartley are freelance journalists traveling through Asia by bike. You can follow their journey at www.postulateone.com.