Accessibility links
Are Buddhist Monks Involved In Myanmar's Violence? : Parallels When tightly controlled societies open up, long-suppressed sectarian tensions can flare. That's been happening in Myanmar. And the twist is that Buddhist monks, widely viewed as pacifists, are part of this rising Buddhist nationalism. 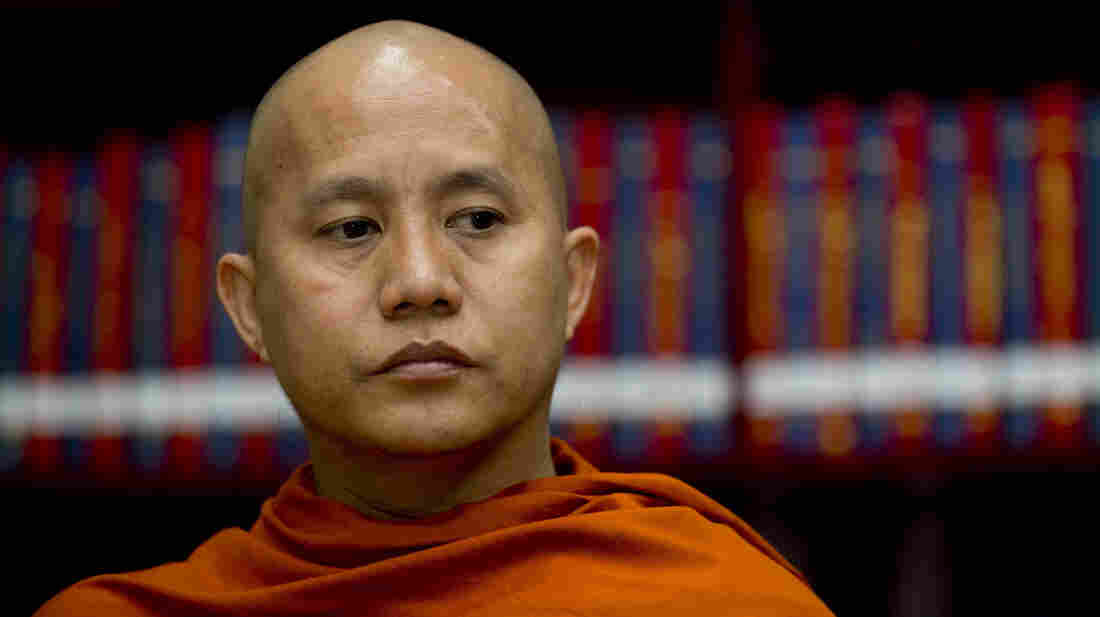 Some Muslims say Buddhist monks have been inciting followers during recent violence in Myanmar. Monk U Wirathu acknowledges that he is a Buddhist nationalist but says he has tried to prevent fighting. He's shown here at the Masoeyein monastery in Mandalay, Myanmar, on March 27. Gemunu Amarasinghe/AP hide caption 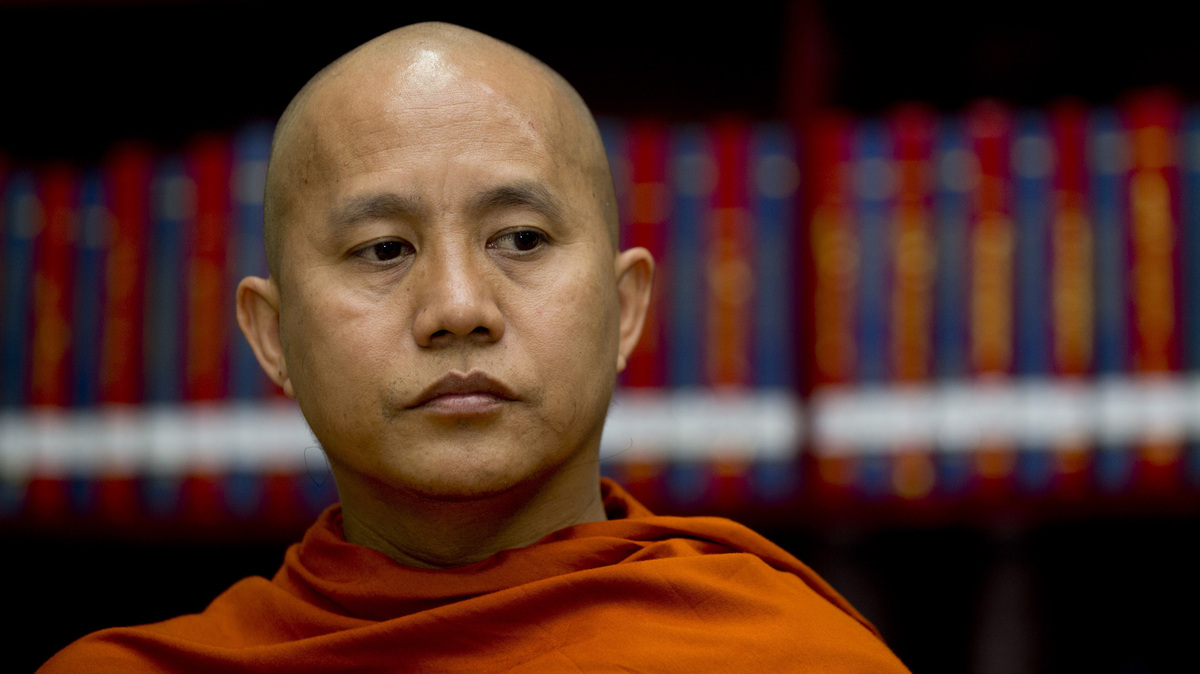 Some Muslims say Buddhist monks have been inciting followers during recent violence in Myanmar. Monk U Wirathu acknowledges that he is a Buddhist nationalist but says he has tried to prevent fighting. He's shown here at the Masoeyein monastery in Mandalay, Myanmar, on March 27.

In the Western stereotype, Buddhists are meditating pacifists who strive to keep their distance from worldly passions. But last month, more than 40 people were killed in fighting between Buddhists and Muslims in the central Burmese town of Meiktila. Witnesses say some Buddhist monks joined in the violence, while others tried to stop it.

One prominent monk in particular has been blamed for being behind it.

U Wirathu, 45, is head of the Masoeyein monastery in Myanmar's second-largest city, Mandalay, just up the highway from Meiktila. Wirathu is considered a talented scholar of Buddhist scriptures in the ancient Pali language, which gives him authority among Buddhists.

On a recent day, he sat in the middle of a large hall, full of Buddhist imagery and pictures of other monks. Wirathu is a slight figure, clad in saffron-colored robes. He says he was in Meiktila during the violence, and was trying to stop it.

"We spoke to the crowds to try to control the situation," he says in a steady voice. "We assured them of their safety. We told them we intended to protect their lives and homes and asked them to join us."

Wirathu acknowledges he's a Buddhist nationalist. But he says he's just defending his nation and his religion against attacks by outsiders.

"The Burmese race has been insulted," he argues. "The Buddhist religion has been attacked, and our country has been trespassed. These are the origins of our nationalism."

Why (Almost) No One In Myanmar Wanted My Money

A decade ago, authorities charged Wirathu with inciting anti-Muslim riots outside Mandalay, and jailed him for eight years. He's aware it could happen this time too.

"One of my followers was arrested. Another one is missing, and his house was searched. Some books of mine were confiscated. They are watching me too, and will probably arrest me soon.

He laughs nervously, and points out two men who have quietly come in and sat down during our interview. One, he says, is police, the other, military intelligence.

Wirathu says the recent violence in Meiktila is an extension of fighting between Muslims and Buddhists last year in western Rakhine state that killed more than 110 people.

The group Human Rights Watch has called this ethnic cleansing against Muslims. But Wirathu says it was an organized attack on Buddhism.

Wirathu says he's not anti-Muslim. But he is against Buddhists marrying Muslims, and he advocates a boycott of Muslim-owned businesses.

"Muslims who live in Burma have raped Burmese girls, even mute girls, mad girls, Buddhist nuns too," he claims. "They married Burmese Buddhist girls and forced them to convert to Islam by stepping on the pictures of the Buddha and pagodas. All this inflicted a lot of mental pain."

Under Britain's colonial rule of Burma until 1947, many Muslim Indians who spoke English and understood colonial ways immigrated to Burma. They staffed the local bureaucracy and dominated professions such as medicine and money lending. During the Great Depression in the 1930s, resentment against this dominance erupted into anti-Muslim riots. Some of that suspicion remains to this day.

Perhaps the most contradictory thing about U Wirathu is that he and his followers describe him as pro-democracy. Pictures of democracy icon Aung San Suu Kyi meeting with President Obama are prominently displayed in his monastery. Many members of democratic political parties, such as the National League for Democracy, revere Wirathu and claim he is not anti-Muslim.

Matt Walton, a Burma expert at George Washington University, says that a century ago, Buddhist nationalists like Wirathu led the effort to make Burma into a modern democracy, free of British colonial rule.

"You had this really complex combination of this sort of democratic intention," he says, "or, at that time, a desire for independence that was coupled often with this virulent exclusionary nationalism, this idea that, in order to get independence, we have to get rid of all of these groups that weren't really part of the nation."

Walton says that in Myanmar, the concept of democracy often emphasizes the rule of the majority, which in this case means ethnic Burman and Buddhist, over the rights of the minority.

Buddhist nationalism has also cropped up in Sri Lanka, where majority Buddhists are in conflict with Hindu and Christian Tamils, and in southern Thailand, where there are tensions with Malay Muslims.

Those Buddhists share the perception that their religion is under attack, and they fret that their countries could go the way of Afghanistan and Indonesia, where Islam supplanted Buddhism as the dominant religion.