Accessibility links
Riots In Sweden. That's Right. Sweden : Parallels Sweden has a global reputation as a smoothly run, harmonious nation. But following the death of an immigrant, three nights of rioting have prompted some soul-searching. 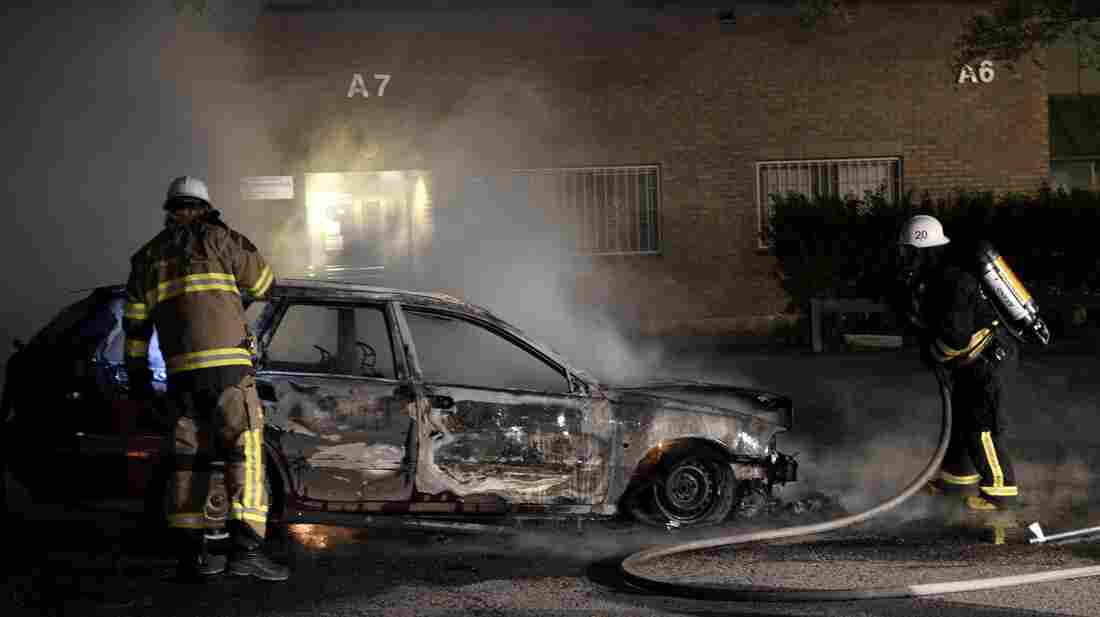 Swedish firemen extinguish a burning car Tuesday after youths rioted for a third night in a row in the suburbs of Stockholm. The unrest began after police said they shot dead a 69-year-old man wielding a machete in an immigrant neighborhood. Jonathan Nackstrand/AFP/Getty Images hide caption

Sweden is one of the wealthiest, most stable and smoothly running countries in the world.

Which would explain why the country's 9.5 million residents may be shocked by the events of the past few days.

For the past three nights, hundreds of youths have been rampaging through parts of the capital, Stockholm, torching cars, setting fires, and throwing rocks at police and fire trucks.

The trouble began over the weekend, after the police shot dead a 69-year-old man in the city's Husby neighborhood, where many residents originate from the Middle East and Africa. The exact circumstances are a bit cloudy: The man allegedly threatened officers with a machete.

Sweden's prime minister, Fredrik Reinfeldt, appealed for calm on Tuesday, condemning the riots as hooliganism. His words failed to prevent another night of violence, in which two schools, a police station and an arts and crafts center were attacked, and 30 cars were burned.

Soul-searching is underway in Sweden — for years admired by the world as a champion of tolerance — over the possible causes of the unrest.

The police blame "youth gangs and criminals." Others cite a range of factors, particularly high youth unemployment levels among people of immigrant origin, a problem that blights large parts of Europe.

"There's an underlying problem of a lack of jobs, and a perceived lack of opportunity among people living in these areas," says David Landes, editor of The Local newspaper in Sweden.

In the troubled neighborhoods, allegations are said to be flying around about police brutality, racism and harassment. Sweden is once again facing a debate over whether immigrants and their families — once welcomed with open arms — are being marginalized, and whether multiculturalism is working.

Immigration is a controversial issue in Scandinavia these days: Resentment over asylum seekers, competition for jobs, and Islamist militancy have helped fuel a surge in support for anti-immigration parties in the region. These include the far-right Sweden Democrats, now running third in opinion polls.

Asked about Stockholm's unrest, Rami Al-khamisi, a co-founder of Megafonen, a group that works for social change, described Sweden as an "increasingly divided" society. He told Reuters that these "gaps, both socially and economically, are becoming larger."

Justice Minister Beatrice Ask has reportedly acknowledged "social exclusion" as "a very serious cause of many problems." She's promising that Stockholm's police will forge closer ties to troubled local communities.