Accessibility links
In Damascus, A View Of Syria's War Turned Inside Out : Parallels There's fear and frustration in the capital, but even people who acknowledge President Bashar Assad's flaws often grimly hope for the rebels to go away: They believe the government's description of the rebels as terrorists and foreigners out to destroy the country. 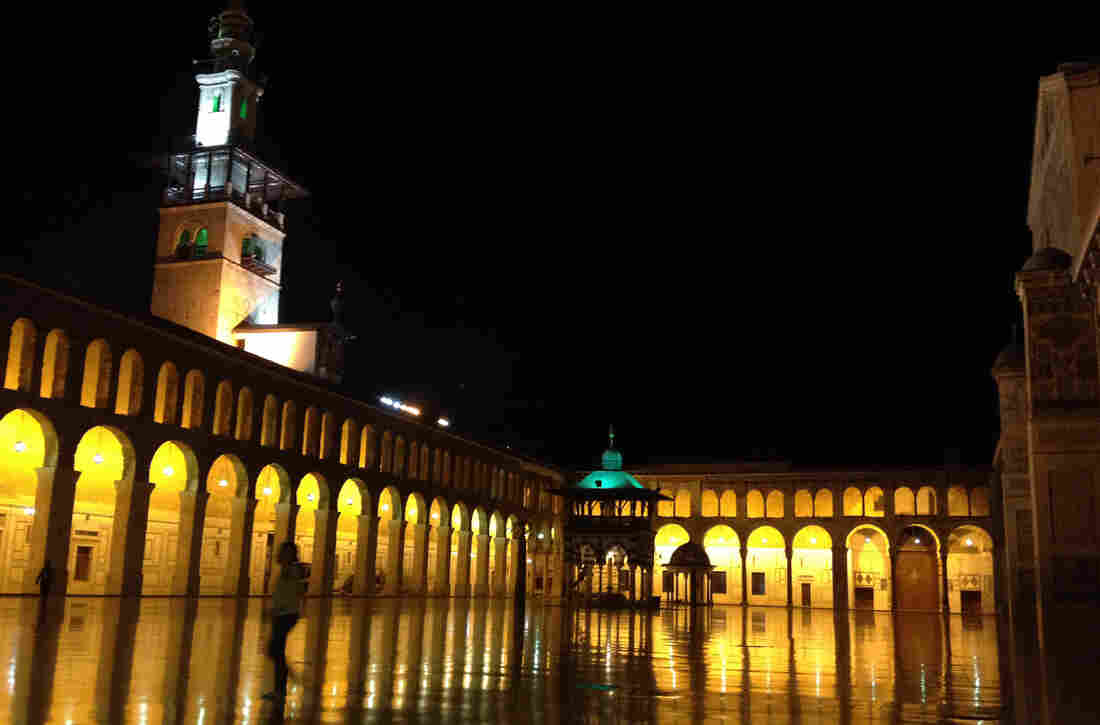 The Ummayyid Mosque in Damascus has been a mosque for around 1,400 years. It sits in the center of a city where many people are struggling to live normal lives amid war. Steve Inskeep/NPR hide caption 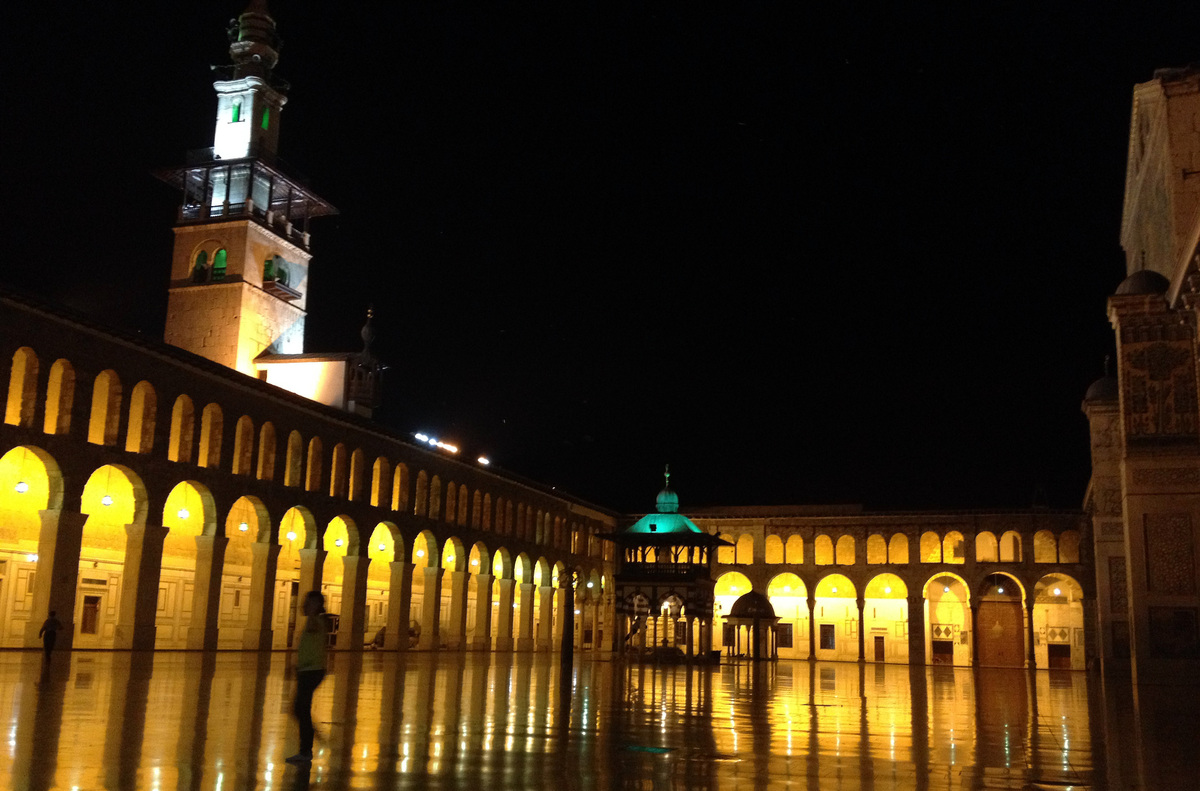 The Ummayyid Mosque in Damascus has been a mosque for around 1,400 years. It sits in the center of a city where many people are struggling to live normal lives amid war.

Many years ago, the president of Syria, Hafez al-Assad, approved the construction of a new presidential residence on a mountainside above Damascus.

Assad never occupied the building, saying his successor should take it. When his son Bashar Assad became that successor, he didn't move into the house, either. He preferred a residence down the slope.

But there is still a presidential complex at a crest of the mountain, with a balcony overlooking the city sprawling below. Should Syria's president choose to lounge on that balcony on any given afternoon this week, the younger Assad would see black smoke from artillery strikes as his army fights for control of the suburbs against the rebels who want to oust him.

Traveling to Damascus produces a view of Syria's war turned inside out. The international community may view Assad as a pariah, but in the capital he is still president, his face on billboards and posters. What some outsiders may see as bad news is received here as good news, while the good news is bad. Even people who acknowledge Assad's flaws often grimly hope for the rebels to go away: They believe the government's description of the rebels as terrorists and foreigners out to destroy the country.

We arrived in Syria during the same weekend that the government agreed "in principle" to peace talks with the rebels, but there is no sign of peace in the capital. The road to Damascus, lined with purple flowers, is also lined with soldiers: We stopped at one military checkpoint after another on the short drive in from Lebanon.

One of the guard booths featured a poster of Assad and a label describing him as the maker of surprises and overcomer of crises.

Right now the crisis is the survival of his regime. Thousands of armed men patrol a secure zone in the heart of the city. Some are regular army soldiers in uniform; others are neighborhood teenagers with T-shirts and Kalashnikovs. Assad's government has armed many military veterans and others, supplementing the manpower of armed forces he did not entirely trust.

Many of these recruits are drawn from religious minorities — Shia Muslims, Christians, Druze and especially Assad's own Alawite sect. Fighters from the Shia group Hezbollah have also come from Lebanon. They oppose a rebellion that includes many of the majority Sunni Muslims.

An uprising that began as a drive to remove Assad has led to fears of sectarian war.

At the center of this ancient city is a centuries-old mosque; it is almost as old as Islam itself, and for centuries before that it was a Christian church and a Roman-era pagan temple. But Damascus is better known for trade than for religion. Around the mosque, we walked the stone-paved streets of the ancient bazaar.

Business is bad, as we learned in the shop of a fabric seller. Syria's currency has plunged in value. That drives up prices of the imported goods he sells. Almost every day, the price changes, he says.

A customer may order cloth at a certain price. "Half an hour later," the man says, "I call and find out [the] latest shift in the exchange rate," and he discovers it will cost him more to import the cloth than he would earn from the sale.

Like many people in Damascus, this man declined to give his name and said nothing against the government of Bashar Assad. Business groups of all sects have been among Assad's major supporters. Yet the fabric seller is clearly frustrated by the war.

"I would like to shout to everybody," he says, "don't go the way of sectarian divisions."

Fighting has already driven him out of his suburban home, in a no man's land between the army and rebels.

He's one of many people struggling to live normally in a city where life is not normal at all.

Our first night in Damascus, we went out for dinner on a rooftop restaurant. It was in the old walled city. The waiters served a spectacular stream of dishes including kibbeh and kabob. Yet we were down the street from a Christian church whose bishops have been kidnapped. And the restaurant offered us an excellent view of what seemed to be tracer shells streaking across the sky.

Our dinner companions told us rebels have been fighting the army for months in the eastern suburbs. We could hear the explosions. Once daylight came, the shelling continued, so we drove toward the blasts.

We were soon driving through the area of fighting: mile after mile of rubble; buildings that had been half-destroyed, entirely destroyed; houses with holes punched into them.

We passed what used to be a giant strip of suburban auto dealerships, of the kind you might see in America. Now the cars are gone, except for the ones left burned out on the road.

I made some audio notes, talking into the tape recorder: "Tank treads left on the street ... piles of fruit left on the road as if a fruit truck spilled its load. The Volvo dealership is shut down ... " 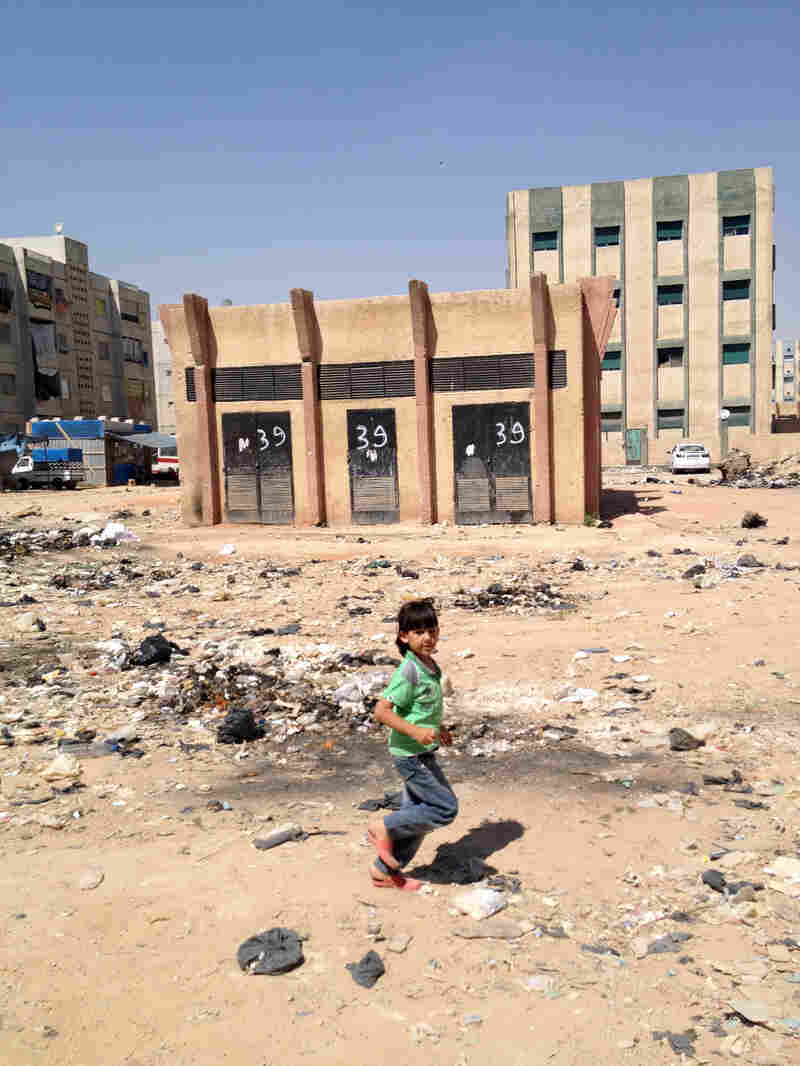 A child plays in a dusty courtyard of half-finished apartment buildings, now housing refugees, in a suburb of Damascus. The complex is deemed safe because artillery has landed across the street but not yet here. Steve Inskeep/NPR hide caption 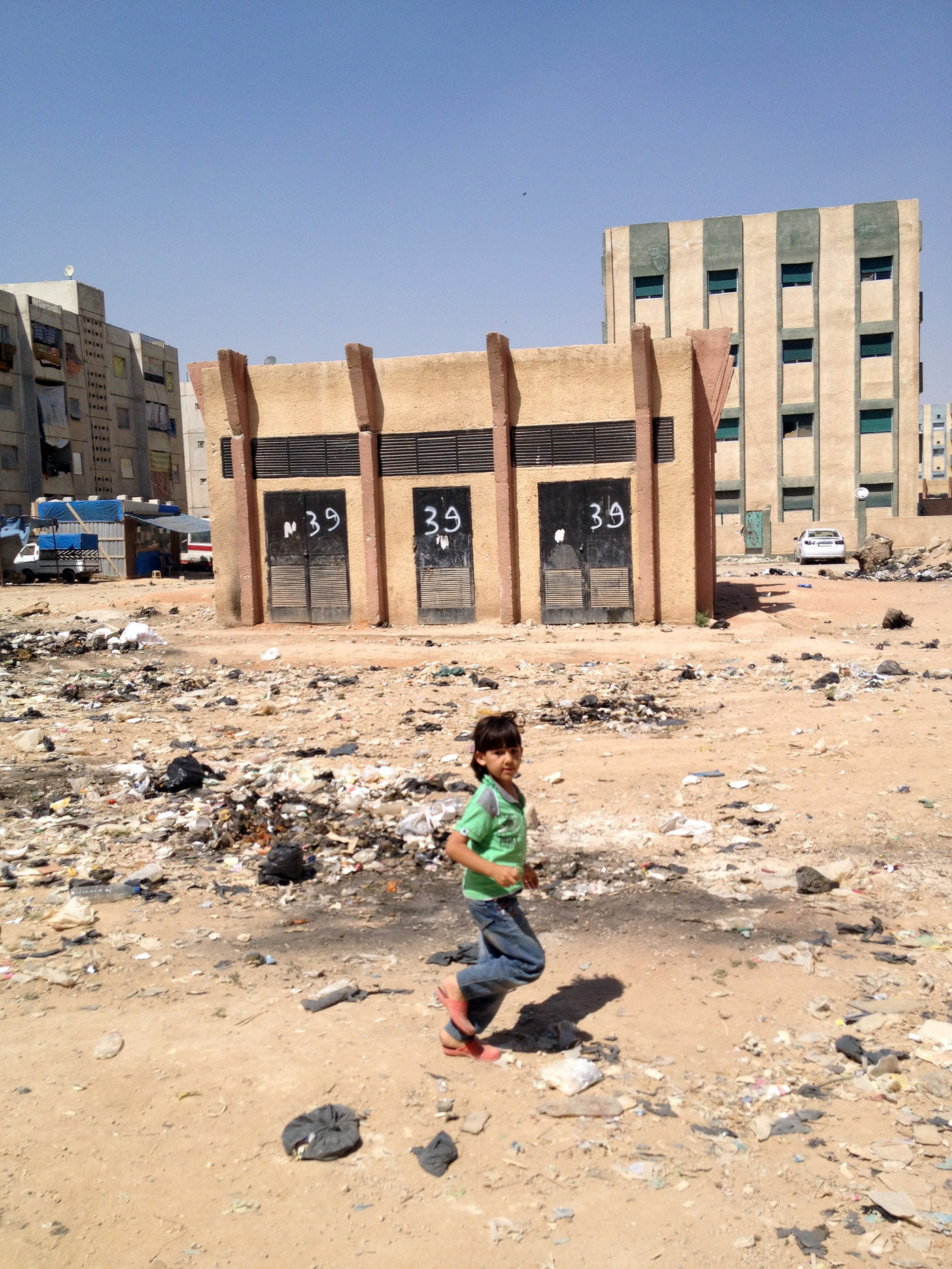 A child plays in a dusty courtyard of half-finished apartment buildings, now housing refugees, in a suburb of Damascus. The complex is deemed safe because artillery has landed across the street but not yet here.

Black smoke rose from the Honda dealership, apparently blasted just before we arrived.

Syria's government media say the army is clearing out foreign terrorists in this suburb called Douma.

Syrian rebels have been sending out videos of men, women and children they say are civilians killed by government shelling.

In another Damascus suburb this week, the rebels contend they were attacked with chemical weapons.

A little beyond the battle zone, we encountered a row of apartment buildings still occupied. Some of the buildings were only partially completed before the war, and their concrete shells have become shelters for refugees from the zone we just passed.

We walked up the rough steps of one building with a man we'll call Walid. He lives here now with his sister, her daughter and her 14-month-old grandson.

When they fled home in Douma, the family salvaged an ornate wooden wall clock but no furniture. We sat beneath that clock, talking while sitting on mats on the floor.

The family said they felt safe enough — stray artillery shells have landed in the field across the street, but not on this side.

Walid's sister said the family stayed in town through months of shelling but finally fled on a day when the explosions became "unbearable." They loaded the family into somebody else's car and drove until they found this empty building.

Many refugees live here with their families. We asked if the many children in the complex are accustomed to the gunfire. The sister answered: "I am old enough and I still get scared, so what do you think about the little ones?"

The family serves Turkish coffee in ornate china cups but has no glass in the windows. Walid, who used to work in construction, has helped to fix up the place a bit. Improvised electric wiring stretches from room to room.

Maybe that's the strangest thing of all — that his life is normal for Damascus.

Other buildings near Walid's are filled with manufacturing employees, who see the smoke of burning buildings out their windows but still work their shifts at steel plants up the road.

Two of those plants melt down scrap metal, and we saw workers use a metal claw to sort through a mountain of scrap.

The claw was picking up the remnants of many past lives — car parts, strips of chrome, bits of buildings, rebar, sheet metal, giant steel wheels.

Here we can see the only thing that's certain about Syria's future: The war's destruction will in time create more wreckage for the pile.