Accessibility links
Syria's Civil War: The View From A Damascus Shrine : Parallels Syria's war has polarized the country. But as in many conflicts, a large portion of the population just wants to keep their heads down and stay out of harm's way. A visit to the Sayida Zeinab shrine offers a look into the complicated nature of the war. 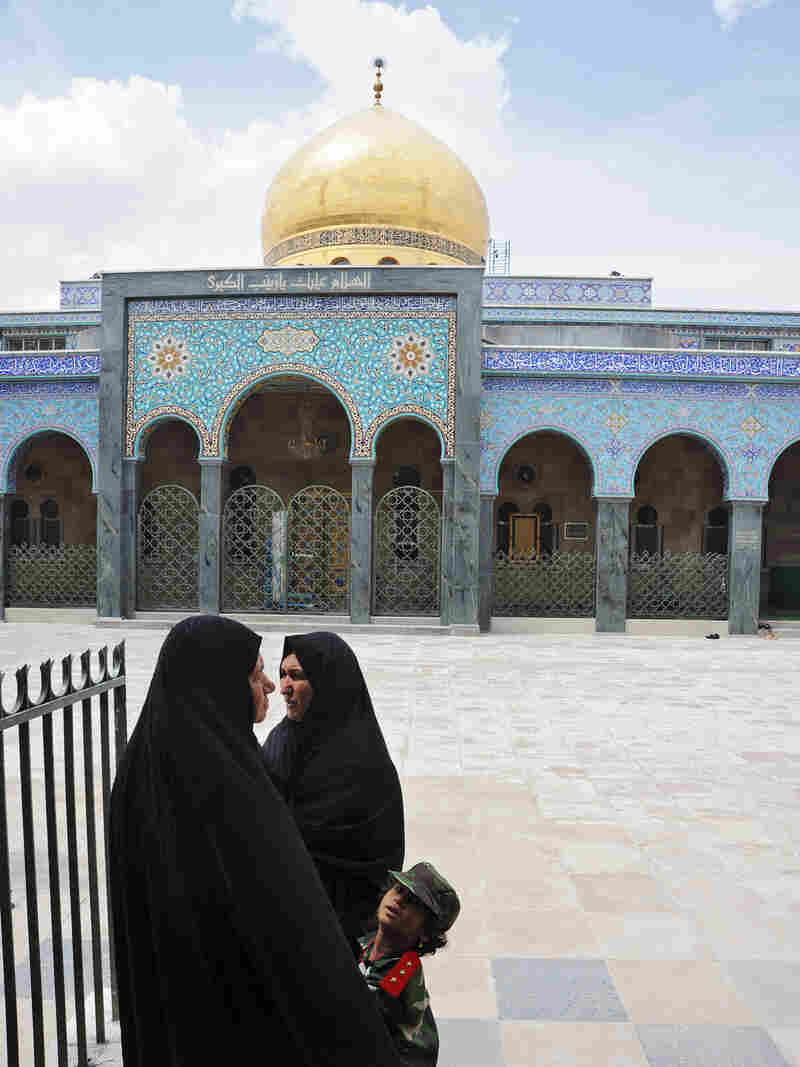 Syrian pilgrims stand in the courtyard of the Sayida Zeinab shrine with a young girl dressed as a Syrian military officer on May 29, 2012, in Damascus. Kaveh Kazemi/Getty Images hide caption 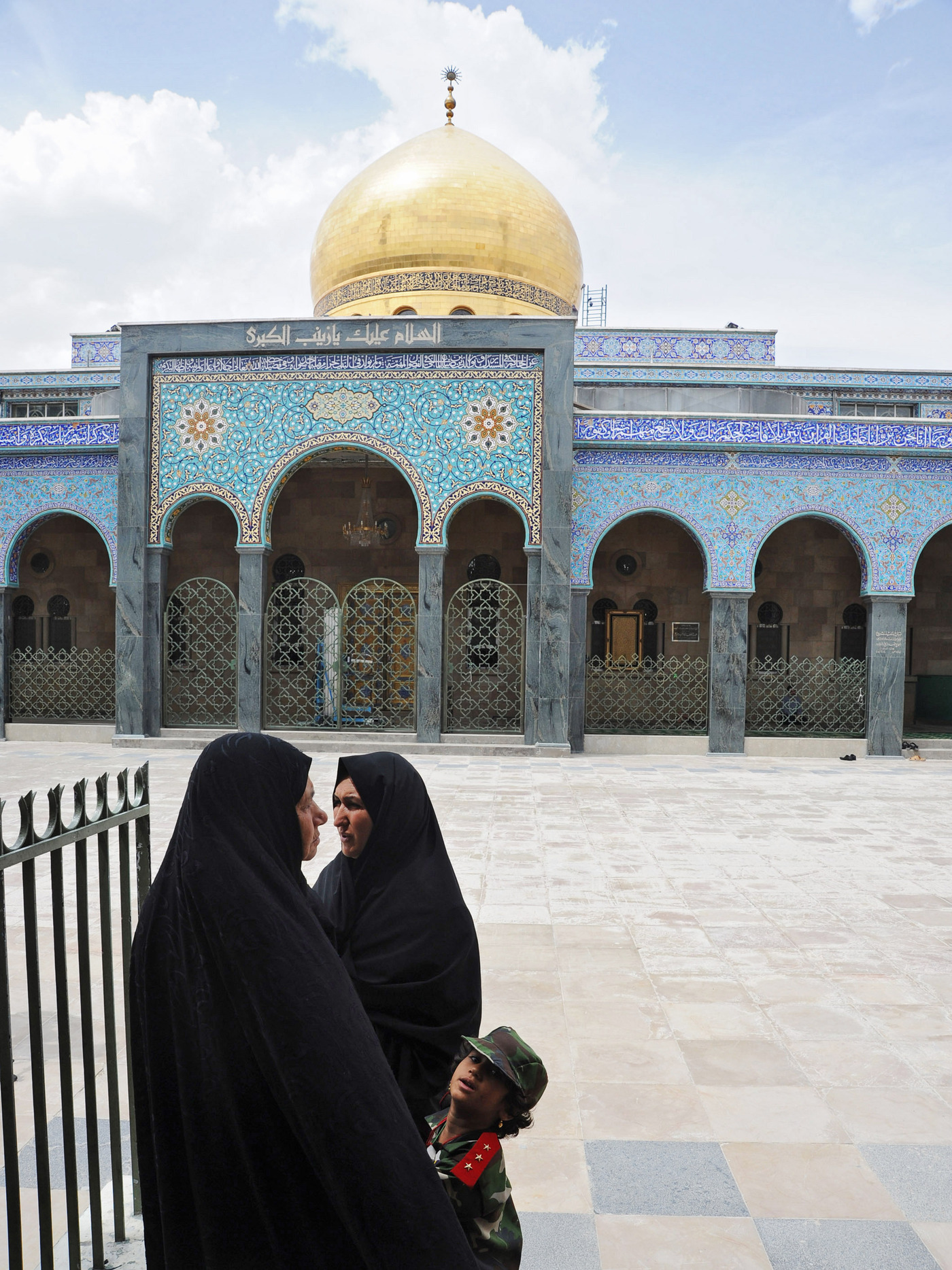 Syrian pilgrims stand in the courtyard of the Sayida Zeinab shrine with a young girl dressed as a Syrian military officer on May 29, 2012, in Damascus.

Traveling to Damascus gives you a view of Syria's war turned inside out.

The international community talks of arming Syria's rebels against President Bashar Assad, but in the capital many people still hope the rebels will lose.

That's the thinking we found around a Muslim shrine in Damascus, a tribute to the granddaughter of the Prophet Muhammad. She lived centuries ago, but a Damascus doctor we met spoke of her in the present tense.

We wanted to visit, so the doctor offered to guide us there. We arranged to meet beside the highway leading toward the shrine. He leaned into our car window to talk, though like many people here he asked us not to use his name.

Sayida Zeinab is holy to all Muslims, though the Shiite sect maintains the shrine, which is in a Shiite neighborhood. The doctor said it's surrounded by many guards, out of fear that Sunni extremist rebels will destroy it.

"They do not believe in shrines. The terrorists have Wahhabian ideas," he said of the Wahhabi, followers of an especially austere brand of Islam.

Assad's government has relentlessly said the rebels are foreign terrorists. There is no evidence that all of the Sunni rebel groups oppose Shiites, though it is clear that some are extremist Sunnis. Fear of them has bound Shiites and other minority groups to Assad's regime.

The shrine is in an area of heavy fighting, but the doctor said he has never missed a day of work at a hospital nearby.

"I have been working in Sayida Zeinab for 25 years as a doctor," he said.

He offered to lead us there. Our cars raced down a highway, the Damascus airport road, past bombed-out buildings on either side. And then we arrived at a series of military checkpoints.

We walked a busy street until we saw the shrine's golden dome. We arrived in a courtyard with walls covered in elaborate blue tiles. Words echoing off those walls showed which side of the battle lines the shrine is on.

The announcer was marking the deaths of three men killed in the war — martyrs, the speaker said, fighting for Assad's government.

The guards of the shrine include men from Lebanon. They are allies of Assad, longtime veterans of the Lebanese Shiite group Hezbollah. They believe Syria has become the scene of a proxy war between Shiite Iran and Sunni Arabs, including the rulers of Saudi Arabia. 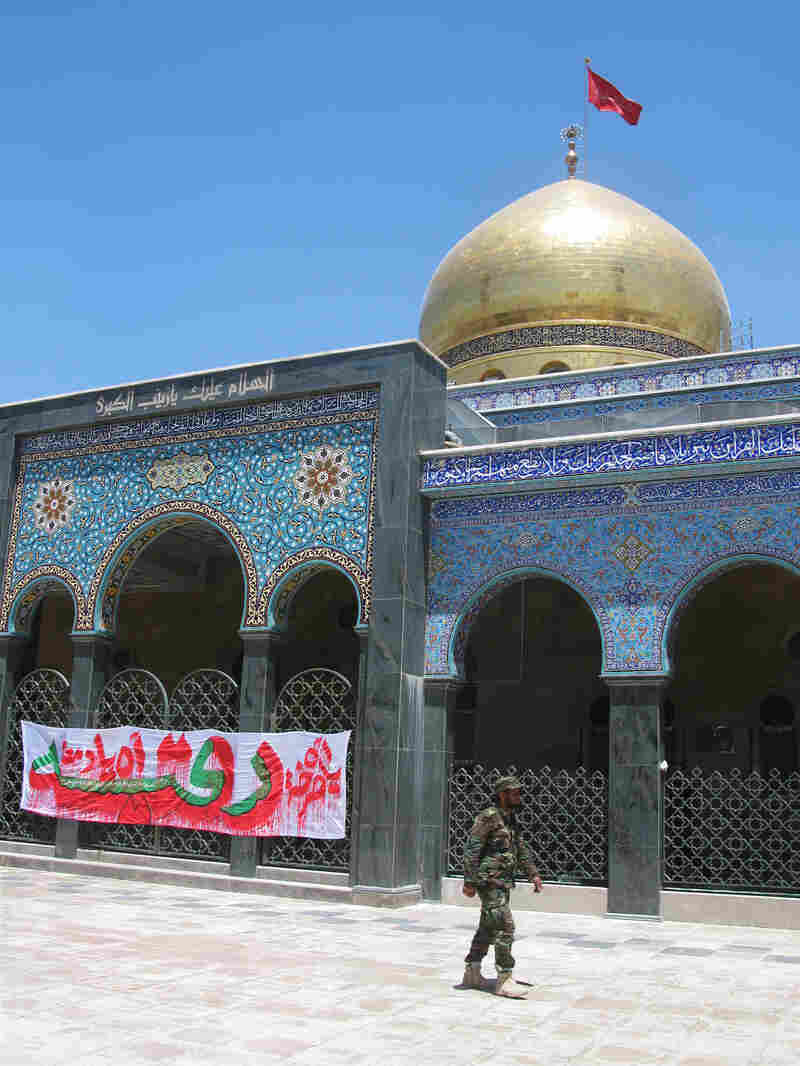 A Syrian soldier walks past the shrine, which is guarded by forces loyal to President Bashar Assad. Nishant Dahiya/NPR hide caption 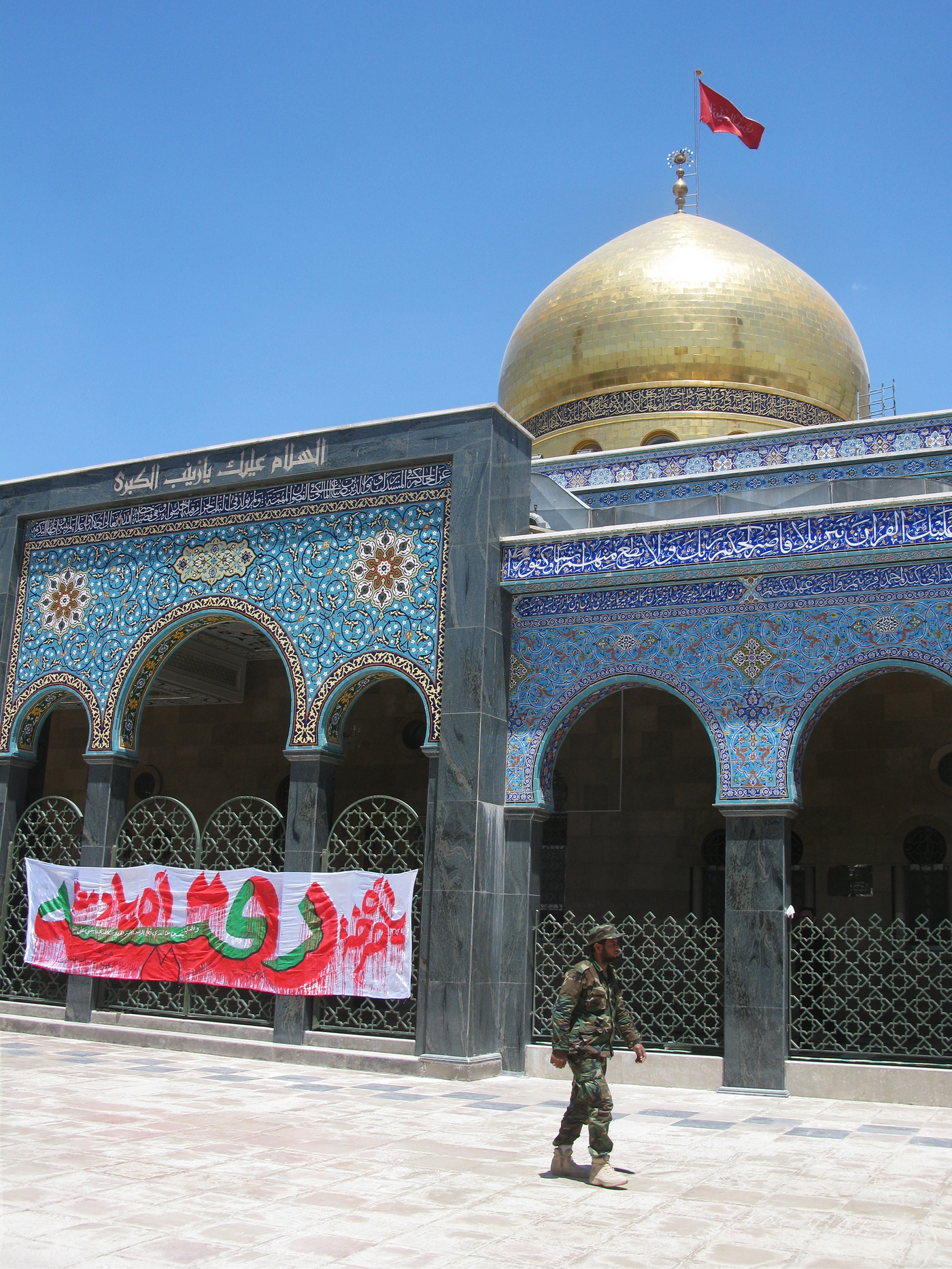 A Syrian soldier walks past the shrine, which is guarded by forces loyal to President Bashar Assad.

The guardians also include local men, like a former sheep dealer who joined a volunteer defense force.

Let's not hide behind one finger, he said, adding: We all know there's a conspiracy against us. He said: There is nothing wrong with us pulling together with people who share our beliefs.

Beneath the shrine's golden dome we entered a room of brilliant light. Every wall and the ceiling was covered with mirrored tiles. Pilgrims put their hands on Sayida Zeinab's tomb.

One young mother, with a baby in her arms, paused to talk through a translator.

"Why do you support the government, the regime?" I asked.

Nearby, a caretaker of the shrine said he also backs Assad.

He said Syrians are too "ignorant" to "import" "foreign" ideas like Western democracy.

When we left the shrine, we walked down the battle-scarred street behind it and arrived in the local hospital. There we met again with the doctor who was our guide.

The doctor said he does not love Assad too much. He even dared to say that others could do better. Yet he strongly disapproves of the rebels.

In Syria's elections, Assad has always been the only candidate: It's a yes-no referendum on his rule. The challenge for Syria's rebels is to finally present some plausible alternative — a new system of government in which terrified Syrians might believe.