Accessibility links
Greece Has A PR Problem. Can It Be Fixed? : Parallels Greeks are growing weary of the nonstop international criticism the country has faced during its economic crisis. Some grassroots groups are trying to rebuild the country's tattered image. 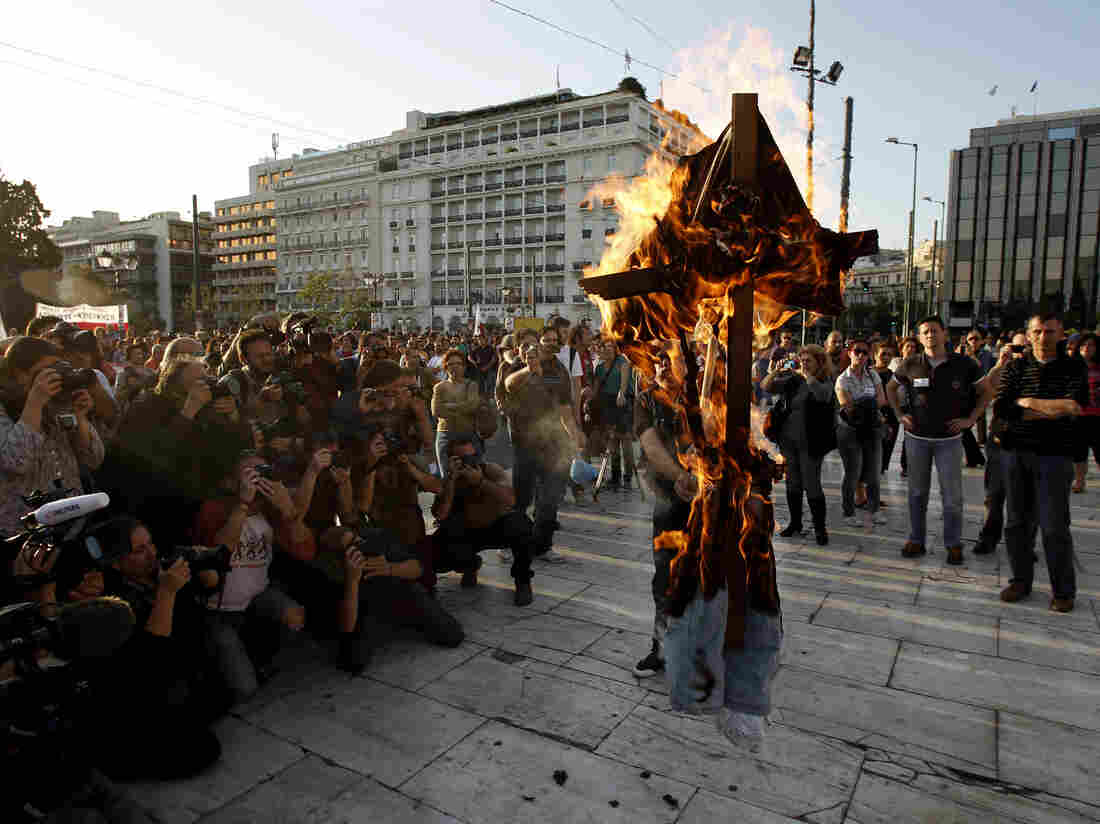 A protester burns an effigy depicting a Greek worker, in front of parliament in Athens on April 28. A few hundred public servants protested peacefully as lawmakers voted on a new austerity bill. Kostas Tsironis/AP hide caption 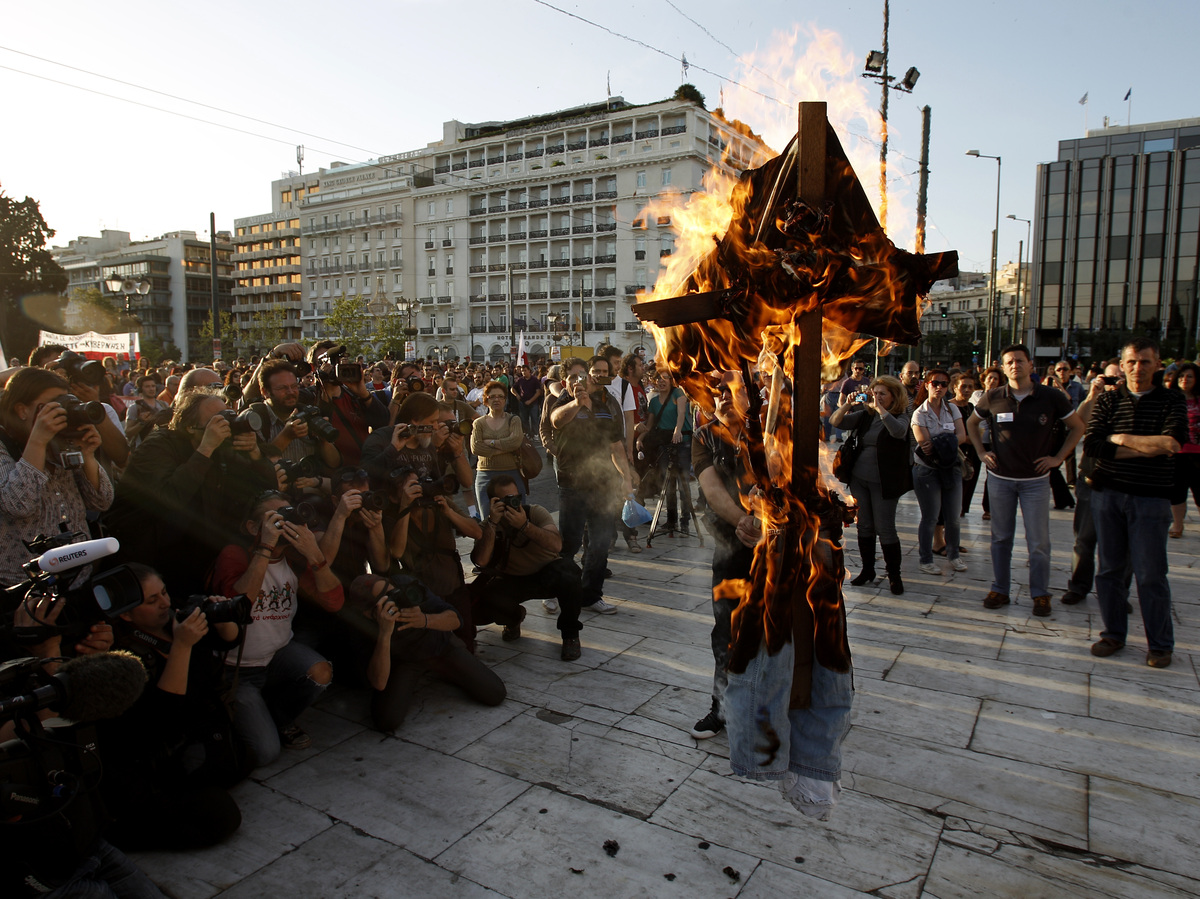 A protester burns an effigy depicting a Greek worker, in front of parliament in Athens on April 28. A few hundred public servants protested peacefully as lawmakers voted on a new austerity bill.

Greece used to be a place with a positive global image: gorgeous islands, friendly people, great food and stunning history.

Then came the financial meltdown. Three years ago, when Greece became the first eurozone country to receive a multibillion-dollar bailout, many international media organizations portrayed Greeks as corrupt tax-evaders who liked to riot instead of work.

Over the past year, Greeks have been portrayed as the impoverished victims of incompetent politicians, corrupt oligarchs and cruel Europeans bent on poisoning them with austerity.

"Greeks were either rioters throwing Molotov cocktails or homeless people begging for food," Ismini Spachou, an Athenian who works in development aid, tells NPR. "The Greek crisis is now a product, and what sells is drama."

But drama has also drained the country of context, she says, turning it into a caricature of stereotypes. So last year, after stewing at the incessant criticism of Greece, Spachou joined Omikron Project, a small grassroots group that is offering an alternative view of the country with animated videos, advertisements and social media.

The videos feature a character named Alex who's assumed to be "a lazy, cheating, ungrateful, helpless, corrupt, violent, rude, racist, tax-evading, trouble-making, thieving vandal that lives with his mother."

"He's supposed to deserve everything that's coming to him," says Mehran Khalili, a British-Iranian political communications consultant who's married to a Greek, lives in Athens and narrates the Alex videos. "But not if you consider the facts."

For example, Khalili says, Greeks actually work longer hours than anyone else in Europe: about 42.2 hours per work compared to, say, about 35.6 in Germany, according to Eurostat. Greeks also retire later than most Europeans and also have lower salaries and fewer vacation days.

And while violent protests shook central Athens in 2012, he says, the rioters were a tiny subsection of a much larger group of demonstrators who marched peacefully.

"Many people I know say, 'Let's just fix what's wrong and then work on the image later,' " he says. "But that's enormously damaging. Think of the economic cost, especially in tourism, as the summer is coming up. Do you want to visit a country when you're being told endlessly how messed up it is?"

It's not the first time concerned citizens have tried to rescue Greece's image. Organizations like GoodNewsGR spread upbeat news about Greece through a website and Twitter feed.

And in 2011, when the corrupt, lazy, violent Greek meme was at full throttle, a Greek-South African marketing strategist named Peter Economides sought to improve the nation's damaged self-esteem through a campaign called Yinetai, which means "It is possible."

Violence At Both Ends Of Political Spectrum Threatens Greece

For Greeks, A Sad Shift In Self Image

For Greeks, A Sad Shift In Self Image

In a nation where bureaucracy and fossilized attitudes have often killed entrepreneurship, Economides wanted to convince Greeks that they could raise the country's collective self-esteem through innovation.

Omikron Project says its videos and advertisements are still largely viewed domestically "and our goal is really an international audience," Khalili says. He is heartened, though, by the positive ways in which Greeks are responding to the crisis.

Omikron Project recently released a map showing at least 238 grassroots groups that have sprung up in the last three years in areas such as health care, education and food distribution.

But Khalili acknowledges that it could take awhile before Greece is again seen as more than just ground zero for the eurozone crisis.

Post-crisis Greece is often condensed into a paragraph of alarming statistics and worrying trends: A record-high unemployment rate of 27.2 percent that rises to 62.2 percent for those under 25. An economy that has shrunk for 19 consecutive quarters.

More than 1 million Greeks are out of work, 800,000 of them for more than a year, which means they've lost their health care coverage.

Behind those numbers, there's the psychological toll. More Greeks are clinically depressed, more are committing suicide and more are leaving the country.

There's also a societal toll. Greeks no longer trust their institutions or their politicians, who are seen as puppets of oligarchs. The once-obscure neo-fascist Golden Dawn Party, whose supporters are blamed for an alarming rise in racist attacks on immigrants, now has seats in Parliament.

The Bank of Greece says the country is on the road to recovery, but a recent poll showed that most Greeks believe the economy will never recover.

"It's hard not to feel like you're suffocating," says Maria Nakou, an oncology nurse who recently emigrated to Zurich for a new job. She had been working at a private clinic in Thessaloniki that hadn't paid her in months.

Nakou grew up in Germany, where her Greek parents had immigrated in the 1960s. She returned to Thessaloniki as an adult. She said she saw firsthand the problems with bureaucracy and corruption that largely contributed to Greece's debt crisis.

But she says she also saw beauty. "Not the beaches, music and archaeology — that's all well-known," she says. "The Greeks surprised me. They would ask me about Germany, about the history and people and geography. They were traditional but they were always curious. I'm still hoping that curiosity saves us."

It's a curiosity that can force surprise turns in a grim narrative, she says. That's the message behind this new tourism video from Crete that's gone viral. A sandy-haired European tourist in dorky walking shorts is caught stealing oranges from a farmer's grove. The big, bearded Cretan farmer looks him in the eye, frowning. See what happens next.