Accessibility links
Rio Goes High-Tech, With An Eye Toward Olympics, World Cup : Parallels New technology is changing the way cities are run, with cutting-edge urban innovations around the globe. Sprawling, chaotic Rio de Janeiro has built a state-of-the-art operations center as it gears up for two major events. 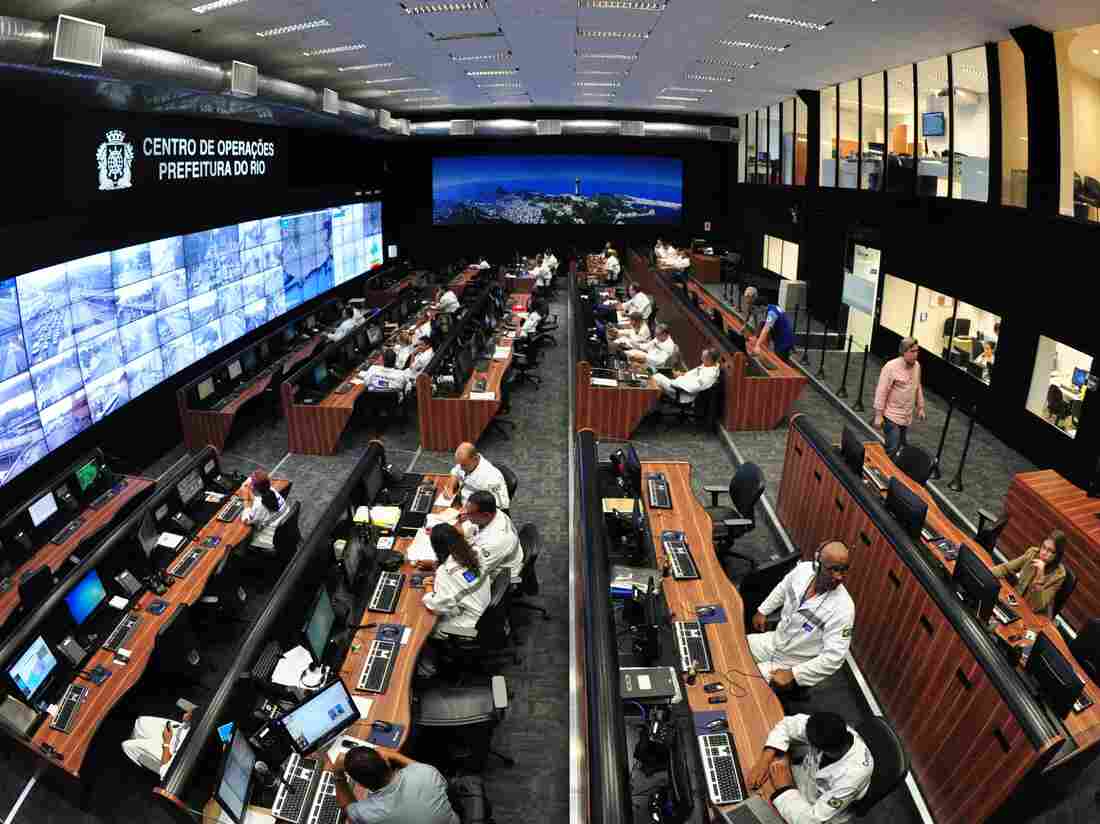 Rio's Operations Center brings together more than 30 agencies and allows them to coordinate on daily issues such as traffic, as well as on emergencies such as the frequent flash floods in hillside slums. Raphael Lima/Courtesy of the Operations Center, City of Rio De Janeiro hide caption 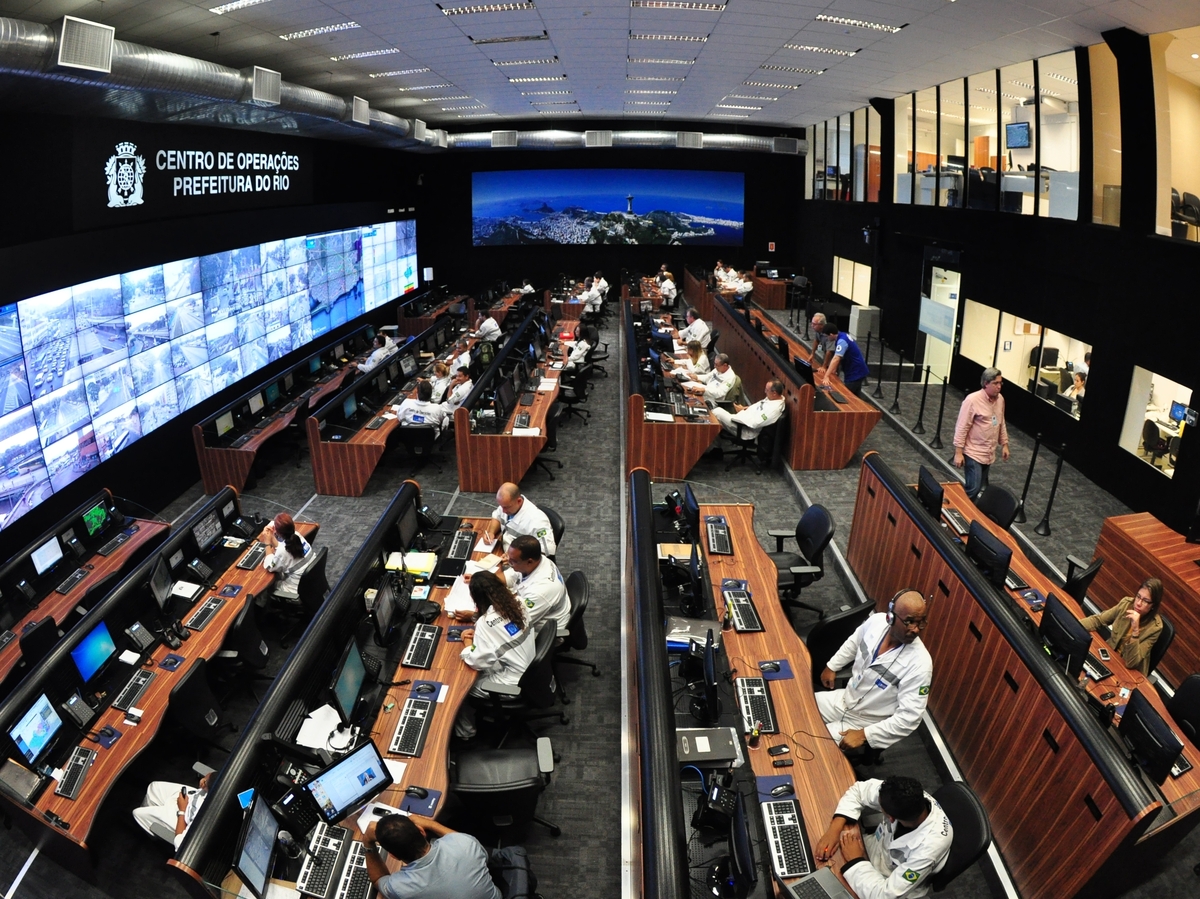 Rio's Operations Center brings together more than 30 agencies and allows them to coordinate on daily issues such as traffic, as well as on emergencies such as the frequent flash floods in hillside slums.

We are standing in front of a huge bank of screens, in the middle of which is a glowing map that changes focus depending on what the dozens of controllers are looking at.

The room looks like something straight out of a NASA shuttle launch. The men and women manning the floor are dressed in identical white jumpsuits. With a flick of a mouse, they scroll through dozens of streaming video images coming into the center.

This is Rio de Janeiro in real time.

"This whole building is based on technology and integration," said Pedro Junqueira, the chief executive officer of the Rio Operations Center. 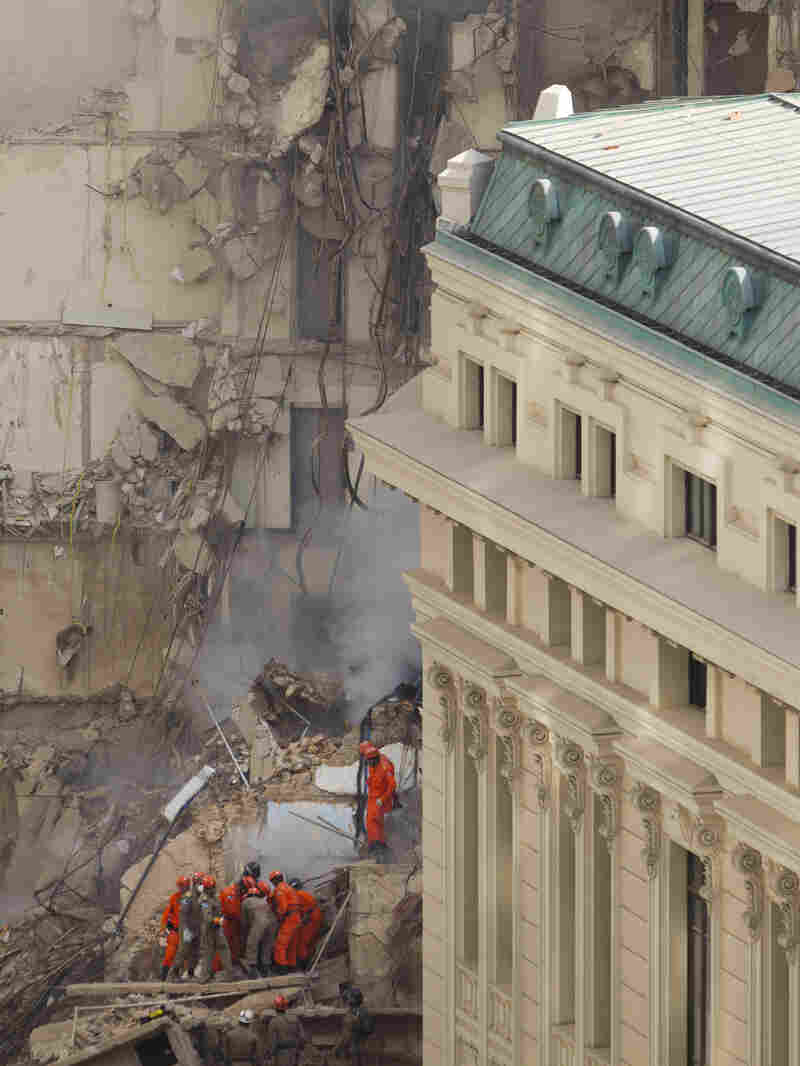 Rescue workers carry the body of a victim after a building collapsed in Rio on Jan. 26, 2012. The city's Operations Center was built to allow for a coordinated response during such emergencies. Felipe Dana/AP hide caption 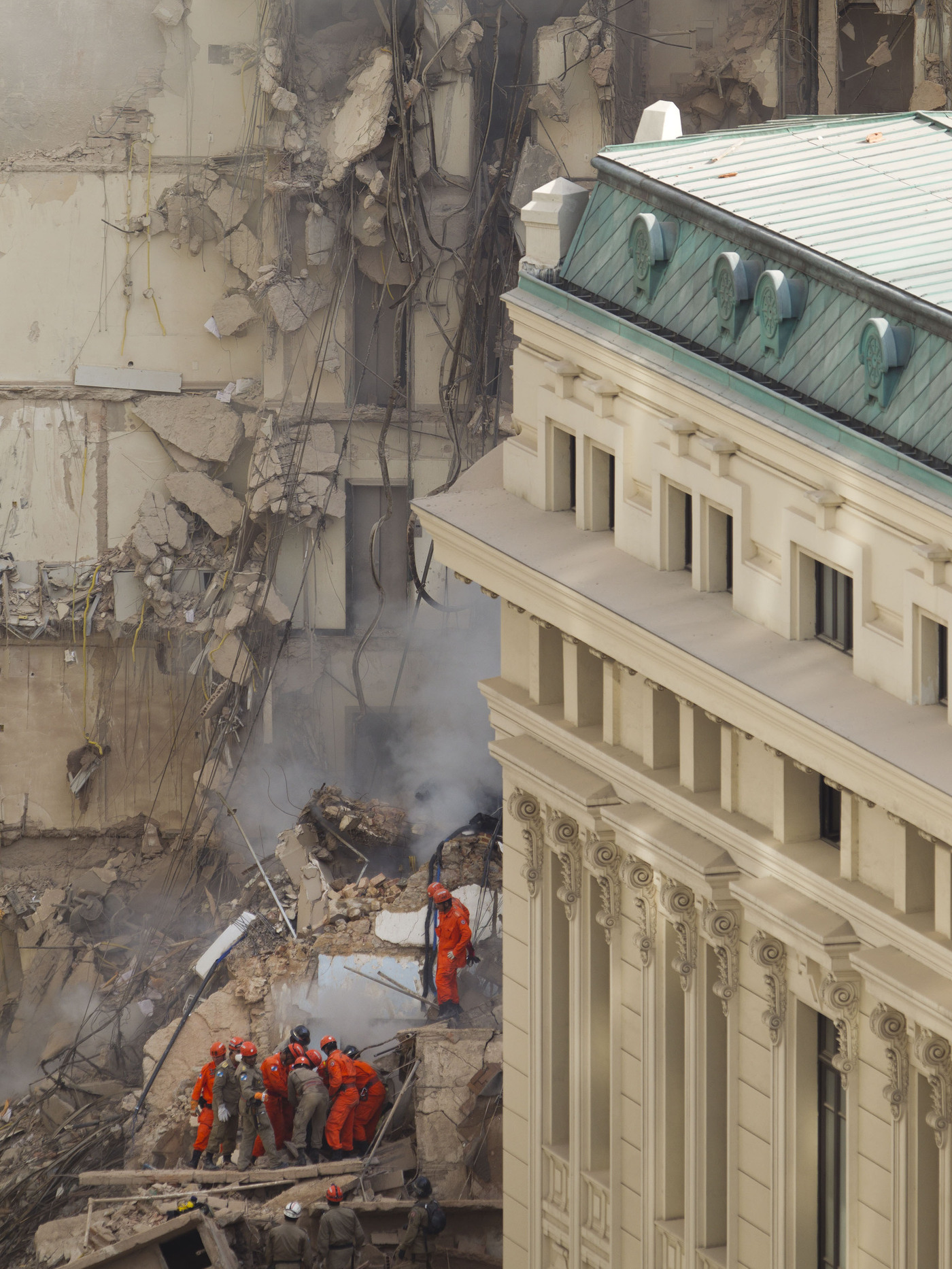 Rescue workers carry the body of a victim after a building collapsed in Rio on Jan. 26, 2012. The city's Operations Center was built to allow for a coordinated response during such emergencies.

The quiet hum of efficiency stands in contrast to the chaos on the streets of a city better known for rampant crime. Rio de Janeiro is a city of almost 6 million people of every social class. The poor live in favelas, or shantytowns, perched on the hills above the city. The rich and the tourists are down by the beach in glittering apartment blocks.

The Operations Center is the brainchild of the city mayor and was custom-built by IBM to act as a kind of master control for the city.

The workers are getting live streaming data from the ground and the sky: There are almost 600 cameras monitoring the vital throughways of the city, and satellite images mapping the weather.

Heavy rains are a major concern in Rio, where shantytowns built into the hills are extremely vulnerable to flash floods. In fact, a few years ago a deadly storm inspired the mayor to commission the Operations Center.

Now, alarms sound in the most vulnerable areas to warn people when they have to evacuate.

"Now we get to know what is happening faster and we get the teams to respond faster," said Junqueira.

But it's not just technology at work here. What is really revolutionary is having a single place where more than 30 agencies work. Previously, every agency had to work the phones when there was a crisis.

Now, all of these agencies are represented in the room, everyone from traffic engineers to geologists to the gas and electricity companies. Junqueira says it's a pretty seamless operation in a crisis.

"If I pick up the microphone and pronounce once what is happening, all of them, they know," he said.

Another key component is the media. There is a group assigned to covering social media sites to see what's going on in the city.

But more traditional networks have a dedicated space in a press box perched right over the main floor. Journalists say it has made the city operations more transparent and effective.

"Before, we used to have to get information from Twitter, for example, and now at the Operations Center you can see the situation firsthand, see the cause, how many people are affected, what hospital they are being taken to, all this in one place in a more accurate way," said Alexandre Alves, a journalist at Radio O Dia.

More From The Cities Project

What that means in practice is that the wider public is also being better informed. They will know, for example, what roads have been closed because of an accident and they can avoid that stretch, making it easier for rescue workers to do their jobs.

Junqueira says the operations center has become vital to the way the city is managed.

"Imagine the World Cup, the Olympic Games 2016. Right now, sometimes, I think it's impossible to run a city like Rio, as big as Rio, with so many things changing without a place like this," he said.

The first real test of the Operations Center came last year when a building collapsed in downtown Rio.

"I was inside the building when I saw some stonework falling," says Vicente Antonia Da Cruz. "I ran away. There was a lot of dust. A friend of mine died there. He was running out of the building like me but suddenly remember his wife was still inside, and he went back to save her, and the two died."

Along with Da Cruz's friends, another 15 people died in the accident. But city officials say it could have been much worse. When they found out what had happened, the center immediately coordinated the closure of streets, the evacuation of the wounded to area hospitals, the deployment of rescue workers.

Luis Antonio Cuelho, who operates a newsstand nearby, says the city's response was good.

But when I ask him about the Operations Center, he shrugs and says he has never heard of it

And that is one of the strange things about the use of technology in cities. Most people aren't really aware of it. Many of the people I spoke to here say they don't know what the Operations Center is or what it does. But they have felt the effects of it every day in small and big ways.