Accessibility links
After Years Of War, Ugandan Children Face New Deadly Threat : Parallels Uganda has lost one generation to a brutal, decades-long war. Now, a second generation is jeopardized by a strange disease known as nodding syndrome, which affects only children in parts of Africa and has no known cause. 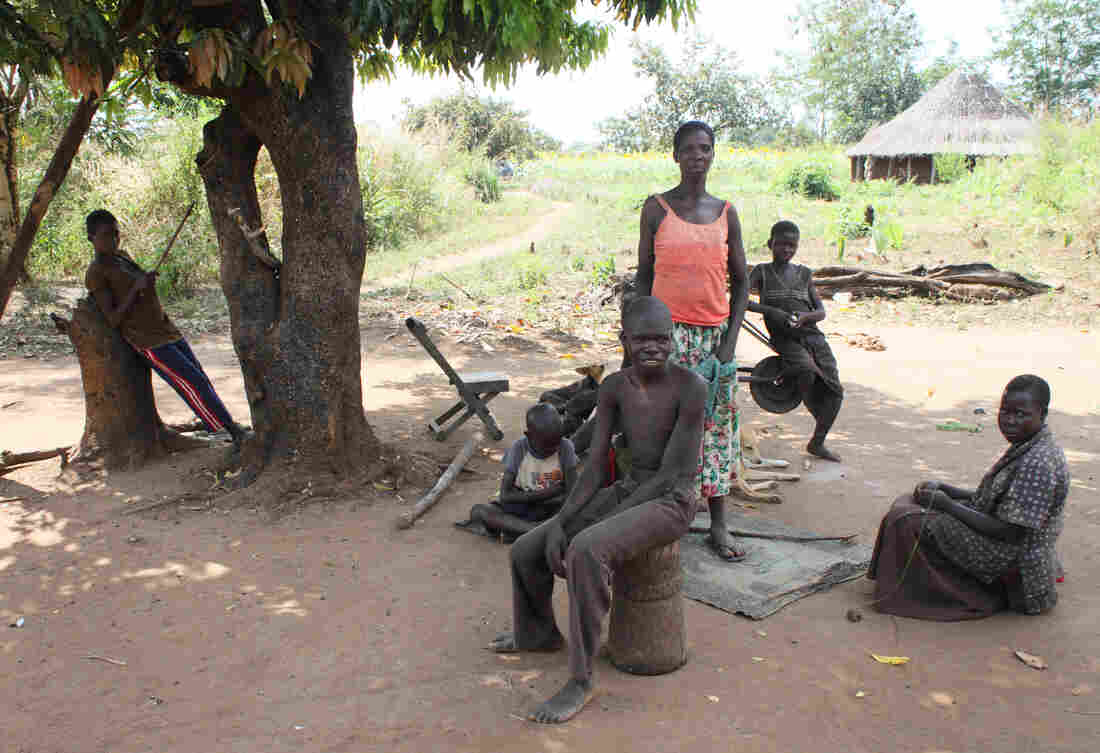 Grace Aber stands in the shade of a mango tree with her children in the remote village of Tumangu in northern Uganda. Four of Aber's nine children have been diagnosed with nodding syndrome, starting with Partick (front), who first showed symptoms in 2002. Matthew Kielty for NPR hide caption

The village of Tumangu, in northern Uganda, defines remote. It's hard even to find on maps. But it shows up frequently in news stories. Grace Aber is about to show me why.

She leads me down a narrow dirt path, passing a couple of clay huts. We get to a big mango tree. Aber's 17-year-old son, Patrick, sits under it. His shoulders are slouched. His eyes look like glass.

Aber tries to get him to say his name. A small grunt is the only sound he makes.

Patrick wasn't always like this, Aber says. He used to love going to school, reading. But a decade ago, when he was about 6, he began to change.

"It started with the nodding of the head," Aber recalls.

First the nodding, then seizures, with Patrick writhing on the ground, screaming.

Aber didn't know that what she was witnessing was the onset of what is known as nodding syndrome, a strange and debilitating illness that affects only children in a small pocket of East Africa. Its cause is unknown.

Patrick's convulsions continued a few times a day, every day. He stopped growing. He stopped talking.

And then, a year later, Aber noticed Patrick's little sister, Amiro Alice, stumbling around. A few days later, Aber realized that Alice was also nodding. A couple of years later, a third child. Then a fourth.

"My heart was scared. How does this disease catch someone?" she asks. "We want researchers to tell us the ways that someone catches this disease."

Scott Dowell, with the Centers for Disease Control and Prevention in Atlanta, is leading its investigation into nodding syndrome. Usually, he says, investigators can figure out the cause of a strange outbreak after just a few weeks. This hasn't been the case here.

"Nodding syndrome is definitely unusual in that it's a much tougher nut to crack," he says.

For more than three years, epidemiologists at the CDC have been trying to crack it. They've gone to northern Uganda and collected blood samples, tissue samples, spinal fluid. Dowell says they've looked at all the infectious causes that CDC can test for, but the explanation is still not clear.

As a consequence, says Paul Bukuluki, a researcher in Uganda, people are trying to find their own answers. Bukuluki isn't interested in the cause of nodding syndrome, but rather, in how people can cope with the illness — and the unknown.

So, for the past year, Bukuluki and a small team of researchers have been traveling to the affected region of Kitgum, asking parents what they think the cause is. And he heard the same thing repeatedly: the Lord's Resistance Army's brutal, two-decade-long guerrilla war in northern Uganda.

During the conflict, tens of thousands of children were kidnapped; people were forced into sex slavery; massacres were commonplace.

People fled their homes in droves. A decade ago, nearly 2 million people — about 95 percent of those living in the region known as Acholiland — moved into internally displaced person camps

And there, in the camps, children suffered from nodding syndrome — sometimes two, three or four children in the same family.

Santa Olok, who lives in Aber's village, also has a daughter with nodding syndrome. She is a member of the region's predominant Acholi ethnic group. For her, the cause of the disease lies in a tribal belief in ancestor spirits.

"The spirits of the people who died here [during the war]," she says, "who are returning to hurt or haunt the people."

Bukuluki says he heard this answer, too. And it matters to him because this sort of reasoning goes beyond just figuring out the cause of nodding syndrome. It tries to answer an entirely different question: Why us?

Because Tumangu, with nearly 100 children diagnosed with nodding syndrome, has suffered decades of chaos and loss.

"One generation lost due to ... the two-decade war," Bukuluki says, "and another generation now being lost to nodding syndrome."

Back at Aber's home, it's dusk, and she has just gotten back from the garden. She works there daily; she says she has to.

"But you cultivate half-heartedly because your heart is at home with the sick children. The problems we face with these children because of this disease are unspeakable. It is unbearable at times," she says. "Sometimes in frustration we just wish that they would all die so that we could rest. Our future is not here. What I think could help is not here."

Matthew Kielty is an NPR Above the Fray fellow, sponsored by the John Alexander Project, dedicated to supporting young journalists and finding untold stories.