Accessibility links
For Venezuelans, Kidnappings Are Simply Business As Usual : Parallels Latin American cities rank as the most violent in the world. The region suffers from sky-high homicide rates, drug wars and gang violence. NPR is examining the region's turmoil in a series of reports, beginning with a look at the rampant kidnapping problem in Venezuela. 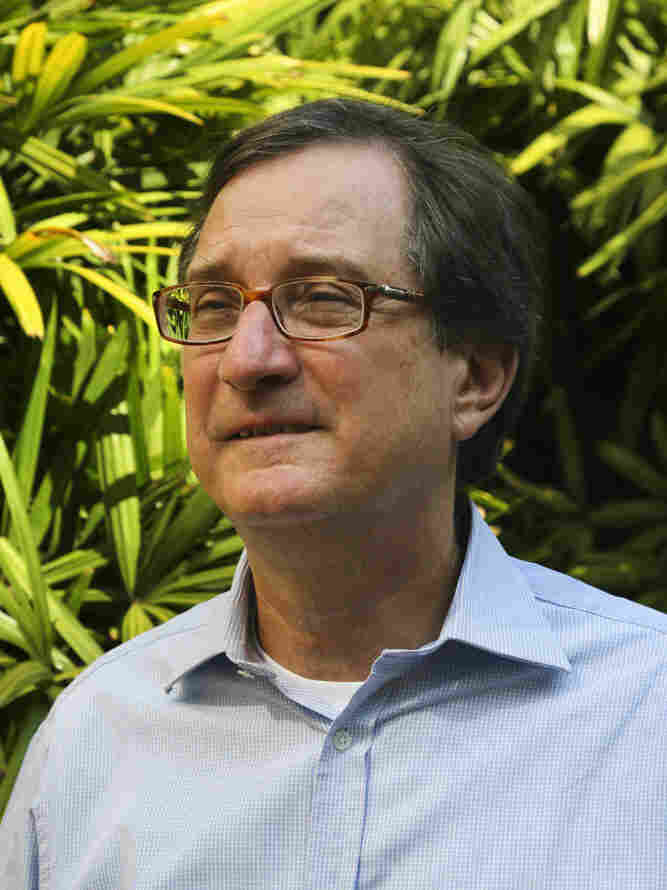 German Garcia-Velutini, a banker, was kidnapped in Caracas and held for 11 months in 2009. Now, he says, he is imprisoned by his bodyguards and feels free only when he is out of the country. Jasmine Garsd/NPR hide caption 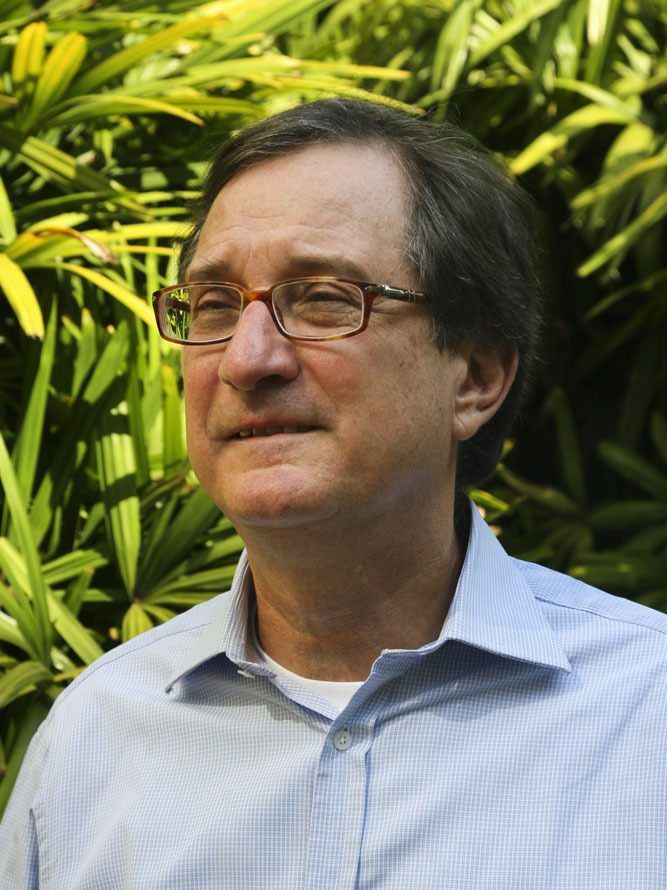 German Garcia-Velutini, a banker, was kidnapped in Caracas and held for 11 months in 2009. Now, he says, he is imprisoned by his bodyguards and feels free only when he is out of the country.

German Garcia-Velutini got into his car and left work one day. It took him 11 months to get home.

Kidnappers had nabbed the Venezuelan banker. His abduction is part of a problem that's been getting worse every year for the past decade in Venezuela, which belongs to a region riddled with crime and the most violent cities in the world.

Gracia-Velutini tells his story at an outdoor table at a hotel in Caracas, the capital, with a view of a mountainside that climbs into the clouds.

He recalls his departure from work that fateful day in 2009, which took him as usual to a highway ramp, where he had to hit the brakes.

"It was like a stopover by what I thought were policemen because of their jackets," he says. "They had long guns, automatic rifles."

Garcia-Velutini is a trim man, with glasses and a mild expression that matches his mild tone as he describes learning the men were not police.

"They took me out of the car and pushed me into another vehicle and injected me" in the thigh, he recalls.

"I passed [out] in seconds. ... When I woke up, I was being pushed in a small room. They took all my clothes," he says, leaving him only with a T-shirt and underwear.

The banker had fallen into the hands of professional kidnappers, who held him for months as they demanded ransom from his family.

"They were very proud of what they were doing. They took pride in their profession," says Garcia-Velutini, who came to that conclusion because of the kidnappers' elaborate techniques.

They kept him in one windowless room. Music played constantly so he would hear nothing from outside. Cameras followed his every move. He never saw his kidnappers, who pushed food and notes for him through a sort of doggy door. 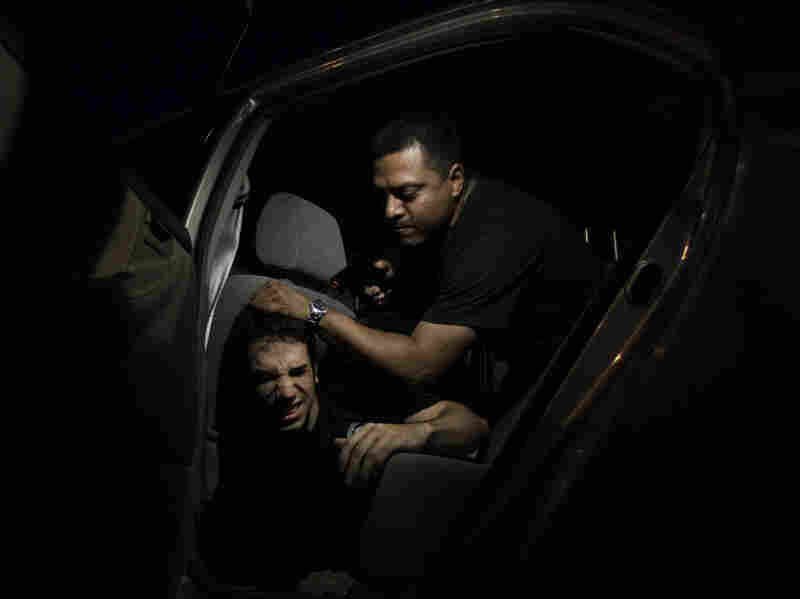 Two men participate in a kidnapping drill in an intensive self-defense course at the School of Personal Protection in Caracas. In 2011, there were 1,150 reported kidnappings in Caracas alone. It's widely believed that the vast majority of kidnappings aren't reported at all — in large part because many victims believe their kidnappers are police. Fernando Llano/AP hide caption 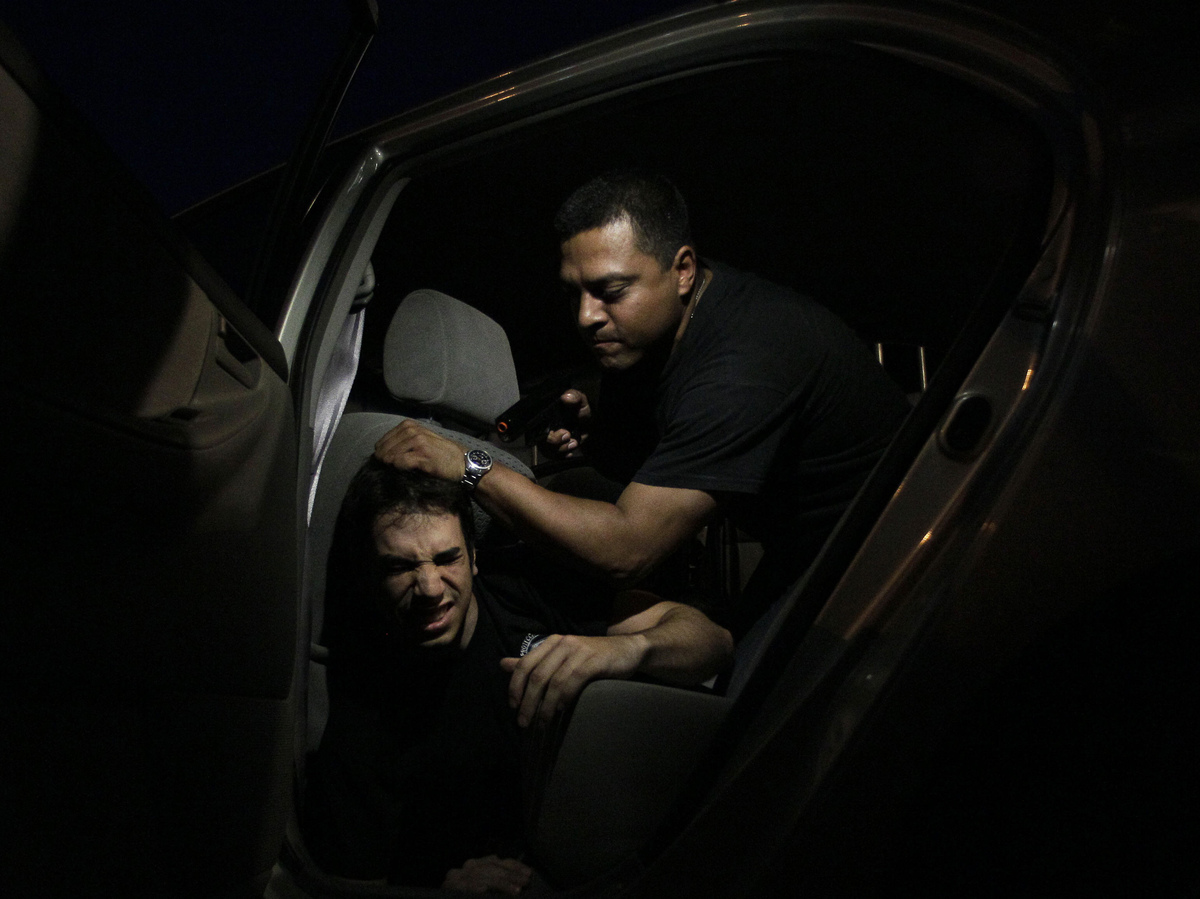 Two men participate in a kidnapping drill in an intensive self-defense course at the School of Personal Protection in Caracas. In 2011, there were 1,150 reported kidnappings in Caracas alone. It's widely believed that the vast majority of kidnappings aren't reported at all — in large part because many victims believe their kidnappers are police.

Garcia-Velutini says the original note was a set of instructions, such as not to yell or pound on the doors, and a list of questions, including "How much are you worth?"

"[It] is a terrible question because if you are kidnapped [for] political reasons, you have some principles that you can stand by," he says. "Money doesn't have principles. You're merchandise."

With Economic Rise, A Tide Of Crime

There's a lot of money to be had in Latin America. Brazil is a rising economic power. Mexico and Venezuela are enormous oil producers. Poverty is receding in many places. Some people are actually migrating to Latin America from troubled economies in Europe.

Yet the region's dramatic rise has come along with dramatic violence. Studies suggest that crime is so serious it measurably restrains economic growth.

Caracas had 3,800 killings just last year and now ranks as the world's third most violent city. The only cities ahead of it are also in Latin America — San Pedro Sula, Honduras; and Acapulco, Mexico.

In fact, when a Mexican think tank listed the world's 50 most violent cities recently, 41 were in Latin America.

Analysts say a variety of factors drive high crime rates, from income inequality to official corruption. The Venezuelan government itself once estimated that 20 percent of the country's crimes are committed by police.

One of the [security] advisers told me, 'Well, German, from now on, you're going to be kidnapped by bodyguards.' Now I ride in an armored car with escorts. It's a sense that you are not free.

German Garcia-Velutini, kidnapped and held for ransom for 11 months

Police are even suspected of playing a role in many kidnappings, which helps to explain why it's hard to measure the problem. Although the number of reported kidnappings has soared in recent years, it's widely believed that most kidnappings are never reported to the police at all. People don't dare report kidnappings because they don't trust the police. Occasionally kidnappers will tell their victims, truthfully or not: "Don't try to report this to the police. We are the police."

A Tale Of Two Daughters

The unreported kidnappings include that of the daughter of a woman we met in Caracas, who asked us not to use her real name. Instead we're calling her Chilena.

We had a glass of wine in her kitchen as she told her story. Four years ago, gunmen grabbed her adult daughter. Then they called Chilena's home, demanding money. It was up to Chilena to negotiate the daughter's release. 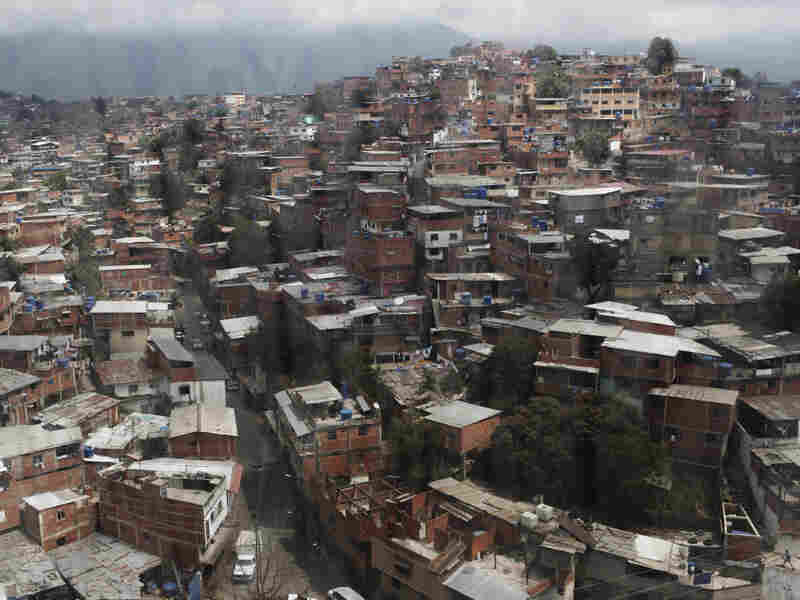 Kidnappings and other crime have infiltrated every aspect of daily life in Venezuela, especially the capital, Caracas, which was recently ranked the world's third most violent city. Rodrigo Abd/AP hide caption 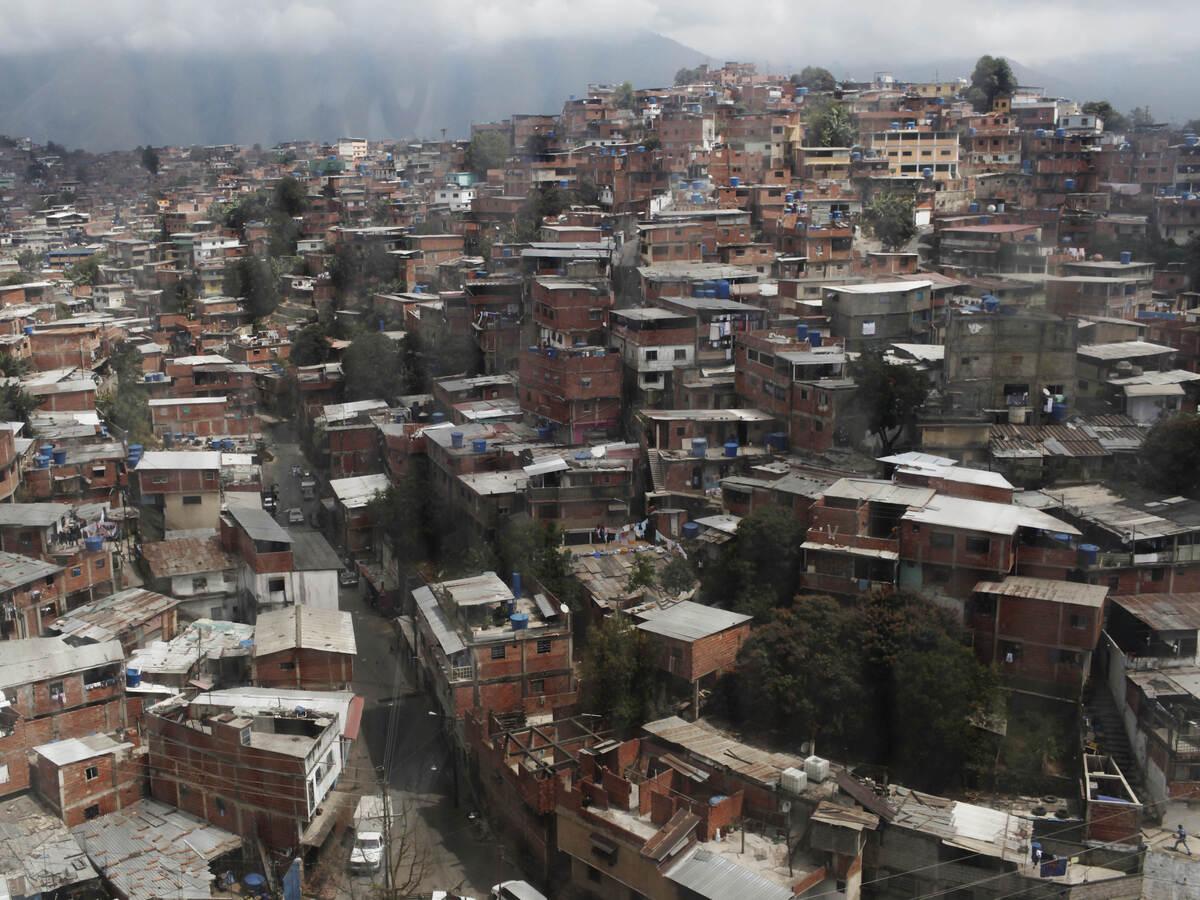 Kidnappings and other crime have infiltrated every aspect of daily life in Venezuela, especially the capital, Caracas, which was recently ranked the world's third most violent city.

"I thought that if I started crying, they could hurt my daughter," Chilena says. "I had to be as tough as they were."

Chilena refused to pay ransom, insisting she had no money.

Fortunately the kidnappers were in a rush and freed the daughter in exchange for the car in which she'd been kidnapped.

During the hours of negotiating, Chilena overheard one striking thing. A kidnapper asked her to hold on — while he took a call on another phone from his own daughter.

For him, this was just business.

Because of the tough negotiation, he had a somewhat disappointing work night. But the kidnapping industry has innovators constantly trying new ways to keep the money flowing.

We got a rundown of their innovations from Luis Cedeno of a Caracas organization called Paz Activa.

"Traditional kidnapping is when someone is taken, the family is called, they're asked for ransom," he says.

A different style of kidnapping is believed to be an import from Mexico: express kidnapping.

"They take you in your car and they go around to ATMs and extract money from your accounts. They go to stores, they buy expensive watches with your credit card, and then after maybe an eight-hour ordeal, they take your car but they leave you," he says.

The widespread fear of kidnapping has created a market for still more creative techniques, including what is known as the "virtual kidnapping."

That's when your phone service is cut off, and during those anxious hours when nobody can reach you, the virtual kidnappers pretend they've snatched you and demand a ransom from your family.

"You don't get kidnapped, but your family thinks you're kidnapped," Cedeno says.

In Venezuela, An Abduction Highlights A Scourge

Like many businesses, kidnapping also takes advantage of telemarketing — done from prisons, he says.

Inmates make calls to countless people on a list, saying, "We know who you are, we know the name of your children." Some percentage of people will pay rather than risk being kidnapped.

The most terrifying style of kidnapping remains what happened to Garcia-Velutini, the banker who spent months in that windowless room, struggling to keep his sanity.

He lined up fingernail clippings on the floor to keep track of the passing days. He had nothing to read but a Bible. He became more deeply religious. Once his family finally negotiated his release, the banker wrote a short book called Dios en mi Sucuestro, or God in My Kidnapping.

His religion gives him comfort, though not security. That's a fact that affects his daily life every day since his release.

"One of the [security] advisers told me, 'Well, German, from now on, you're going to be kidnapped by bodyguards,'" Garcia-Velutini says. "Now I ride in an armored car with escorts. It's a sense that you are not free."

To feel free, he must leave Venezuela.

"The most incredible [feeling] is the day I go to the airport and pass through immigration. Then I'm free, completely free," he says. "And then if I visit any city, I just walk. I don't need to go to museums, shops, anything, I just walk in the city. It's a wonderful sense to be able to walk, free."

Free, that is, until it's time to return to Caracas.

When we said goodbye in Caracas to German Garcia-Velutini, he walked swiftly to his car and climbed into the back seat.

A driver, and a burly bodyguard, took up the seats in front.