Accessibility links
Criminals Fleeing Rio Crackdown Set Up Shop In The Suburbs : Parallels As part of NPR's series on crime in Latin America, we're looking at Brazil's efforts to occupy and clean up Rio's crime-ridden favelas, or shantytowns, before the World Cup and the Olympics. But as a consequence, criminals have dispersed to outlying areas where there are fewer resources.

The provincial town of Mage seems a world away from the violence and drug dealing that plague Brazil's larger cities. On a recent afternoon, the central square is a picture of calm. Children play around a fountain; older people sit on the many park benches dotting the area, under the shade of trees.

Mage, about 35 miles northwest of Rio, is close enough that people can commute to the city, which many of them do. Yet it's far enough away that nothing much really happened here in the past. But residents say that is changing.

"There has always been a drug trade, but here compared to Rio, it's always been quite small," one resident says. "But now, there are different people coming in, from different places." 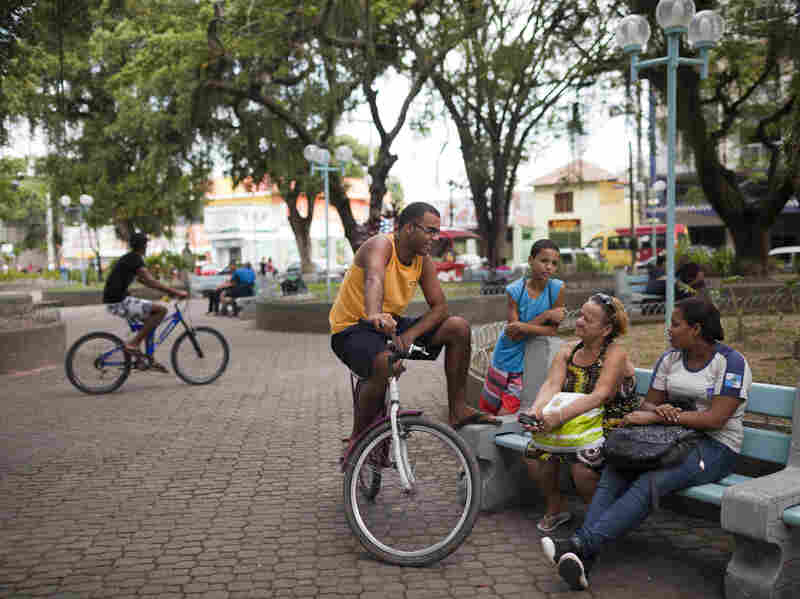 Residents socialize and children play in the tranquil plaza of Mage, a small town that has seen an increase in violence as pacification efforts in Rio de Janeiro are forcing drug traffickers out of the capital's favelas, or shantytowns. Lianne Milton for NPR hide caption 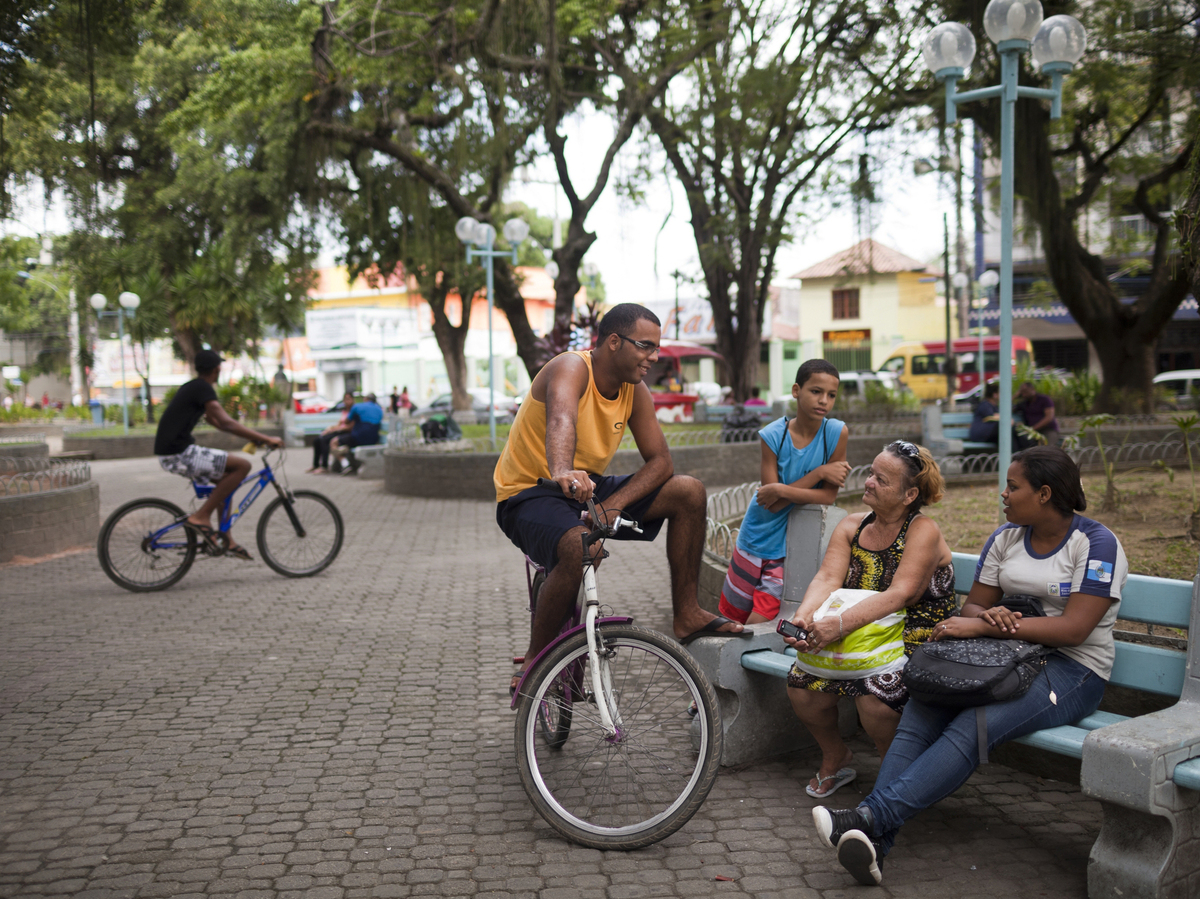 Residents socialize and children play in the tranquil plaza of Mage, a small town that has seen an increase in violence as pacification efforts in Rio de Janeiro are forcing drug traffickers out of the capital's favelas, or shantytowns.

He's from Mage but doesn't want to give his name. In fact, nobody in Mage wants his name used, fearing retribution from the drug gangs.

"There is a general feeling that things are much worse now than they used to be a couple of years ago," the resident says.

He recounts how just the other night he was awakened by the sound of heavy machine gun fire, a sound that's unusual in Mage. And people in Mage say the increased insecurity is a direct result of the "pacification" program in Rio.

Several years ago, in preparation for the World Cup in 2014 and the Olympics in 2016, Brazil began its policy of pacification, or sending specialized military police units in to occupy Rio's crime-ridden favelas, or shantytowns. The intention was to provide a permanent presence that would curb violence.

In certain favelas, it's been a success so far. Places once controlled by the drug gangs are now seeing new restaurants open, and there's little or no violent crime.

But the program has had unintended consequences. Critics say the problems haven't been solved. Instead, criminals have only been dispersed to areas where there are fewer resources and less visibility.

"Criminals in pacified favelas, they are not being arrested. All of them ... are running away," the Mage resident says. "So when these criminals run away they come to Mage, Niteroi, which are cities which are close enough to the capital, but are [unpoliced] so they are free for them to go in and do their business."

Rio is the focus. Everything goes there and then if anything is left over we get it here. The priority is the mega-events.

Another older man describes the gunfire he also heard the other night.

He lives on what was a pretty quiet neighborhood in Mage — with small, well-tended houses, a few with plants and flowers, others painted varying shades of pastels. The green hills of this mostly agricultural area frame the district.

It's midafternoon and it feels safe and intimate. People here say that until recently this was the kind of place where you would drop into someone's house and grab a beer from the fridge if he wasn't home.

But just up the road is a place they've now dubbed the "Gaza Strip" because of all the violence there recently.

With violence getting closer, the older man says he is worried. The new drug dealers here are 13 ,14, 15 years old, he says, and are bringing new habits with them. 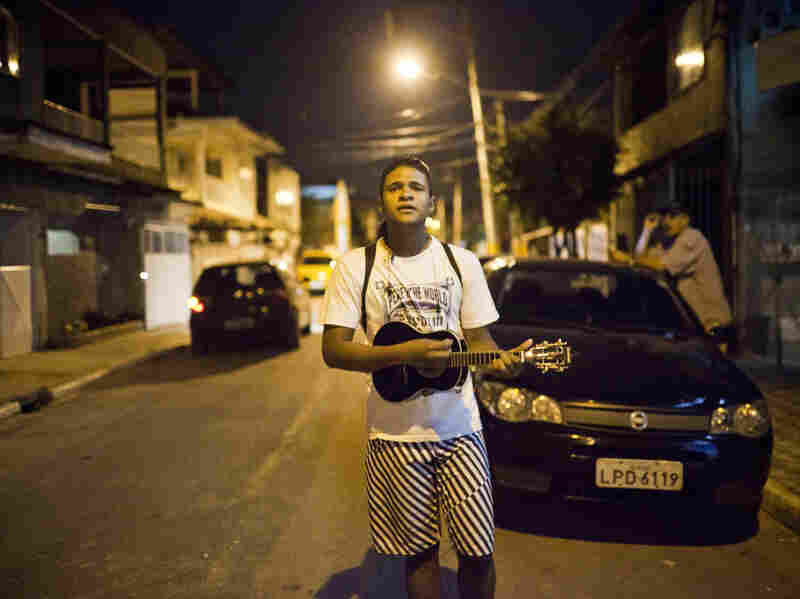 As the streets clear during the evening hours, a young man plays a ukelele-like instrument called a cavaquinho in a residential neighborhood of Mage, where residents can hear evidence of increasing gun power. Lianne Milton for NPR hide caption 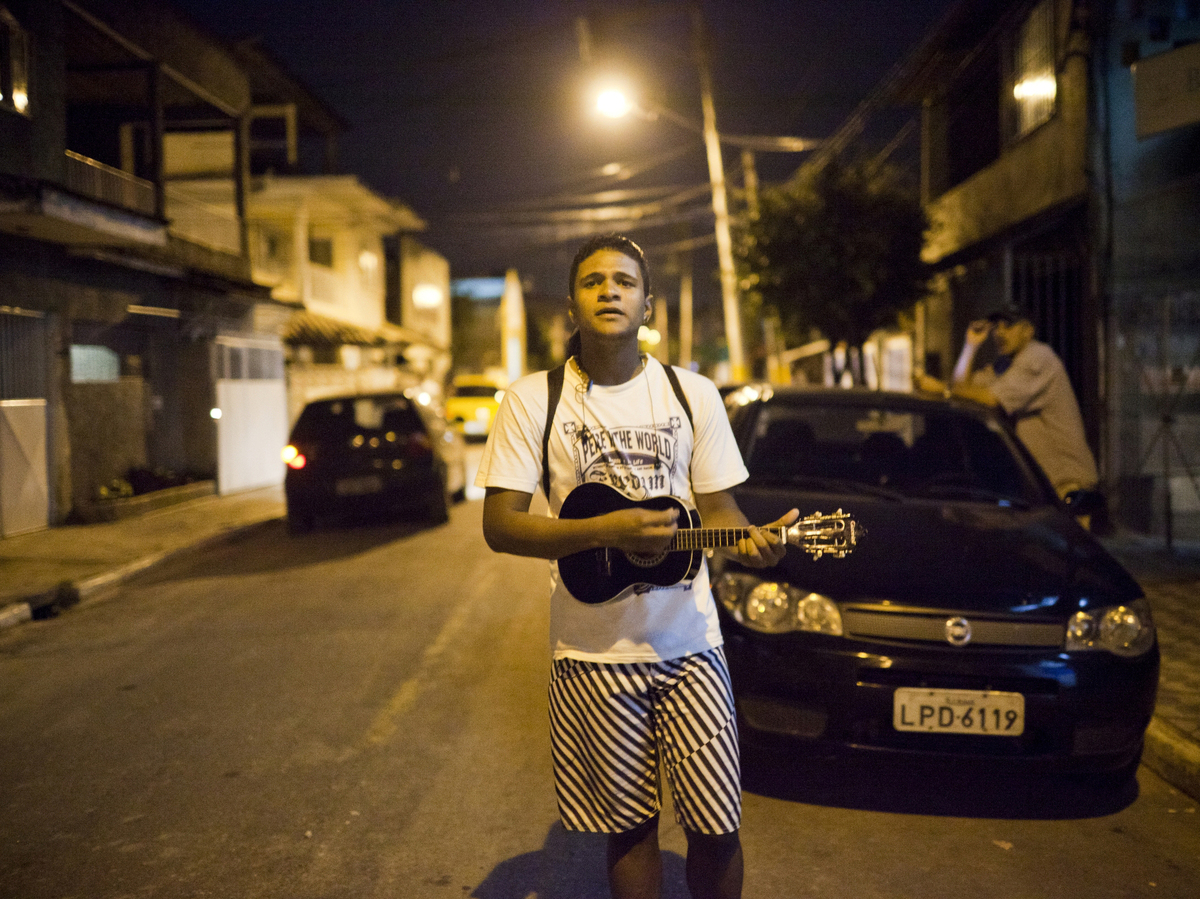 As the streets clear during the evening hours, a young man plays a ukelele-like instrument called a cavaquinho in a residential neighborhood of Mage, where residents can hear evidence of increasing gun power.

"They've had a baile funky dance a few times here now across the railroad," he says. "We never had that before, it's stuff from the favelas in Rio. The new people want to influence the local people."

Funk dance parties have actually been outlawed in many pacified favelas in Rio, where drug gangs presided over them and the music glorified the gang lifestyle. It's a worrying sign to people in the community that they are having them here now.

The man says he's afraid to let his teenage son wander out late these days.

"Here you used to see petty criminals armed with at most a pistol," he says. "Now these new people are carrying heavy weapons."

He explains that Mage has always dealt with violence. It has a high homicide rate, but it's mostly due to an ingrained gun culture that sees people take the law into their own hands when there is a personal dispute.

This is different, he says — the criminality here is still manageable but he worries that in five or 10 years it will be just like Rio. And he accuses the authorities of not doing anything to stop it.

A military police officer who is from Mage but works in Rio's favelas agreed to talk to NPR on the condition we did not use his name.

He says the problem for law enforcement in towns like Mage isn't a lack of will but a lack of resources. He says that all the resources are being put into Rio ahead of the games.

"Rio is the focus. Everything goes there and then if anything is left over we get it here," he says. "The priority is the mega-events."

In The Hills Of Rio, Shantytowns Get A Makeover

"The criminality hasn't ended. What happens is that they announce in advance when a favela is going to be pacified and many of the gang members flee," he says. "All of the interior of the state has gotten worse; the criminals migrated here."

And he says there isn't much interest in doing anything about it because places like Mage are far from the spotlight of the upcoming games. This despite the fact there has been a population boom here. A new office in the area for Petrobras, Brazil's state oil company, is drawing new residents.

But he says the government doesn't care about the interior.

And he says glumly he doesn't believe pacification will work in the end.

"It's not sustainable," he says. "It's impossible to pacify all the favelas."

In Rio, activists maintain that the government isn't really trying to make life less dangerous for the poor who live in the shantytowns. They point to the fact that all the pacified areas are around the tourist districts, key infrastructure or vital roads. There are a thousand favelas in Rio, and only a few dozen have been pacified.

"Pacification is for the foreigners, for our foreign image," he says.

The sun starts to go down and the streets of this Mage neighborhood are slowly emptying, except for a lone teenager strumming a Brazilian version of a ukulele as he walks home.

Then, Mage becomes quiet as everyone shuts their doors for the night.