Accessibility links
In Colombia, A Town Badly Scarred By Wartime Rape : Parallels Women have made significant gains across Latin America. But sexual violence against women remains a pervasive problem. As part of NPR's series on violence in Latin America, we're looking at the problem in Colombia, where decades of war made women extremely vulnerable.

El Placer is a remote hamlet deep in southern Colombia, on the edge of the Amazon. Founded half a century ago by farmers who found it fertile and bucolic, its name means "The Pleasure."

But for women and girls in El Placer who suffered years of sexual assaults after an illegal armed group stormed in, the name is only associated with unspeakable violence and murder.

Brigitte Carreño, 25, is among the women who suffered. A feared local warlord in El Placer raped her when she was 12, leaving her with searing memories that remain vivid and painful to this day.

Gathering strength to talk on a recent day, tears rolling down her cheeks, Carreño explained how a top commander of a group of anti-guerrilla paramilitaries that had occupied the town lured her into his drab headquarters. 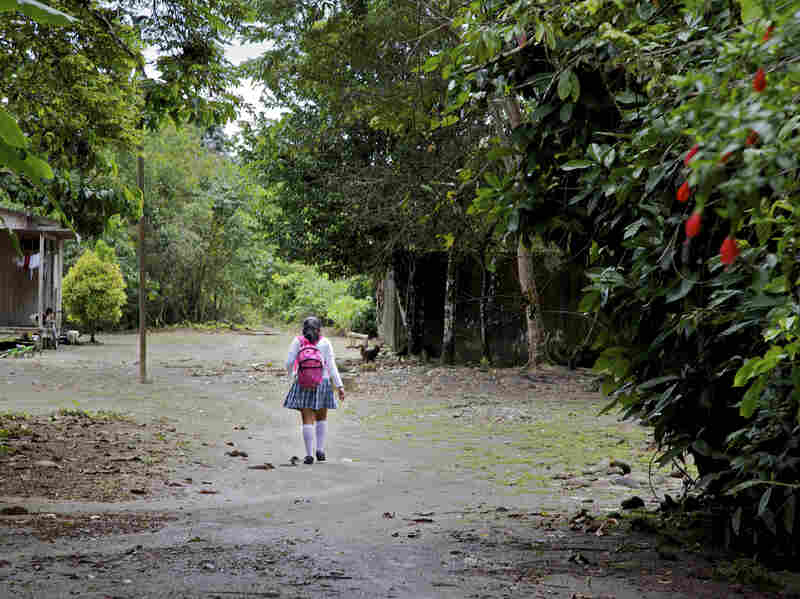 A schoolgirl walks home from school in El Pacer, Colombia. Paramilitary forces allied with the Colombian government against Marxist FARC guerrillas took over El Pacer in 1999 and controlled it through violence, including widespread rape. Paul Smith for NPR hide caption 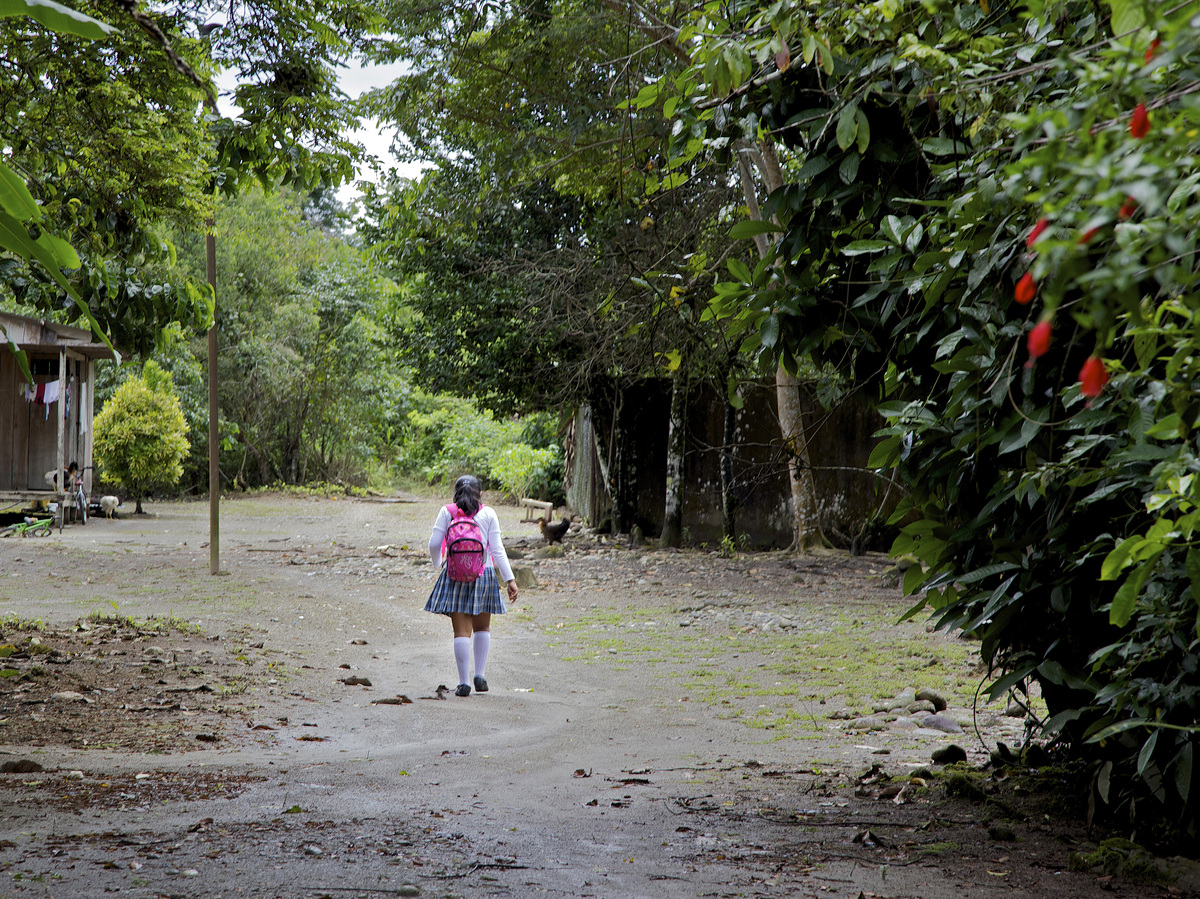 A schoolgirl walks home from school in El Pacer, Colombia. Paramilitary forces allied with the Colombian government against Marxist FARC guerrillas took over El Pacer in 1999 and controlled it through violence, including widespread rape.

"He tore off my shorts, and he tore off my underwear and I said, 'No,'" she said. "I don't know if it lasted minutes or hours, but for me it was an eternity. For me, it was the worst thing in my life."

She remembers limping home afterward. The pain was excruciating. "I felt as if I had a stick inside me," she said. "All night long, I kept my legs up. It hurt so much."

Women have made huge gains across Latin America. They hold high-powered jobs, from presidencies to Cabinet, corporate and judicial positions. In some countries in the region, including Colombia, female students outnumber male students in universities.

But women's rights groups say violence against women in the region is pervasive and sometimes horrifically violent, as underscored by a wave of acid attacks in Colombia. And now, rights groups and government investigators in Colombia are piecing together appalling crimes repeatedly perpetrated against women and girls in a long and shadowy civil conflict between the government and Marxist guerrillas known as the Revolutionary Armed Forces of Colombia, or FARC.

Today, with the state and rebels negotiating what could be an accord for later this year, there's a real chance for peace. But as talks progress, investigators from the Center for Historic Memory, a state-supported group, are unearthing details of war crimes and publishing in-depth reports on the atrocities.

"Gender violence, not just sexual violence or rape, has taken place on a gigantic scale in the armed conflict," says Camila Medina, a researcher with Historic Memory. But she says the crimes are not visible, though they are national in scope.

Indeed, Historic Memory and local prosecutors have outlined how a major paramilitary commander in the country's far north, Hernan Giraldo, had a virtual harem of underage girls whom he impregnated. Farther to the west in the Montes de Maria range, another commander snatched women in the towns his fighters controlled and forced them to have sex with him. In other communities, women were dismembered, their killers ensuring that survivors saw that their breasts had been hacked off.

Perhaps no town has endured the wholesale degradation of women as much as El Placer, which is reached by a bone-jarring journey on rutted, dirt roads. The town, just north of the border with Ecuador, is a collection of modest cinderblock homes, many of them decaying in the Amazonian sun and overrun with weeds and bugs. 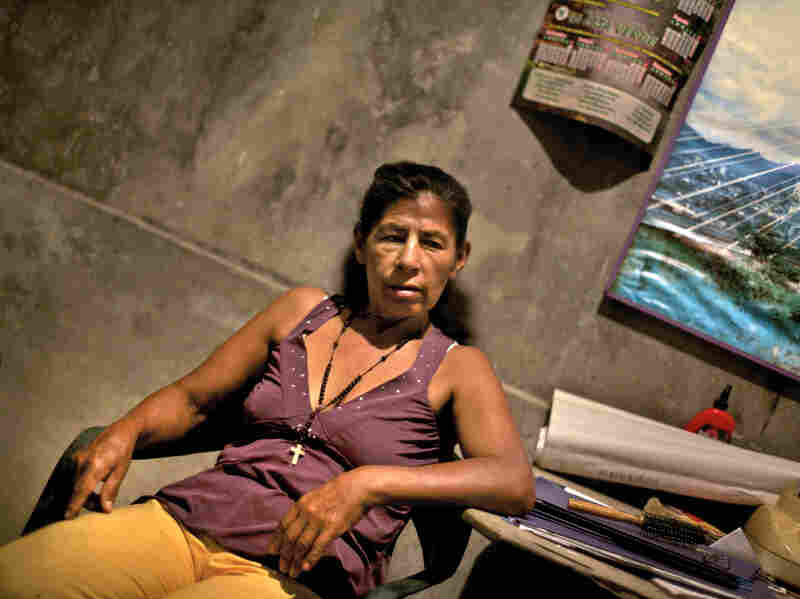 María Estela Guerrero has written a song about the conflict in El Placer, a town that her family helped found half a century ago. Now, fewer than 2,000 people live in the shattered settlement. Paul Smith for NPR hide caption 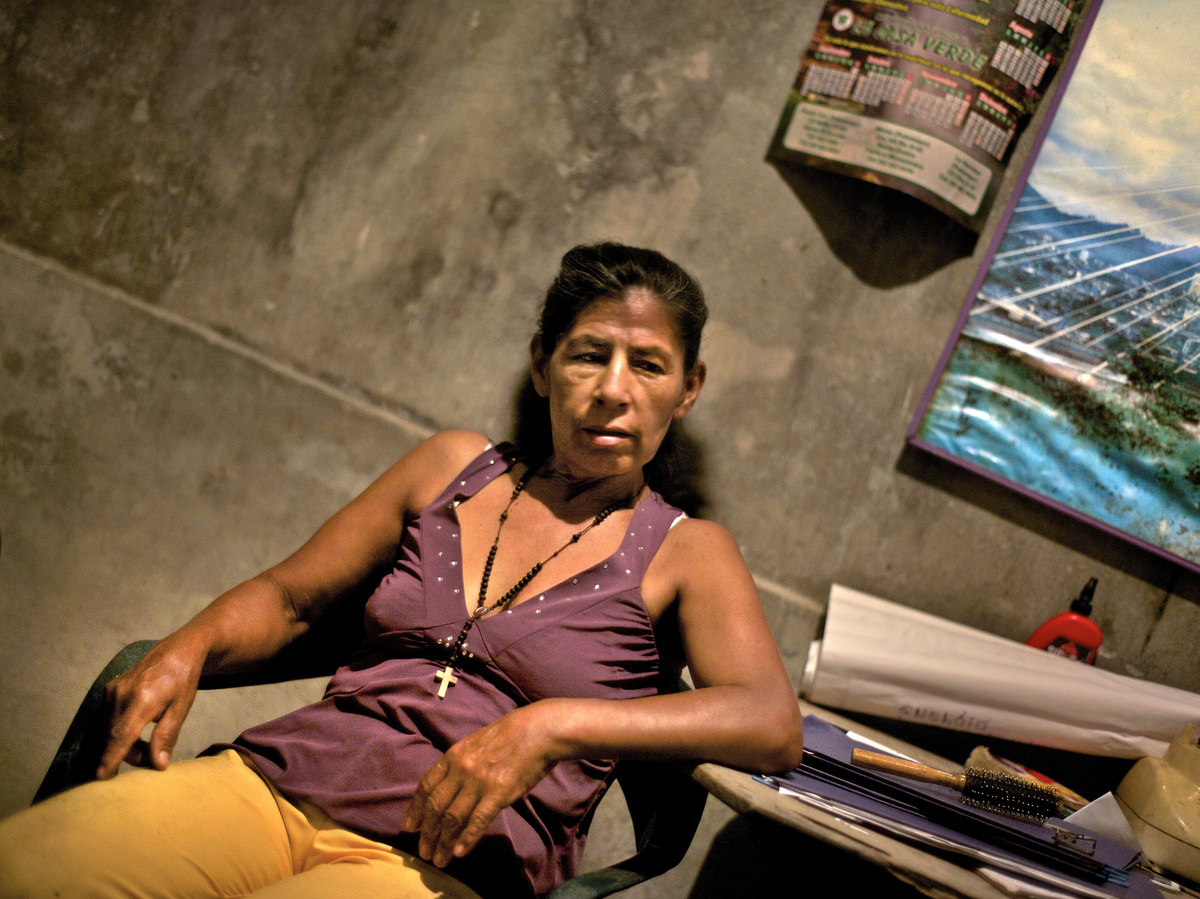 María Estela Guerrero has written a song about the conflict in El Placer, a town that her family helped found half a century ago. Now, fewer than 2,000 people live in the shattered settlement.

Fewer than 2,000 people live in the hamlet today. But it was once home to nearly three times as many, bustling with schoolchildren and markets where peasant farmers sold their crops.

Maria Estela Guerrero, whose family was among those that founded El Placer, has written a long song about how the community was plunged into despair and violence when paramilitaries arrived one Sunday in 1999 to battle rebels over the region's lucrative drug crops.

"Our streets were covered in blood," she sang on a recent night to a flickering light. "They had schools where they trained. They had places where they tortured."

Allied with the Colombian army, the paramilitaries were an illegal militia of hardened fighters that used terror to erode support for the rebels. Their forte: massacres of villagers. And in the group's first big incursion to El Placer, they killed 11 villagers.

With no state presence in El Placer or other nearby hamlets, the paramilitaries stayed for seven years, their occupation ending only when the national paramilitary movement disarmed in 2006.

What really marked the paramilitary occupation was how women became virtual slaves — forced to cook and clean, forced into prostitution. Some women were accused of being rebels and were raped and killed. Other women deemed undesirable, such as prostitutes who were HIV-positive, were also killed. Researchers from Historic Memory said these kinds of crimes were predominantly carried out by paramilitaries during the conflict, though in El Placer it was on a greater scale than in other communities.

"What they wanted to do, they did, especially when it came to women," says Jose Elias Benavides, a community leader. "They abused them a lot and they made them do what they wanted. They detained girls, young women on the roads and they took them to the places where they were."

At El Placer's school, Alba Gelpud, a veteran teacher, remembers how paramilitary commanders would barge into classrooms and take out girls they liked, the teachers powerless to put up a defense against heavily armed men. Girls as young as 12 became prostitutes and in some cases, became pregnant.

"Those girls lost it all," Gelpud says.

Girls who fought back, like Paula Andrea Caicedo, were no match for the violent gunmen, who offered money so the girls would be with them.

But if the girls resisted, the men would rape them and take them away. Sometimes, the girls disappeared.

Caicedo was just 15 when she was lured into the town's paramilitary headquarters and raped. The ordeal traumatizes her to this day, she says, making her question her self-worth.

"Sometimes I feel I'm not a fit mother, that it's better to be dead," says Caicedo, who is now 25, weeping. She now has two children she raises on her own. But she talks of how sometimes she simply wants to end her life.

Brigitte Carreño, the young woman who was attacked at age 12, understands the trauma all too well. After being raped by a paramilitary commander known to townspeople as "Coco," she was attacked by others. All of them told her that her father, a grocer in town, would die if she spoke up.

"I had to go to where they were," she says, explaining how as a young girl, she believed that not showing up would mean the sure death of her father.

On a recent day, Carreño returned to El Placer for a visit. She said some things are good in her life — she has a 7-year-old daughter and a close-knit family. But the memories remain horrible, she says.

"To remember is so hard," she says, "I have a life where I just don't trust people."

And like El Placer itself, she wonders if she'll ever recover.