Accessibility links
Once Unsafe, Rio's Shantytowns See Rapid Gentrification : Parallels First came the day trips for foreigner tourists to the shantytowns. Now, young Westerners are living in formerly no-go areas — with yoga classes and sushi restaurants following. Business is booming in Rio de Janeiro's favelas, but some residents complain they're being priced out of the market.

A new gastronomic guide to Rio de Janeiro's shantytowns — for a cool $35 — has just been published. A new boutique hotel perched on top of one of Rio's previously most dangerous favelas is about to open. And yes, there is a jazz club and yoga, too.

These are new services catering to a new kind of favela resident.

"It's actually very conveniently located for my work," says Natalie Shoup, a 22-year-old American who lives in a favela called Babilonia, or Babylon. "This has a good amount of transportation to every part of the city. It's nice. It worked out really well." 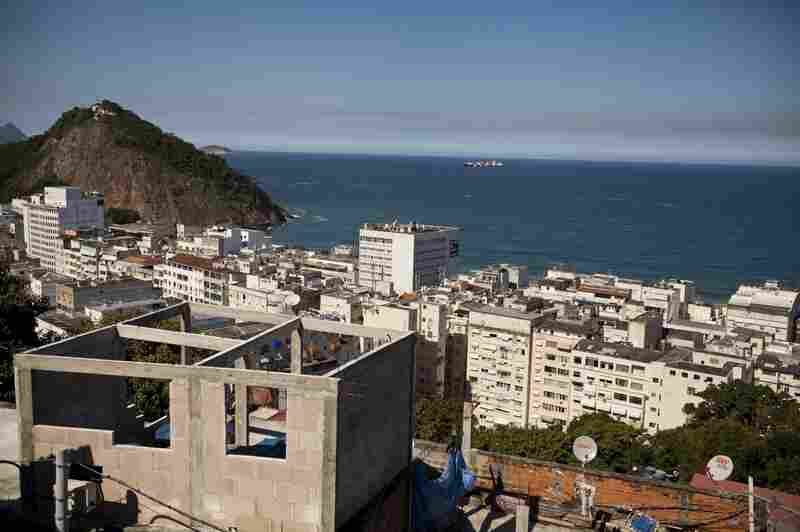 The small, hillside community of Babilonia, situated above the Leme and Copacabana neighborhoods in Rio de Janeiro, has ocean views. Lianne Milton for NPR hide caption 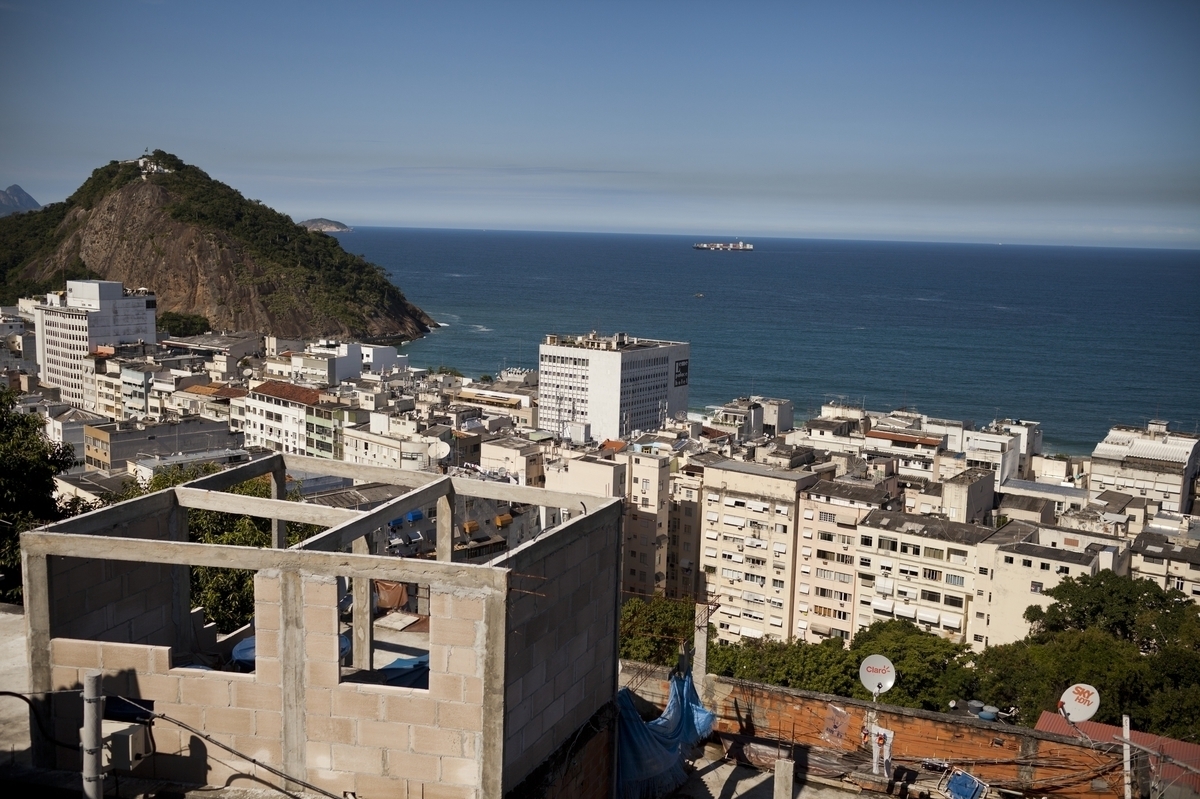 The small, hillside community of Babilonia, situated above the Leme and Copacabana neighborhoods in Rio de Janeiro, has ocean views.

Babylon, like many favelas, is located a short distance from the most affluent areas of Rio, where property is among the most expensive in the world. Shoup lives only a few hundred feet from the tourist beach at Leme. She says the main reason she moved to a favela was because it was cheap, but the low cost isn't why she stays.

"I always say I feel a lot safer at night walking here than I do in Copa or Leme," she says. "I like sprint through Copa or Leme when I get off the bus. When I get here, I say whoa, OK."

That feeling of security in favelas like Babylon is the result of a government project called pacification. In the past, police used to raid the favelas, battle with the drug gangs and then withdraw.

Now a specially created cadre of police called Police Pacification Units live and work in certain favelas full time, providing a permanent security presence. It's been a success in places like Babylon; the drug gangs have been driven out and now foreigners are moving in.

It's a similar story across town in the favela called Vidigal where 23-year-old Kate Steiker-Ginzberg lives.

"I have 180 degrees of ocean views living here in Vidigal," she says.

It's one of the ironies of Rio that its poor have the best views in the city. Many of Rio's favelas crawl up the city's verdant cliffs. The makeshift cinder-block homes sprout from the creases in the hills, overlooking the long white beaches and tourist hotels where the affluent come to play. In Vidigal, in particular, the views are breathtaking.

But it's not just the vista that attracts Steiker-Ginzberg.

"I think there are a lot of young people and a lot of students who come here with this idea of: How can we come and live here and really try and learn from a place?" she says. "How can we really try and insert ourselves in the community?"

There's another reason why many foreigners and Brazilians with means are coming to the pacified favelas these days — money. 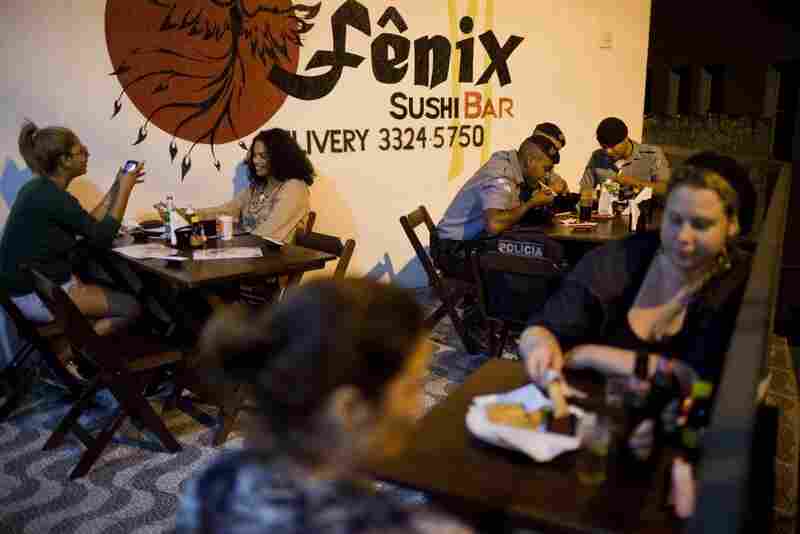 Members of the Pacification Police dine with local residents at the Fenix Sushi Bar in the favela Vidigal. The sushi bar is just one of several new businesses that attract people to the favela. Lianne Milton for NPR hide caption 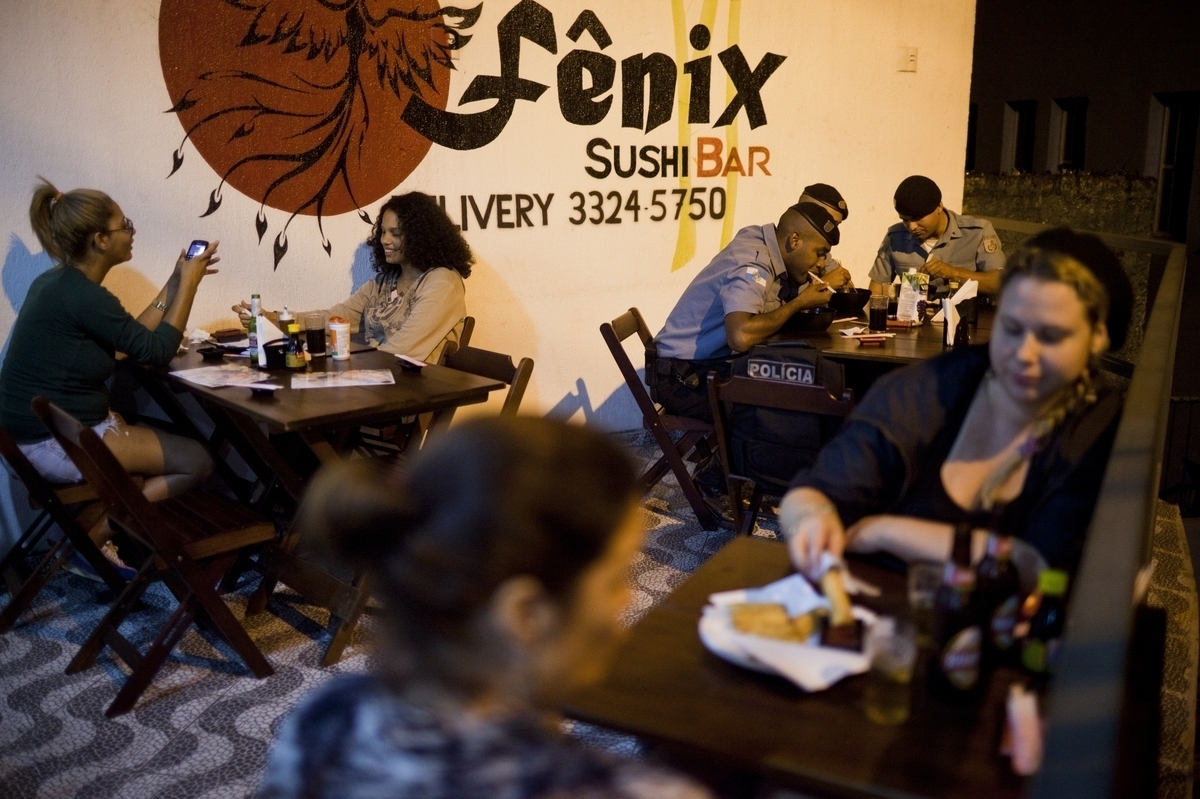 Members of the Pacification Police dine with local residents at the Fenix Sushi Bar in the favela Vidigal. The sushi bar is just one of several new businesses that attract people to the favela.

At the Fenix Sushi Bar in Vidigal, owner Nelio Pereira da Silva is on the phone wheeling and dealing. The sound from a nearby club blares out over the area. A Vidigal native and former tour guide, da Silva is now an entrepreneur. He not only owns the sushi restaurant, but is Vidigal's only real estate broker — and business is good.

It's a hot property market, he says, adding there are many speculators, including Germans, Americans, French and Italians. In 2006 you would pay $2,500 for a house, he says. Now that same house is worth $75,000. This is the moment to invest, he says, adding: It's hard to find places now, but this is the next big thing.

Gentrification is almost always complicated and controversial. There are still areas where the predominantly poor live, and the new developments are still few and far between.

At the top of Vidigal, Roberto Lorino is one of the success stories.

He says he opened his sandwich shop with the proceeds from the sale of his house for $100,000 to a "gringo," or foreigner. There are more foreigners buying here than locals now, he says. Pacification has been a good thing, he says. He adds: You used to have to pay taxes to drug gangs; now you don't. Many tourists come here now.

Other residents are building rooms to rent to tourists coming for the World Cup or the Olympics. Many have even started advertising on Airbnb.

She says the locals are being priced out of the market. Rents have gone up, and those who can't afford to pay are leaving the neighborhood to other, more dangerous favelas. The residents are not being allowed to enjoy the new security, she says. All the new restaurants and hotels are for the foreigners — not for us, she says.

Services too are still spotty: Garbage is strewn on the street; electricity and water cut out regularly.

Still, for many Cariocas, as the residents of Rio are known, the changes are a sign of hope.

Brazlian lawyer Moacir Prado, 75, is here on a day trip after reading about the new restaurants in the community in Rio's main newspaper. He lives by the beach and says he would have never ventured here before. As he stares over the makeshift houses out to the ocean and the glittering city below, he says his city has turned a corner.

This is the rebirth of Rio, he says.

But for every success story like Babilonia and Vidigal, there are other examples that show security and improvements are tenuous at best: A few days ago, drug traffickers briefly took over a favela that had been pacified for almost three years, ordering restaurants, shops and schools to shut. Among the business affected: one of the eateries profiled in the new glossy favela food guide.