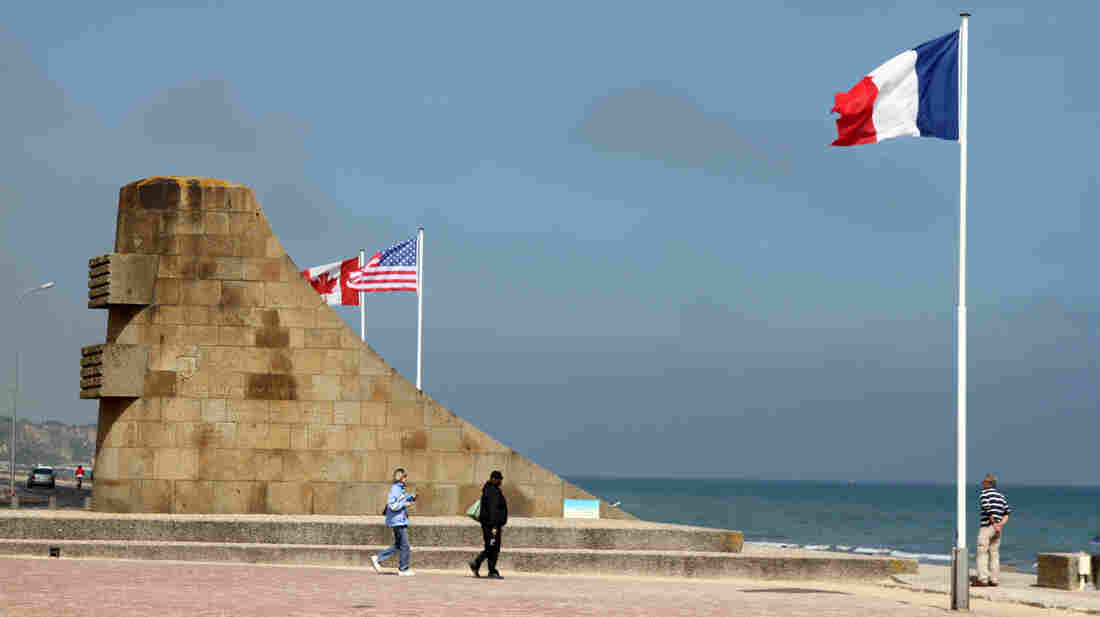 Omaha Beach near Colleville-sur-Mer in Normandy, France, where allied troops landed on June 6, 1944. A plan to build a wind farm off the coast has spurred controversy. Lars Halbauer/DPA/Landov hide caption

Music accompanies a fireworks display set off behind an old German gun battery overlooking Omaha beach in Normandy. Next year, on the 70th anniversary of the allied invasion, work is set to begin on a windmill park off this very coast — 75 windmills, the closest of which will be 6 miles from shore.

The wind is whipping high on a bluff above the British landing beach of Arromanches, where the hastily constructed landing harbor is still intact. Environmental activist Amaury de Lencquesaing opposes the windmill project.

He points out just beyond the Mulberry harbor where he says the windmills will be visible on a clear day.

"Erecting an industrial wind park is not compatible with this historic place — along these 10 kilometers of coast, thousands of soldiers came to liberate us," he says in French. "And for many, it's their final resting place. Now, 70 years later, in the name of the environment we are dishonoring their memory."

A Plan To Create Jobs

The wind park will be built by a German-Danish-French consortium led by EDF, the French state electricity provider.

Project director Bernard Guitton says the wind park is part of a larger plan to move France away from its heavy reliance on nuclear energy. It's also part of a commitment the country made to the European Union to increase its share of electricity generated by renewable energy to around 6,000 megawatts by 2020 along the coast, he says, and to "create an offshore industry in France."

That will bring jobs, Guitton says. He says the project did take into account the landing beaches, and he says he doesn't believe they will be negatively affected. The windmills will be a full 16 miles out from Omaha Beach, he says.

Two years ago, Butre's group succeeded in getting a windmill park at the famous Mont Saint Michel monastery pushed farther back.

He says not only do the windmills desecrate the D-Day beaches, they also cost a lot of money and will raise the price of electricity.

"It's a difficult fight, because you know, we are citizens. We are not working with lobbies," he says. "But in front of us, we have a fantastic amount of industry, money, lobbies, politicians. I don't know who's going to win, but we're going to fight."

'The Whole Area Is A Museum'

This time of year, the little towns and beaches along the D-Day coast are thriving with school groups, tourists and festivities. But they are empty for much of the year. Many people living here believe the employment and activity generated by the wind park would be a good thing. But visiting Briton Andy Greenwood and his friends don't agree.

"The French are very respectful of the past," he says. "I'm surprised that they're thinking of doing something like that for this stretch of ocean. What they've got here is history. ... The whole area is a museum."

Music from the war era plays out of a loudspeaker in the streets of Arromanches. Ninety-year-old British veteran Dennis Stuthridge wears a string of medals across his uniform.

What does he think about the wind park? "No problem," he says. "To me it'd be no problem." He calls it "progress." When asked if you can honor history and still move on, he replies: "Of course you can; you have to. Everything's got to move on."

He says he has "no problem at all."