Accessibility links
The Day Nelson Mandela Walked Out Of Prison : Parallels When the anti-apartheid leader emerged from 27 years of confinement, South Africans knew their country was undergoing a seismic change. But they didn't know where it would lead them. 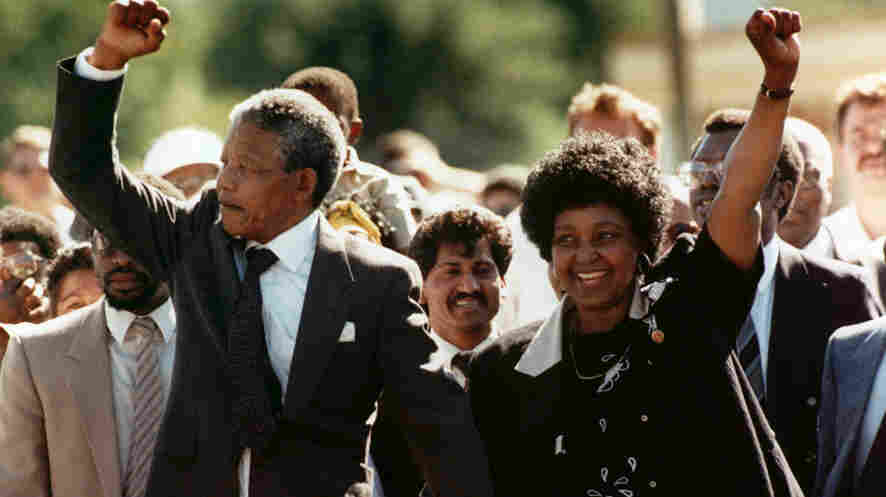 Nelson Mandela, with his wife, Winnie, walks to freedom after 27 years in prison on Feb. 11, 1990, in Cape Town. AP hide caption 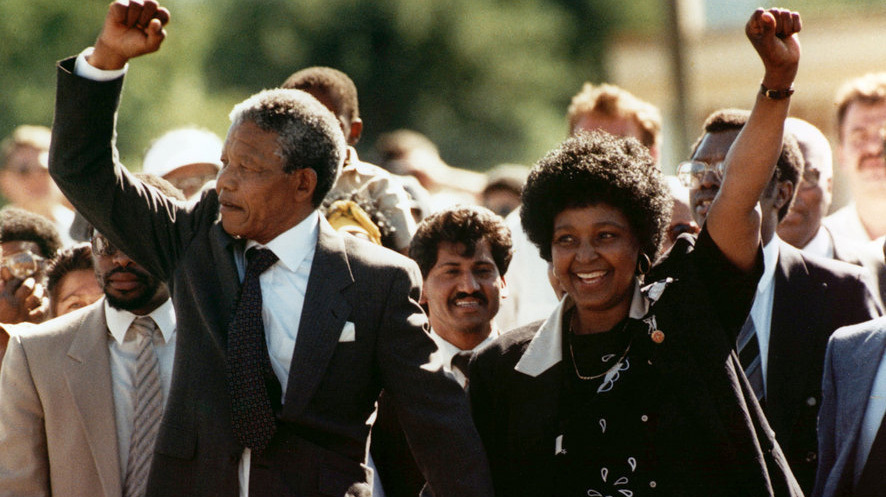 Editor's Note: Wednesday marks the 25th anniversary of the day that Nelson Mandela walked out of prison and entered the negotiations to end apartheid. Greg Myre, the international editor of NPR.org, covered Mandela's release and recounts that day.

The evening before his release from 27 years in prison, Nelson Mandela was ushered into a secret meeting with South African President F.W. de Klerk for a conversation that sounded straight from the theater of the absurd.

De Klerk told Mandela he would be a free man the next day, making good on a pledge the president had made a week earlier, though without setting the exact date. Yet Mandela was still caught off guard.

"I deeply wanted to leave prison as soon as I could, but to do so on such short notice would not be wise," Mandela wrote later in his autobiography, Long Walk To Freedom. "I thanked Mr. de Klerk, and then said that at the risk of appearing ungrateful I would prefer to have a week's notice in order that my family and my organization could be prepared."

Taken aback, de Klerk excused himself to consult with his advisers. Several minutes later, he returned and insisted that Mandela, like a house guest who had hung around too long, would have to check out the next day whether he liked it or not. Mandela relented, and the jailer and the jailed shared a glass of whiskey. 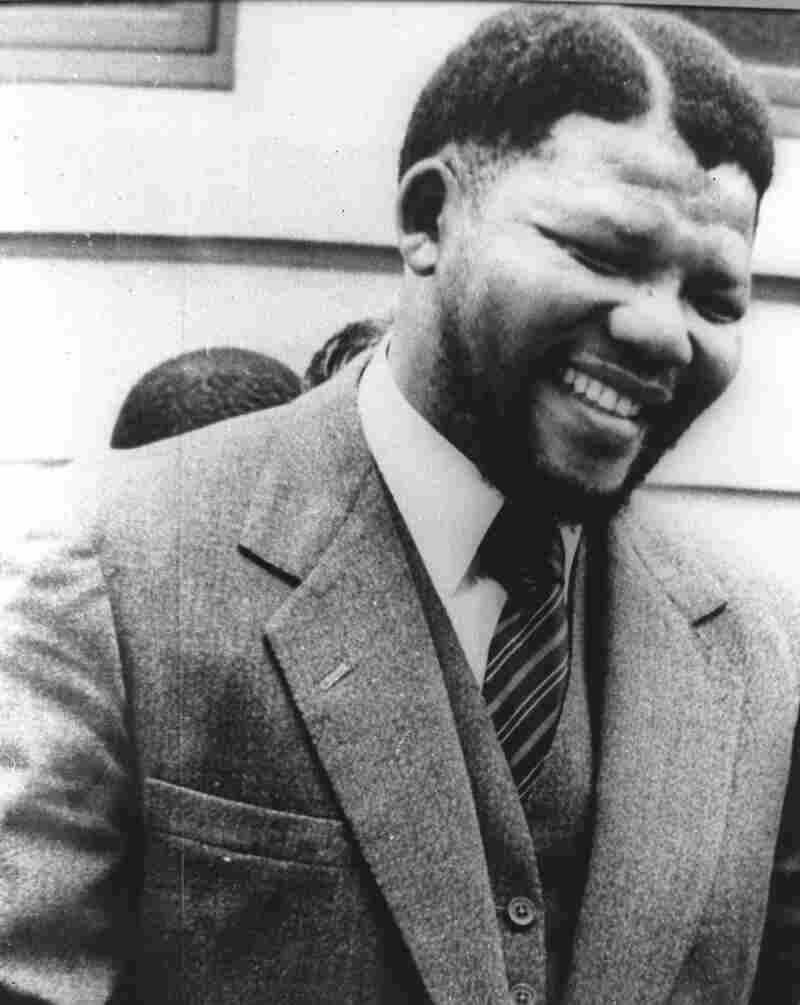 Nelson Mandela, pictured in the early 1960s, before he was sentenced in 1964 to life in prison for sabotage. The government did not release photos of Mandela during his many years in prison, and few people knew what he looked like at the time of his release. Reuters /Landov hide caption 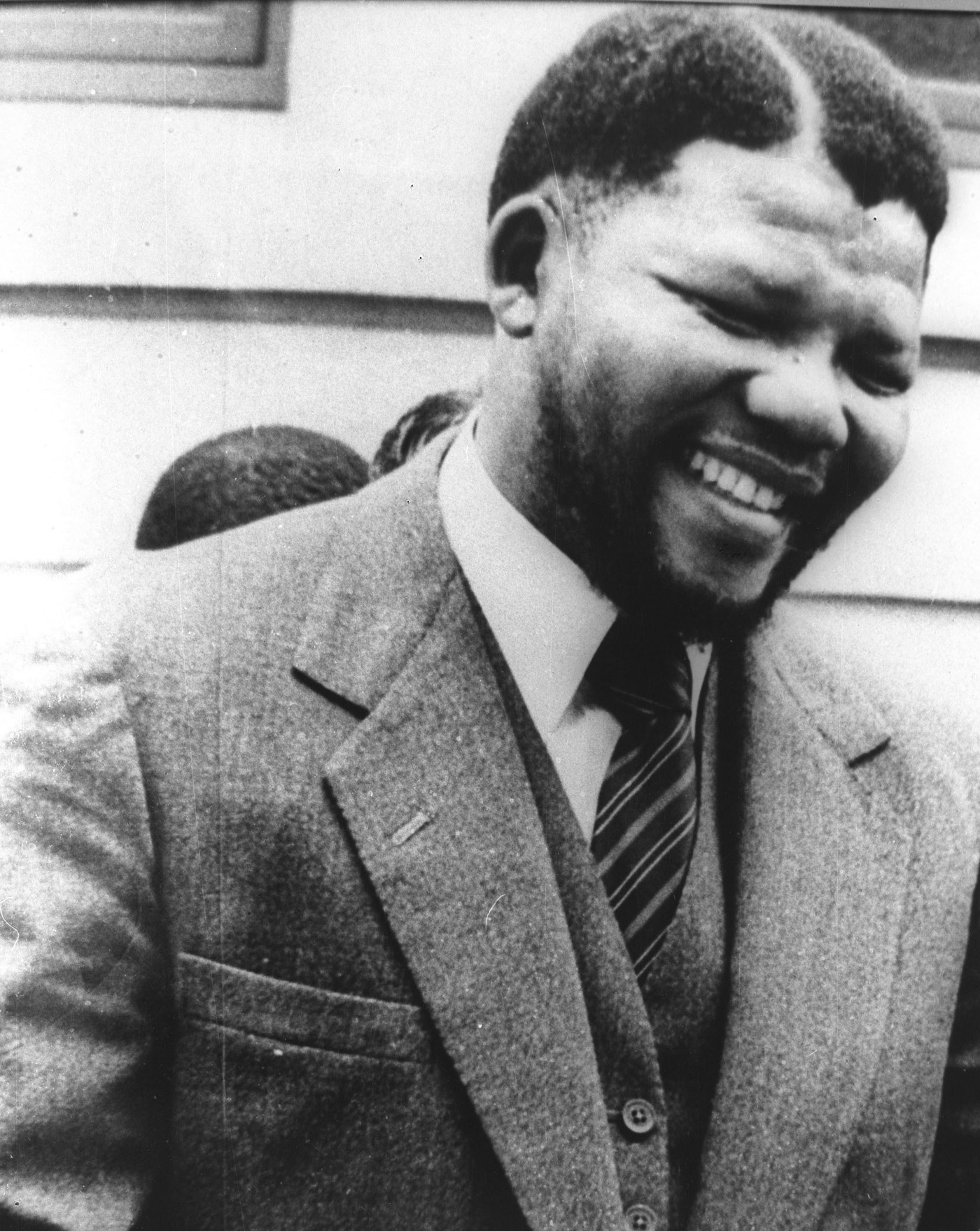 Nelson Mandela, pictured in the early 1960s, before he was sentenced in 1964 to life in prison for sabotage. The government did not release photos of Mandela during his many years in prison, and few people knew what he looked like at the time of his release.

It would be impossible to overstate the electric sense of anticipation that coursed through South Africa as Mandela's release grew imminent. Apartheid was still the law of the land, but de Klerk had declared sweeping changes that were rapidly dismantling the system of racial segregation. South Africans, black and white, knew their country was about to undergo seismic change, yet no one knew where it would lead.

The black majority saw Mandela as their deliverance from more than three centuries of white domination. Many whites feared his release could unleash an explosive civil war along racial lines.

As the nation projected its hopes and fears onto Mandela, the reality was that only a tiny circle of people had seen or heard him for the past quarter century.

Mandela had disappeared from view in 1964 after giving a four-hour speech at the conclusion of his sabotage trial, where he was convicted and received a life sentence. He was a rugged young man in his 40s, a former boxer who had full cheeks, a beard and mustache and was always dressed in a suit at his court appearances.

He spent most of his prison term on Robben Island, South Africa's version of Alcatraz. On this island fortress, Mandela often labored at a limestone quarry during the day, where the glaring sun harmed his eyes. At night, he could see the twinkling lights of Cape Town in the distance. The damp conditions on the island likely contributed to the tuberculosis he contracted.

During this time, Mandela's jailers, his fellow inmates and several family members were among the only people who saw him. The white government, in a futile attempt to diminish his reputation, never released photos of Mandela during his years of captivity.

However, the law of unintended consequences prevailed. As time passed and the anti-apartheid movement grew, Mandela's invisibility only added to his mythic status and helped transform him into an international icon.

Shortly after that odd meeting in Cape Town between de Klerk and Mandela on the eve of his release, the South African government reversed its long-standing policy and began handing out a photo of Mandela to the journalists who had converged on Cape Town.

It was a simple snapshot of Mandela standing stiffly in a suit and tie, and yet it was mesmerizing. He had gone gray, though he still had a full head of hair. He was clean shaven and had become noticeably thinner in his face and torso. He looked even more distinguished as an elder statesman than as the combative figure of the 1960s.

Still, there was no clue about what kind of leader he would be.

Would he be out of touch and too moderate for the young black activists born after he was incarcerated? Could he, or anyone, live up to his billing as a national savior? Would this 71-year-old man be up physically for the enormous demands of his new role?

An Explosion Of Joy

Mandela began to answer those questions shortly after he walked out the front gate of the Victor Verster Prison in suburban Cape Town on the sun-splashed afternoon of Feb. 11, 1990, arm-in-arm with his then-wife, Winnie. Each raised a fist in triumph.

Black South Africa exploded with joy. A raucous crowd of some 100,000 blacks squeezed into the Grand Parade grounds outside Cape Town's City Hall, infusing it with the energy of a rock concert. Mandela was to deliver his first speech there, at what was almost certainly the largest black crowd ever to gather for an event in what was still formally a white city.

Yet for several excruciating hours after he left prison, Mandela again vanished from public sight. His organization, the African National Congress, did not want the white South African security forces present in large numbers at his first public appearance. The ANC was worried about the both the symbolism and the potential for violent clashes.

However, the ANC, which had only recently been unbanned, had no experience organizing such a massive, unruly event.

This was the first of many such dances between the white authorities and Mandela's ANC as they launched negotiations that would ultimately bring down apartheid. 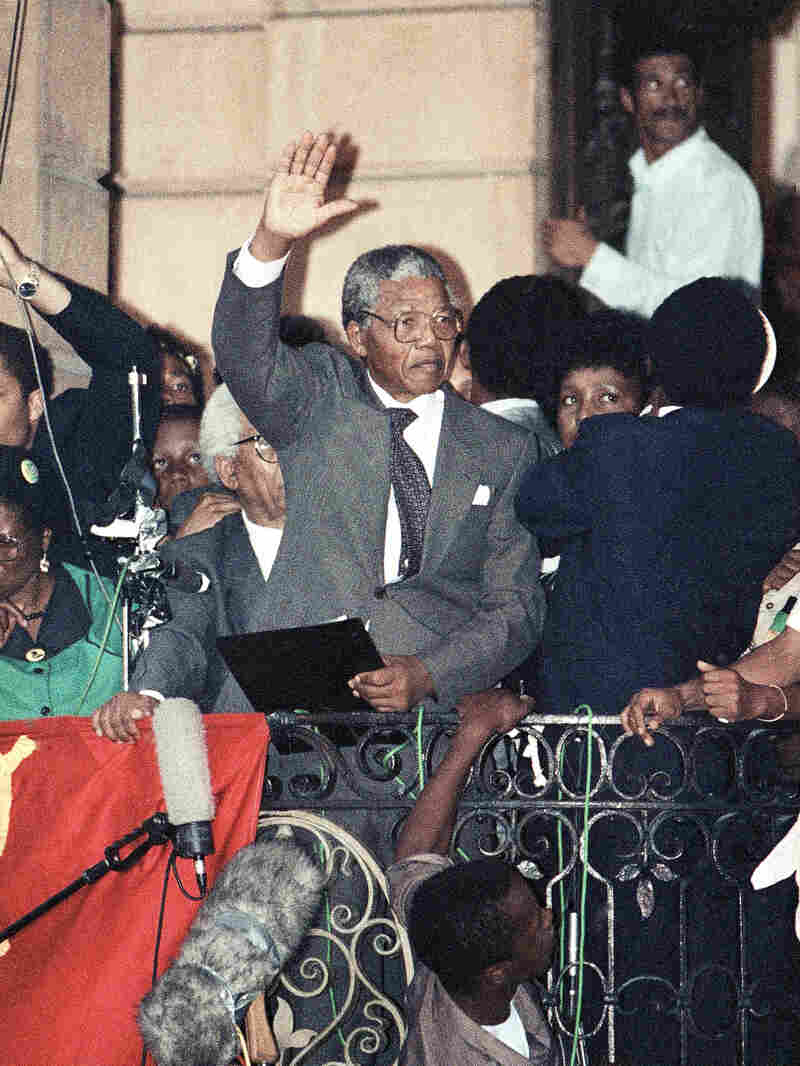 Several hours after his release from prison, Nelson Mandela made his first speech on the balcony of Cape Town's City Hall. As he prepared to speak, he realized he had left his glasses in the prison. So he borrowed a pair from his wife Winnie. Udo Weitz/AP hide caption 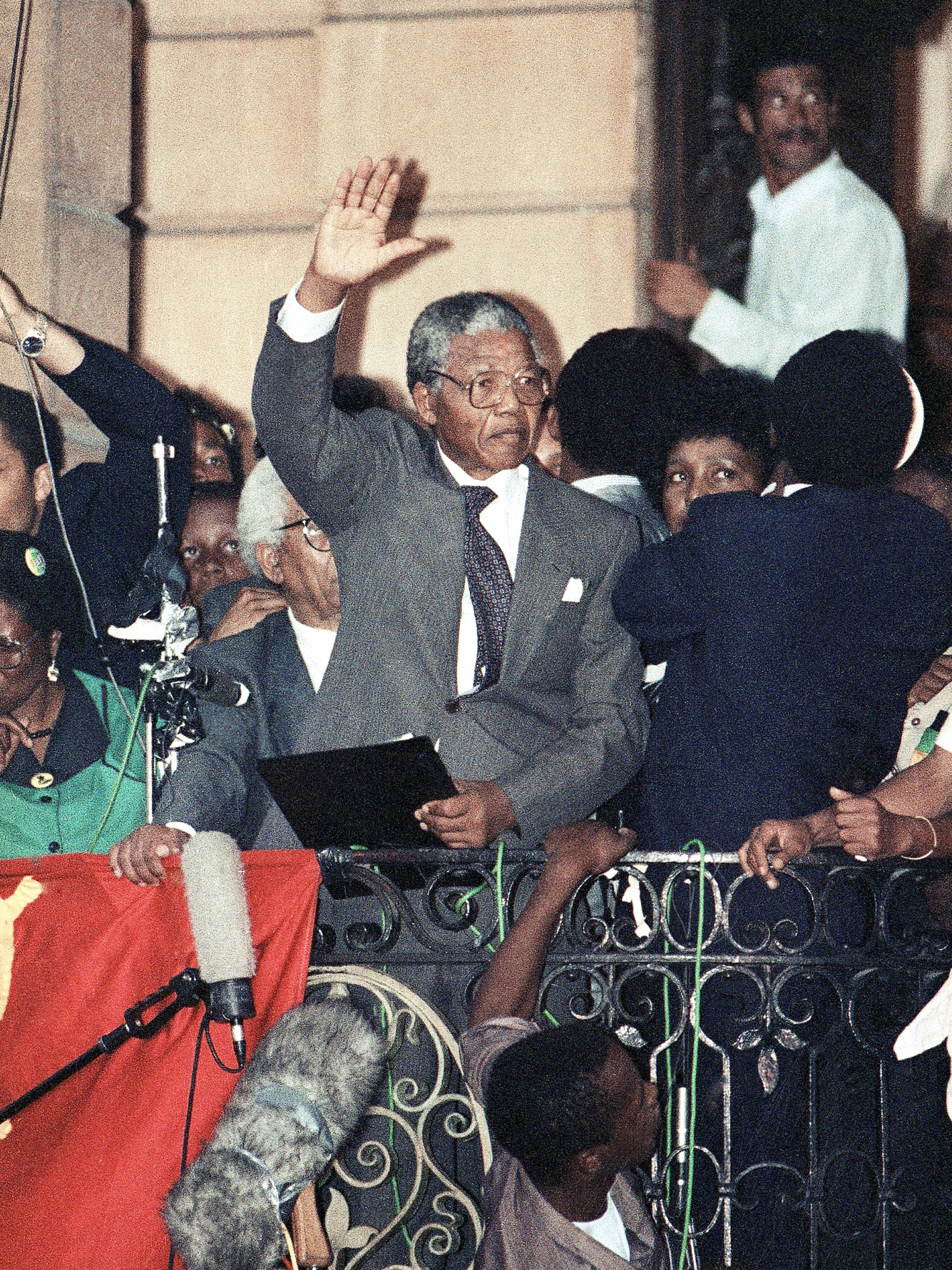 Several hours after his release from prison, Nelson Mandela made his first speech on the balcony of Cape Town's City Hall. As he prepared to speak, he realized he had left his glasses in the prison. So he borrowed a pair from his wife Winnie.

Meanwhile, Mandela's journey from prison to City Hall came to a virtual standstill as his car approached downtown Cape Town and was mobbed by supporters.

"People began knocking on the windows, and then on the [trunk and the hood]," Mandela wrote. "Inside it sounded like a massive hailstorm. Then people began jumping on the car in their excitement. Others began to shake it and at that moment I began to worry. I felt as though the crowd might very well kill us with their love."

Rather than continue into the crowd, Mandela diverted the driver to the nearby home of Dullah Omar, one of Mandela's lawyers. Omar was stunned to find Mandela at his front door. "Aren't you meant to be at the Grand Parade?" he asked.

Mandela went in for a cold drink at Omar's home, but shortly afterward Archbishop Desmond Tutu called in great distress.

"The people are growing restless. If you do not return straightaway, I cannot vouch for what will happen. I think there might be an uprising," Tutu told Mandela.

Mandela got back in the car, only to be mobbed again as he approached City Hall. He eventually arrived at twilight, facing a sea of frenzied supporters from the balcony. He took out his prepared remarks ... and realized he had left his reading glasses at the prison. So he borrowed Winnie's.

He then uttered the first words most South Africans had ever heard him speak:

"Comrades and fellow South Africans, I greet you all in the name of peace, democracy and freedom," said Mandela. "I stand here before you not as a prophet, but as a humble servant of you the people. ...

"Today, the majority of South Africans, black and white, recognize that apartheid has no future. It has to be ended by our decisive mass action," he said in a speech frequently drowned out by roars from the crowd. "We have waited too long for our freedom."

For a man cut off from the world for so long, Mandela looked at home in the spotlight, connecting with the black crowd that worshipped him, while taking the first steps to win over skeptical whites. However, Mandela later acknowledged that he felt anything but comfortable as he was thrust onto the world stage.

"Frankly, when I saw that crowd, I must confess that I didn't have the courage, the confidence to speak to them. It rather took me by surprise," he wrote in his autobiography.

After speaking for 30 minutes, Mandela was whisked away. He wanted to spend his first night of freedom among black South Africans, yet for security reasons, he was taken to Tutu's home. However, the archbishop's official residence happened to be in a leafy, posh Cape Town suburb that was officially a whites-only neighborhood. Tutu was allowed to live there only because of his position.

Across the country, celebrations and violent clashes lasted until dawn. Black South Africans danced and drank the night away in the black townships. White police fired on black looters. Rival black factions battled each other.

Difficult days lay ahead. Political violence would claim more than 10,000 lives over the next four years, almost all of them blacks. Negotiations between de Klerk's government and Mandela's ANC stalled and broke down on multiple occasions before the country's first all-race election that elevated Mandela to the presidency in 1994.

But on that summer's day in 1990, South Africa entered a new era, and Nelson Mandela was the man who led the way.