Accessibility links
Iranian Women: New President Could Bring More Restrictions : Parallels Women's rights advocates say they are nervous Iran's next president might continue or even add to the hard-line policies of Mahmoud Ahmadinejad. Several of them shared their thoughts as Iranians prepare to vote Friday. 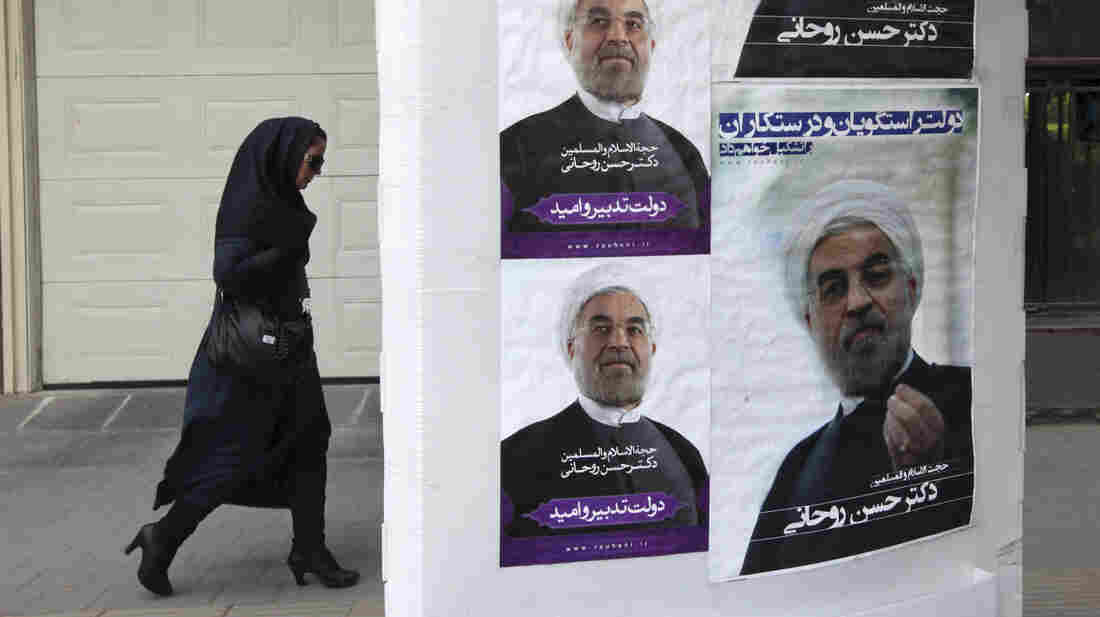 An Iranian woman walks past posters of presidential candidate Hasan Rowhani, a former top nuclear negotiator, next to his campaign headquarters, in Tehran, Iran, on June 1. Many Iranian women are concerned about the erosion of their opportunities. Vahid Salemi/AP hide caption 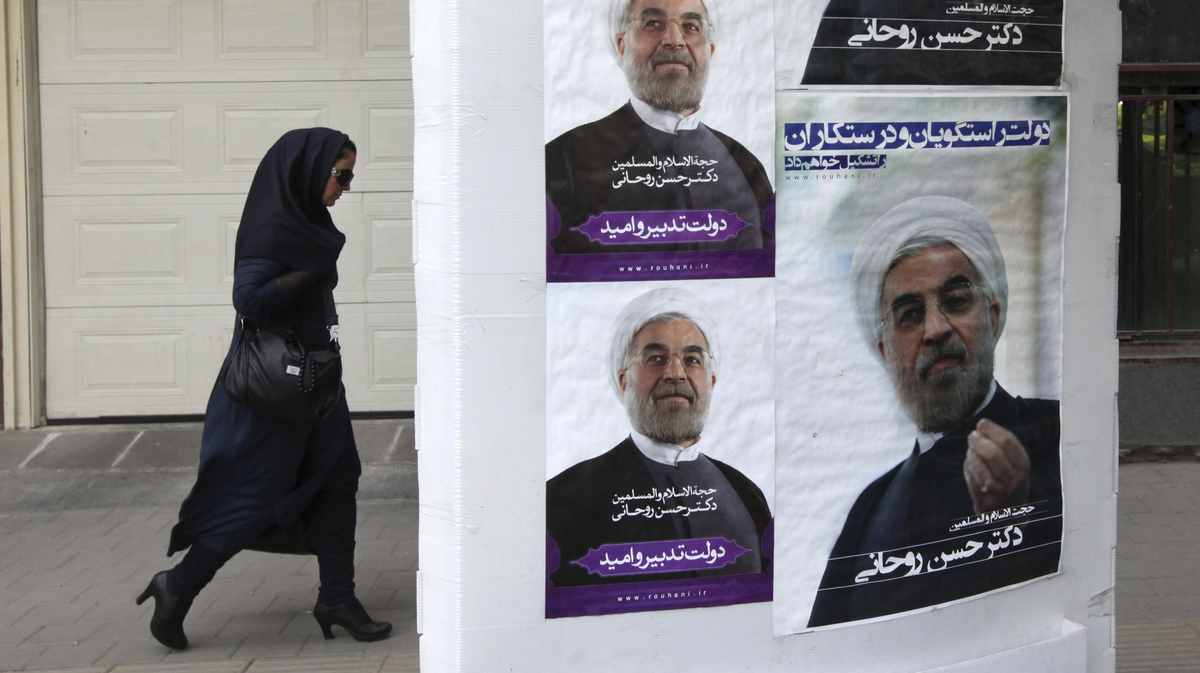 An Iranian woman walks past posters of presidential candidate Hasan Rowhani, a former top nuclear negotiator, next to his campaign headquarters, in Tehran, Iran, on June 1. Many Iranian women are concerned about the erosion of their opportunities.

As Iran prepares to hold a presidential election Friday, many women say that their limited gains have been rolled back by the outgoing president, Mahmoud Ahmadinejad.

Since all of the presidential candidates have been officially approved by Iran's clerical leaders, women say most are conservative and would be likely to continue adopting policies that target the social and educational advances by women.

NPR has contacted a range of Iranian women via email and social media. Some are living outside the country, while others remain inside. We also encourage you to write us with your thoughts and questions about the elections and their implications for women in Iran.

Sussan Tahmasebi was a leading women's rights activist. She was arrested in 2007 for her activism and left Iran in 2010. She is currently living in Washington.

What we've seen in the last eight years has been a serious pushback against women despite the fact that women inside Iran have very limited rights, based on an extremely conservative interpretation of Shariah [Islamic law].

Women have made huge social gains. For example, 62 percent of university students are women. ... They are getting married at age 25, on average [the legal age is 13]. ... and we've seen an overturning of all these policies and all these social gains.

We've seen quotas being introduced to limit women's participation in higher education. We've seen the family-planning program of Iran, lauded by everyone around the world as one of the most successful, come to an end during Ahmadinejad's tenure.

We've seen this promotion of early marriage and a lot of other regressive policies targeting women's gains and we see a similar discourse from [Saeed] Jalili [the conservative presidential front-runner].

Despite Limited Election Choices, Iranians Eager To Be Heard

The cornerstone of his social policy is to really push women back into the home and stress their roles as mothers. ... That does not reflect the realities of Iran — not only what women have gained — but it doesn't reflect the economic realities of the country where most households really need to have two incomes.

V is a sociologist living in Iran. Her comments come from Tehran via Facebook. She did not want her name used.

I will vote, and I'm trying to convince other friends also to vote. The reason is after what we heard in the presidential debates and discussions ... we could see how the ancient and the recent politicians were dealing with each other.

Saeed Jalili ... appeared to be dangerous and reformist Hasan Rowhani closer to what people expected. I think many women ... if they vote, will vote for ... Rowhani. ... Jalili encouraged women to stay at home and be a mother, a teacher or in the mosque.

Yesterday I was talking with some young girls in the bus. They said that they will vote for Rowhani because they don't want this gender segregation in the university.

In fact, many young girls vote for this reason, but interestingly not so much middle-age women, who don't experience this segregation.

Azadeh Moaveni, author of Lipstick Jihad and Honeymoon in Tehran, lives in London where she works with Iranwire, an online news service.

The economy matters desperately today, and I think the final television debate made clear there are significant differences between the candidates. But people seem uncertain as to whether to trust those differences and the very process itself. The scars of 2009 are deep, but with the economy in free fall, people may still be inclined to use their vote as a last resort.

I am terribly concerned, actually, about women's access to higher education. The gender segregation initiatives being implemented by the Ahmadinejad government are reshaping university-level education.

In practice, it's a program of deprivation more than segregation, with women being banned from some 77 subjects, mostly in hard sciences and technical fields like IT, and men also being denied access to humanities and arts subjects.

O is a journalist and photographer who has worked for a magazine. The editor of that magazine is now in prison, and O cannot find a job.

I just returned from a square near my home. Although I was wearing a mantoo [overcoat] and a scarf, I had to change the direction I was traveling twice to get back home in order to avoid the ... modesty patrol.

Most likely, they would take me in for questioning. This means, I would have to give them some kind of guarantee letter, and my family would have to come and get me out. This would be a great headache. This kind of daily anxiety has followed us women and girls for years — every time we leave our homes.

I have a bachelor's degree from a major university and I have work experience. But unfortunately I have been unemployed for a long time. This is the fate of many of my friends and acquaintances. I am just your average middle-class person, and until recently my concerns were primarily around the cultural and social restrictions. But I have been struggling economically as well. I am talking about basic everyday needs like buying meat, oil and rice.

I am so tired of all this discrimination and hostility from the government. People are constantly being categorized — women vs. men, Muslim vs. non-Muslim, Shiite vs. Sunni, with hijab and without hijab [the female headscarf]. Many of my friends who have spoken up against these issues are languishing in jail. Many have fled the country. Some are trying to flee now.