Accessibility links
In Gaza, Hamas Targets Palestinian Informants In Crackdown : Parallels Palestinians convicted of working for Israel's security forces face harsh punishment, which can include vigilante justice. Hamas, the Islamic group that runs the Gaza Strip, has been waging a campaign to crack down on Palestinian collaborators, or informants. 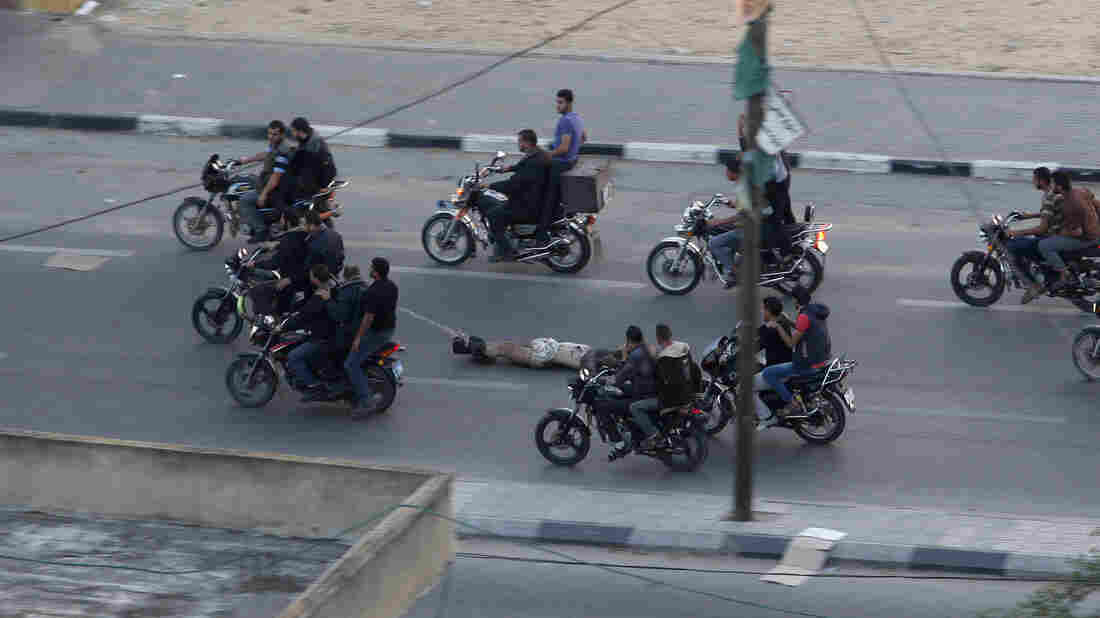 Palestinian gunmen drag a man from a motorcycle in Gaza City on Nov. 20. He was one of six men killed that day on suspicion of collaborating with Israel. The Hamas government in the Gaza Strip denied responsibility, though it has executed others judged to be working with Israel's security forces. Hatem Moussa/AP hide caption 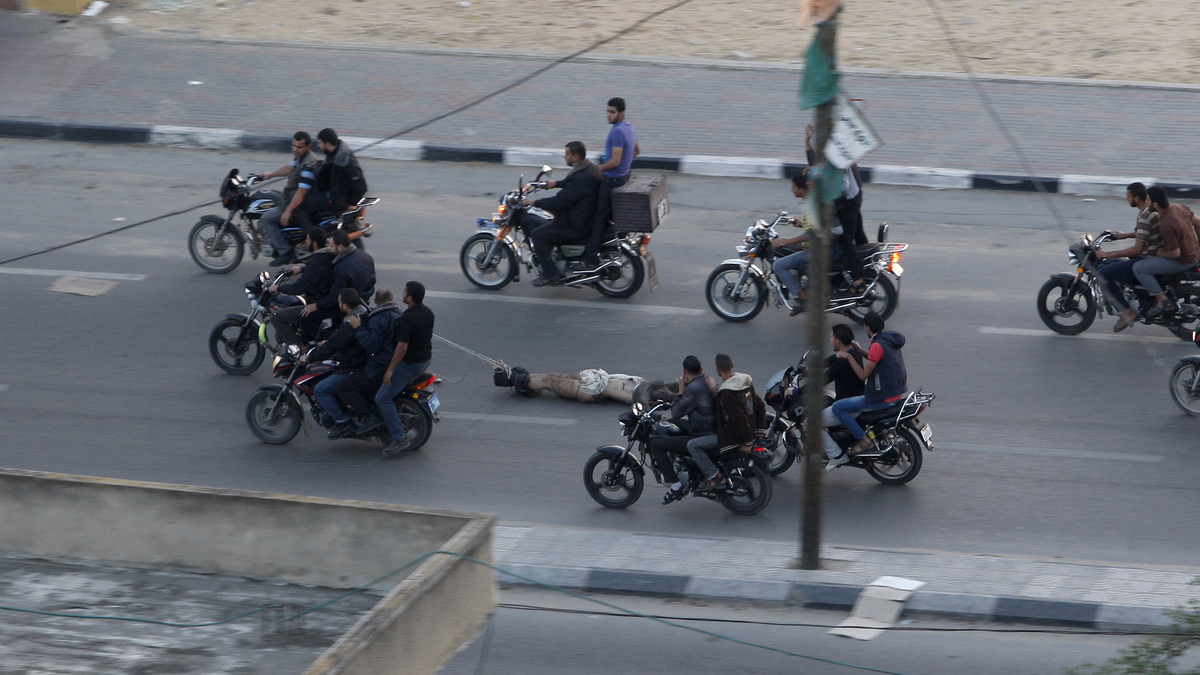 Palestinian gunmen drag a man from a motorcycle in Gaza City on Nov. 20. He was one of six men killed that day on suspicion of collaborating with Israel. The Hamas government in the Gaza Strip denied responsibility, though it has executed others judged to be working with Israel's security forces.

Life was already grim in the Gaza Strip when fighting raged between Israel and Hamas last November. Then Khulud Badawi got unexpected bad news about her husband.

Badawi's husband, Ribhi Badawi, was in prison in Gaza City. He was supposed to go to court that day for a final appeal of charges that he had collaborated with Israel against Hamas, which runs the Gaza Strip.

But Ribhi Badawi was taken from prison and executed in public, along with five other inmates. They were all accused of being collaborators, or informants, working for Israel.

"In this case, what was remarkable was that these men were not executed in anything resembling legislative authority or the penal authority of the Hamas government, but by armed men," says Sarah Leah Whitson, who directs the Middle East division of Human Rights Watch.

Hamas, which has been in control of Gaza since 2007, has executed people judged to be collaborators. But in the six deaths last Nov. 20, the Hamas-run government said it was not responsible.

"What happened was against the law," Islam Shawan, a spokesman for Gaza's Interior Ministry, says. "We had a high-level committee investigate, and it handed down tough punishments to security officials who failed to do their jobs."

Shawan won't name names, give ranks or offer any other information, but he claims that four people working in the prison system were punished. One was fired, one was transferred, one was jailed and one lost any chance at promotions.

He has no progress to report on tracking down the people who actually did the killings, but he does claim progress in cracking down on collaboration.

Three months after those accused collaborators were killed, Hamas started an anti-collaboration campaign in Gaza.

TV ads played scary music with pictures of a young man being dragged to the gallows by Hamas security forces. The video storyline shows he was coerced into collaboration by doing things that could set him up for blackmail — drinking, taking drugs, searching for sex online.

Shawan says this campaign was aimed at everyone in Gaza.

"This was a national campaign — not just directed at collaborators," he says. "It was designed to educate and protect society by showing people how Israelis recruit."

People were offered a chance to turn themselves in. Shawan won't say how many did, but claimed one example: an engineering student who allegedly gave Israel information about his neighbors, his professors and student politicians. The young man wasn't punished, Shawan says, but quietly re-educated.

There was no "re-education" offered by Hamas in the case of Khulud Badawi's husband, who was a member of a rival militant group.

"I don't believe in this campaign," she says. "My husband used to tell me that people who were collaborators would confess immediately, but people who weren't would be tortured for months and never confess because they were innocent."

Just last week, two accused spies were given death sentences, suggesting that tough punishment is just as important in Hamas' efforts to crack down on collaboration as education and amnesty.