Accessibility links
Mass Kidnapping Puts Mexican Legal System On Trial : Parallels Mexico City has largely been spared the drug violence in other parts of the country. But a brazen daylight abduction of 12 young people from a Mexico City bar is putting the spotlight on one of the capital's roughest neighborhoods, and putting the popular mayor on the defensive. 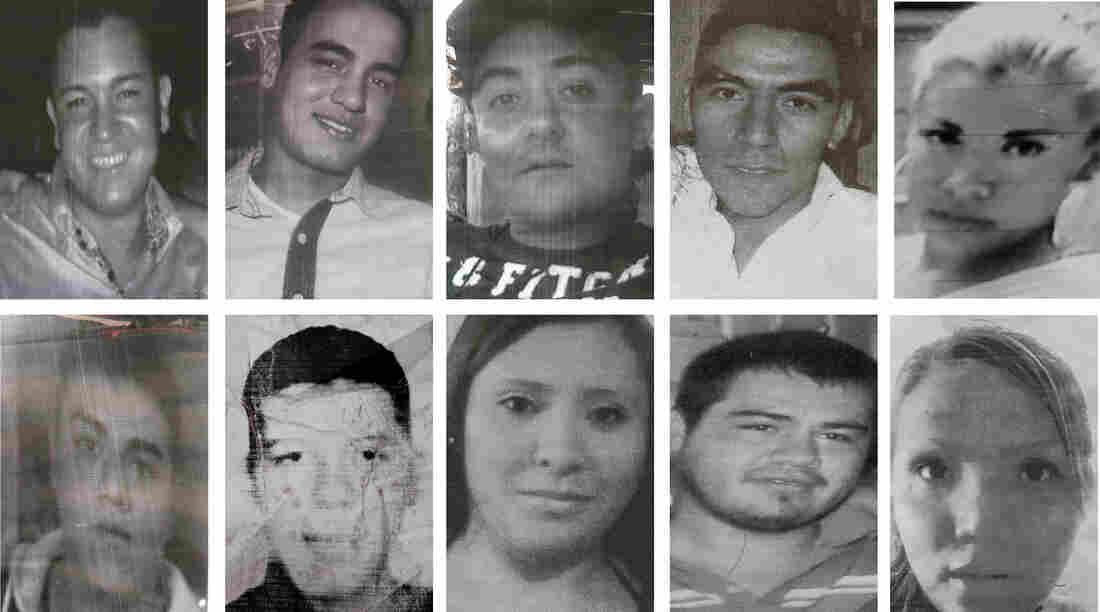 Images from posters made by relatives show 10 of the 12 young people kidnapped in broad daylight from a bar in Mexico City on May 26. No one has claimed responsibility for the brazen abduction. Marco Ugarte/AP hide caption 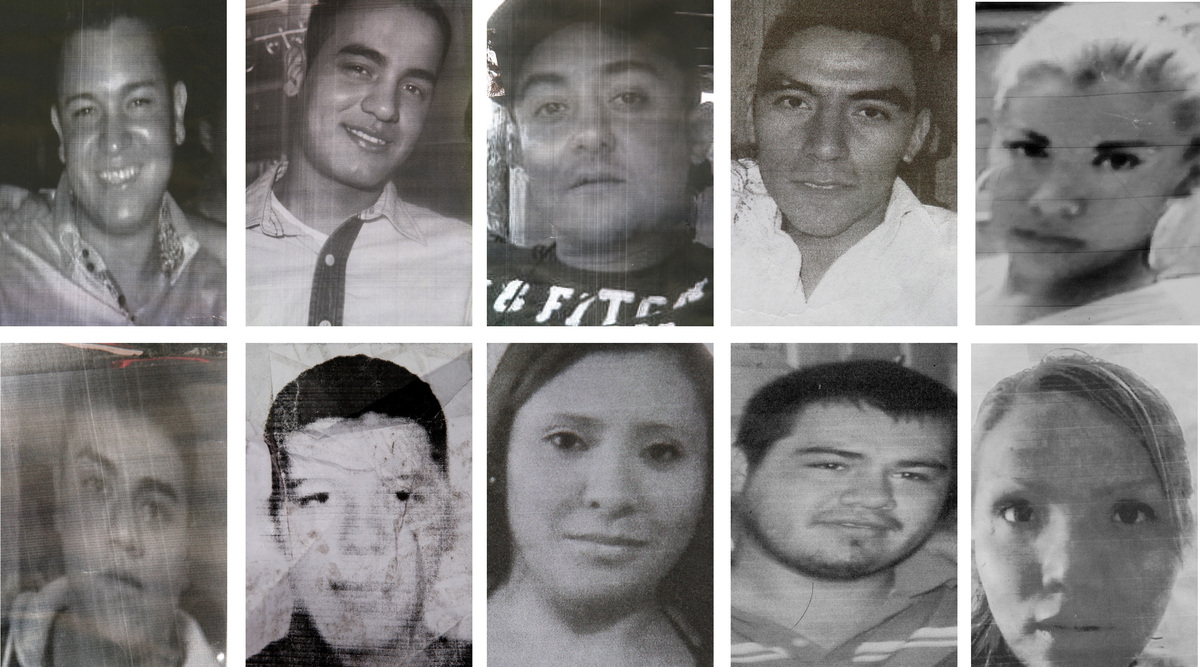 Images from posters made by relatives show 10 of the 12 young people kidnapped in broad daylight from a bar in Mexico City on May 26. No one has claimed responsibility for the brazen abduction.

Josephina Garcia Rodriguez and Leticia Ponce Ramos sip coffee and console each other at a restaurant in front of Mexico City's prosecutor's office. They're about to head into a meeting with the lead investigator in the case of their kidnapped sons.

"We're going on three weeks since they were kidnapped," Garcia says. "It's been some difficult days, really hard for us mothers. We just want our sons back home with us."

Garcia's 19-year-old son, Said, was taken from the Heaven bar at about 11 a.m. on May 26. Twelve young adults in all were snatched, just blocks from Mexico City's skyscraper-filled main boulevard near the U.S. and British embassies. Ponce's 16-year-old-son, Jersey, was also among those kidnapped.

She says since then she just feels like the walking dead, as if someone has taken a piece of her. It's not fair, she says, as the tears stream down her face. 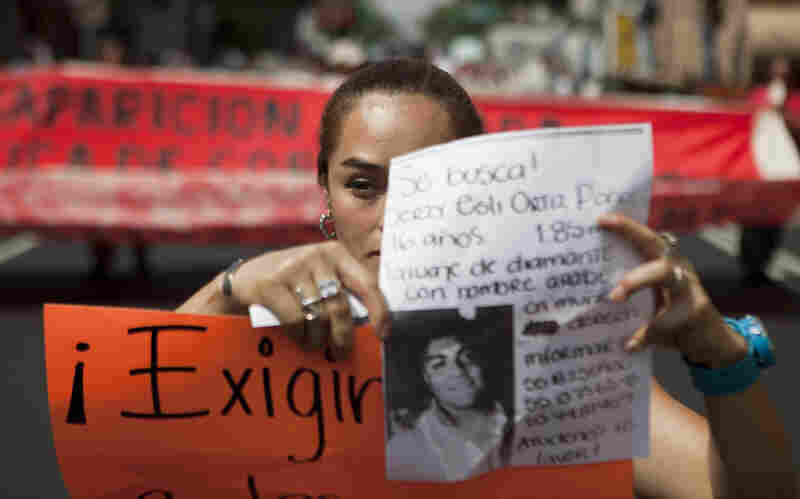 A woman holds up a sign with details of her recently disappeared relative during a protest in Mexico City, on May 30. Eduardo Verdugo/AP hide caption 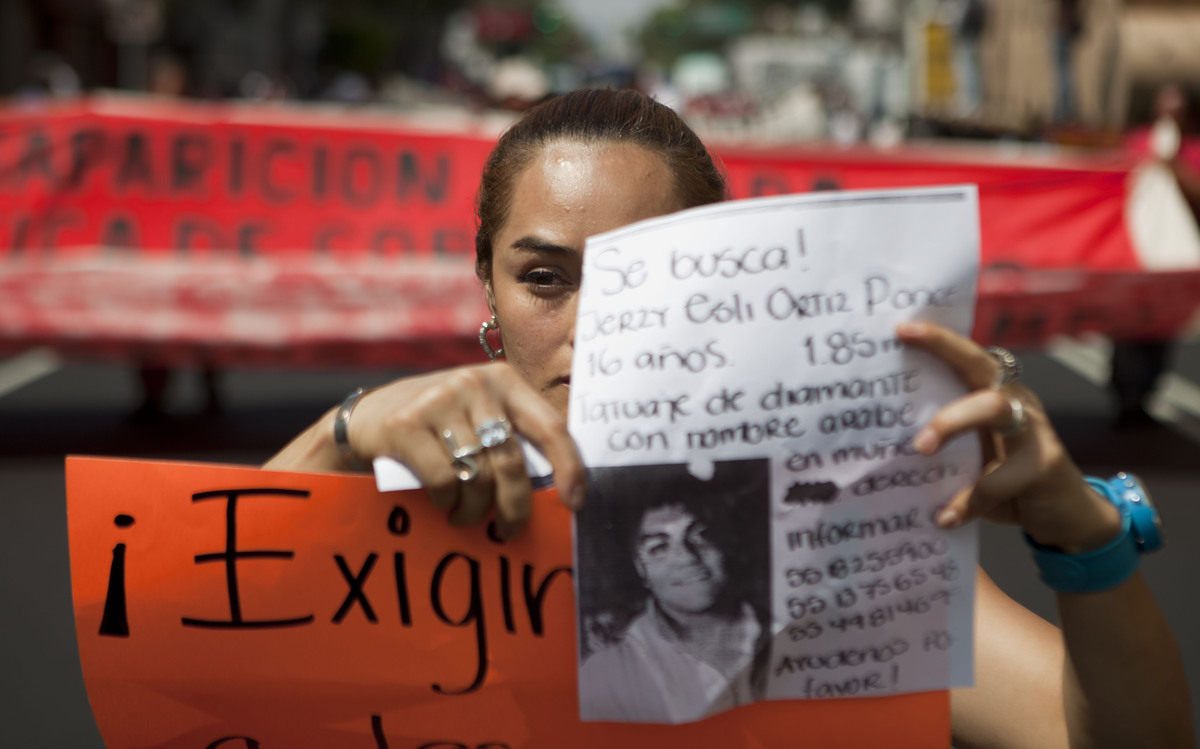 A woman holds up a sign with details of her recently disappeared relative during a protest in Mexico City, on May 30.

Despite the violence that rages in many parts of Mexico, the capital had been unusually calm, with relatively low crime rates. The kidnapping case has put a spotlight on one of the roughest neighborhoods in the capital, Tepito — notorious for selling bootleg merchandise and drugs — and put the city's popular mayor on the defensive.

A Plea For More Police

Kidnappings, which plague a number of countries in Latin America, have skyrocketed in Mexico over the past decade.

The missing are all from Tepito, an outdoor shopping area where vendors sell everything from a 9 mm pistol to a bootleg copy of the latest Iron Man movie.

On Monday, Mancera told reporters that he has given everyone in his Cabinet clear instructions: He wants results, and if he doesn't get them, they'll be out of a job.

The next day, his top official for social development was in Tepito highlighting the work she has done in the rough neighborhood. Rose Isela Rodriguez ordered city workers to paint crumbling sidewalks, pick up trash and clear clogged sewer drains.

Longtime resident Juana Consuelo Moreno says that the strong arm of the law is needed in the neighborhood — a firm police crackdown to bring order and civility to Tepito.

Authorities say a rivalry between local gangs may have led to the kidnapping. Two of the people taken from the bar are sons of jailed crime bosses.

Mancera, the mayor, says all the bad press about the case is hurting Mexico City's image and chastised reporters for talking poorly about the city.

Juan Francisco Torres Landa heads a group called Mexico United Against Crime. "This is now a national scandal," he says.

Residents aren't worried about their image, Torres says; they want justice. As a result, all of Mexico's judicial system is on trial.

"If they fail, I can assure you the effects will be felt by police departments and district attorneys all over the place," he says.

Four people are under investigation in the case, including one of the club's owners. The Heaven bar remains closed. And no one has claimed responsibility for the mass kidnapping.