Accessibility links
Fashion's Victims: An Artist's Focus On Garment Workers : Parallels More than 1,000 people were killed in the factory collapse in Bangladesh in April. Spanish companies were among those whose clothes were made at the facility. But there's a clash between the allure of low-cost fast fashion and consumer awareness of working conditions. A Spanish artist is doing her bit: She's drawing attention to workers' plight. 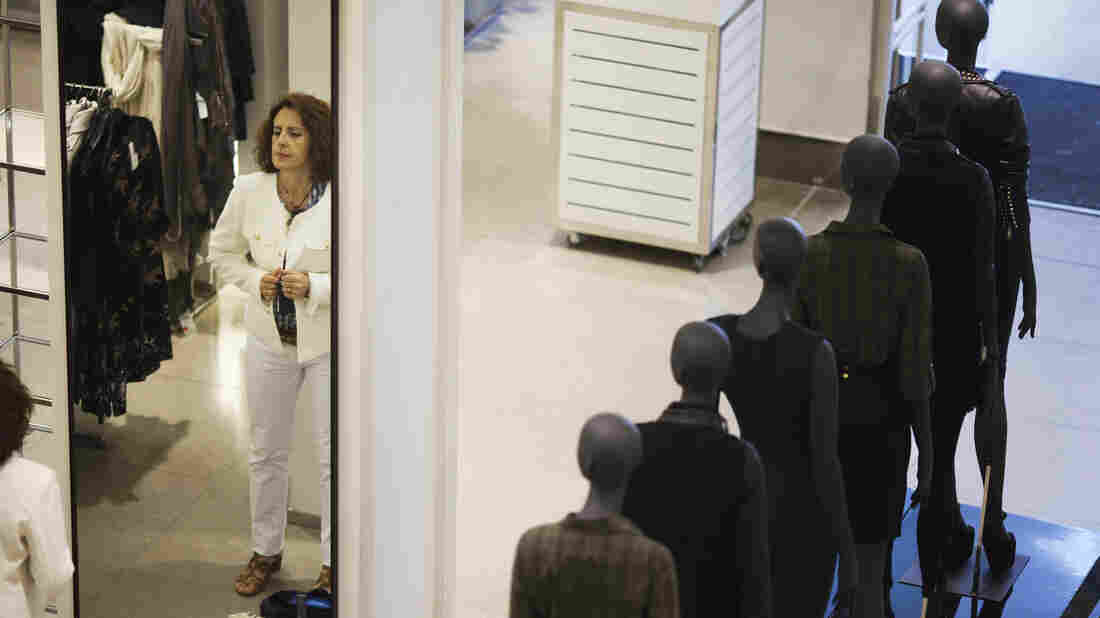 A woman tries on a jacket at a Zara store in Madrid. Zara's parent company, Inditex, was among Spanish companies to sign fire and building safety agreements for their factories in Bangladesh following a deadly factory collapse in April, though Inditex was not directly involved in that incident. Susana Vera/Reuters/Landov hide caption 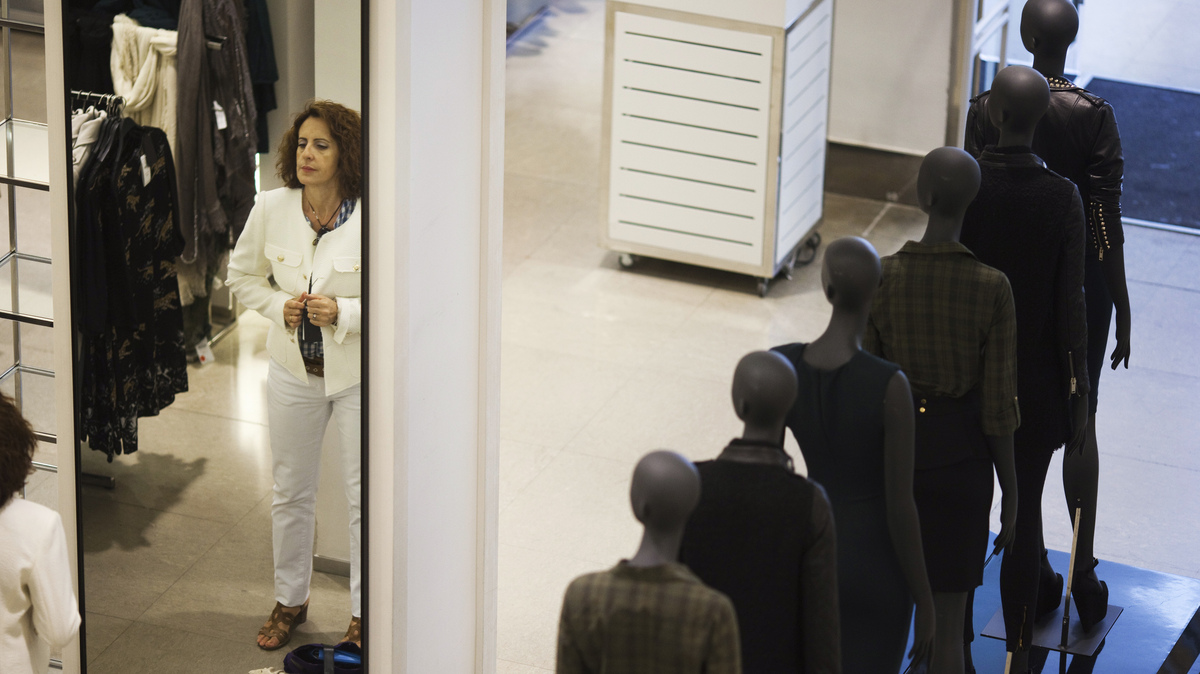 A woman tries on a jacket at a Zara store in Madrid. Zara's parent company, Inditex, was among Spanish companies to sign fire and building safety agreements for their factories in Bangladesh following a deadly factory collapse in April, though Inditex was not directly involved in that incident.

On Madrid's posh Gran Vía, thousands of shoppers and tourists visit the flagship stores of some of the biggest names in European fast fashion — Zara, Mango and H&M.

Suddenly, the hordes of bargain-hunters stop dead in their tracks.

Face down on the sidewalk lie the bodies of three women, buried in rubble. Silver stilettos protrude from underneath cement dust and cardboard. Designer handbags and sunglasses rest next to their lifeless hands.

Tourists gasp. A crowd forms. An off-duty nurse rushes to crouch over one of the bodies. Others call 911 or take photos. And one woman hangs back, observing from afar.

She's the Spanish artist Yolanda Dominguez, and the women sprawled on the sidewalk are alive and well. They're models — part of Dominguez' latest art installation, Fashion Victims, meant to conjure images of the Rana Plaza garment factory collapse in Bangladesh.

"The real fashion victims are not celebrities, but anonymous workers in poor conditions, in polluted countries," Dominguez, 36, told NPR afterward. "The images I saw [from Bangladesh] in the media of the limbs of the dead people under the rubble struck me so much, and I wanted to reproduce them."

At least 1,129 people died when the Rana Plaza factory collapsed outside the Bangladeshi capital, Dhaka, on April 24. The accident is believed to be the deadliest in the garment industry's history, and reverberations are being felt as far away as Spain — home to some of the world's biggest low-cost fashion retailers.

Clothing and purchase orders from Spanish retailers Mango and El Corte Inglés were found in the rubble of Rana Plaza, and a Spaniard was registered as the factory's director-general. The man, identified by Bangladeshi police as David Mayor, is under investigation and believed to be hiding in Spain.

Rana Plaza was not the first deadly incident. In January, a fire killed at least seven workers at another Bangladeshi factory making clothes for Zara's parent company, Inditex.

In May, Spanish companies and others like the Swedish-owned H&M — the largest buyer of clothes made in Bangladesh — finally signed unprecedented fire and building safety agreements for their factories there.

But the sheer magnitude of the Rana Plaza disaster means worker safety in Bangladesh is no longer only a matter for lawyers, unions and bereaved families. It's now on the radar of shoppers on European thoroughfares like Gran Vía.

"I want to see proof that companies are following the rules and doing right by their workers in third world countries," said shopper Patricia Barrera, 28, as she locked up her motor scooter in front of H&M in Madrid. "I'd even be willing to pay more — though I think the companies could afford it themselves."

Inditex announced record profits of $583 million for the first quarter of this year — much of that from expansion into developing countries. While the company has been heralded as a rare success story in Spain's economic malaise, the Rana Plaza disaster has some consumers questioning the Spanish fast-fashion model of doing business.

"Technically, when we talk about the fast-fashion model, one of the characteristics is local sourcing — not because of cost, but because they are trying to compete in speed," said Philip Moscoso, a fashion industry expert at Spain's IESE Business School.

Inditex, for example, prides itself on speed: 15 days from design to retail rack. That has meant at least half of production is done locally, in Spain and Portugal.

But Inditex is expanding at a rate of more than a store a day, and Mango is close behind, opening about four new stores a week — and increasingly turning to foreign production. Total employment in Spain's garment industry has fallen from 243,000 in 2004 to 136,000 last year.

Nevertheless, retailers had been resistant to signing binding safety initiatives for their foreign factories, fearing they might be held responsible for sub-sub-contractors whose practices could be beyond their control, said Moscoso.

"You may be working with a company which then — and this happens in Bangladesh but also in China and other countries — itself contracts to even other people," he said. "So sometimes it's rather difficult to keep track of who is ultimately really the producer." 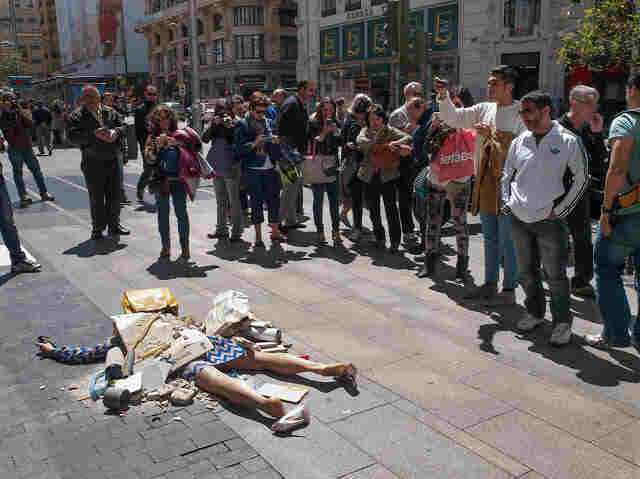 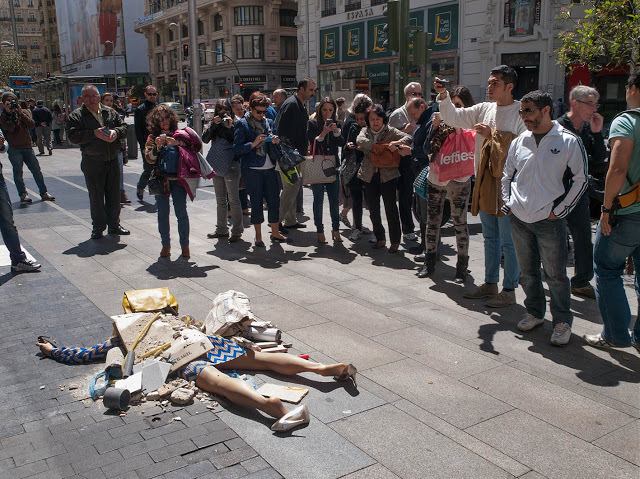 But with the Rana Plaza "wake-up call," Moscoso envisions the start of a fair trade movement in mainstream consumer fashion, similar to what already exists in the food and beauty industries.

"What may happen is that you develop some kind of sub-brand or label, [so] that those people that are interested and willing to support those efforts by companies have an easy identification of which products held up to certain standards or not," he said.

That system could take years to set up. Until then, Dominguez, the Spanish artist, is determined to prevent those images of Rana Plaza from vanishing from the public conscience. She's produced a video of her Fashion Victims art installation, and she hopes to re-create the public spectacle in shopping centers worldwide.

The three models Dominguez contracted for the project on Madrid's Gran Vía all waived their fee.

"It produced a shock in people's daily lives — but a necessary one," said María Sanchez, who wore silver shoes and was sprawled directly in front of the Mango store for about an hour. "It was a new experience for me. When we finished, I felt good about it."

In an earlier audio version of this story, we mistakenly said the Bangladesh garment factory building collapse happened in March. It happened in April.