Accessibility links
In Venice, Huge Cruise Ships Bring Tourists And Complaints : Parallels The Italian city welcomes tourists, but there's been a backlash to the 650 cruise ships that sail down the canals and tower over the city. The city government and the Venice Port Authority have agreed to search for solutions. 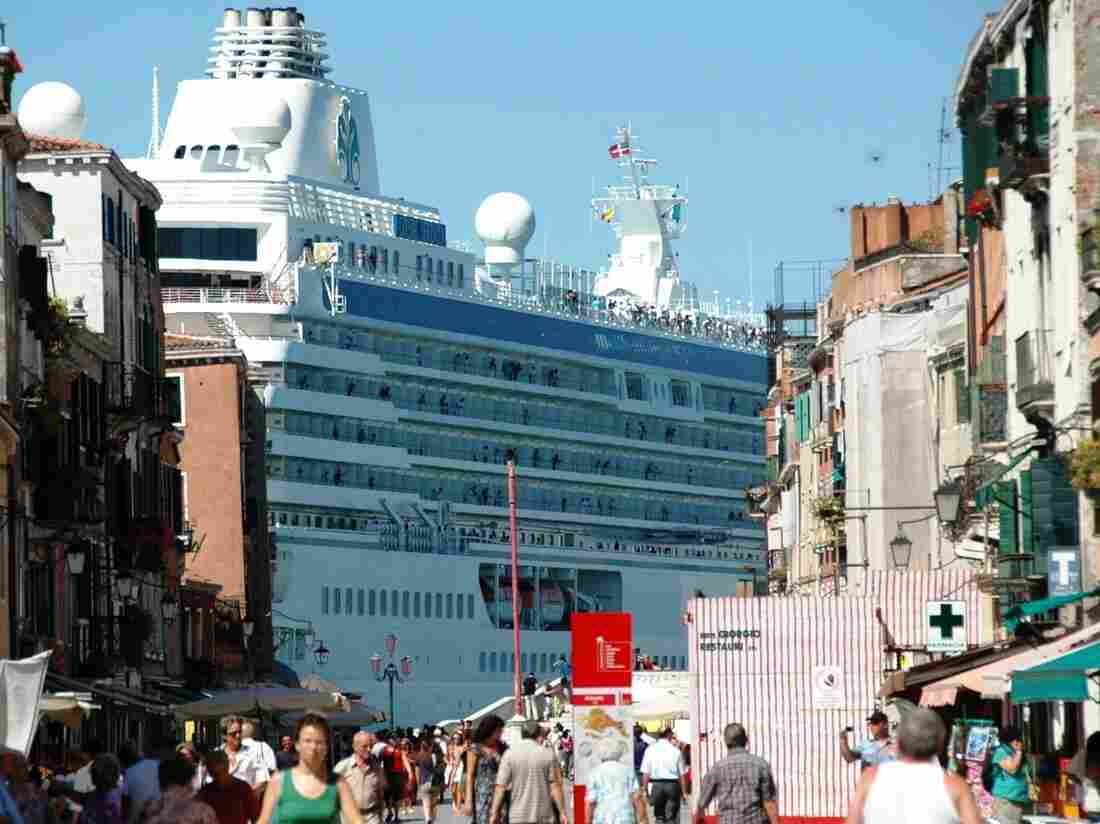 toggle caption
Courtesty of the No Big Ships Committee 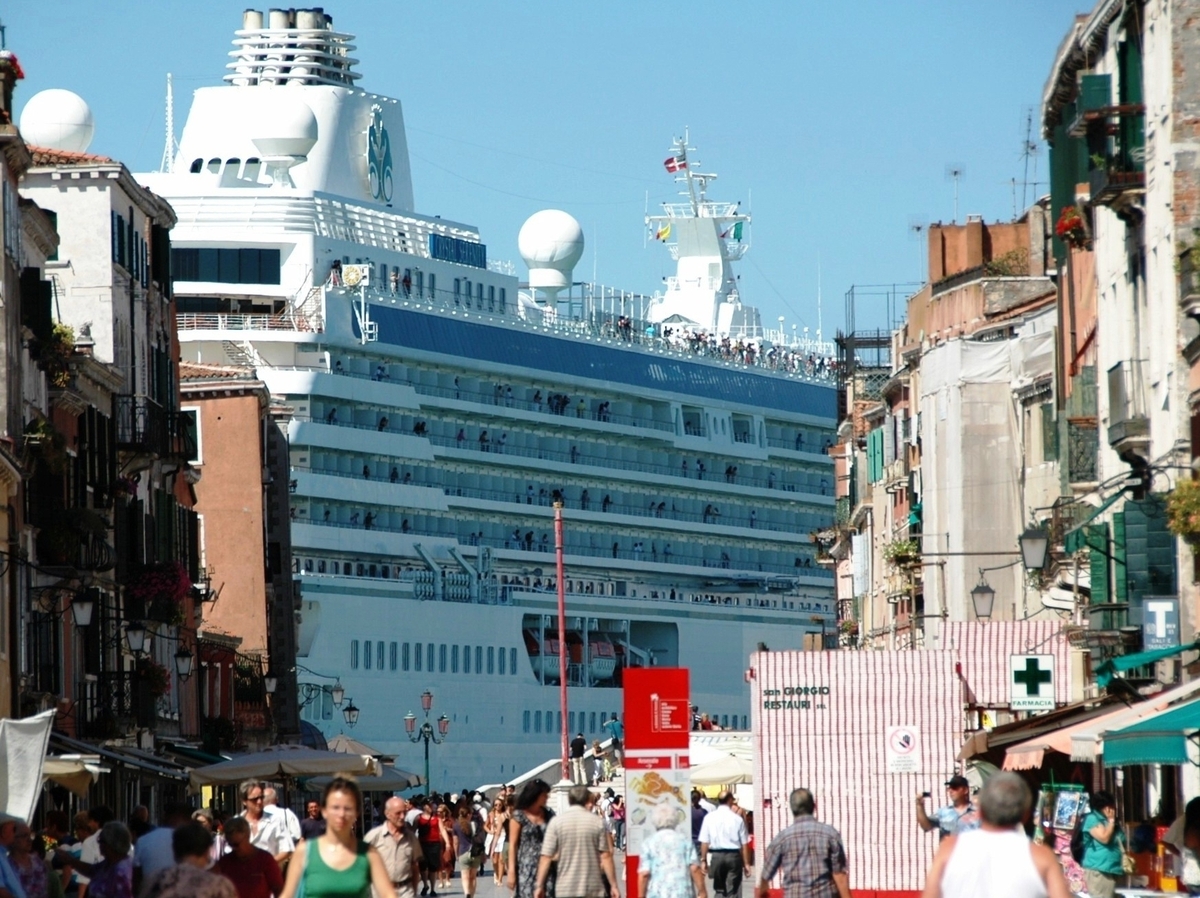 Courtesty of the No Big Ships Committee

The fragile architectural treasures of Venice are endangered by rising sea levels, and a growing number of critics now say the city and its canals are at risk from massive cruise ships as big as floating skyscrapers.

On an average day, tens of thousands of passengers lean over the railings of cruise ships that can be 300 yards long and 15 stories high. The tourists peer down at the majestic Doge's Palace as they sail into St. Mark's basin and down the Giudecca canal.

Matteo Casini, a professor of history, says the big ships are alien creatures and an insult to the Renaissance jewel.

"It's like being in a science-fiction movie," he says. "These monsters obscure us; they are twice the Palazzo Ducale [Doge's Palace]; they are twice longer than Piazza San Marco; they have dimensions and numbers nothing to do with Venice."

Casini complains that when big ships pass by, windowpanes tremble and vibrations lead to cracks in the walls of old buildings. He says that the towering ships interfere with television and Wi-Fi signals.

Last month, exasperated Venetians organized a three-day protest under the slogan, "Take Back The Lagoon." The high point was a symbolic boat blockade in which hundreds of people in small vessels filled the canal waving banners with the words, "No Big Ships."

"Big ships are destroying Venice," a woman lamented over a loudspeaker. A man followed her, proclaiming, "Each big ship spewing black smoke pollutes the equivalent of 14,000 cars, moves 135,000 tons of water and destroys the foundations of Venetian buildings." 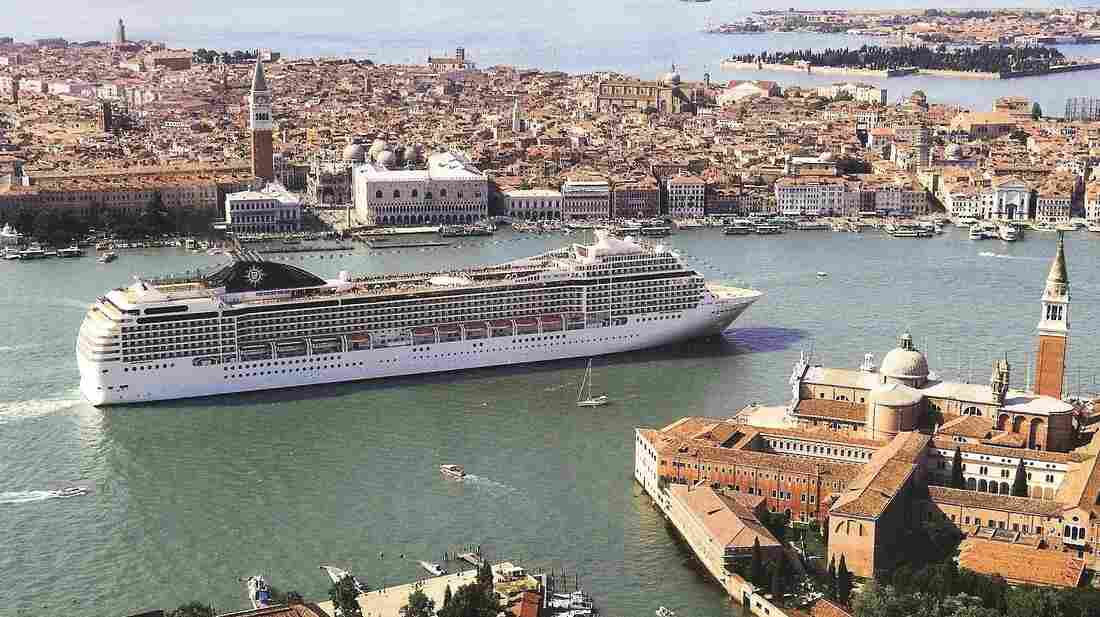 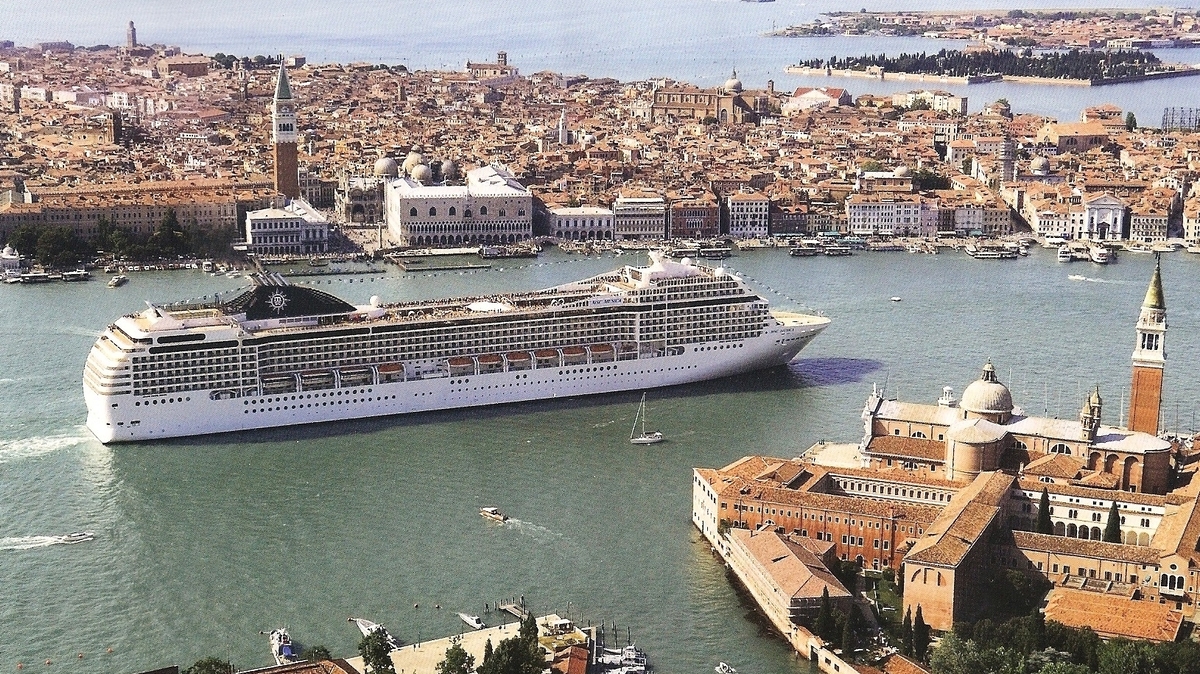 A cruise ship in Venice sails by St. Mark's Square and Doge's Palace.

Courtesy of No Big Ships Committee

A Rapid Rise In Cruise Ships

Six ships docking at the lagoon terminal can disgorge in one day more than half the city's population of 55,000.

"Tourism cannot alter the nature of the city and the lagoon, cannot transform it into a Disneyland," Casini says. "Venice is not a Disneyland."

But tourism is the bedrock of Venice's economy and not everyone here wants the ships kicked out of the lagoon.

"When there are boats in, you can feel the difference — boats make that difference, that 15-20 percent difference. You feel it, there is no doubt about it," says Paul Pattison, who is half-British, half-Venetian. He acknowledges that his family's blown-glass factory is profiting from the cruise ships.

He dismisses the negative psychological impact of seeing the big boats tower over the city.

"I find it fantastic," he says gleefully. "It's almost like reliving a Fellini film every single day, and that's great."

It's hard to get reliable data on just how much the cruise industry brings into city coffers. Many critics claim that by living onboard, ship passengers just buy some souvenirs and so hotels and restaurants do not profit from their presence.

For Reporter, Cruise Ship Disaster Is A Local Story

One organization that has reaped benefits is the Venice Port Authority, which manages the docks.

Its head, Paolo Costa, says the cruise industry has created 6,000 jobs. He says saving Venice does not mean just saving its monuments.

"We have to protect even the life in Venice," says Costa. "It's not just some trivial jobs; it is the essence of Venice. Venice without a port does not exist. Venice was a historic maritime republic."

Costa wants to widen an existing canal in the lagoon to prevent ships from passing too close to historical buildings.

But Anna Somers Cocks, former chairman of the Venice in Peril Fund, says that would cause serious damage to the lagoon's delicate ecosystem.

"Because it contributes to the creation of a very strong current where there is a low tide which sucks out sediment from bottom of the lagoon," says Somers Cocks. "And the lagoon used to be quite shallow and very still and it is now getting very deep because it is losing sediment the whole time out into the Adriatic Sea."

Opposition to the big ships grew after the Costa Concordia cruise ship ran aground off a Tuscan island 18 months ago, killing 32 people.

That prompted a government ban on big ships' sailing too close to the coast. But the decree was suspended for Venice until an alternative could be found.

In response to the growing outcry against big ships, the Italian government, the municipality and the Venice Port Authority have finally agreed to search for alternative solutions. They're scheduled to meet in Rome on July 25.