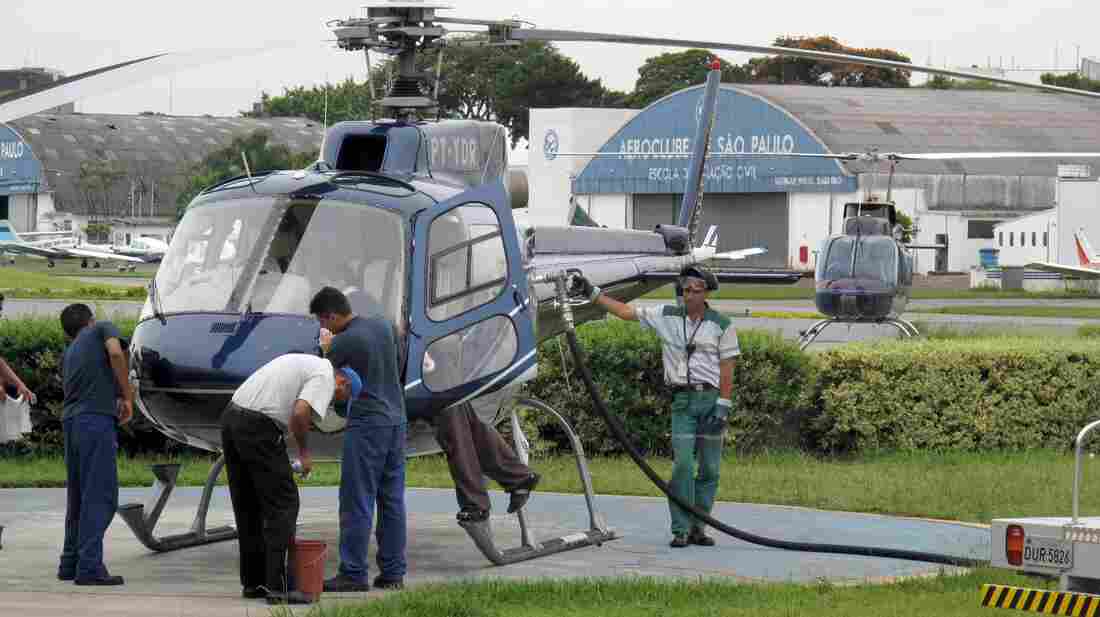 A helicopter is refueled at an airfield in Sao Paulo in 2009. The wealthy rely on helicopters in Brazil to avoid the gridlocked traffic. Politicians who frequently use helicopters, even for short commutes, are now coming under criticism. Helmut Reuter/Landov hide caption 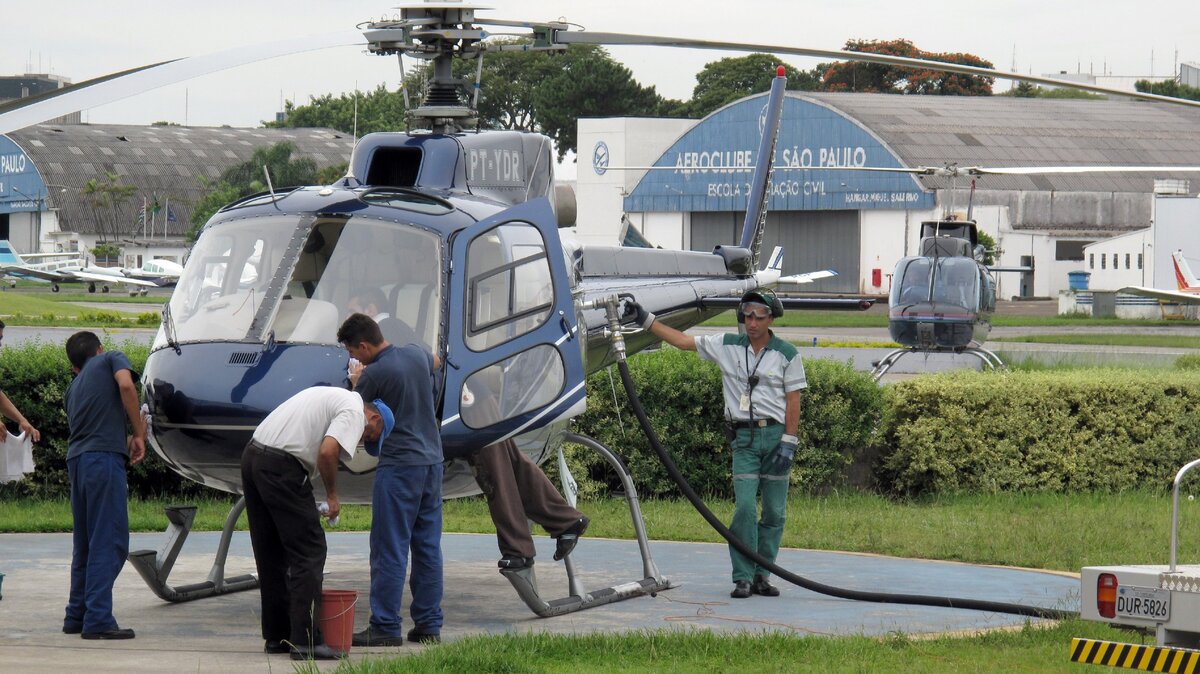 A helicopter is refueled at an airfield in Sao Paulo in 2009. The wealthy rely on helicopters in Brazil to avoid the gridlocked traffic. Politicians who frequently use helicopters, even for short commutes, are now coming under criticism.

Unlike New York Mayor Michael Bloomberg, who often takes the subway to work, some prominent politicians in Brazil have a far more impressive way of getting around: private helicopters and government planes.

Perhaps the most over-the-top example of the trend is that of Rio de Janeiro state Gov. Sergio Cabral. A recent magazine expose showed that his commute to work is only about 6 miles.

Yet every morning he gets up, takes a chauffeured car to his helipad about halfway to work, and then takes the rest of the trip — about three minutes — by chopper. The cost to the taxpayer of that daily flight, according to the magazine, is $1.7 million a year.

Cabral also used his helicopter to ferry his nanny, his dog and his family on shopping trips and vacations to his country home. When confronted by reporters with the findings, he was unapologetic.

"I'm not the first to do it; others in Brazil do it, too," he said. "And it's OK because of the job I have. I'm not doing anything new. I am transported with my family, I get out of work and go to my country home." 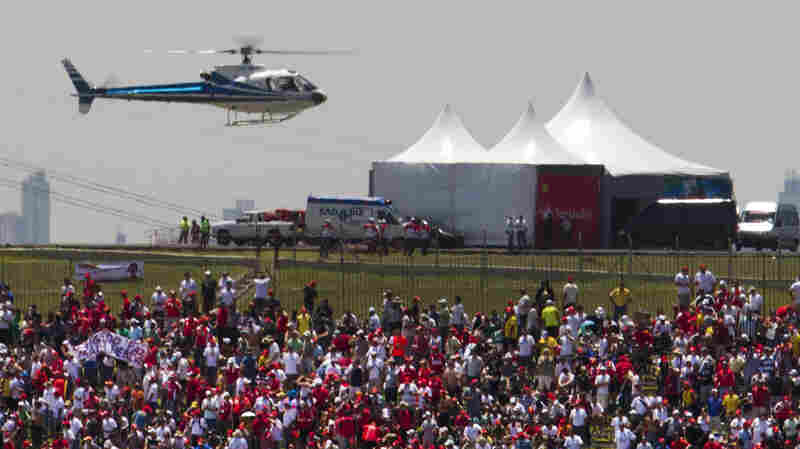 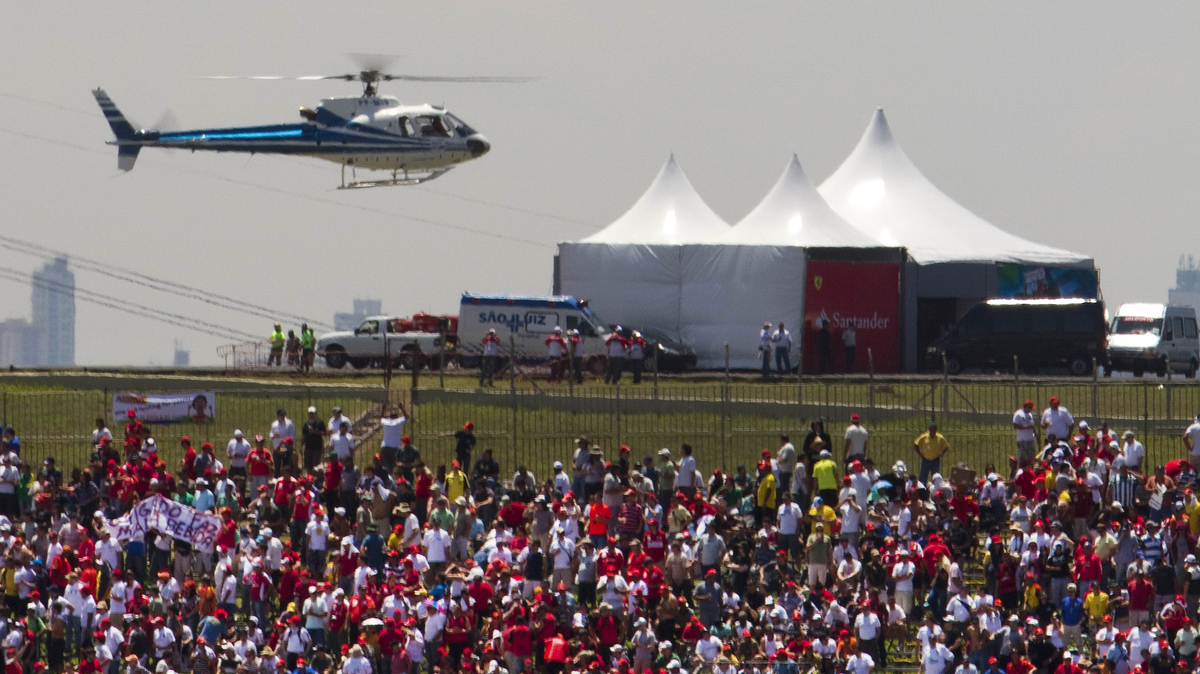 A helicopter carries VIPs to the Brazilian Grand Prix in Sao Paulo in 2010. Politicians taking expensive helicopters and government planes have generated controversy in Brazil.

Indeed he's not alone. Recent revelations showed that the Chamber of Deputies president and social security minister used Brazilian air force planes to go to Rio with their families and friends to watch the final match of the Confederations Cup.

The Senate president was caught using a Brazilian air force jet to go to a wedding in Bahia state. The state governor of Pernambuco was found to have spent more than $2 million in the past 18 months alone on private jet rentals. The opposition wants an investigation.

In Brazil's business capital, Sao Paulo, the uber-wealthy turned to helicopters years ago to escape the traffic below. To get a sense of what these politicians may be experiencing, we went to one of the premier — and one of the busiest — private heliports in Sao Paulo.

It's one of the most luxurious heliports in the world. In the lounge, a family is waiting to be whisked away: The young daughter is accompanied by her nanny carrying a Gucci bag; uniformed attendants ferry the other purchases to the waiting helicopter.

Every day there are some 200 takeoffs and landings here. To keep a helicopter here costs up to $50,000 a month. The actual choppers themselves cost up to $6 million and are tricked out with leather seats and tinted windows.

The people who come here are extremely wealthy, Alex Gama Machado, the flight coordinator, tells me. This is a familiar, safe and closed environment, he says.

A Separate Reality For The Political Class

That's exactly the problem, advocacy groups say. Private travel like this, they say, isn't meant for public servants, even if they can afford it.

Eduardo Militao is with Congresso em Foco, or Congress in Focus, an advocacy group for political transparency. He says the massive protests that took place last month in Brazil started over the terrible state of public transportation.

"People are protesting over public transportation and then you discover the authorities are taking joy rides with public money," he says.

No wonder, he says, the political class doesn't understand what is happening in the country when it is traveling in such a rarefied environment.

Militao says that congressmen and senators already get their travel subsidized — receiving up to $15,000 a month for tickets on commercial carriers.

"We need to identify the guilty, and punish them as an example," he says.