Accessibility links
The Spanish Aristocrat Who Works For North Korea : Parallels A Spaniard born to privilege, Alejandro Cao de Benos is now a staunch defender of North Korea, where he lives half the year and works to promote its ideology. 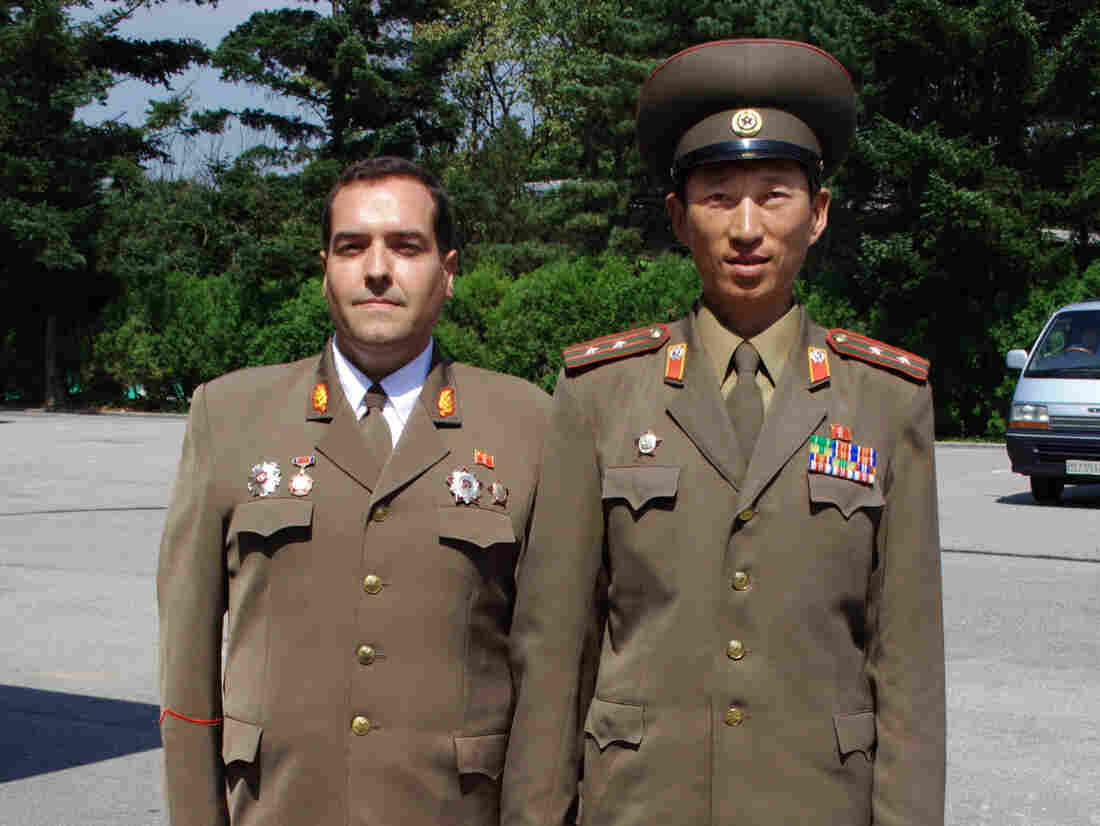 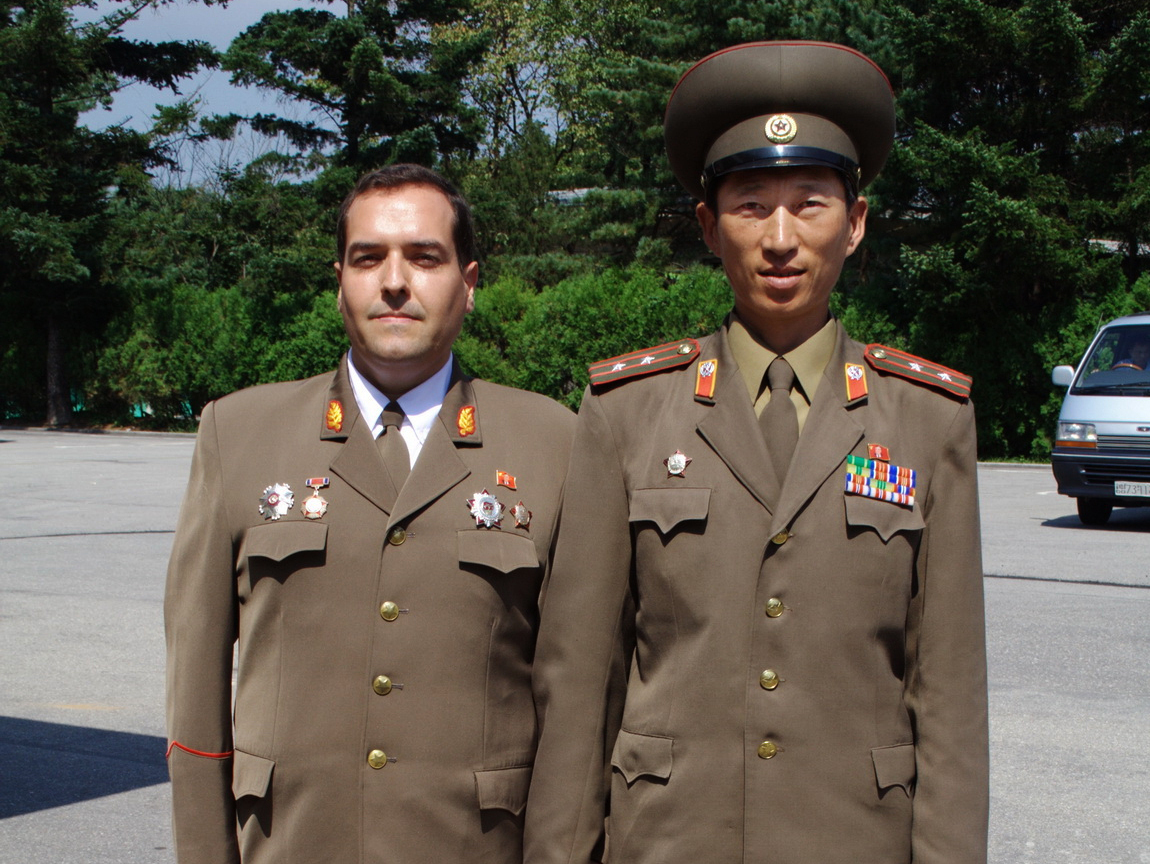 Spanish aristocrat Alejandro Cao de Benos is believed to be the only foreigner working for the North Korean government. He divides his time between North Korea and Europe, where he organizes university conferences on North Korean ideology. He's shown here with a North Korean military officer in Panmunjon, on the border with South Korea.

Cao de Benos, 38, is believed to be the only Westerner ever employed by the North Korean government. He's a Spanish aristocrat, born to a family of landed gentry in northeast Spain, where he agreed to meet NPR for an interview one recent afternoon.

"I consider myself as [much] Spanish as Korean — 50-50. This is my country of birth, and North Korea is my country of adoption," says Cao de Benos, who also goes by the Korean name Cho Son Il, which means "Korea is one."

For the past 11 years, he has held the title of special delegate for North Korea's Committee for Cultural Relations with Foreign Countries. It's an unpaid gig.

He earns money as an IT consultant, working in the past in Palo Alto, Calif., and the Spanish capital, Madrid. He pays his own way to North Korea, where he works six months a year as a minder for foreign visitors.

The rest of the year he gives presentations about North Korea at universities across Europe, and tries to drum up business for the ailing regime.

It's an uphill battle, he admits, given the tough sanctions the United States and its allies have piled on North Korea for failing to halt its nuclear program.

"I once brought a group of Canadian businessmen to North Korea, and they were ready to make investments of 2 or 3 million euros. But how can we transfer millions of euros from Canada to Pyongyang, if the U.S. blocks even a $100 wire transfer!" Cao de Benos exclaimed. "We can't even use credit cards. The U.S. controls everything. When I bring tourists [to North Korea], they all have to carry cash."

Cao de Benos adopted North Korean ideology as a teenager, after his family fortune was squandered. His grandfather had made a series of bad investments. So his dad went from a nobleman to someone who had to find a job. The family moved to Andalusia, in southern Spain, a socialist stronghold at the time.

"It was a big shock! I had to start a new life in Granada. I was 15 years old," Cao de Benos recalls. He hid his aristocratic roots and threw himself into leftist politics.

"While my friends were interested in football and things like that, I was much more interested in philosophy and politics," he said. "Obviously first I got knowledge of Marxism and Leninism, but I heard that there was a country which had another kind of socialism — another kind of experiment based on their own culture and history — and that was North Korea."

His mother, Elvira Perez, wanted to indulge her adolescent son's curiosity at the time. So she took him to a United Nations event in Madrid, where he met some North Korean diplomats.

"From my first encounter with them in 1990, I started my relations and made up my mind to fight for the Korean revolution," Cao de Benos says proudly.

Perez, now 60, describes what it was like raising a fledgling North Korean sympathizer — a Communist — during the Cold War.

"People still don't understand it," Perez said by telephone from her home in Granada. "All our friends and neighbors were really surprised. But I suppose that happens when someone does something different, or takes a different path — people think it's strange. We have always sought to support our two sons. And for Alejandro, this is a passion."

Why North Korea Makes Everyone Nervous ... Except Dennis Rodman

At the time, Cao de Benos was serving as a sort of government minder for American journalist Andrew Morse, then with ABC News. But after a disagreement over the word "famine," Cao de Benos ordered 32 hours of Morse's videotape seized and had the journalist thrown out of the country.

At one point in the documentary, Cao de Benos waves his finger at the camera: "Everybody must be here and see the reality! And destroy the imperialist media that are bombing us every day with lies!"

It's difficult to reconcile the man in the documentary with the seemingly affable character from a seaside village near Tarragona, on Spain's Mediterranean coast.

Cao de Benos speaks passionately about what draws him to Pyongyang year after year. He has an apartment there, where he sometimes even celebrates Christmas.

"Society and life is completely different. In North Korea, there is no stock market, there is no gambling, there is no prostitution, and there are no drugs. Everybody leads a humble life, but with dignity," he said. "You see the big difference? I was working in Palo Alto, Calif. — and what I witnessed was yes, there are some beautiful houses and people with great cars, but there are a few people taking control over the properties and the companies, and they are the ones getting richer while the majority of the people — the workers — are getting poorer."

He also acknowledges seeing a darker side of the isolated Communist country.

"I've been in Pyongyang without electricity 24 hours [a day] — without water," Cao de Benos recalls. "I've been going with my comrades to pick up buckets of water that we will share among six or seven people — and I have seen the situation. I have seen the starvation."

But he blames that on natural disasters and most of all, Western sanctions. He says he believes that North Korean communism — if left alone — would do justice for a greater number of people than capitalism.

"Of course, it's a project. We are not living in a paradise in North Korea, but we want to create such a social paradise. That's our goal," he said. "On the way, we will have mistakes and we will correct them, and get better day by day."