Accessibility links
Despite Repeated Tries, Afghan Peace Efforts Still Sputter : Parallels The latest effort, like others before it, has gone nowhere. With American combat troops planning to leave by the end of next year, the opportunities for peace talks are dwindling. 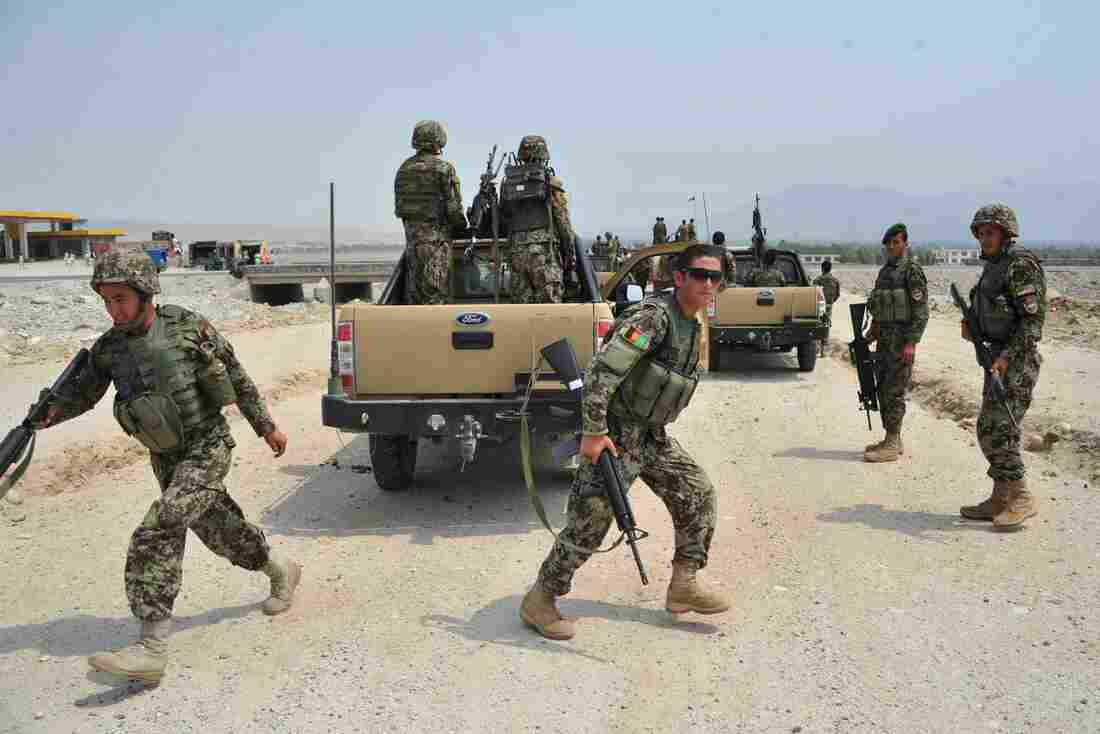 Afghan soldiers take positions following a clash with Taliban fighters on the outskirts of the eastern city of Jalalabad on July 7. The U.S. is trying to organize peace talks, but the latest effort has been put on hold while the fighting continues. Noorullah Shirzada/Getty Images hide caption 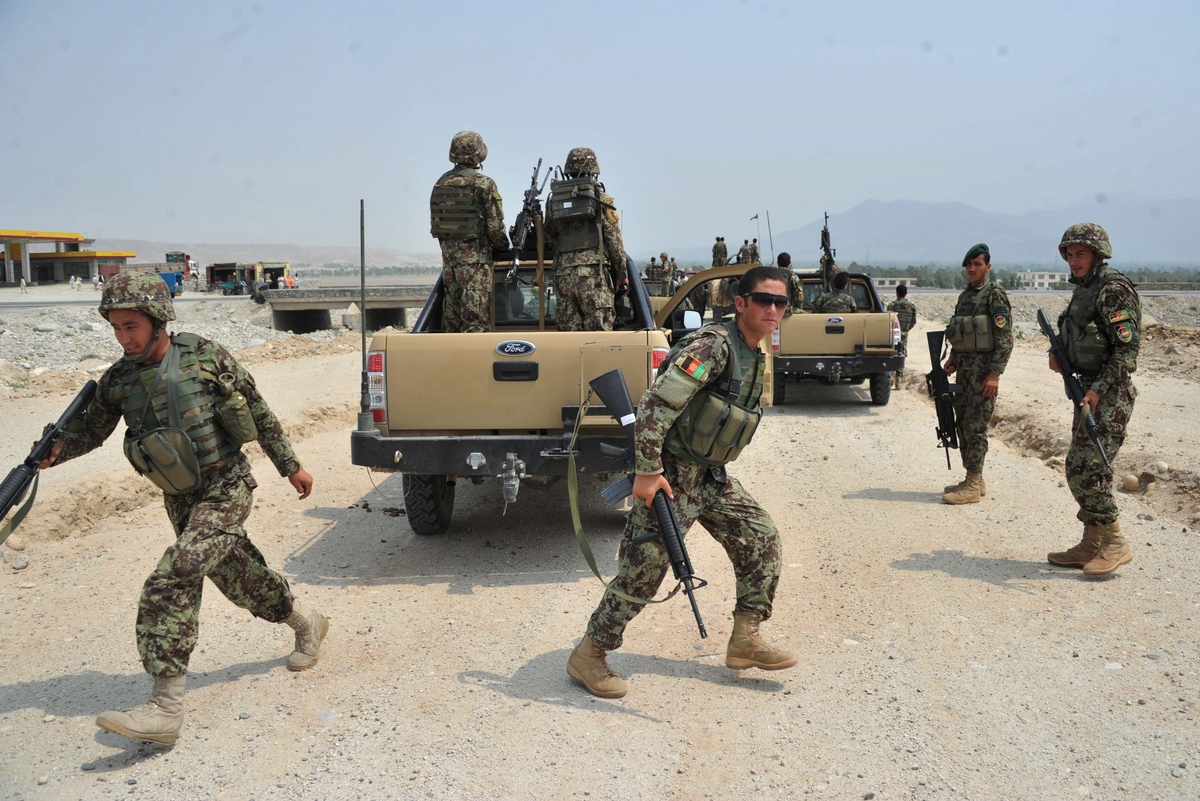 Afghan soldiers take positions following a clash with Taliban fighters on the outskirts of the eastern city of Jalalabad on July 7. The U.S. is trying to organize peace talks, but the latest effort has been put on hold while the fighting continues.

The U.S. has been pushing the Taliban and the Afghan government to find a political solution for the past year and a half. But every time it seems the parties are close to starting peace talks, a new demand or controversy arises and nothing happens.

In the latest attempt, the Taliban finally opened a political office in Qatar, a move that was supposed to set the stage for negotiations. But when the Taliban envoys gave that office the trappings of an embassy, a furious Hamid Karzai, the Afghan president, called off the talks, and they have yet to be re-scheduled.

Amid the uncertain prospects, the Taliban have continued their annual summer offensive, staging major attacks in Kabul and elsewhere.

"I think when you've got a war like this, it's actually easier to continue it than not," says Kate Clark, senior analyst at the Afghanistan Analysts Network, a think tank in Kabul.

"In some ways it seems like you have to decide what this war's about first before you can make the peace," say Clark. She argues that it's not entirely clear anymore what the Taliban are fighting for. Is it the removal of foreign troops? The overthrow of the Karzai government? The creation of an Islamic emirate?

The problem, say analysts, boils down to divisions within the Taliban leadership.

"As long as a significant swathe of the Taliban believes that they are going to achieve a swift military victory after the U.S. departure, there'll be no serious negotiations," says Michael Semple. He was a U.N. envoy to Kabul during the Taliban regime and is an expert on reconciliation issues in Afghanistan.

He says one Taliban faction thinks the Afghan government will collapse after the withdrawal of NATO troops. Therefore, they believe they have more to gain if they keep fighting.

But, another faction believes a military victory is unattainable – and that there's a risk of renewed civil war once NATO troops leave with the Taliban becoming just one of multiple factions fighting for scraps of political power.

'A $34 Million Waste Of The Taxpayers' Money' In Afghanistan

"If they do come to the conclusion that there's a severe risk of civil war rather than a Taliban victory after 2014, then they are more likely to proceed with the negotiations," says Semple.

Stuck In The Starting Blocks

But there are other obstacles. Karzai says the Taliban must negotiate only with the Afghan High Peace Council – a body he hand-picked. This does not sit well with the Taliban.

"They see the Karzai government as a puppet and not worth talking to," says Clark.

And, the Taliban have long insisted that they would only negotiate with the United States - something that has long frustrated Karzai, who wants to control the peace process.

He has lashed out against the U.S. several times, making accusations that Washington is trying to cut him out of the peace process. But the Obama Administration insists peace talks must be among Afghans.

But before the Taliban talk, they want to swap five of their detainees in Guantanamo for U.S. Army Sergeant Bowe Bergdahl, who's been held by the Taliban for four years. Secretary of State John Kerry has indicated that's not happening.

"It's just not where the process is," Kerry said recently in Doha, Qatar.

Another obstacle is the ongoing Taliban offensive – which has been more aggressive than last year. That's in no small part to test the Afghan security forces who are now leading security operations across the country.

But there's another reason for the increased violence according to analysts like Michael Semple, who say the militants are trying to pressure the Afghan government to negotiate and make concessions.

"The worry for Taliban strategists is that if [they] call off the jihad, then [they] lose that leverage," says Semple.

Hundreds of Afghan civilians and security forces are being killed each month, and this makes peace talks even more unpalatable for many Afghans, especially the political opposition.

"Reconciliation cannot be a deal made behind closed doors, between a political clique and an insurgency who has a massive history of atrocity in Afghanistan," says Amrullah Saleh, a former intelligence chief.

Saleh says the High Peace Council members speak only for President Karzai and don't represent the Afghan people. Saleh says that if Karzai makes peace with the Taliban by giving them a share of government and backtracking on freedoms, women's rights or other laws, the Afghan people will not go along.

"If our enemy is brought through the back window, of course we will fight," he says, though he notes the fighting could be political or through more forceful means.

Despite all of these challenges, the U.S. still says there has to be a political solution to end the war. But even Kerry isn't convinced the Taliban are ready to begin talks, let alone sign a peace agreement.

"Nothing comes easily in this endeavor and we understand that the road ahead will be difficult, no question about it," says Kerry. "If there is a road ahead."