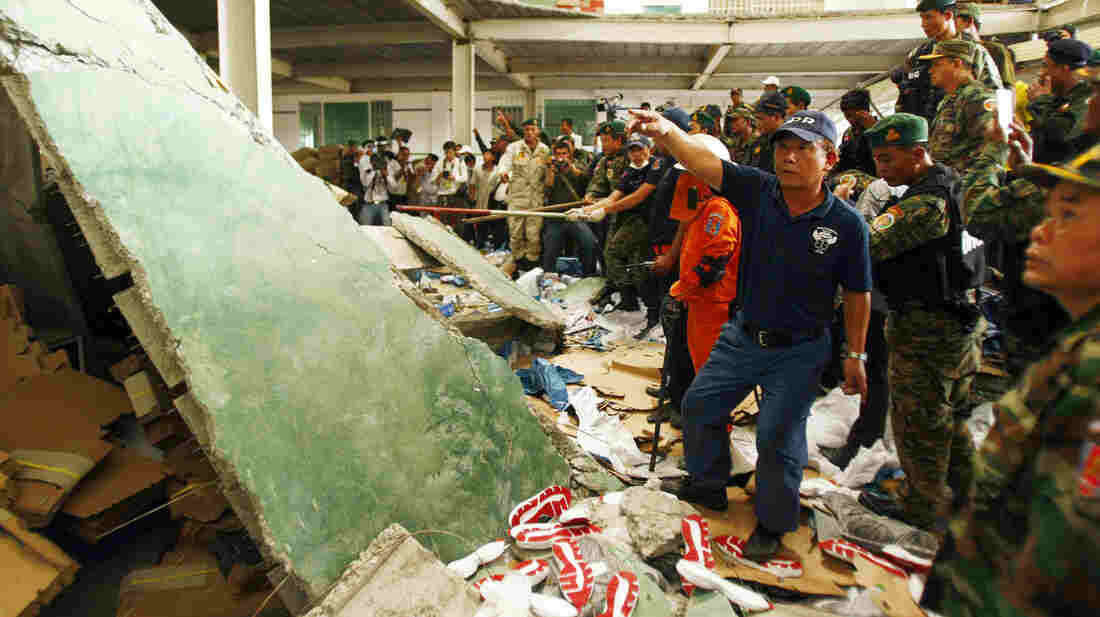 Cambodian rescuers at the site of a factory collapse near Phnom Penh, Cambodia, on May 16. Two workers were killed in the collapse. The garment industry has expanded rapidly in Cambodia, but last week, a new report pointed to a deterioration in working conditions in the country. Heng Sinith/AP hide caption 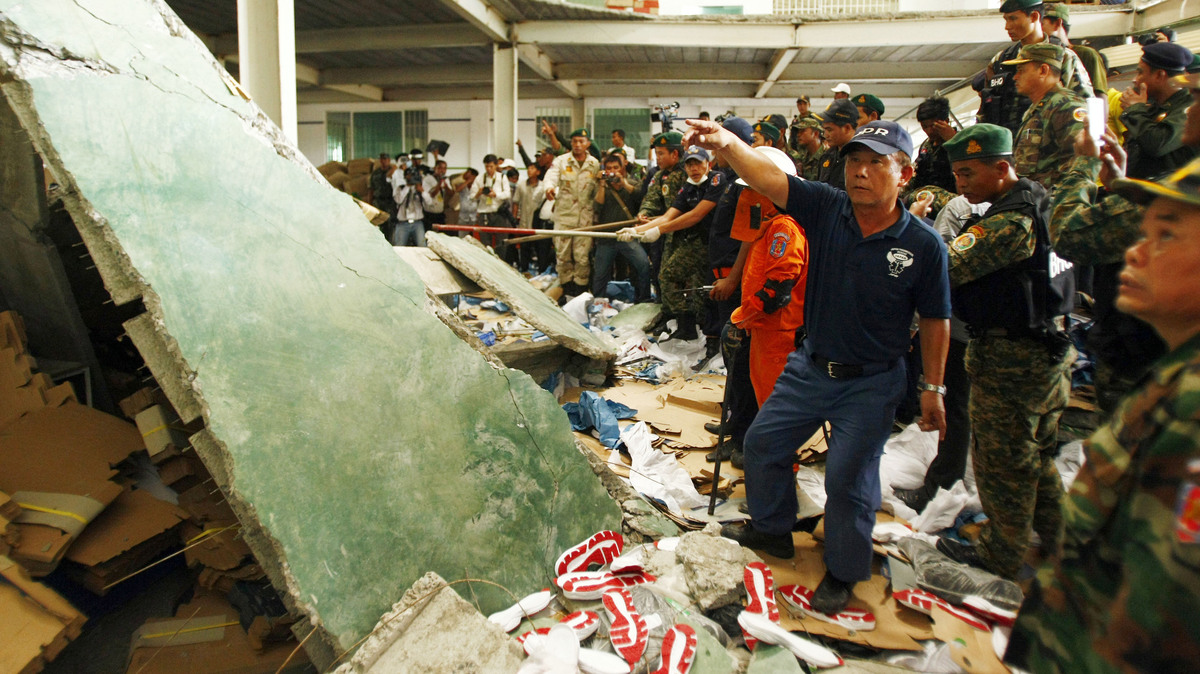 Cambodian rescuers at the site of a factory collapse near Phnom Penh, Cambodia, on May 16. Two workers were killed in the collapse. The garment industry has expanded rapidly in Cambodia, but last week, a new report pointed to a deterioration in working conditions in the country.

We've been looking at working conditions in Bangladesh where the collapse in April of a building that housed garment factories killed more than 1,000 people.

But Bangladesh isn't the only country where conditions in garment factories have come under criticism. The same industry has expanded dramatically in Cambodia in recent years, and a report from the U.N.'s International Labor Organization says compliance on key workplace issues needs to be improved. That's a reversal for a country that was once lauded as a model in the developing world.

Here's more: "This report demonstrates that improvements are not being made in many areas including fire safety, child labor, and worker safety and health."

The report noted "impressive improvements" in the 10 years following the signing of the 1999 U.S.-Cambodian trade agreements, but reversals over the past few years.

The Better Factories Cambodia report was released last week, and it notes that "some of this deterioration may be attributed to the rapid growth of the industry."

The report follows the death in May of two workers at a shoe warehouse south of the capital, Phnom Penh.

Like Bangladesh, Cambodia's low labor costs make it an attractive destination for Western retailers. Here's more about the industry from the Wall Street Journal:

"Cambodia exploded onto the global garment scene in the 1990s. Development specialists saw the sector as a major growth opportunity for the country, which had only recently emerged from the genocidal Khmer Rouge regime, which according to some estimates left 1.7 million people dead during the late 1970s.

"Taking advantage of cheap labor, factories sprouted up in Phnom Penh residential areas as well as on farmland and rice paddies on the outskirts. There are 462 export factories now, said Ken Loo, secretary-general of the Garment Manufacturers Association in Cambodia. That is up from 185 exporting factories in 2001, he said, citing his earliest records.

"But the rapid growth was accompanied by complaints of sweatshop conditions. As activists called for a solution, U.S. officials negotiated a 1999 trade deal with Cambodia. Washington offered to expand access to the American market — which had quotas on garment imports — if Cambodian firms improved labor standards."

The ILO's Better Factories Cambodia is financed by the Cambodian government, garment manufacturers, labor unions and foreign countries, including the U.S. The program has been criticized in recent years over how it monitors facilities in Cambodia.