Accessibility links
Sun, Sand And The Seine: The Beach Comes To Paris : Parallels Each summer, 5,000 tons of sand and nearly 100 palm trees transform a half-mile stretch along river into a beach paradise with volleyball, ice cream stands and sunbathing. Especially now, Paris Plage is a real boon for those who can't afford a more extravagant vacation. 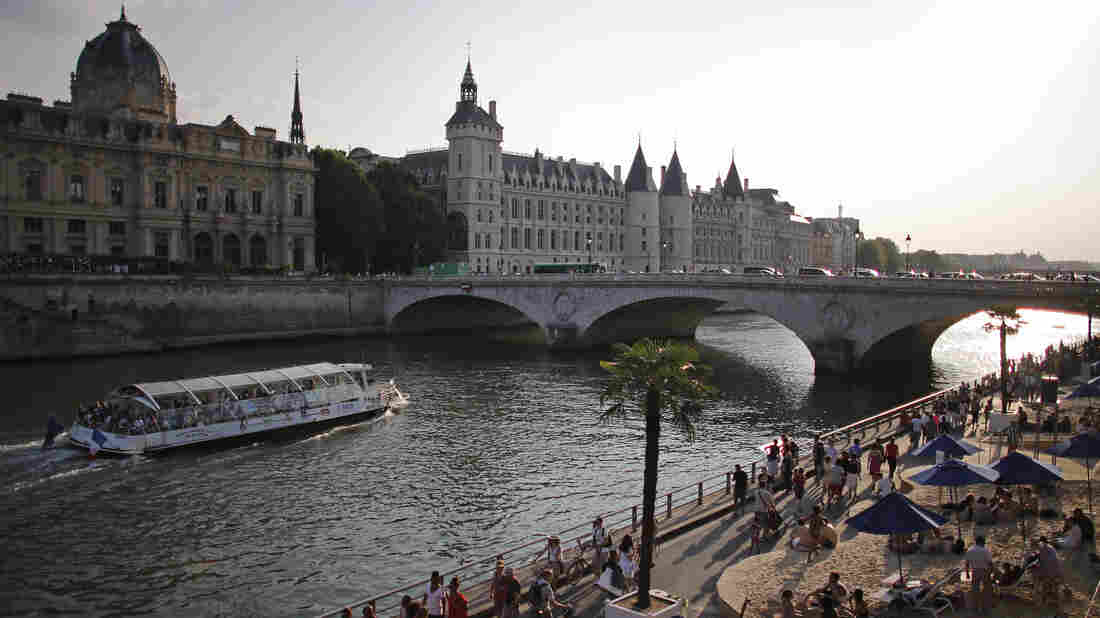 People enjoy the sun next to Pont Neuf bridge as "Paris Plage, or Paris Beach, opens along the banks of the Seine river in Paris, on July 20. The annual free event brings a half-mile of beach into the heart of the French capital. Christian Hartmann/Reuters /Landov hide caption 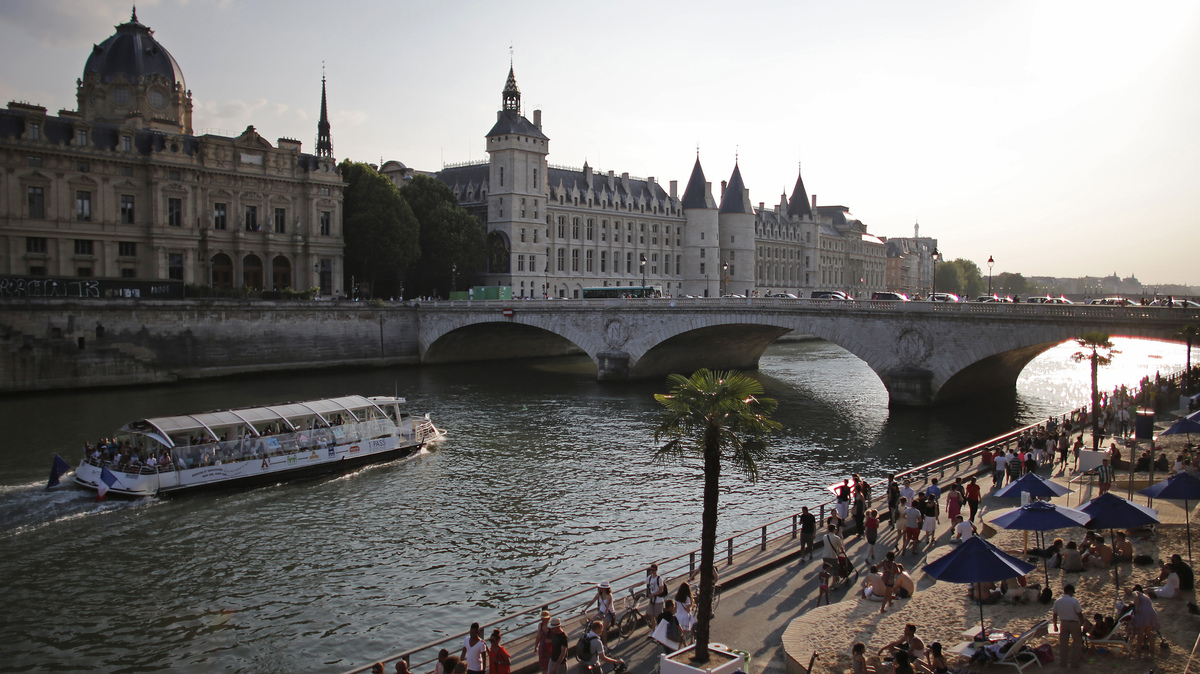 People enjoy the sun next to Pont Neuf bridge as "Paris Plage, or Paris Beach, opens along the banks of the Seine river in Paris, on July 20. The annual free event brings a half-mile of beach into the heart of the French capital.

It's a hot day in Paris and kids run in and out of giant sprinklers set up on the banks of the Seine river not far from Notre Dame cathedral at a place called Paris Beach, or Paris Plage.

Among the wet, excited children are the Obadjia sisters — 4-year-old Judith and 7-year-old Eve. The girls say they come to this magic place every year with their mother and brother, crossing town in a bus to get here.

"I love Paris Plage because we can watch the boats go by," says Judith.

"And when it's hot we can cool off here in the sprinklers," adds big sister Eve.

In what has been a summer tradition in Paris for the past 12 years, the city brings in sand, palm trees and chaise longues to a half-mile stretch of the Seine, turning it into a popular beach every July and August — ending this year on Aug. 20.

'Only Thing Missing Is The Sea' 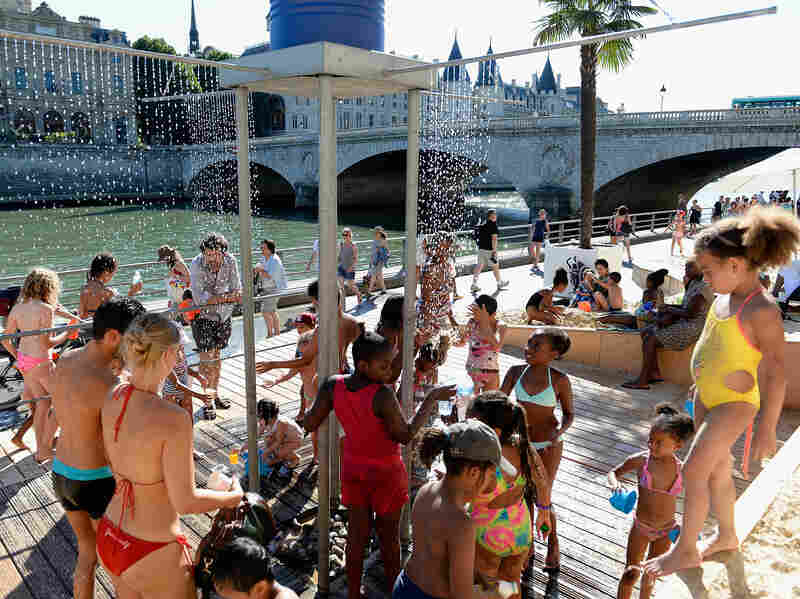 Tourists and Parisians alike cool down under jets of water at Paris Plage on the right bank of the Seine, on Aug. 1. Pascal Le Segretain/Getty Images hide caption 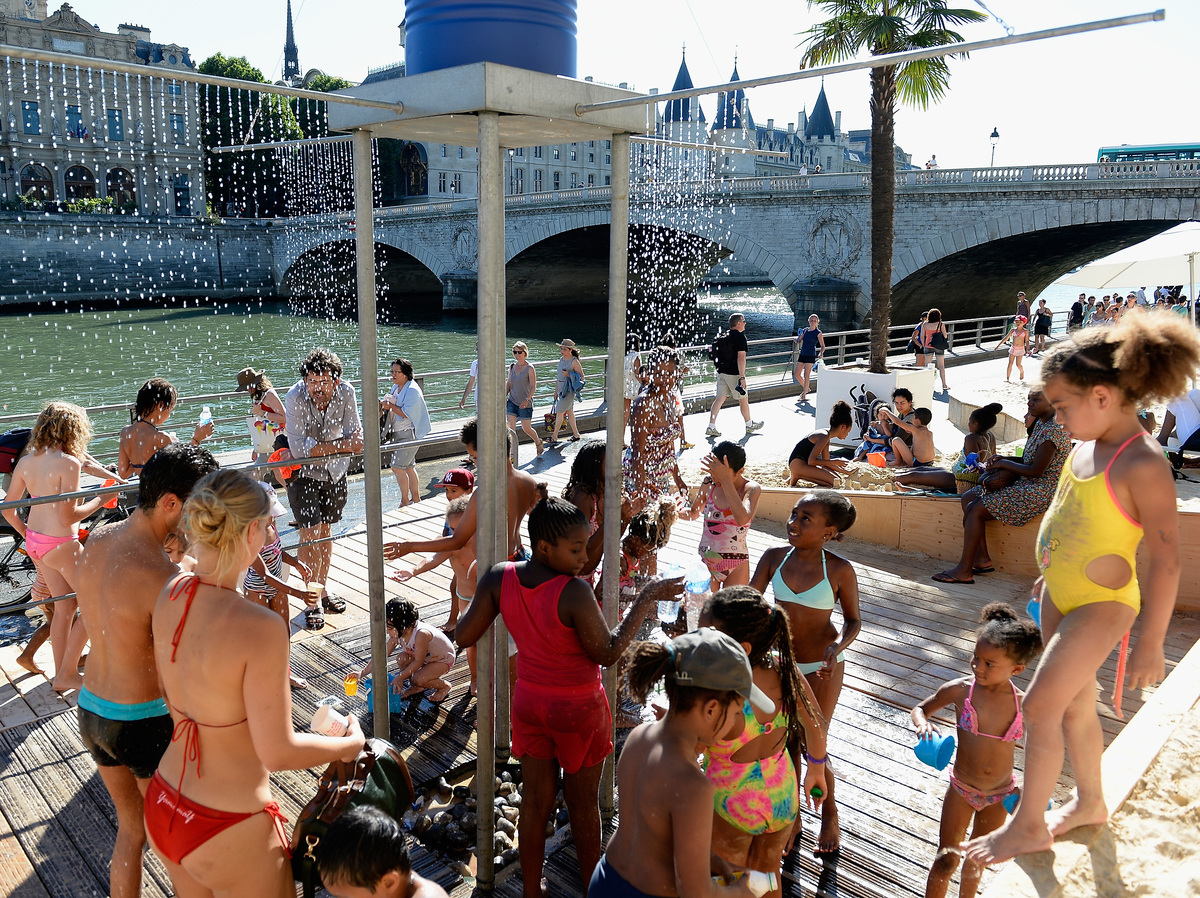 Tourists and Parisians alike cool down under jets of water at Paris Plage on the right bank of the Seine, on Aug. 1.

On a recent day, a group of muscular, tattooed young men — French soldiers on leave — kick back with drinks. The group is from the southern city of Marseille, and they don't have such a high opinion of Parisians.

They're completely stressed out all the time and they don't know how to enjoy life, they say, though they add that the Paris Plage is a step in the right direction.

"The only thing missing is the sea. The real sea and not the Seine," laughs Gregoire Aize. "And the sound of cicadas. Do you know what cicadas sound like?" he asks.

Before I have time to answer, he emits a rhythmic chirping sound that sounds so real, I almost feel as if I'm on the Mediterranean.

The beach spans at least five Paris bridges, including the city's oldest, the massive, sandstone Pont Neuf, with its wonderful carved faces glaring down at you. Between every bridge, the decor of Paris Plage changes. There is sand and palm trees for those who want to work on their tans, and cafes under the plane trees – live jazz included – for those who want to kick back in the shade.

The very tanned Ericsson family from Sweden is relaxing in chaise lounges along the river's edge. Father Christian says his two kids love Paris Plage, even though they can't swim in the river, something they always do back home in Stockholm.

"The river looks kind of dirty," he says. "But the buildings are beautiful, and so are the bridges and the trees. And it was really nice of the city of Paris to lend us these chairs. I guess that makes up for the fact that we can't swim."

A Vacation For Those Who Can't Afford One

Every year, the city of Paris brings in 5,000 tons of sand and nearly 100 palm trees for its beach by the Seine; last year, it attracted 3 million visitors. And nothing seems to have been forgotten. There are ice cream stands, games for kids, and even beach volleyball.

Paris Plage is open from 8 a.m. until midnight, with 250 attendants on site to keep the beach clean and safe. I can vouch for the cleanliness. The public toilets are spic and span and even smell good.

You could almost lose yourself in this little world as you sit on the beach or walk on the boardwalk — until a siren or car horns in the distance pierce your reverie. And you're reminded again that you're in the heart of a big, European city.

Perhaps you're wondering how Paris can afford to keep up such a tradition in the middle of an economic crisis. I spoke to Paris Plage manager Damien Masset. He told me that in times like these, it's even more important for a city to propose activities that are free and open to everyone.

"Paris Plage's main goal is to offer a vacation atmosphere to the Parisians who can't afford to take a real vacation," he says.

That's a good thing for the Monney family, Paris residents whose budget didn't let them get away this year. Leonard Monney and his wife are relaxing under a beach umbrella while their four children build sand castles.

"It's so hot at home that we wanted to get some fresh air. So we came to Paris Plage to see the beautiful view and watch the people walk by," he says. "It's actually very relaxing."