Accessibility links
Israeli Politician Stirs Up The Religious-Secular Debate : Parallels Ruth Calderon's first speech in parliament led some to call her the leader of a Jewish renaissance. But others view her as a real threat — to Judaism itself. 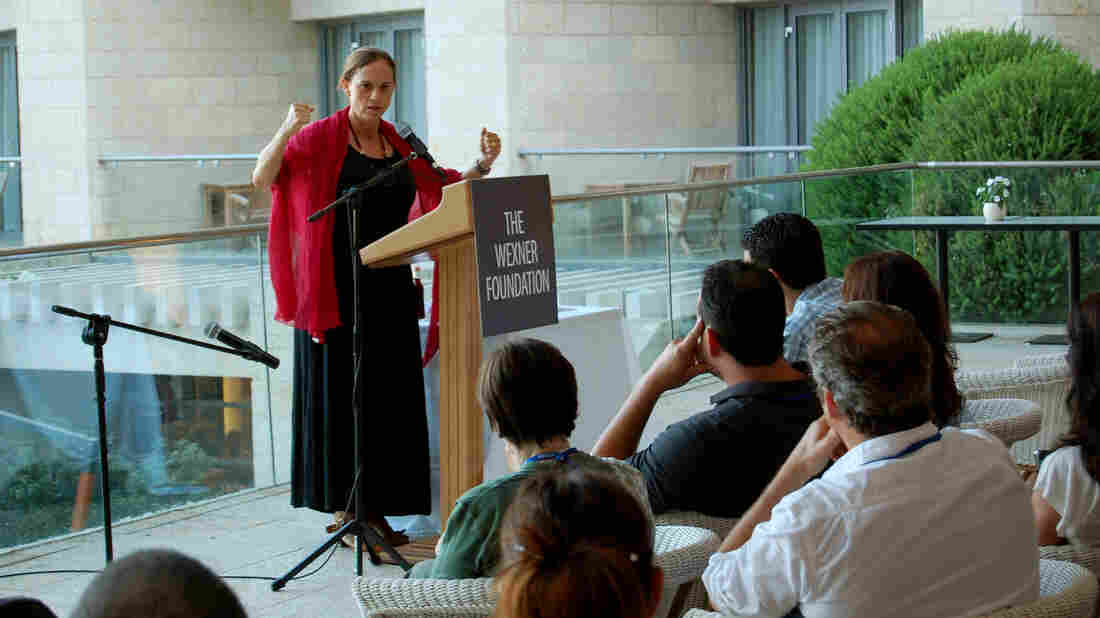 Ruth Calderon, a religious scholar, recently became a member of Israeli's parliament and has been a leading voice on issues that often divide the country's religious and secular communities. Emily Harris/NPR hide caption 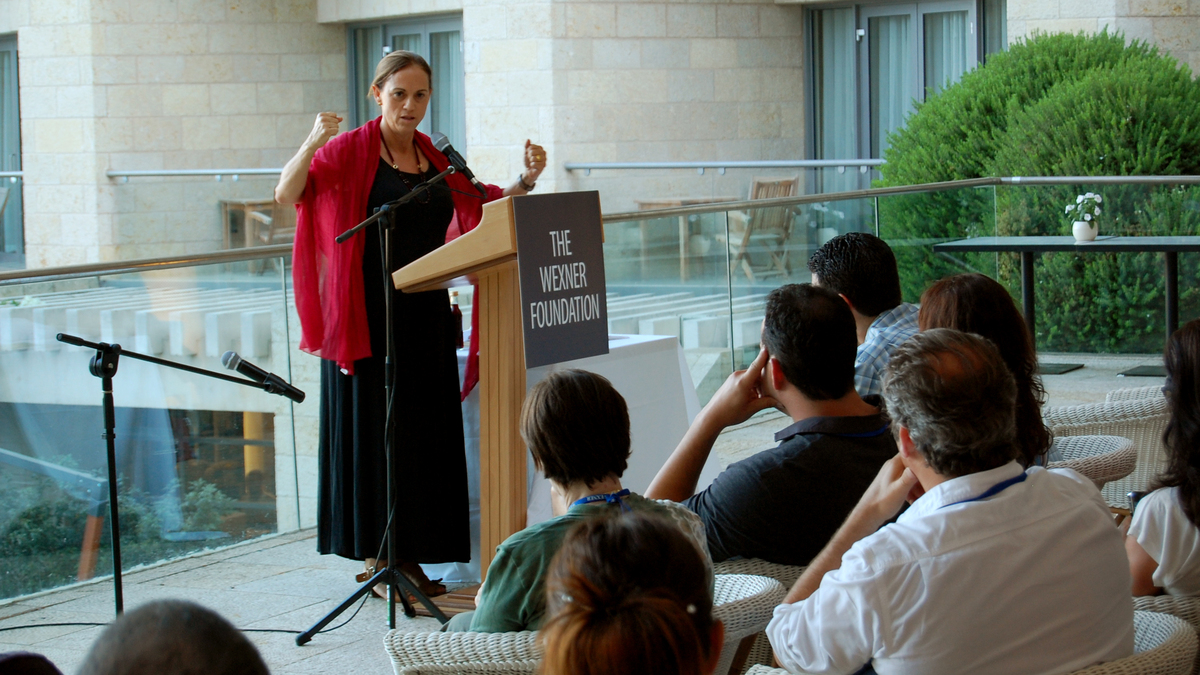 Ruth Calderon, a religious scholar, recently became a member of Israeli's parliament and has been a leading voice on issues that often divide the country's religious and secular communities.

When Ruth Calderon is nervous, she does her nails.

"It helps," she grins. "Did you ever try? It puts you together. If you really are nervous you do bright red."

Calderon, 51, is a scholar and teacher of Jewish religious texts. She is also a novice Israeli politician, part of the new Yesh Atid (There Is a Future) party that unexpectedly took 19 seats in the Israeli parliament, the Knesset, last January.

New lawmakers give a short speech on the Knesset floor to introduce themselves to their colleagues and the country. Calderon was nervous enough that she painted her nails bright red. Usually, these speeches are largely ignored. Her talk got more than 200,000 views on YouTube. 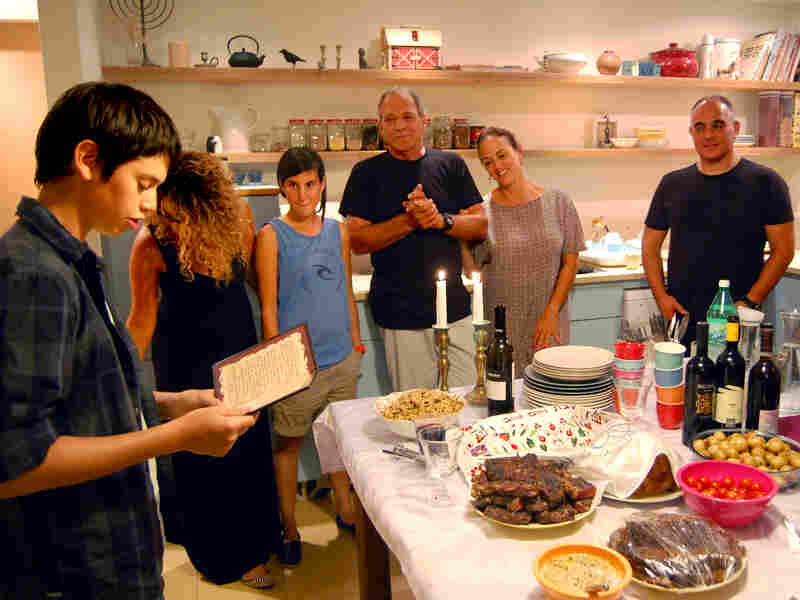 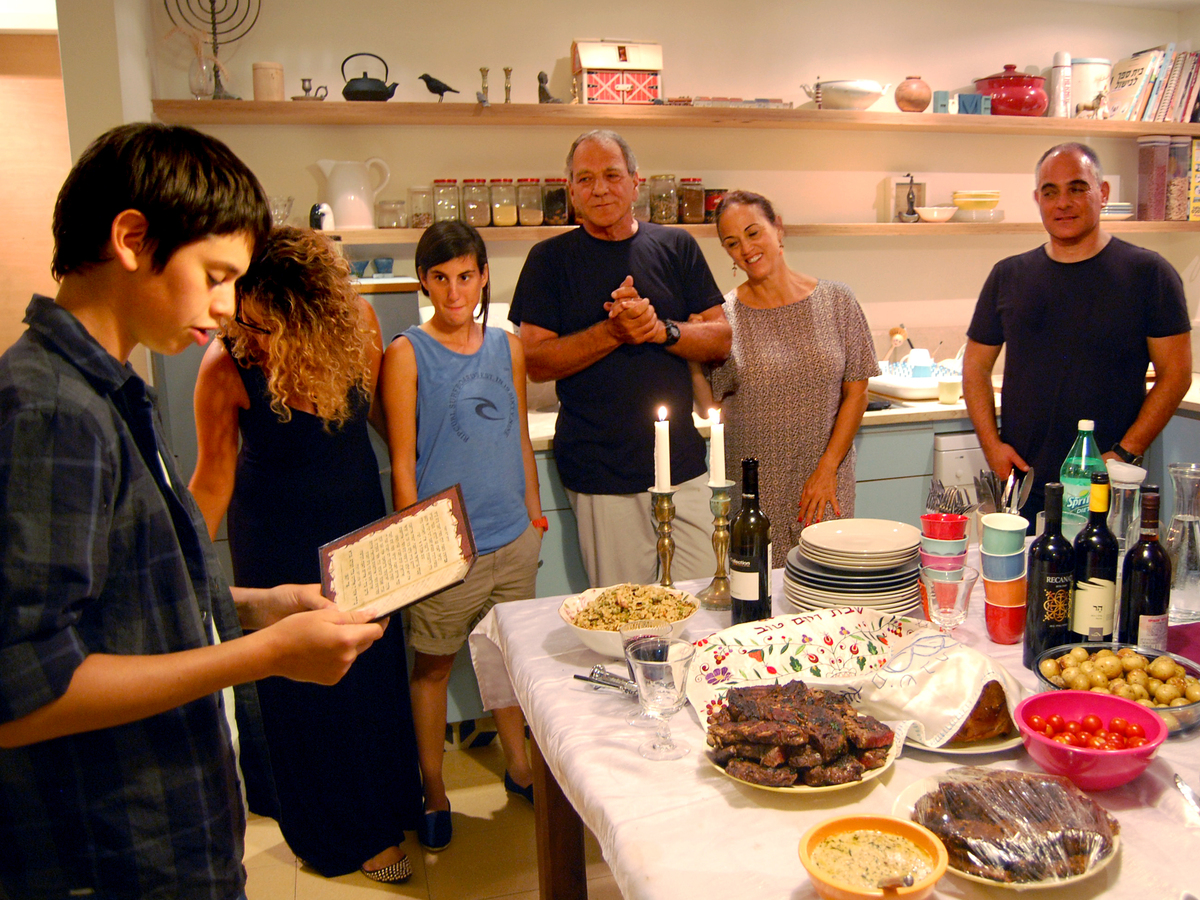 Calderon (center) looks on as her son reads the blessing before Friday night Shabbat dinner.

"I am still shocked," she says. "I had no dream that anybody will hear it except the people in the Knesset that day and the three old men who watch the Knesset channel."

We hear a lot about the conflict between Israelis and Palestinians. But Calderon's speech illuminates a deep internal Israeli conflict over where religion and government intersect.

On the Knesset floor, Calderon essentially delivered a Bible lesson. She read a story from the Talmud, primary Jewish religious texts, and talked about what it meant. Some people now say Calderon is a leader of a Jewish renaissance. But others view her as a real threat — to Judaism itself.

Growing Up Jewish, But Not Observant

Calderon's story starts in the 1960s, in Tel Aviv.

At that time, Israelis were focused on building a strong, modern state. Many Zionists saw the religious traditions of Europe as something to shed. Calderon's father was from Bulgaria, her mother from Germany. Calderon sums up her childhood as "extremely Jewish, not at all observant."

Her family celebrated all the Jewish holidays with gusto, including fasting. They sang prayers over Sabbath dinner every Friday night. Her father sometimes went to the synagogue. But the essence of Judaism as young Calderon learned it wasn't religious per se.

Like all Jewish kids in Israel, Calderon studied the Old Testament — the Jewish Torah — in public school. At home, she was introduced to modern Israeli literature. When she was 10 or 11 years old, Calderon says, she began to search for something more profound. She gathered ideas "like a bird builds its nest," she says, weaving a lesson from school, or something she heard on the radio into the tapestry of her developing beliefs.

She visited different synagogues, too, but didn't stay long.

"It was always religious," she says wryly. "They always wanted to improve me."

Is The Middle East Conflict Getting Even Tougher To Solve?

During mandatory army service, Calderon by chance heard a lecture on the Talmud that thrilled her. She fell in love with religious study. Over time, Calderon earned a doctorate in Talmudic literature, and founded two centers where Orthodox and secular people study Judaism together.

This was very unusual. In Israel, studying Jewish texts has long been the domain of Orthodox Jewish men, who learn together with other Orthodox men. Ya'ir Caspi, who teaches Judaism and psychology at one of the centers Calderon founded, says Calderon managed to make ancient Judaism avant garde.

"Suddenly it was fashionable," he says. "Suddenly people were coming to study Judaism that are not Orthodox, not conservative, not reform. She is a trendsetter."

Beyond the study of Jewish texts, a small group of Orthodox and ultra-Orthodox men are the state-sanctioned interpreters of those texts, and therefore Jewish law. And in Israel, Jewish law governs certain aspects of every Jew's life, no matter if the person is personally religious or not.

For example, there is no civil marriage, although there are ways around that. It can be extremely difficult to get divorced.

It's been this way since Israel's beginnings. The ultra-Orthodox population was very small then. David Ben-Gurion, a Zionist leader and Israel's first prime minister, made an agreement to give ultra-Orthodox rabbis control of certain institutions.

Caspi sees this as giving Judaism away.

Now Israel's ultra-Orthodox, or haredi, community is growing fast, more than twice as fast as the rest of the population. Calderon's party is pushing forward an agenda to reduce subsidies to religious schools and bring more ultra-Orthodox to serve in the military and join the workforce.

She also would like to loosen the grip of ultra-Orthodox rabbis on every Jewish citizen's life. Many haredi see the movement Calderon represents as a new and virulent danger.

"Ultra-Orthodox politicians are facing a new kind of war, a war they are not used to," says Yishai Cohen, who writes for Kikar HaShabbat, an ultra-Orthodox news service that has called Calderon an enemy of Judaism.

"There is a particular problem with Ruth Calderon because she really does know how to study the religious texts. She knows what she is talking about," Cohen says. "When a religious student learns the texts in the correct, original and true manner and then a Knesset member interprets them differently ... the danger is this will confuse the students and the ultra-Orthodox community."

Elana Sztokman, the executive director of Israel's Jewish Orthodox Feminist Alliance, is not ultra-Orthodox, but she is very religious. Sztokman says she was deeply moved by Calderon's Knesset speech.

"It came from the way she just loves the text," says Sztokman, who immigrated to Israel from New York 20 years ago. "A secular feminist woman to own that text, to love that text, to embrace it, with authority in this space of the Knesset, in front of all of Israel.

Calderon's family still gathers every Friday evening for prayers over wine and bread. She reads religious texts every day. But ask her if she believes in God, and she says "sometimes."

The novice politician wants Israel to keep Judaism as its core nationality, its central identity. But she also wants Israel to be democratic. And she wants Jewish people who do not define themselves as religious to find meaning and guidance in Judaic teachings.

Right now, Orthodox interpretations of Judaism affect daily life in Israel from buses not running on the Sabbath to arguments for Israel's continued occupation of the West Bank. If other religious viewpoints gain political influence, Ruth Calderon wonders how life might change.