Accessibility links
Egyptian Crisis Slows Flow Through Gaza's Smuggling Tunnels : Parallels Over the past six weeks, Egypt's military has cracked down on the smuggling tunnels that bring many goods into Gaza. One official estimates that Gaza's GDP has lost $230 million and thousands of jobs over the past six weeks. Israel tightly controls construction materials going into Gaza.

At the very southern end of the Gaza Strip on Monday morning, sweaty men in bare feet carried bags of cement on their backs from a stack near a gaping hole in the ground to a waiting truck.

The cement had come through a tunnel from Egypt, a lucky load that made it.

Over the past several weeks, Egypt's military has cracked down on the smuggling tunnels that bring many goods into Gaza.

The leader of the cement moving crew wears a T-shirt that says "Not In The Mood." He wouldn't say his name, but he would say he is glad to have work hoisting the heavy sacks and sliding them onto a flatbed truck.

"Ninety percent of the tunnels are closed. In the other 10 percent, the goods are coming like ear drops, one at a time," he says. "Since the coup happened in Egypt, we sit for three days, and we work for one." 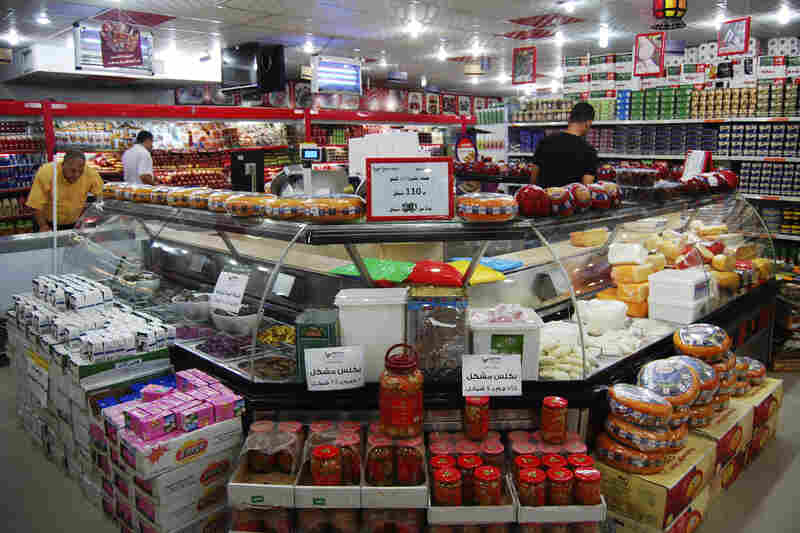 The cheese counter at an upscale supermarket in Gaza City. Although the Egyptian military's crackdown on trade through smuggling tunnels has significantly affected construction and transportation workers, the U.N. says there's no humanitarian crisis. Many consumer goods are allowed in via Israel. Emily Harris/NPR hide caption 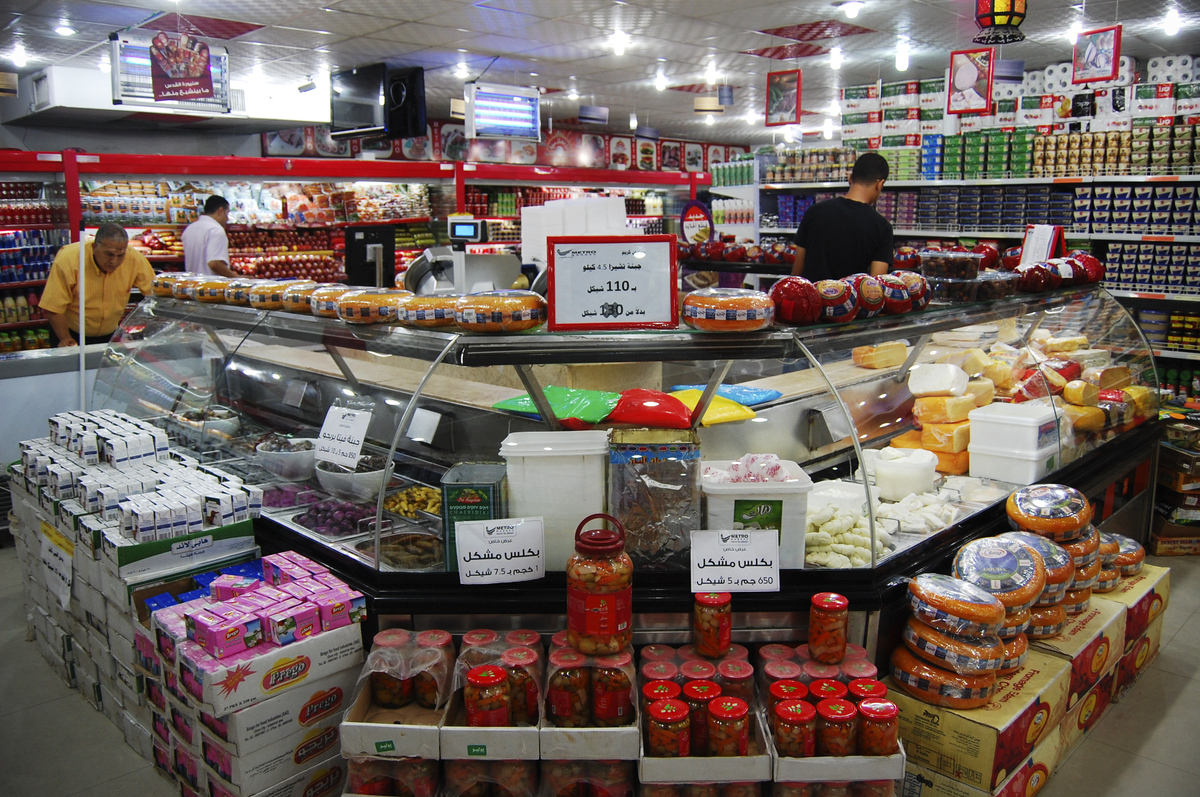 The cheese counter at an upscale supermarket in Gaza City. Although the Egyptian military's crackdown on trade through smuggling tunnels has significantly affected construction and transportation workers, the U.N. says there's no humanitarian crisis. Many consumer goods are allowed in via Israel.

It's hard to know exactly how many of the tunnels under the Gaza-Egypt border really are closed. But Gazan officials say the Egyptian military has bulldozed many openings on their side, as well as stopped trucks on the way to deliver goods through the tunnel system. Economy Minister Alaa al-Rafati says Gaza's GDP has lost $230 million over the past six weeks, and thousands of jobs have ended, at least temporarily.

"Construction is almost paralyzed. Many raw materials, spare parts and maintenance equipment have stopped coming in," he says.

Israel tightly controls construction material going into Gaza, due to concerns that extremists there could use it for military purposes. As a result, most cement comes through the tunnels. Even with the Egyptian crackdown, though, buildings in Gaza are going up; they're just delayed.

Many consumer goods do come in from Israel. In grocery stores, just a few items are missing from shelves.

The situation is not a humanitarian crisis right now, says Adnan Abu Hasna, a spokesperson for the United Nations Relief and Works agency in Gaza.

The commodity he is watching most closely is fuel.

"Because it's not only for cars, but for generators, for hospitals, for bakers, for everything," Hasna says. "And people also, they cannot buy the Israeli fuel because it's very expensive."

Rockets, Cigarettes And A Lion: Just A Few Of The Things Smuggled Into Gaza

When Gazans spot Egyptian gas for sale, cars line up for blocks, and people crowd around pumps to fill plastic containers.

One driver in line says the Hamas government has to figure out something. Political analyst Omar Shaban of Pal-Think for Strategic Studies agrees.

"If the tunnels are not working, the ability of Hamas government to perform well is getting less," he says.

But Shaban says the bigger worry for Hamas is its relationship with Egypt now that President Mohammed Morsi has been ousted. Hamas is an offshoot of Morsi's Muslim Brotherhood. Shaban says the Egyptian military is putting pressure on Hamas by limiting tunnel trade now — in order, perhaps, to get something later. He thinks Hamas has something to offer, particularly in a part of Egypt where the government is facing a wave of militant attacks.

"They can cooperate in Sinai. They are a key player in the Middle East. Hamas is not small thing," he says. "Hamas still can be part of the whole game."

Hamas lost funding from Iran earlier this year — about $250 million, says Ahmed Yusef, a leader in the Hamas movement. As he looks around for allies after Morsi's fall, he says Iran and Hamas are talking again.

"We understand we both have a common interest when it comes to the conflict with Israel. So I think they now, they understand, let's sit and talk," Yusef says. "What kind of strategy that we can build together to handle all these crises that took place in the last three years in the Arab world."

And that includes the crisis in Egypt.