Accessibility links
The Drums Of War, Poolside Edition : Parallels Defense Secretary Chuck Hagel will help direct an attack on Syria, if and when it happens. But for now he's in Brunei for the ASEAN Plus meeting, far from the drums of war. It's an opportunity to build military-to-military ties — and sell weapons. But the prospect of action in Syria is never far away.

The Drums Of War, Poolside Edition

The Drums Of War, Poolside Edition 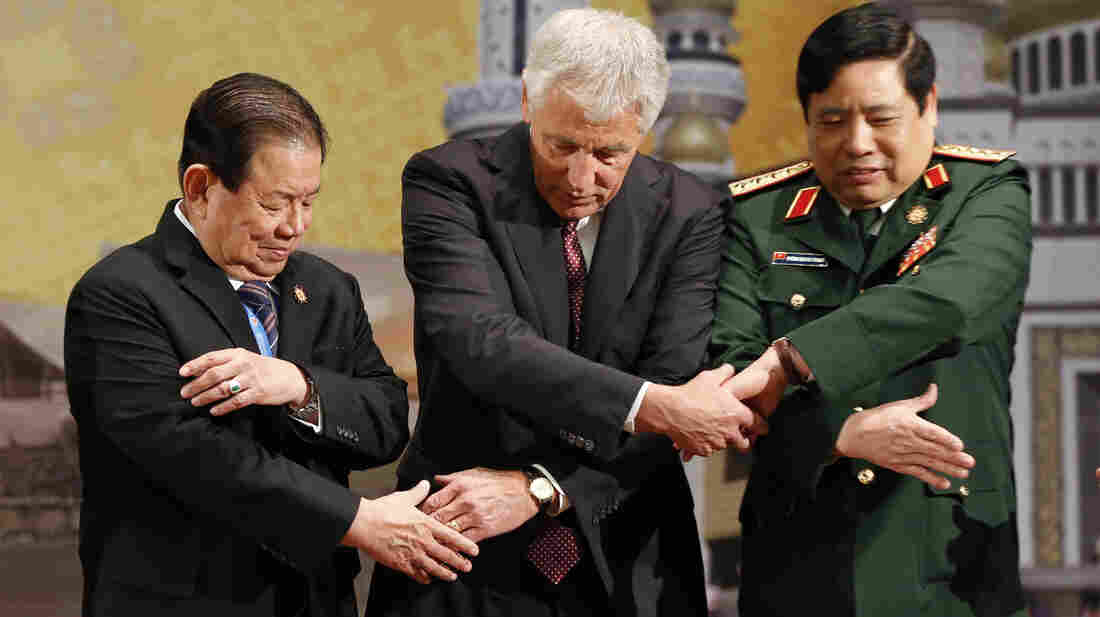 U.S. Defense Secretary Chuck Hagel, center, chains his hands with his counterparts from Vietnam, right, and Thailand before the ASEAN meeting in Bandar Seri Begawan, Brunei, on Thursday. The trip's message: The U.S. is committed to its "rebalance" toward the Asia-Pacific region. Vincent Thian/AP hide caption 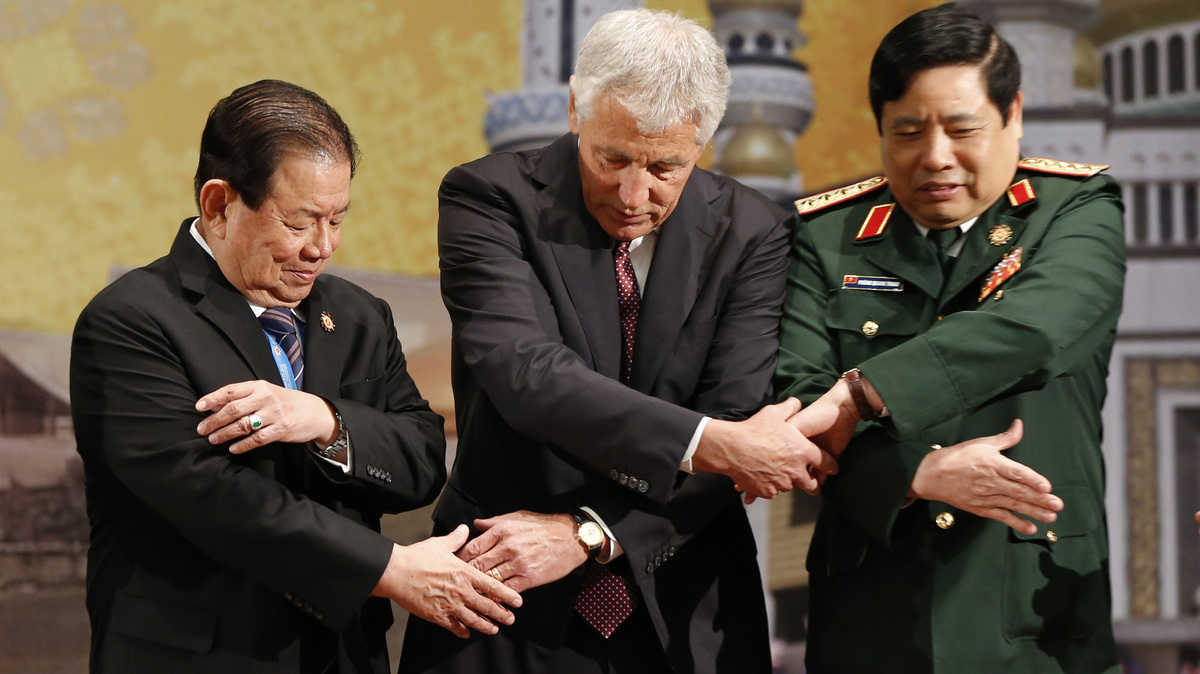 U.S. Defense Secretary Chuck Hagel, center, chains his hands with his counterparts from Vietnam, right, and Thailand before the ASEAN meeting in Bandar Seri Begawan, Brunei, on Thursday. The trip's message: The U.S. is committed to its "rebalance" toward the Asia-Pacific region.

NPR's Larry Abramson is traveling with Defense Secretary Chuck Hagel, who is in Brunei's capital, Bandar Seri Begawan, for a meeting of the Association of Southeast Asian Nations Plus, or ASEAN Plus. Larry sent us this dispatch:

You cannot hear the drums of war here in Brunei, but you can hear the surf from the Brunei coast, or the sounds of splashing from the humongous pools here at the Empire Hotel and Country Club.

Did you know it takes 12,285,000 liters of water to fill up the pools? It says so right here in my Passport to the Empire, a guidebook to this very showy marble palace that is hosting the man who will help direct an attack on Syria, if and when it happens. It is a strange setting, a marble-lined showcase for this very oil-rich sultanate and its ruler, the supremely untweetable Sultan Haji Hassanal Bolkiah Mu'izzaddin Waddaulah ibni Al-Marhum Sultan Haji Omar Ali Saifuddien Sa'adul Khairi Waddien.

This meeting will not address Syria, which is thousands of miles away. But the Middle East crisis has hijacked the headlines, making it difficult for the Pentagon to get out its message: that the U.S. is committed to its "rebalance" toward the Asia-Pacific, despite budget difficulties and the fact that old conflicts keep demanding U.S. attention.

The Japanese defense minister tells Hagel he appreciates U.S. attendance here despite the news from Syria. This occurs during the many "bilats" the Pentagon holds. A "bilat" is a half-hour or so conclave in a gilded room. A "pull-aside" is shorter. (Two "pull-asides" equal one "bilat," in case you're converting.) But the slow process of diplomacy cannot compete with the anticipation of military conflict.

The military emphasizes that it spends more time avoiding war than preparing for it, and meetings such as this one are supposed to be a good example.

The U.S. is helping ASEAN develop a "code of conduct" to help avert even small misunderstandings — such as collisions of ships at sea — that could lead to larger conflagrations. But of course, the Pentagon is also here to announce military sales, such as a plan announced this week to deliver Apache helicopters to Indonesia, or to offer the training that local governments eagerly seek for their nascent military forces.

With great power comes great responsibility. Small countries with rising economies feel they need to back their wealth with the threat of force if they are to hold onto their gains. But once they acquire the toys of war, they may also feel the pressure to use them, something the U.S. military is feeling once again.