Accessibility links
Too Weird To Be True? In China, You Never Can Tell : Parallels Foreign news coverage of China is often deadly serious: corruption, pollution and the like. Then there's the funny and bizarre that often goes viral — like the zoo that swapped a dog for a lion. A number of websites are making these offbeat and satirical tales increasingly available in English. 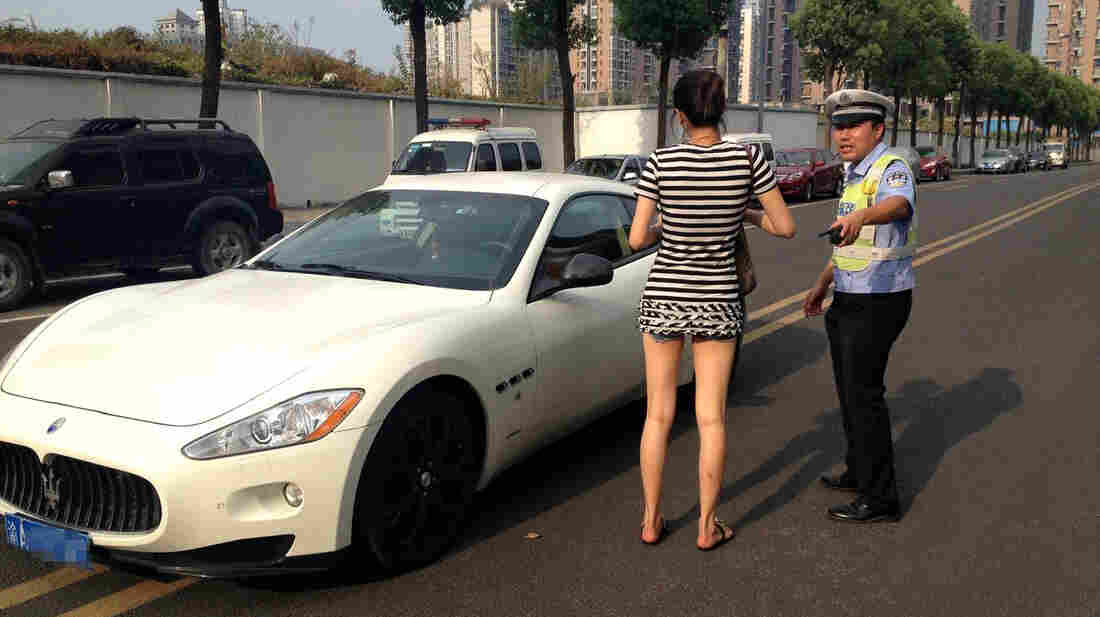 A police officer tickets a young woman for parking a Maserati (estimated to be worth more than $300,000) on the double yellow lines in the middle of the street in Chongqing, China. Stories like this one that go viral in China are increasingly available to English audiences, thanks for a new breed of websites such as ChinaSMACK. ChinaSMACK hide caption 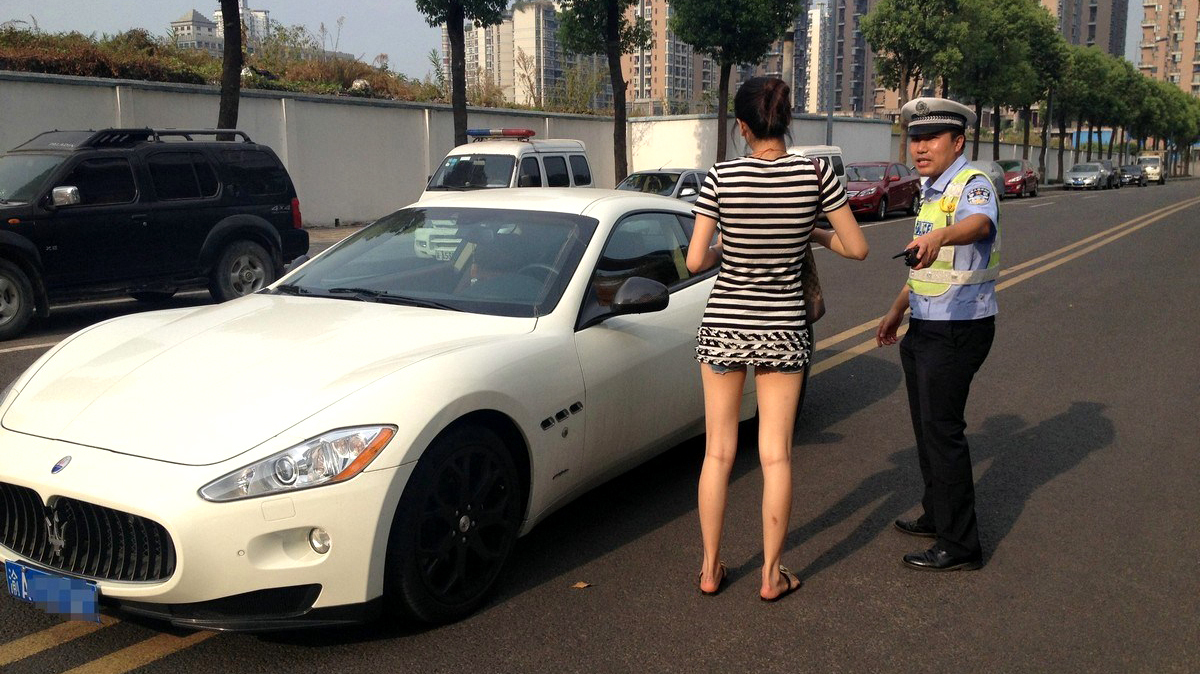 A police officer tickets a young woman for parking a Maserati (estimated to be worth more than $300,000) on the double yellow lines in the middle of the street in Chongqing, China. Stories like this one that go viral in China are increasingly available to English audiences, thanks for a new breed of websites such as ChinaSMACK.

Here are some of the recent news stories that went viral in China that you may have missed:

Foreign news coverage of China is often deadly serious, focusing on topics such as politics, corruption, pollution and food safety. But China — like the United States — also produces a steady stream of funny, bizarre and outrageous news stories.

And these days, you don't have to read Chinese to enjoy them. A growing number of websites are making these offbeat tales increasingly available to English-speaking audiences. 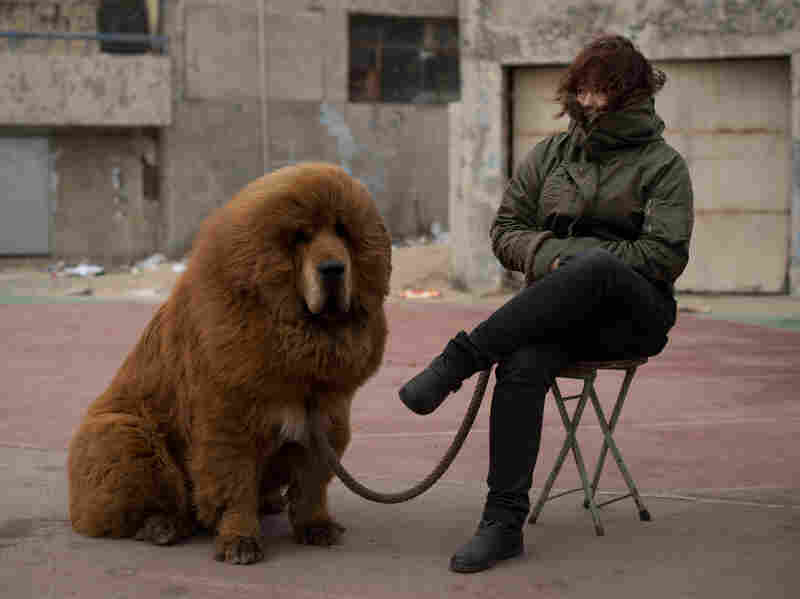 A zoo in central China's Henan province swapped a dog — a Tibetan mastiff like the one shown here — for a lion, in another story that recently swept Chinese cyberspace. Ed Jones/AFP/Getty Images hide caption A zoo in central China's Henan province swapped a dog — a Tibetan mastiff like the one shown here — for a lion, in another story that recently swept Chinese cyberspace.

One of the more amusing recent stories began as an investigative TV report about an exotic fungus unearthed by a farmer in western China's Shaanxi province.

"A village in Shaanxi is purported to have found this incredible rare mushroom," explains James Griffiths, the editor of Shanghaiist, an English-language news blog launched in 2005 that draws about half a million readers a month. (It's owned by Gothamist, a U.S.-based company that runs a network of city blogs.)

Villagers said they had come across it as they hit bedrock while drilling a new well.

Griffiths describes the news report in which a female TV reporter "picks up the mushroom and shows it off and the villagers are all standing in the back looking proud. And basically, the moment it hit the Internet, everyone pointed out: 'That's a sex toy!' "

The next day, the TV program issued an apology, noting that the reporter was still very young and "unwise to the ways of the world."

Soon afterward, the inevitable cellphone video surfaced showing a street vendor trying to sell more "magic mushrooms" for up to $3,000 apiece. He played the TV report on his laptop as a testimonial and batted away skeptical questions.

"The news is real," the con man says with a straight face. "How can it be a lie?"

China's Internet is a target-rich environment for stuff like this.

"We've got over a billion people here," says Griffiths, a 24-year-old Briton. "It's not hard to find weird stories."

ChinaSMACK, which is written by Chinese nationals, was one of the first English-language blogs to highlight strange stories. It started in 2008 and now claims about 750,000 readers a month.

ChinaSMACK's specialty is translating comments by Chinese Web users on articles so English readers can get a sense of popular opinion here. Recent posts include a photo of a Chinese official eating a pear with his phone off the hook, which helps explain why it's often impossible to get through to government offices.

Another post shows pictures of a 22-year-old intern who parked a Maserati in the middle of a city street. Chinese readers figured she was the daughter of a tycoon, a military officer or worse.

"Some may think this car is bought by a government official [for] his mistress," says Peter Nie, a junior editor with ChinaSMACK who translated the story. Nie lives in the southwestern Chinese city of Chengdu and says he works for ChinaSMACK in exchange for beer money.

Mistresses are big on social media here because they are so common. ChinaSMACK recently posted an episode of a TV show that was supposed to be about traffic safety.

A cheerful, friendly cop pulls over a couple for not wearing their seat belts. Having forgotten his license, the driver calls his wife to bring it to him. His passenger — a pretty, 20-something in a blue sundress — panics and flees the scene. After the wife arrives, the cop indicates that the AWOL passenger still owes an 81 cent fine for not wearing her seat belt.

Already suspicious, the wife quickly realizes who her husband has been out with and becomes angry.

ChinaSMACK is run by a woman in Shanghai who goes by the Internet handle "Fauna." She says she likes to remain anonymous to avoid trolls. In an online interview, she says that she started the site to practice her English and expose foreigners to stories that interested Chinese people.

"I hope ChinaSMACK can be an interesting way to learn more about what Chinese netizens are paying attention to and how they think, feel, and react," she writes.

"It's a satirical news site with fake headlines," says the editor, a British citizen who asks to be identified by his first name, Robert. He prefers anonymity to avoid trouble with the authorities.

"Of course being in China, quite a lot of those headlines either end up becoming true or are very close to being the truth," Robert adds.

China Daily Show's tagline is "the only news source visible from outer space" — a mocking reference to the long-held, false claim in China that the Great Wall is the only man-made structure visible from space.

The website has made fun of everything from foreign correspondents to the thousands of pigs found floating mysteriously in Shanghai's Huangpu River earlier this year. Of course, the site also takes aim at Chinese officials and their many foibles, including the tendency to issue boilerplate denials.

A few years back some foreign reporters found black jails where the government detained ordinary citizens without charge. At the time, China's Foreign Ministry spokeswoman was adamant.

"I don't know what prompted you to ask this question," the spokeswoman said when questioned about black jails, which reporters have thoroughly documented. "Things like this don't exist in China. China is a country with a rule of law."

Responses like that inspired a fake article on China Daily Show about a new government answering machine that issues stock denials on a wide variety of stories, ranging from official malfeasance to censorship.

"Press 1 if your call concerns 'purchase of organs harvested from executed criminals,' 2 for 'mysterious deaths linked to Chinese-owned tech firm abroad,' 3 for 'kid got crushed by official,' 4 for 'inexplicably banned from Twitter ..." the 47-minute message begins. ...

"Foreign media agree that the new service is both 'useful' and 'saves time.' "

Of course, there are limits to how far anyone can push satire in China.

All three sites avoid politically sensitive topics such as Tibet and Taiwan; none is currently blocked by authorities. Griffiths, of Shanghaiist, says that's because Chinese officials can be quite tolerant of humor on the Internet — especially if it isn't in Chinese.