Accessibility links
Which Bad Syria Option Do You Prefer? : Parallels President Obama has kept his distance from the Syrian civil war for the last two years. Now a major debate is underway, and none of the choices looks appealing. So you decide. 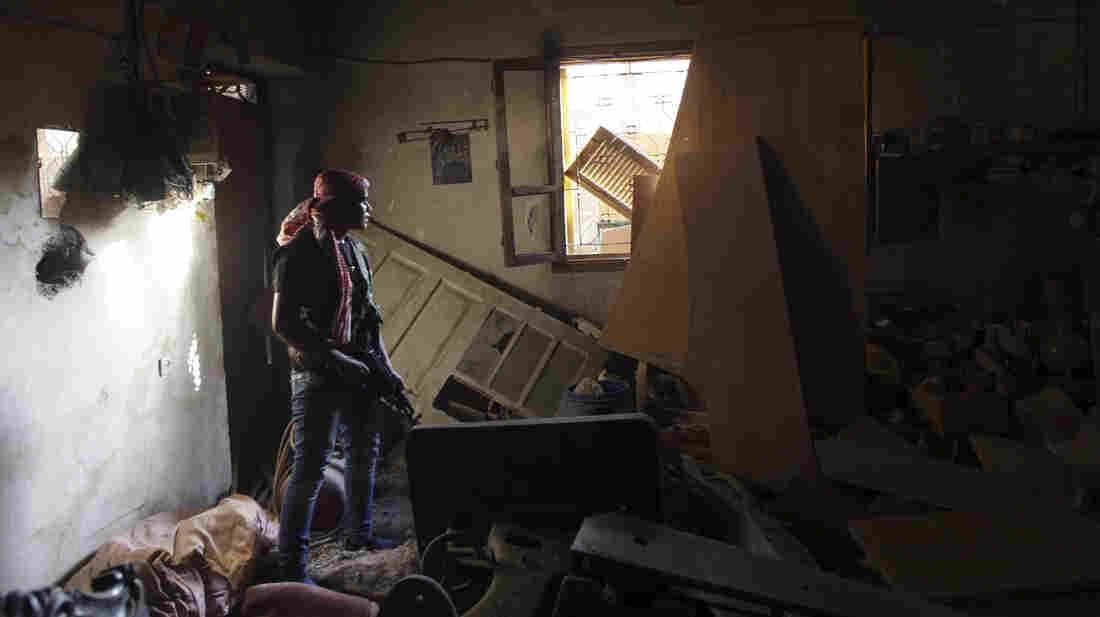 A rebel fighter takes cover inside a damaged building in the eastern Syrian city of Deir al-Zor on Tuesday. The U.S. is training a small number of rebels and has pledged to provide them with arms. Khalil Ashawi/Reuters/Landov hide caption 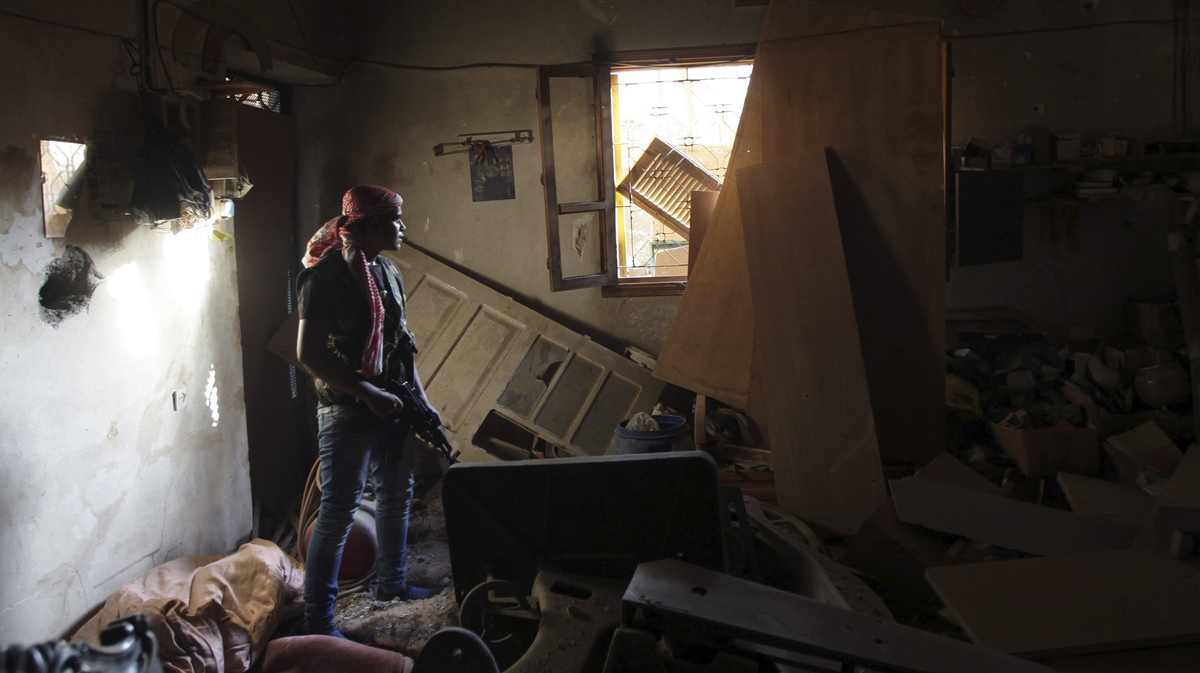 A rebel fighter takes cover inside a damaged building in the eastern Syrian city of Deir al-Zor on Tuesday. The U.S. is training a small number of rebels and has pledged to provide them with arms.

Syria's civil war is complicated, but at least there's a consensus among American policymakers: There are no good options.

So let's pretend you're the president and you need to decide what action, if any, the U.S. should take. The possibilities are endless, and plenty of unintended consequences are sure to follow.

To make your decision manageable, we're presenting four basic options. We realize they are not mutually exclusive, but you have to focus on something. You can make your choice at the bottom of this story. 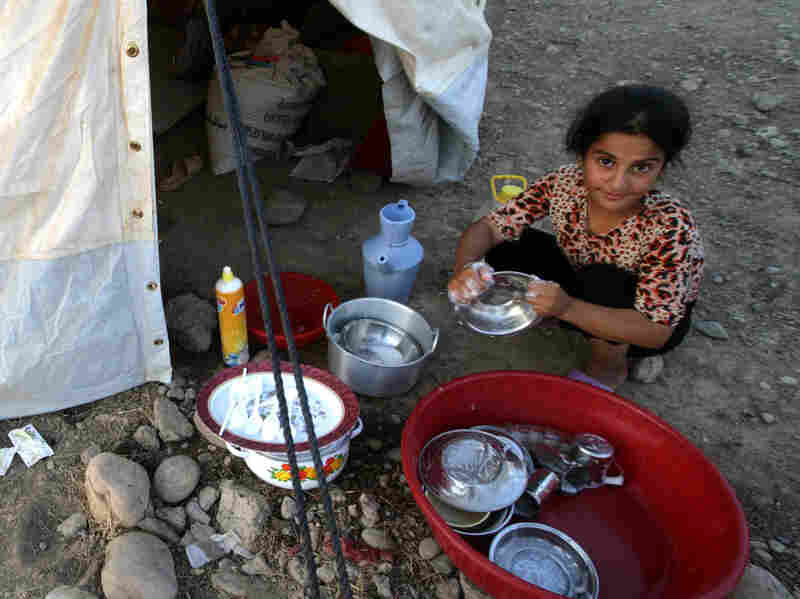 A Syrian girl washes the dishes at the Quru Gusik refugee camp in northern Iraq, last month. More than 2 million Syrians have fled their homeland since the uprising began in 2011. Safin Hamed/AFP/Getty Images hide caption 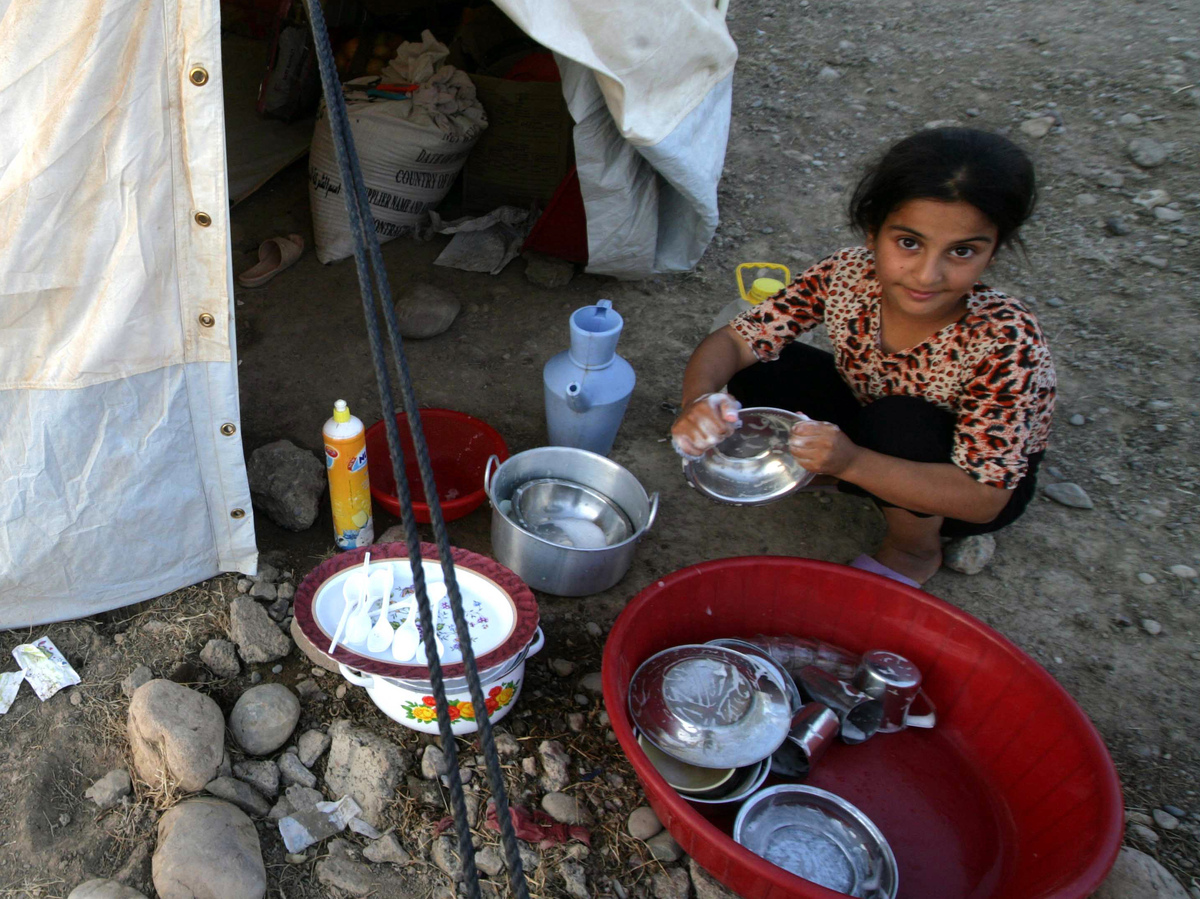 A Syrian girl washes the dishes at the Quru Gusik refugee camp in northern Iraq, last month. More than 2 million Syrians have fled their homeland since the uprising began in 2011.

Step Up Humanitarian Aid: Two million Syrians have now fled their homeland and more than 4 million are displaced internally, according to the United Nations. Combined, that's more than a quarter of the country's 23 million people. This is placing tremendous strain on neighboring states like Turkey, Jordan and Lebanon.

As president, you know Americans are tired of grinding, open-ended wars in the Middle East. You don't think Syria is a core American interest and you don't want to get sucked into the country in a major way. You oppose using American military force in general, and sending in U.S. ground troops in particular.

But Syrian civilians are suffering. The U.S. has been sending hundreds of millions of dollars annually to help; the United Nations says it needs billions.

Here's one dramatic example: The Zaatari Refugee Camp in the Jordanian desert, near the Syrian border, didn't exist until a year ago. Now it's home to more than 120,000 Syrians living in tents, making it one of the largest cities in Jordan.

Arm The Rebels: President Obama said in June that the U.S., which has been providing nonlethal aid to the rebels, would begin supplying arms to moderate rebel groups. However, the details have never been released and the arms have yet to start flowing.

Sen. John McCain, the Arizona Republican and a leading proponent of more robust action, said it was "shameful" that the weapons have not reached the rebels.

"We should have done it two years ago," McCain said Monday after he discussed Syria policy with Obama at the White House.

If and when the weapons do reach the rebels, they are expected to consist of rifles and bullets and other small-bore arms, and not heavier stuff like anti-tank and anti-aircraft weapons.

Some U.S. officials are wary of providing large quantities of heavy weapons to the rebels, arguing that the opposition is a mixed bag, ranging from secular fighters who favor a democratic Syria to Islamist extremists aligned with al-Qaida.

NPR's Tom Bowman reported that the CIA is already training small numbers of rebels in Jordan, and now there's talk of calling on the U.S. Army to expand those efforts. Gen. Martin Dempsey, the chairman of the Joint Chiefs of Staff, recently told Congress that building up the rebels could be a more promising option than U.S. military strikes. 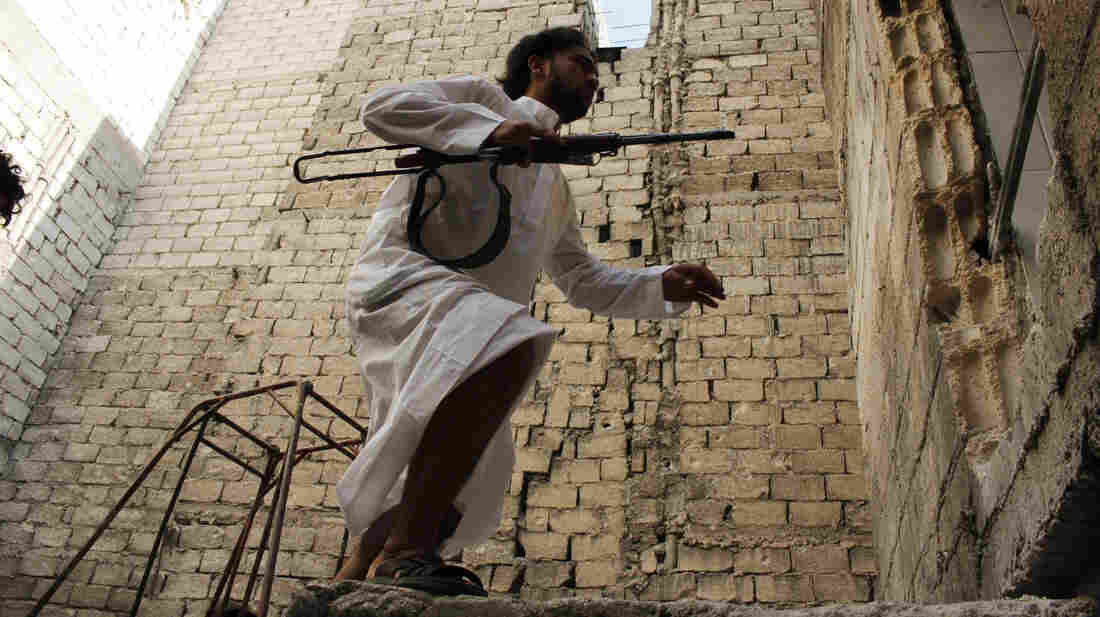 A rebel fighter moves between buildings in the northern Syrian city of Aleppo on Wednesday. Molhem Barakat/Reuters/Landov hide caption 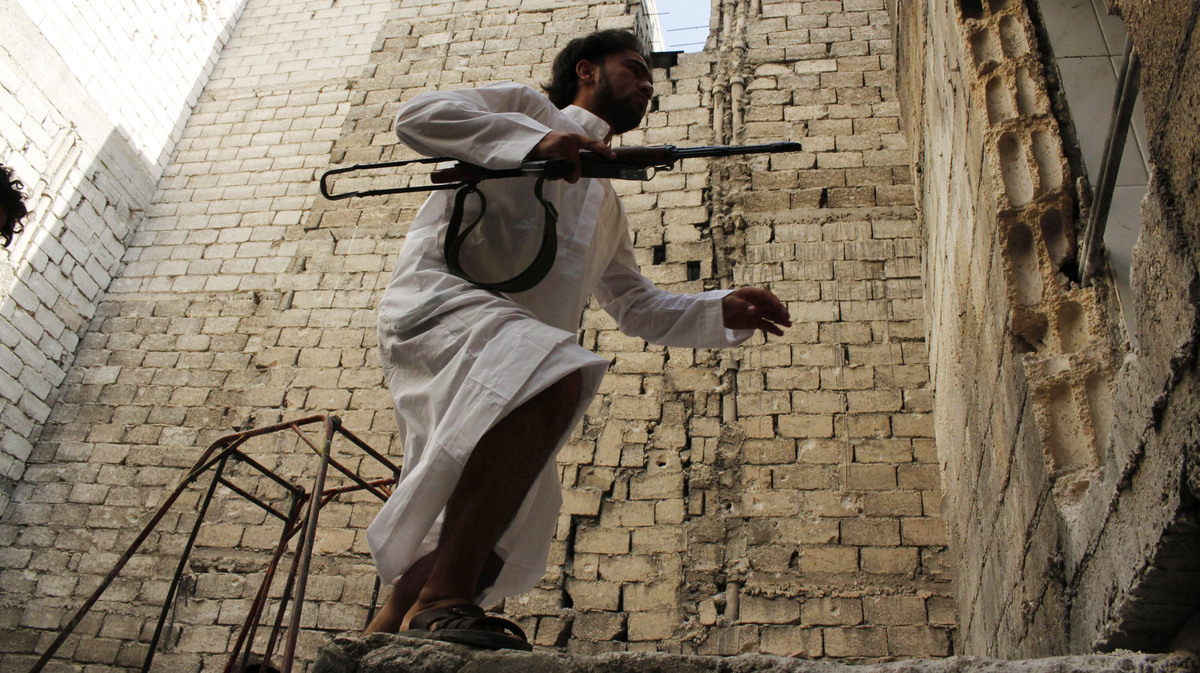 A rebel fighter moves between buildings in the northern Syrian city of Aleppo on Wednesday.

Limited U.S. Strikes: This is the course Obama advocates on the grounds that the U.S. cannot let Syrian President Bashar Assad go unpunished for his alleged use of chemical weapons last month.

The U.S. action would likely consist of a couple days of cruise missile strikes launched from naval ships in the eastern Mediterranean. The most likely targets would be military aircraft and airports, military bases and perhaps military headquarters and some government buildings.

"Absent an effective United Nations, the only sheriff who can enforce this vital international law is the US, supported by a few close friends like France," former U.S. diplomat, Nicolas Burns, writes in GlobalPost. "If we don't insist on a zero tolerance standard, the chemical weapons genie will likely be out of the bottle forever."

However, critics of the U.S. plan claim it is unlikely to alter the course of a war that is currently a stalemate. And, they add, it could have the unintended effect of rallying Syrian public support for Assad.

A Sustained U.S. Attack: Support for this option appears quite limited, but there are some, like McCain, who are calling for robust military action with the goal of driving Assad from power.

"We have to pay attention to this region and we have to bring Bashar Assad down," McCain said.

U.S. firepower has been decisive in removing, or helping remove, several groups and leaders in the past decade, including the Taliban in Afghanistan in 2001, Saddam Hussein in Iraq in 2003 and Moammar Gadhafi in Libya in 2011. Yet all of those countries remain unstable to this day.

The U.S. could neutralize Syria's air power advantage and put the Syrian military on the defensive, giving the rebels the opportunity to advance.

But given the extended wars in Iraq and Afghanistan, Obama has been adamant that the U.S. will not engage in a lengthy fight in Syria and has emphasized that U.S. ground troops will not set foot there.

Yet long before the current debate, U.S. military leaders said it would take tens of thousands of U.S. troops in Syria to properly secure that country's extensive chemical weapons stockpile.

Multiple opinion polls show a solid majority of Americans oppose any military intervention. And aside from France and Turkey, the international community largely rejects military action. If you choose this course, you would be largely on your own.

Those are your options. You can choose here and feel free to add your comments as well.