Accessibility links
In Macho Mexico's Lucha Libre, The 'Lady' Is Often The Champ : Parallels Pro wrestling in Mexico is usually associated with buff, tough show-boating guys. But it's also an unlikely niche for the country's LGBT, thanks to Los Exóticos — campy, mostly gay male wrestlers who are known as much for their wrestling skills as they are for their feminine garb and flirty behavior.

Professional wrestling, known as lucha libre — literally, freestyle wrestling — is a big deal in Mexico. It's a sport that's generally associated with machismo: buff fighters with names like Nemesis and Aguila Imperial (Imperial Eagle) strut around in a rope-bound ring, wearing shiny spandex outfits and colorful masks. They make big threats and promise spectacular smackdowns. The high-flying attacks are mesmerizing.

It's also an unlikely niche for Mexico's LGBT community.

Exóticos — or Exotics — are campy, mostly gay, male luchadores, or fighters. With names that might well be titles of Danielle Steel novels en Español — like Diva Salvaje, Pasión Kristal and El Bello Califa (Beautiful Califa) — they participate in regular fights, but wearing full makeup and often very feminine outfits. They flirt with the ref, blow kisses at the crowd and come on strongly to other fighters.

Filmmaker Michael Ramos recently made a documentary about them called Los Exóticos. He says Exóticos are nothing new: they've been around since at least the 1940s. Back then they didn't wear makeup, and they weren't as overtly sexual as they are today.

Texas-born Dizzy "Gardenia" Davis, who fought in Mexico in the '40s, is considered one of the first Exóticos. The show would start as soon as he left his dressing room, accompanied by his butler and carrying a bouquet of gardenias. Before climbing into the ring, he would give a flower to each woman in the first row. Then, Davis' butler would perfume and groom him.

Another famous Exótico, El Bello Califa (Beautiful Califa), had the same histrionics as Gardenia Davis, which were captured in this short film.

Despite their antics, Exóticos fight like the best of them. But their technical skills are often overshadowed by their overt sexuality — and by the audience chants: Inevitably, as soon as an Exótico takes the ring, the audience begins to chant "Beso! Beso! Beso!" — demanding a kiss.

And they get what they ask for. The Exótico will pin down his opponent, or the ref, and plant a big, wet kiss on them. And the crowd goes wild.

Ramos admits that without a doubt, it's problematic that Exóticos involve stereotyping of gays, and that homosexuality is played for laughs.

In fact, although most Exóticos are gay on and off stage, there are also fighters like Máximo, who lead a straight life out of the ring. But, as he explains after a fight in Magdalena Culhuacán on the outskirts of Mexico City, still sweating and with a seriously injured jaw, he found that he could make more money playing an effeminate man for laughs.

Among the audience, regardless of whether there's an Exótico in the ring, strong gay slurs always pepper the chants. So I wondered: In a country like Mexico, associated with strong machismo and, like much of Latin America, homophobia, why would a young gay man choose this career path? 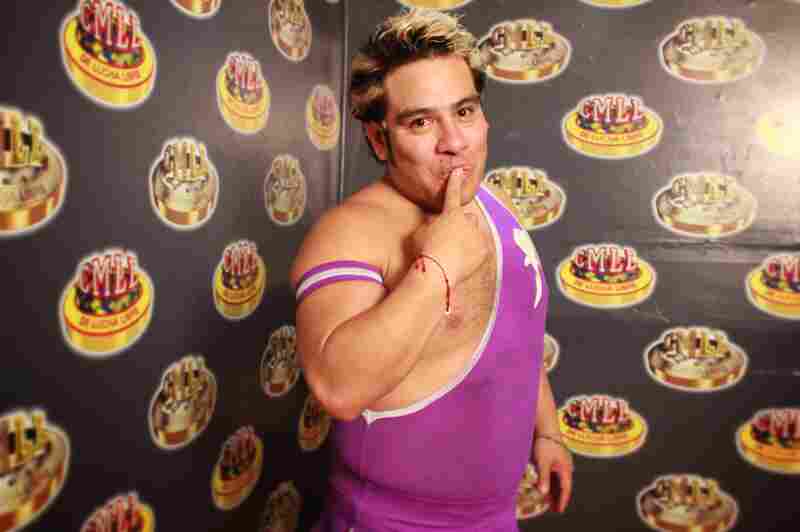 Although most Exóticos are openly gay in and out of the ring, some are not. Outside of his fighting career, Máximo has a wife and children. He says that at a certain point in his career, he figured out it would be more profitable to play the part of a very effeminate gay man. Daniela Herrerías for NPR hide caption

Backstage at a fight in Magdalena Culhuacán (and by backstage I mean on an abandoned bus behind the ring), I catch up with the Exótico named Pasión Kristal. He was born Gabriel Centella Damian, in the city of Villa Hermosa in Mexico's Tabasco state. At a young age, he says he felt attracted to the fighters he'd see in the ring. He went to the gym to ask to train with the luchadores but got something else: a beating.

He came back the next day, bruised and bloodied, to learn. This time, they let him stay.

Still intrigued, I reach out to Francisco Zarate, a gay rights activist in Mexico. He says in recent years, the passage of legislation protecting gay rights has really turned the tide of homophobia in Mexico.

A huge fan of Exóticos, Zarate explains that traditionally, Mexican media has featured straight male comedians playing the part of the bombastic gay guys on camera for laughs. Fighters like Pasión Kristal, on the other hand, are gay in and out of the ring. And that's why they are beloved in the gay community.

I ask Pasión Kristal if it hurts to hear gay slurs thrown at him during fights.

"There's always some idiot in the crowd who yells mean things, and it doesn't feel good," he says. "But it's the minority."

And, he adds, at the end of the day, in lucha libre, if the crowd isn't yelling at you, you're doing something wrong.