Accessibility links
'We Are Next': Greek Jews Fear Rise Of Far-Right Party : Parallels Jews have lived in Greece since the time of Alexander the Great; the overwhelming majority of the community died during the Nazi occupation. Now, 70 years later, the community — and Greece — is confronting the rise of the Golden Dawn Party, a group that espouses neo-Nazi ideology. 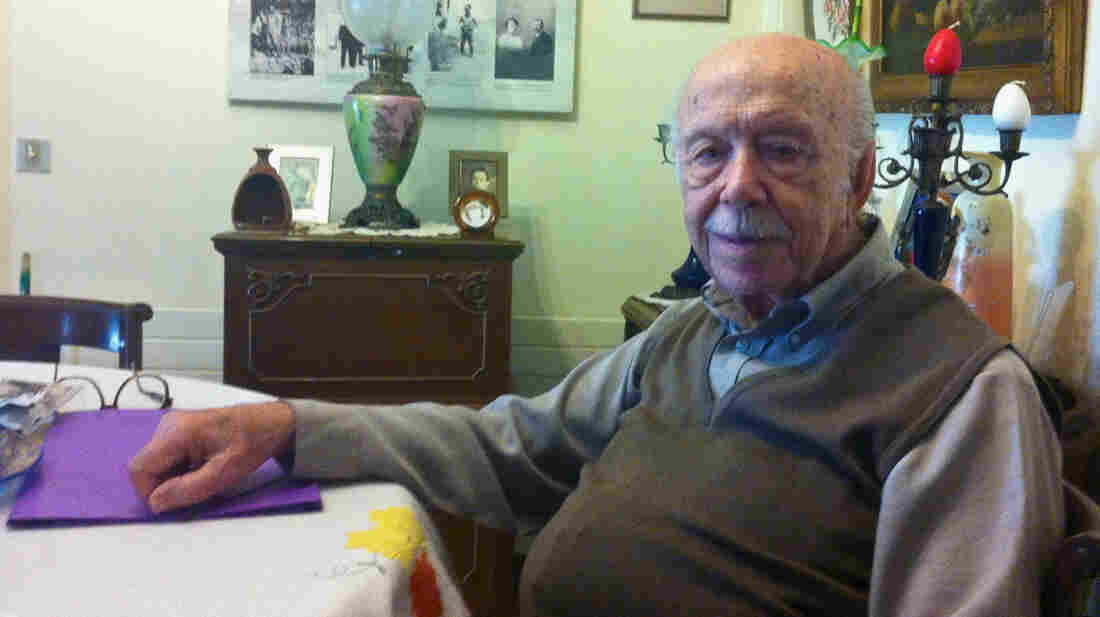 Mois Yussuroum, a 94-year-old retired dentist, fought the Nazis as part of the Greek resistance during World War II. "Of the 650 Greek Jews who fought in the resistance, I'm the only one still alive," he says. Joanna Kakissis/NPR hide caption 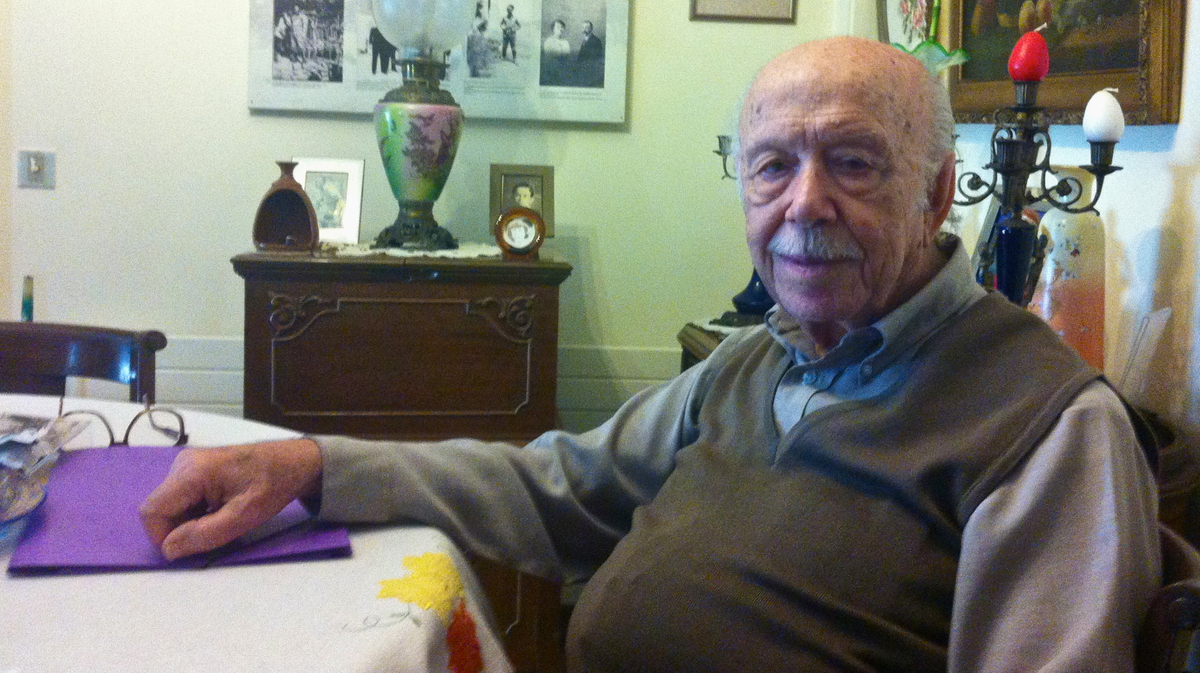 Mois Yussuroum, a 94-year-old retired dentist, fought the Nazis as part of the Greek resistance during World War II. "Of the 650 Greek Jews who fought in the resistance, I'm the only one still alive," he says.

No one has ever doubted Mois Yussuroum's patriotism. As part of the Greek resistance during World War II, he fought Benito Mussolini's fascist army and then the Nazis.

"The other resistance fighters didn't know I was Jewish," he says, since he used the name "Yiorgos Gazis" in case he was captured. "But my superiors did know, and they gave me many responsibilities, including making me a garrison commander."

Now, more than 70 years after Yussuroum and other Greeks fought the German Nazis, Greece confronts the rise of the Golden Dawn Party, which espouses a far-right ideology. Its members use Nazi symbolism and slogans and blame "Jewish bankers" for the country's debt crisis. They say they're patriots, not fascists, a claim that makes Yussuroum, a retired dentist who's now 94, cringe.

"Their minds are sick," he says. "They say the Holocaust is a lie, and they don't believe the Germans killed Jews." 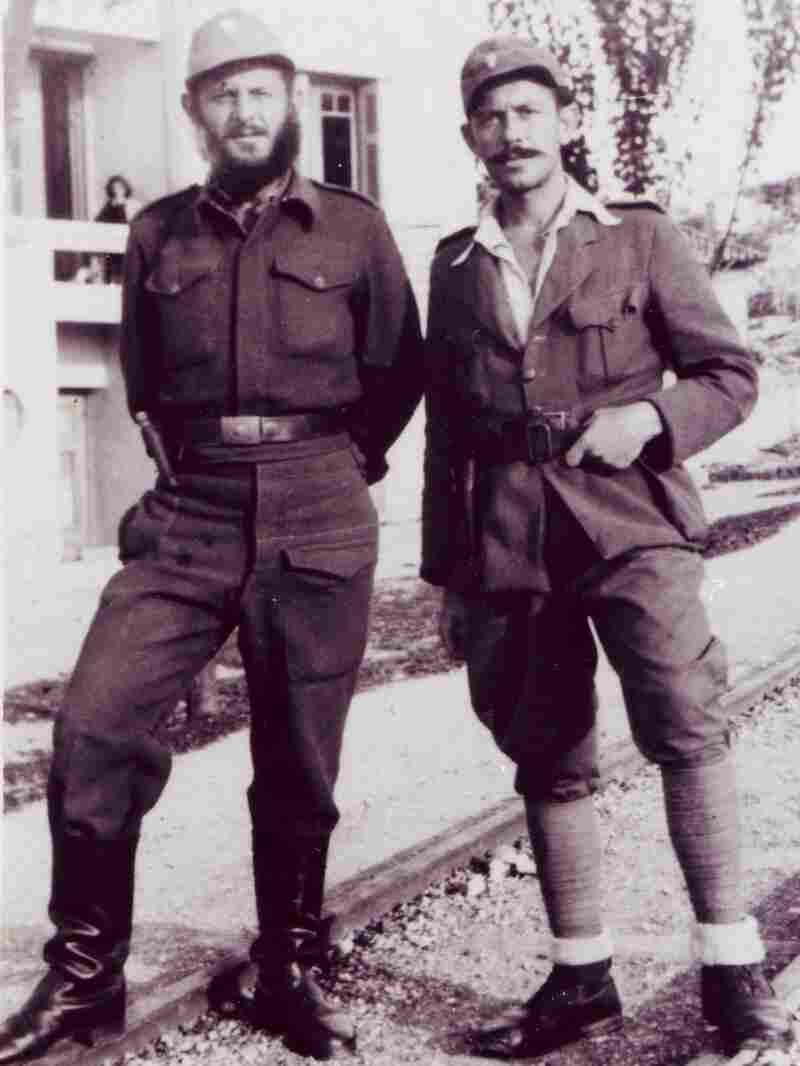 Yussuroum (right) with a fellow Greek soldier fighting the Nazis during World War II. He used the Christian name "Yiorgos Gazis" in case the Nazis captured him. Courtesy of Jewish Museum of Greece hide caption 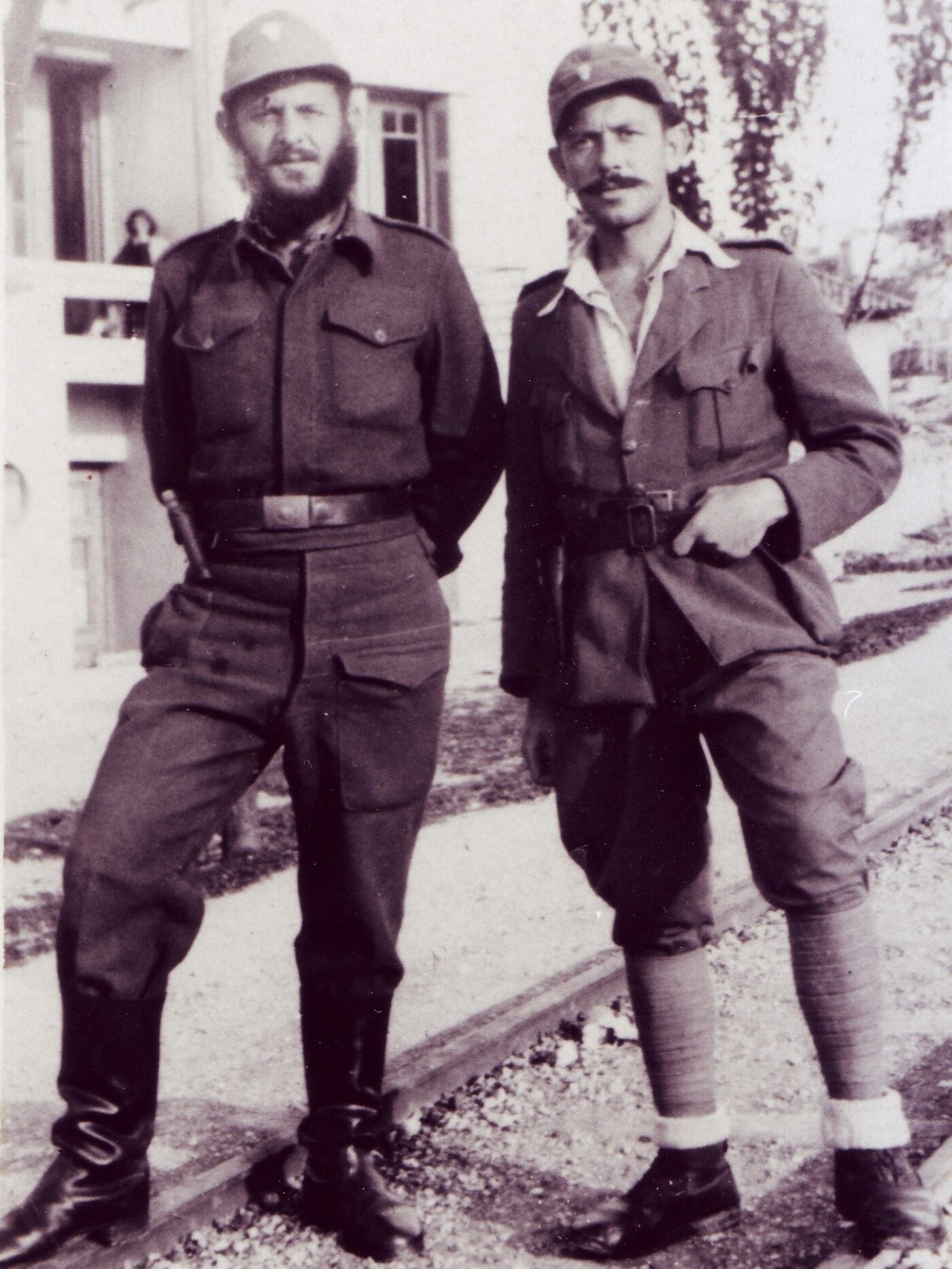 Yussuroum (right) with a fellow Greek soldier fighting the Nazis during World War II. He used the Christian name "Yiorgos Gazis" in case the Nazis captured him.

Courtesy of Jewish Museum of Greece

The propaganda is spreading, says Zanet Battinou, director of the Jewish Museum of Greece in Athens.

"It is heard, it is read, it is written," she says. "So many more people hear this and read this, and are maybe wondering about it. What we are here to do is offer accurate information, which has been double-checked and historically substantiated."

The museum is running a special exhibit, Synagonistis (Comrade-in-Arms), on the 650 Greek Jews who fought in their country's anti-Nazi resistance.

Jews have lived in Greece since the time of Alexander the Great. Before the war, most were Sephardim, descended from the Jews whom Spain expelled in the late 15th century. They lived in the northern city of Thessaloniki and became the city's most successful merchants, says Erika Perahia-Zemour, curator of the Jewish Museum of Thessaloniki.

Until the 1930s, they spoke Ladino, or Judeo-Spanish, at home.

"It was very easy to recognize a Jew," Perahia-Zemour says. "Only young Jews spoke Greek, and the Greek they spoke kept a small accent."

Their accents gave them away to the Nazis, who deported them to die in concentration camps.

Some Greek-Jewish children survived by hiding in the homes of Greek Christians.

Rosina Asser-Pardo, a native of Thessaloniki, was a third-grader in pigtails when she hid with her family.

In the recent documentary Kisses to the Children, by Greek filmmaker Vassilis Loules, Asser-Pardo recalls emerging after 548 days and discovering Thessaloniki had become a city of ghosts.

"They counted us and there were only 70 Jews left, from a community of 55,000 people," she says, her voice breaking. "And there was this enormous feeling of loneliness."

The 1,500 Greek Jews who remain in Thessaloniki keep their traditions alive. The community's choir sings in Ladino, which parents stopped speaking to their children after the war.

But in Athens on July 24, another song was heard — a Greek version of a Horst Wessel song, a Nazi anthem. The Golden Dawn Party blasted it outside its headquarters while handing out free food to "Greeks only." Golden Dawn says it wants to "clean" Greece of foreigners. Its black-shirted supporters attack poor South Asian and African migrants, claiming they're all in Greece illegally.

The violence scares Orietta Treveza, a Greek-Jewish educator who has three young daughters.

"It's very scary because we think that we are next," she says. "It's not going to end with the immigrants." 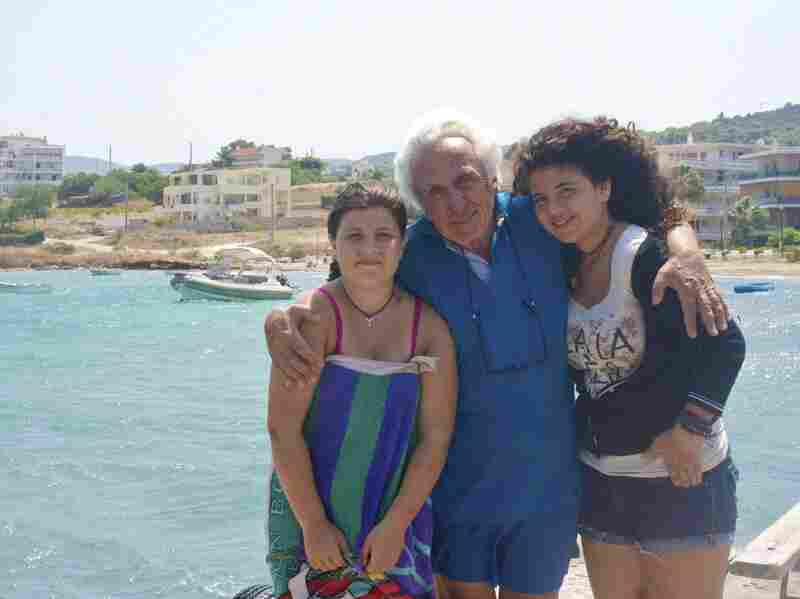 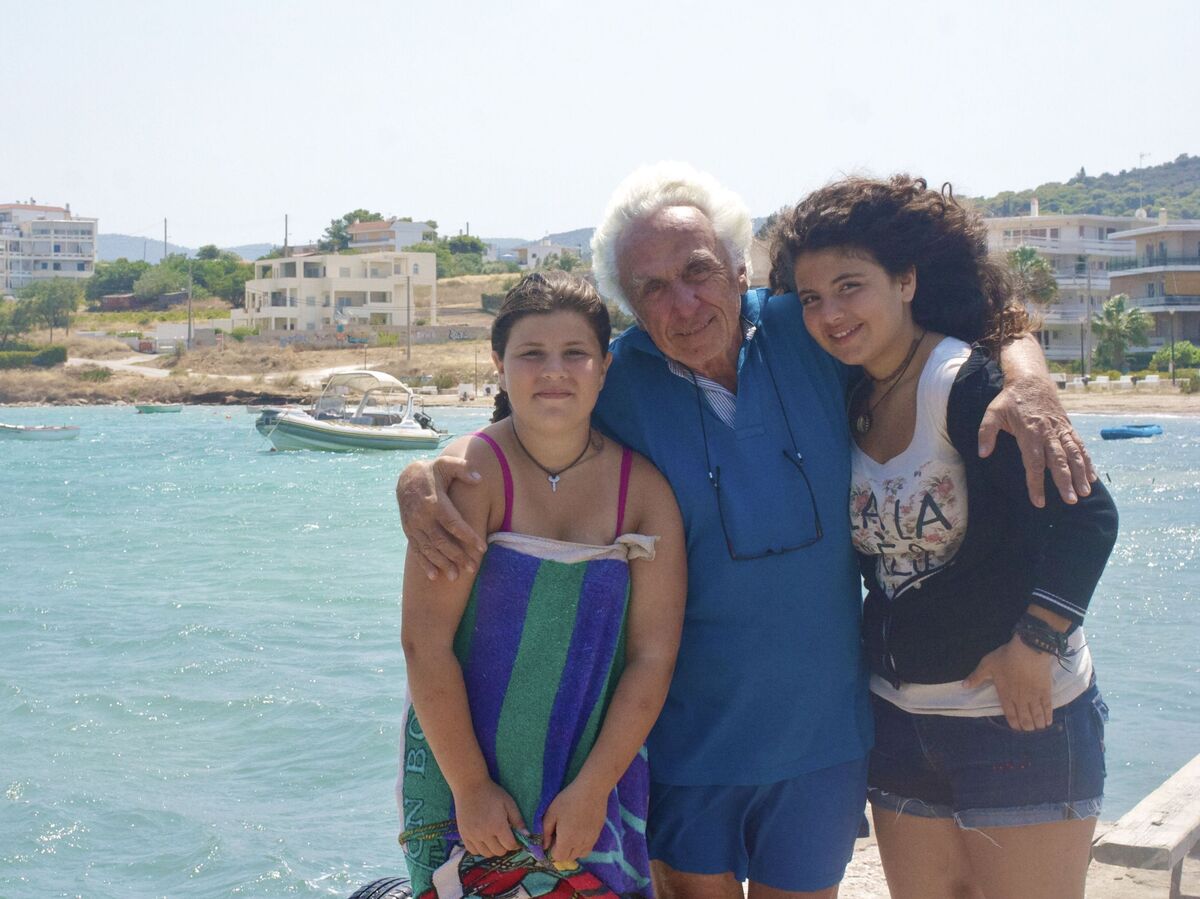 He cites a recent documentary that aired on Britain's Channel 4 that showed a Golden Dawn parliamentary candidate joking about turning immigrants into soap.

Sousis, a retired businessman, is descended from Romaniote Jews who have lived in Greece for more than 2,000 years. He was hidden during the war. His father is thought to have died at Auschwitz.

Sousis lives outside Athens, near the sea. He's spending the summer navigating his ancient rowboat with his granddaughters, Annita and Linda Sousis.

Annita, who's 14, loves to sing ballads and wants to be a music teacher. But, like other young people, she worries that the post-austerity Greek economy will just keep sinking.

"All the kids at school worry about the future," she says. "One of my classmates lives in an orphanage because he comes from a big family that's poor and can't support all eight children. But he has big dreams. We all do."

Her parents talk about moving to Israel, where other Greek Jews have relocated recently to work. But she wants to stay in her homeland.

"I am so attached to this land, and I wouldn't want to go anywhere else, for any reason," she says. "I want to do whatever I can to save my country."