Accessibility links
Lessons From Libya On How To Destroy Chemical Weapons : Parallels Libyan dictator Moammar Gadhafi renounced his country's chemical weapons program in 2003, but it has yet to be fully dismantled. That episode offers a number of lessons as the fate of the Syrian program is under debate.

Lessons From Libya On How To Destroy Chemical Weapons

Lessons From Libya On How To Destroy Chemical Weapons 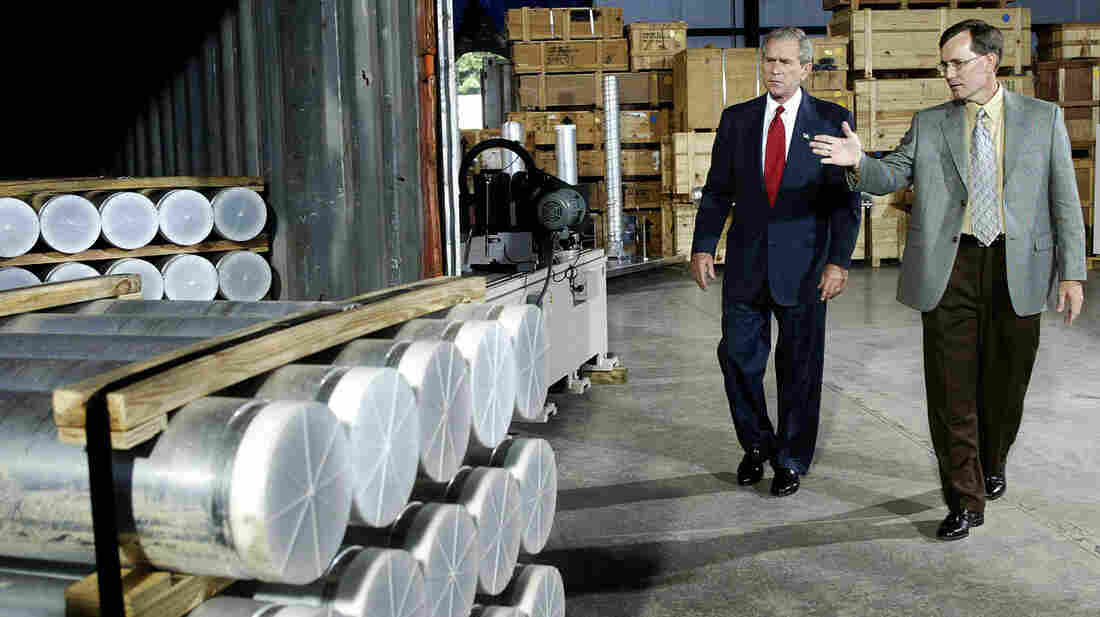 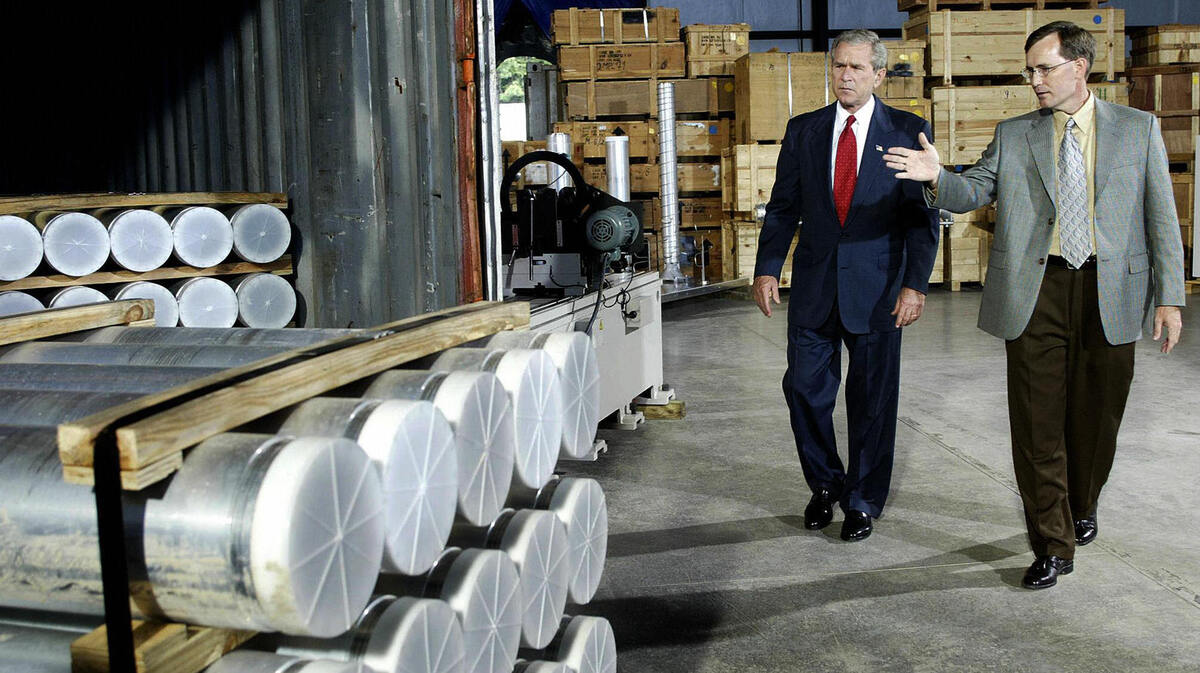 President George W. Bush receives a tour of nuclear material surrendered by Libya and flown to the Oak Ridge National Laboratory, a U.S. facility in Oak Ridge, Tenn., in 2004.

When the U.S. invaded Iraq in 2003, one of the broader goals was to send a strong deterrent message to other dictators who might have weapons of mass destruction (even if Iraqi dictator Saddam Hussein didn't).

Apparently fearing he might be next on the U.S. list of doomed dictators, Gadhafi stepped forward in December 2003 and announced he was giving up the country's substantial stocks of chemical weapons. He also agreed to disband a nuclear program that was still at a relatively modest level.

U.N. teams were sent in and dismantled Libyan facilities on-site. Components from the nuclear plants were flown to a U.S. nuclear facility in Oak Ridge, Tenn., and destroyed there.

This entire operation received limited attention at the time and was overshadowed by the wars in Iraq and Afghanistan. But it has suddenly become relevant given Syria's apparent willingness to relinquish chemical weapons that it never explicitly acknowledged having in the past.

It Isn't Quick Or Easy

Lesson No. 1 is that dismantling a chemical weapons program is a laborious process, even when a country like Libya is cooperating and is at peace, as Libya was at the time.

After years of work, the Libyan arsenal was still being taken apart when an uprising against Gadhafi broke out in early 2011. This forced the U.N. inspection unit, the Organization for the Prohibition of Chemical Weapons, to suspend its efforts.

In November 2011, shortly after Gadhafi was ousted and killed, the interim government that replaced him announced it had found a "previously undeclared chemical weapons stockpile" that included several hundred munitions loaded with mustard gas, Foreign Policy reported.

"The destruction of those weapons was halted because of a technical malfunction at the disposal facility and is still not complete. Nine years after vowing to get rid of its weapons, Libya has destroyed barely half of its total mustard gas stockpile and just 40 percent of its stores of chemical weapons precursor elements," Foreign Policy noted.

After Gadhafi gave up his weapons, he was rewarded with better relations with the West. However, he felt he received far less than he was promised, and he was ultimately ousted in a NATO bombing campaign that greatly helped the rebels fighting him.

Reviewing Gadhafi's experience, dictators may see it as a reason to cling to, rather than give up, weapons of mass destruction.

Syria's chemical weapons program would likely be even harder to take apart than Libya's. Syria is embroiled in civil war, its stockpile is believed to be much larger than Libya's, and its production and storage facilities are believed to be scattered among dozens of sites around the country.

"The known sites are actually in zones of conflict where the battle lines are changing literally on a day-to-day basis," Amy Smithson, a chemical weapons expert at the Monterey Institute of International Studies, told Morning Edition.

The Pentagon has estimated that it would take 75,000 U.S. troops in Syria to take full control of the country's chemical weapons. By comparison, the U.S. has 60,000 troops in all of Afghanistan. And President Obama, in his speech to the nation on Tuesday evening, reiterated he will not send American ground troops into Syria.

"None of this is mission impossible. But it is certainly not easy. It isn't quick, and it requires a lot of transparency and cooperation," Anthony Cordesman, a defense analyst at the Center for Strategic and International Studies, told Morning Edition.

Syria has one of the world's largest chemical weapons arsenals, which includes traditional chemical agents, such as mustard gas, and more modern agents, such as sarin, and persistent nerve agents, such as VX, according to the International Center for Counter-Terrorism, which is based in Israel.

"Syria has accumulated since the 1980s a stockpile of approximately 1,000 tons of chemical weapons, stored in some 50 different cities, mostly located in the northern part of the country close to the Turkish border," the group added in a report released this week.

This has set off alarm bells, raising worries that the Syrian government could lose control of the arsenal. However, the center noted that it would probably be difficult for non-experts to use the Syrian weapons. Most of Syria's chemical weapons are "stored as two separate ingredients that must be combined before lethal use, making it hard for its detonation by non-professional elements."

Until recently, Syria had never acknowledged possessing chemical weapons. Syria now admits having them, yet denies using them. The U.S. and others say Syrian government forces have unleashed the weapons on multiple occasions, including an Aug. 21 attack near Damascus that killed more than 1,400 people.

U.N. weapons inspectors happened to be in Syria on Aug. 21 to investigate reports of chemical weapons attacks months earlier. When the inspectors asked to visit the sites near Damascus, the Assad government resisted for four days before granting permission.

The historic secrecy surrounding the program raises doubts about how forthcoming Syria might be if the United Nations were to ask for a full accounting of its chemical weapons program, as Russia, Syria's ally, has proposed.

"There are a lot of complications in this proposal," said Smithson of the Monterey Institute. "Assad has not told the truth about his chemical arsenal. He has already interfered with inspections. So to assume the declaration that the Assad government would be making is going to be accurate is really to take a leap of faith."