Accessibility links
Brazilian Believers Of Hidden Religion Step Out Of Shadows : Parallels Candomblé, an Afro-Brazilian religion, has been widely practiced by people of African descent in Brazil but mostly in secret — until now. After centuries of slavery and discrimination, Brazil's Afro-Brazilian community is proudly celebrating its African roots.

Amid chanting and drumming, a crowd gathers in Sao Paulo and waits for the gods to come to them from the spirit world.

They are celebrating a sacred festival day in honor of Omulu, a deity of life and death. The women wear white dresses with crinolines, colorful belts and headdresses. The men wear lace, pajama-style suits. They sing and dance in a circle for hours; the room gets warmer, the chanting more intense.

Suddenly, they are here: Orixas have possessed the chosen among the faithful. They are spirit gods, the deified ancestors who link humans to the other world.

Those who have been taken over writhe and shout. They are led away and then return dressed in beautiful sparkling costumes depicting the aspect of the deity that possesses them — Omulu, for example, or the snake god Oshunmare.

They are believers in Candomblé, a religion that came to Brazil on the slave ships from of West Africa centuries ago. 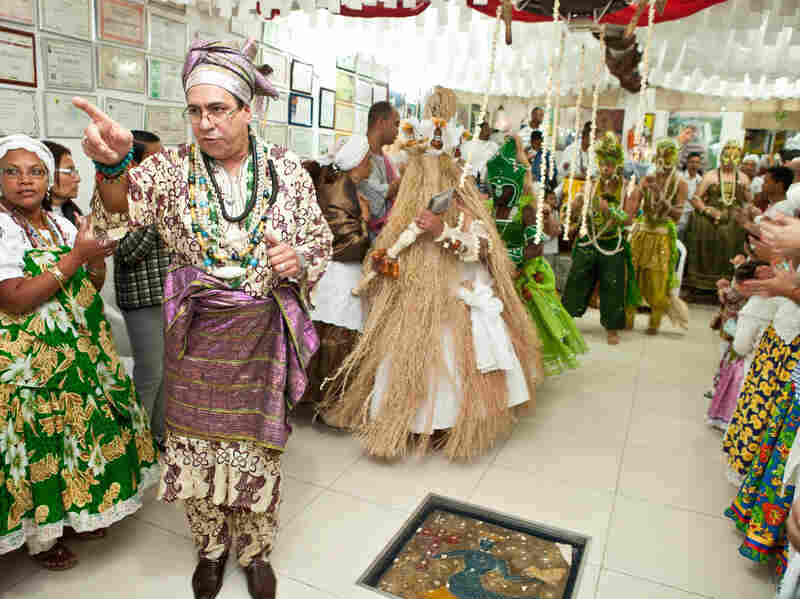 Candomblé priest Pai Nelson guides people who are possessed by orixas, or spirits of deities, back to a Sao Paulo temple, after they changed into orixa costumes. Marcello Vitorino/Fullpress for NPR hide caption 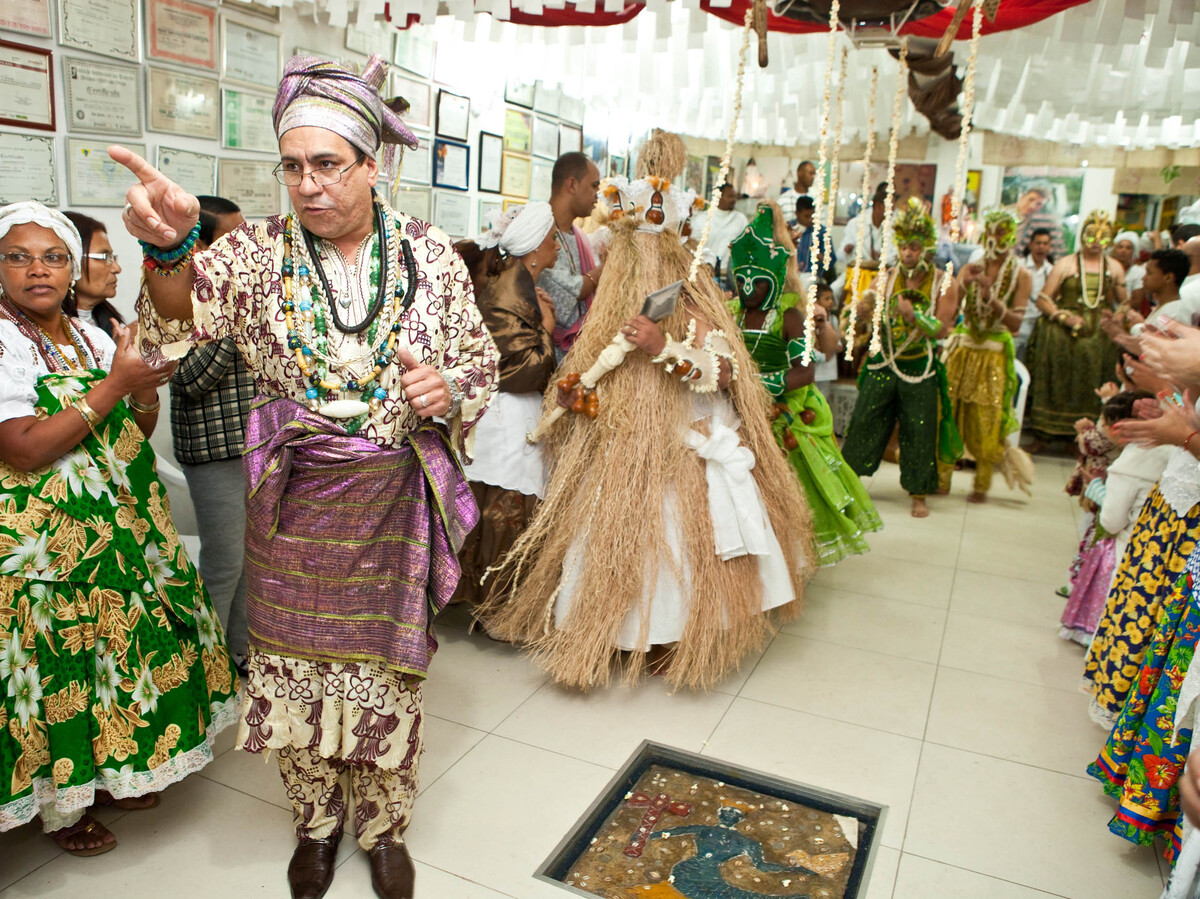 Candomblé priest Pai Nelson guides people who are possessed by orixas, or spirits of deities, back to a Sao Paulo temple, after they changed into orixa costumes.

Brazil has one of the largest black African populations in the world, second only to Nigeria. More than half of Brazilians define themselves as black or mixed-race. But these numbers have not translated into power — be it social, economic, political or religious.

Now, though, a recent religious poll has shown a sharp uptick in people self-identifying as followers of Afro-Brazilian religions like Candomblé.

Followers believe in one all-powerful god who is served by lesser deities. Individual initiates have their personal guiding deity, who acts as an inspiration and protector. There is no concept of good or evil, only individual destiny.

Pai (or "Father") Nelson is the priest of the house of worship where the ceremony is taking place. He says today's ritual is one of purification. People ask for health, and the deities grant it from one of the four elements of the earth.

"Candomblé was once very hidden, very isolated," he says. "Candomblé wasn't accepted here. People always had a preconception about it because it was African — black people aren't accepted in society here. We do animal sacrifice. Our religion is very different than any other. People didn't understand it."

But there has been a recent push to change that. Sitting among the faithful here is Marcilio Costa, who is the commercial officer at a foreign consulate in Sao Paulo. He became an initiate a year and a half ago, and he says he's open about it.

"Among Brazilians, yes. People understand better now. ... All my friends know my religion, every single one of them," Costa says. "I don't hide from no one."

In her office at the University of Rio's Afro-Brazilian Studies Department, Ana Paula Alvez Ribeiro listens to the group Meta Meta, which uses the rhythms and language of Candomblé in its music.

She explains that for some time now, the many Afro-Brazilian religions here have influenced Brazilian musicians and artists. But it's only in the past few years that adherents of Candomblé have made a push to be more widely recognized in other forums.

"In the census of 2010, there was a big movement within Canmblé called, 'He who is, say that he is' — meaning those who practice Candomblé should give that as their religion in the census," Alvez says.

Candomblé — like its cousin Santeria practiced in Cuba — is a synchretic religion, meaning that many of the orixas are also represented by Catholic saints and it has absorbed many Catholic practices. 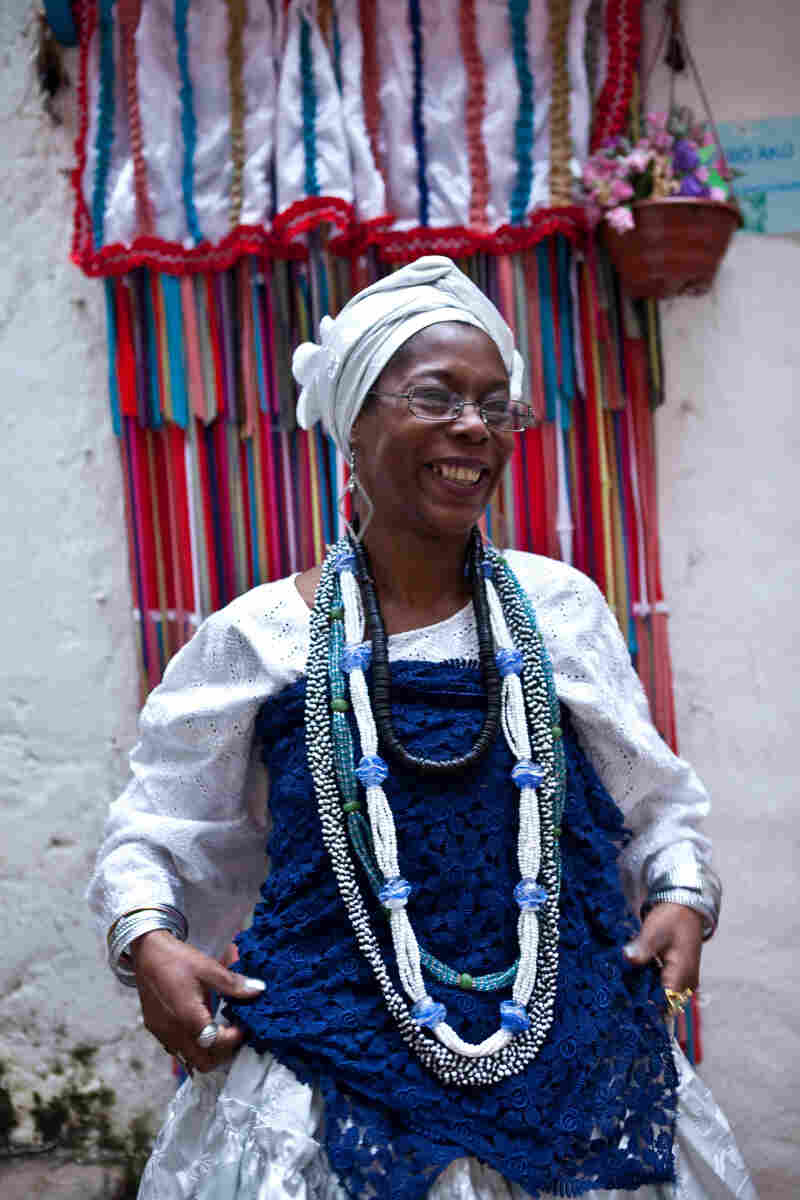 A Candomblé practitioner gets ready for the party outside the temple. Marcello Vitorino/Fullpress for NPR hide caption 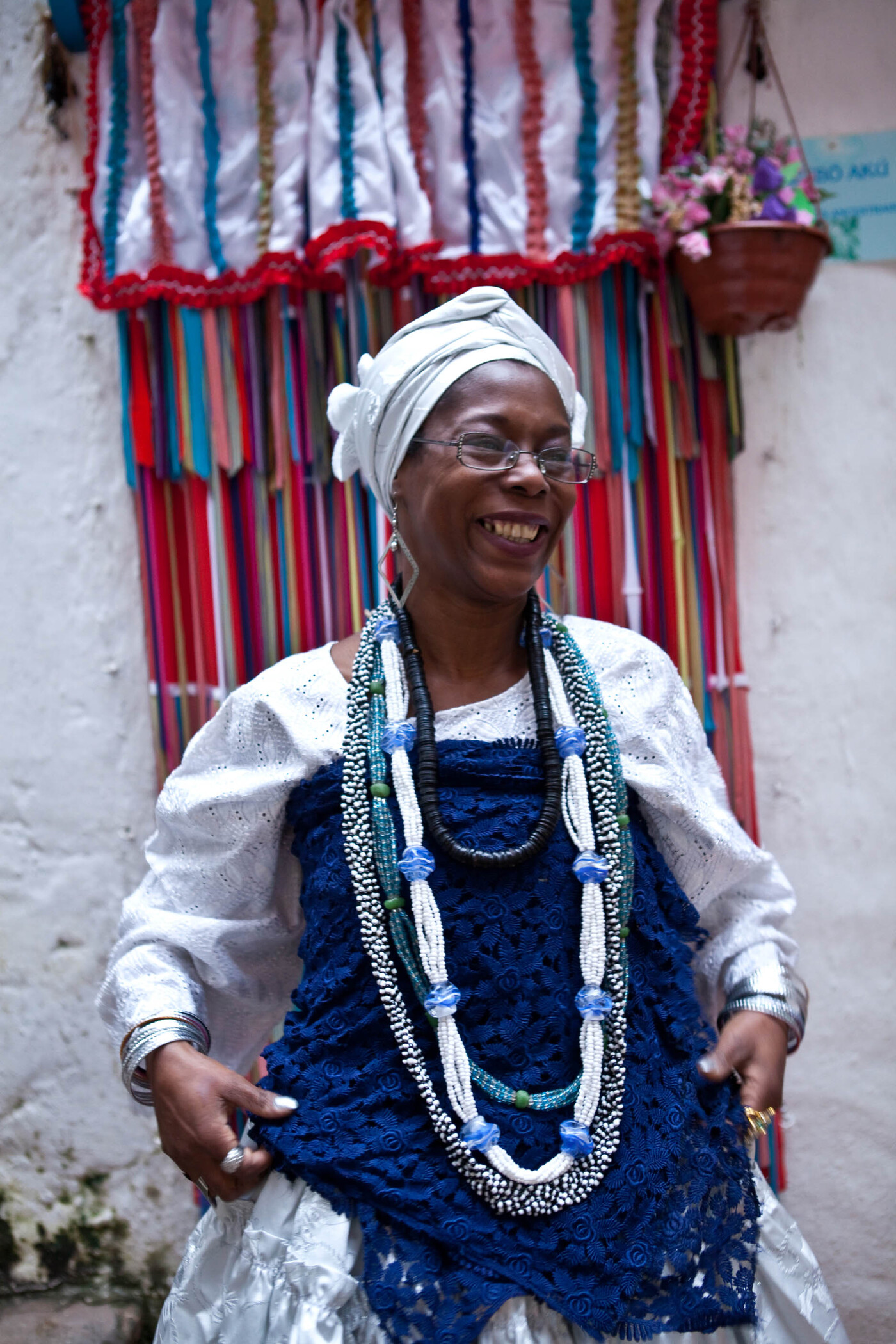 A Candomblé practitioner gets ready for the party outside the temple.

So for much of its hidden history in Brazil, Candomblé practitioners would tell the government they were Catholics, when they weren't. It was a way of protecting themselves from persecution.

But after the fall of the military dictatorship three decades ago, Afro-Brazilian activist groups saw that instead of cowering in the shadows, Afro-Brazilian culture had to be put front and center.

"So the Afro-Brazilian religions start to organize to fight for their rights and against religious intolerance," says Alvez. "In the new millennium, you start to see African religions holding their festivals out in the open on the streets, not hidden in the basements."

But it's a battle for recognition on many fronts. And there is a new challenge — the rise of evangelical Christianity. Almost one-quarter of Brazilians say they identify as evangelical.

Afro-Brazilian religious followers are still a tiny fraction of the population, at less than 5 percent.

On a recent day, Marcelo Monteiro sits in an open air tejero — or Candomblé church — in Rio, surrounded by palm trees and buzzing insects. Shrines to the various deities dot the area.

He sings a West African Yoruba folk song about how no religion will stop them from practicing their faith. It's become a kind of battle cry, he says. Monteiro is a Candomblé priest who has started the first Candomblé political party, known as PPLE, or Party for the Freedom of Expression.

"With the growth of the Pentecostal religions and their dominance in the halls of political power within Congress, we felt obligated to start our own political group," he says.

Monteiro complains that much of the status Candomblé had gained is being lost again since evangelical Christianity swept Brazil. Evangelical groups have attacked Afro-Brazilian shrines, and some of the evangelical churches call Candomblé "devil worship."

"Their aim is to make Brazil a Christian country, and their legislative agenda is skewed to limit the cultural and religious traditions of [our] African roots," Monteiro says. "So we must unite politically so that we can defend ourselves."

There is another reason Monteiro thinks it's vital to have a Candomblé party in Congress. Even though people of African descent make up more than half of Brazil's population, they account for only 8 percent of the lower house of Congress, while only two out of 81 senators are black.

The party is struggling, though. It lacks money and is looking for international backers. They have only managed to collect half the signatures needed to allow them to field candidates in the upcoming national elections in 2014.

Jana Guinond, a black activist and Candomblé practitioner in Rio, says the legacy of slavery can still be felt in Brazil — the last country to give up the practice in the region.

She says the fight for equality is ongoing, and protecting Afro-Brazilian religious heritage is part of that.

"It's important to highlight the huge importance of the black movements in pushing for the appreciation of diversity or religious plurality," Guinond says. "Many people would like to get rid of the black population in Brazil and their beliefs, but we won't allow that."

Back in Sao Paulo, it's wedding day at a Candomblé house of worship. The bride and groom are led into the hall while family and well-wishers look on.

As part of their push for legitimacy, the first legally binding weddings and baptisms are being presided over by Candomblé priests.

"We have the right granted by the constitution. If we are recognized as a religion we have to function like one," Leonardo says. "To be respected we have to operate in public, to lose the fear we have had since slavery."

"Our religion is beautiful," he says. "Up until now, we haven't existed in the eyes of the world. We need society, the government and the people here to recognize that we do exist and that we can take our place side by side with the other religions."