Accessibility links
With A Card Game, The Portuguese Get Back At Their Creditors : Parallels Here Comes the Troika is a satirical card game where players can stash away savings in Swiss bank accounts or fund useless airports or high-speed trains to nowhere. The winner is the one who can hide the most money in offshore accounts, win elections — and avoid the dreaded troika card. 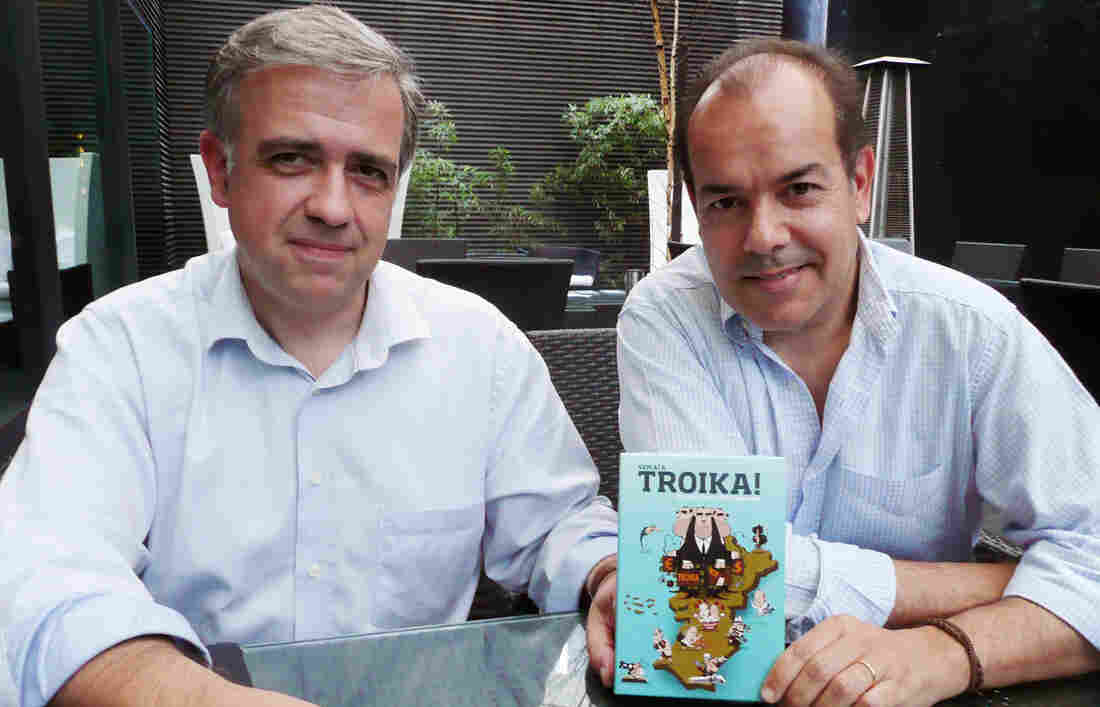 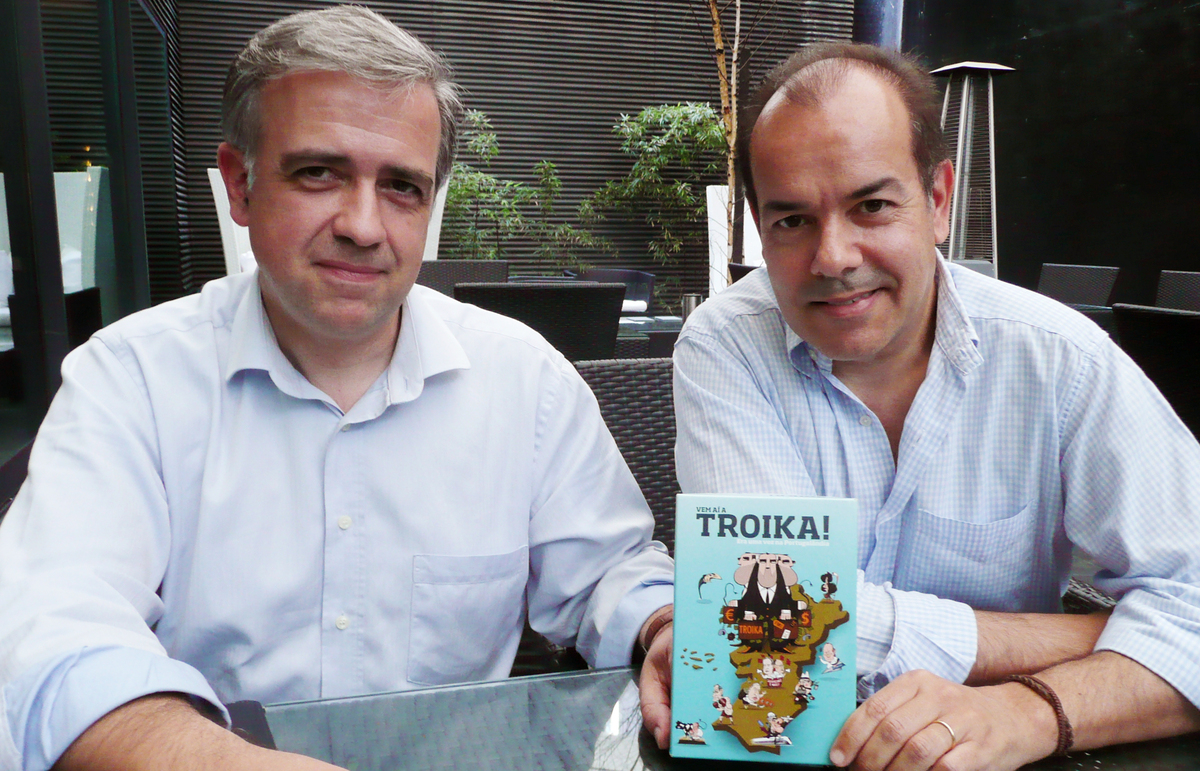 In a typical cafe in downtown Lisbon, old men play cards or dominoes over cups of milky coffee or cold glasses of vinho verde and commiserate about the economy.

One of their favorite ways to do this is through a new card game that's all the rage in Lisbon these days. Vem Aí a Troika, or Here Comes the Troika, is a satirical cross between Monopoly and Old Maid, in which players try to stash away savings in offshore accounts, win elections — and avoid the dreaded troika card.

The game is based on Portugal's painful experience with the troika — the European Union, European Central Bank and International Monetary Fund — which rescued Portugal's failing economy with more than $100 billion in bailout loans two years ago.

Inspectors from Portugal's creditors arrive back in Lisbon on Monday to assess the country's progress — which doesn't look all that good.

The Portuguese economy is still shrinking, and the government has indicated it may not fulfill its deficit goals. In order to try to pay back its bailout loans, Lisbon hiked taxes. The tax burden for some Portuguese has doubled. Unemployment is pushing a record 17 percent. Poverty is on the rise.

And so is opposition to the troika.

"Basically, the troika card ends the game," says Carlos Mesquita, a 49-year-old engineer who invented the game with some friends late last year. "You don't necessarily lose [when the troika card is played, but] it's a way to finish the game. And then you just count your points to see who won."

The action takes place in the barely fictionalized country of Portugalandia. Each of the more than 100 cards in the deck is decorated with intricate caricatures of figures that closely resemble real-life Portuguese politicians and power brokers.

"Well, we have fewer lawsuits here than you have in the U.S.," Mesquita jokes. "We're protected from libel because we're depicting a fictionalized country, with characters that bear some resemblance to real people."

The game does require a certain level of education to understand its puns and satire. 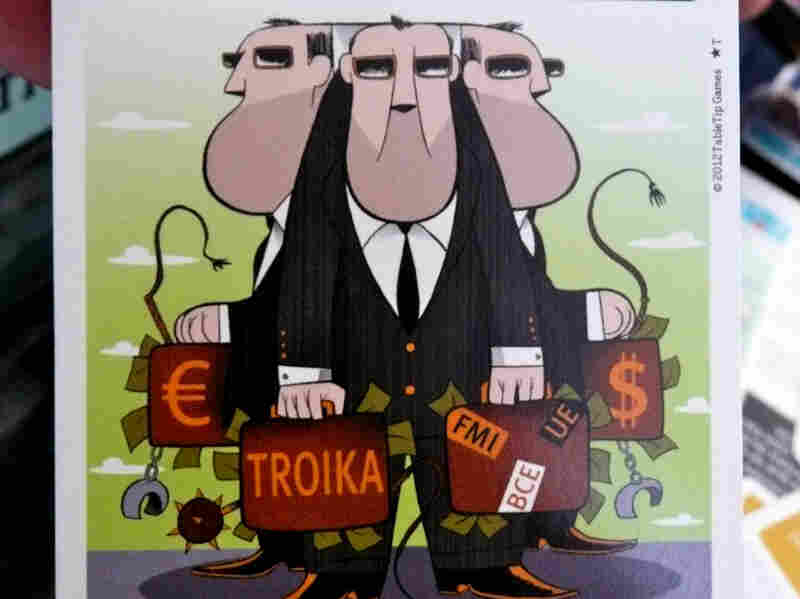 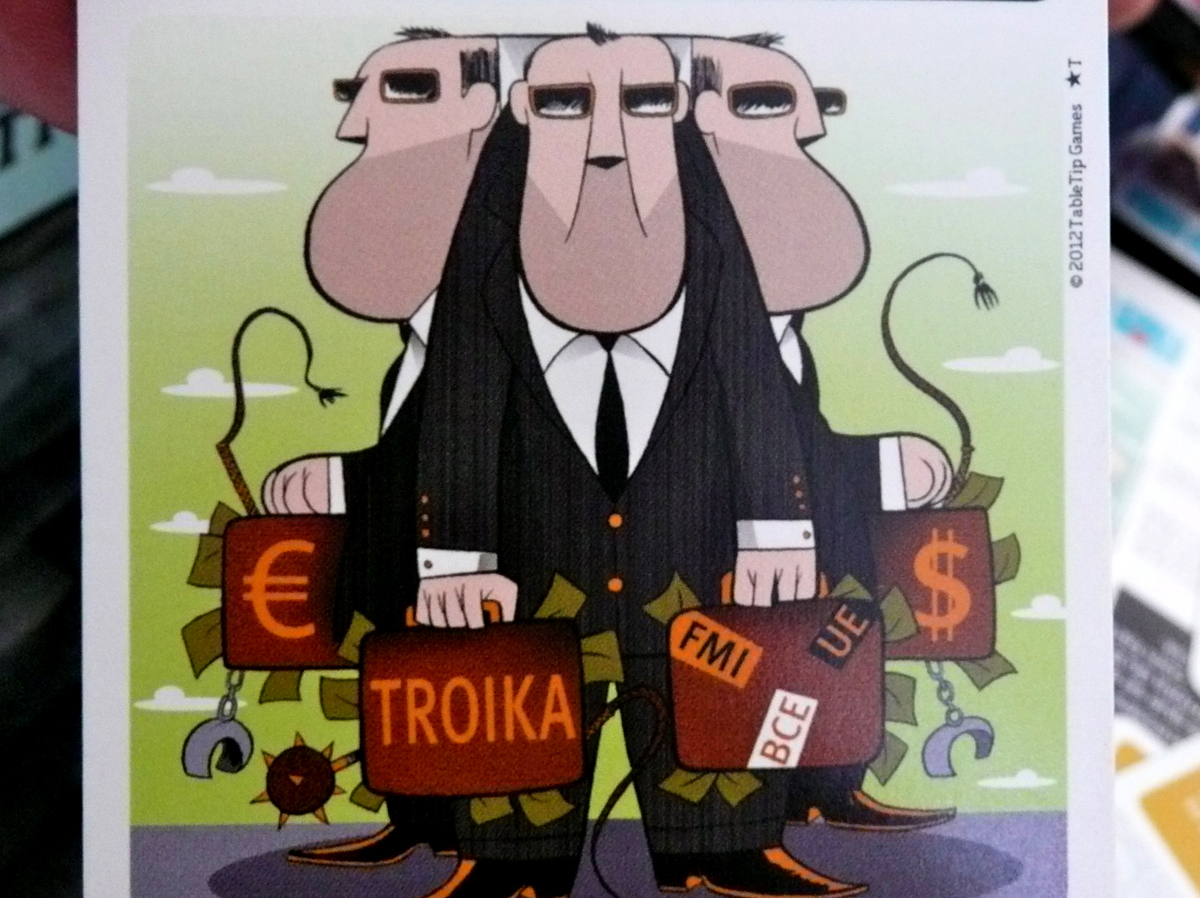 The dreaded troika card, decorated with a caricature representing the European Union, European Central Bank and International Monetary Fund. In Vem aí a Troika, the game ends when the troika card is played.

"You've got to have at least some political education to play," Mesquita says. "Or at least, you must read the newspapers."

The popularity of this card game is one example of an explosion of creative arts in Portugal, despite its poor economy — or perhaps because of it.

Citizens unhappy with budget cuts routinely stage angry and sometimes violent demonstrations in the streets of Athens or Madrid. Portugal's opposition to austerity has been quieter, but creative, says economist Joao Ferreira do Amaral, who teaches at the Technical University of Lisbon.

"It's positive that, at least for the time being, people are being more creative — and perhaps more effective in their criticism," says Ferreira do Amaral, author of the best-selling Portuguese book Why We Should Leave the Euro, in which he argues that Portugal should quit the European shared currency.

Troika-themed graffiti has spread through Lisbon. A famous opera singer has joined Portugal's anti-austerity movement, promoting music as a tool for nonviolent protest.

Among those Mesquita teamed up with to invent his troika card game are a former math professor, a graphic designer and a marketing student, who consider themselves hard-core gamers — cards and board games, of course.

The group saw a market for a game that would satirize the current political and economic climate in Portugal, offering players a way to use humor and creativity to deal with their depression about current affairs.

"For some time, I thought about the power struggles that you have in any society. Usually it involves people, power, money, votes," Mesquita says. "So that's it! We decided we would try to develop [our game] from there."

The inventors used online crowdfunding to raise about $13,000 initially. That funded the first 3,000 decks of cards, which sold out in four weeks. A new edition debuts on store shelves in Portugal this week, timed with the arrival of troika inspectors in Lisbon.

In the deck of cards, the single troika card shows a caricature of inspectors from the European Union, European Central Bank and IMF —middle-aged white guys in black suits, carrying briefcases.

"In a way, they're the guys that bring the money, but also bring the torture," Mesquita says, referring to strict austerity measures — tax hikes and spending cuts — mandated by the troika.

Preto believes that Vem Aí a Troika can be cathartic for players — a way to get them talking about why their economy collapsed and what changes might be necessary.

"You can play with serious things," he says. "But it happens that by playing and by thinking with humor, you can really make people reflect about the problems, and maybe — why not? — act differently the next day."