Accessibility links
Germany's Refugee Policy Tested By New Arrivals : Parallels As many as 5,000 Syrian refugees are moving to Germany this month, but they aren't receiving the warmest welcome in a country where a growing number of Germans are unhappy about the steady stream of asylum seekers. Fanning the flames are extremists, who want Germany to close its doors to refugees. 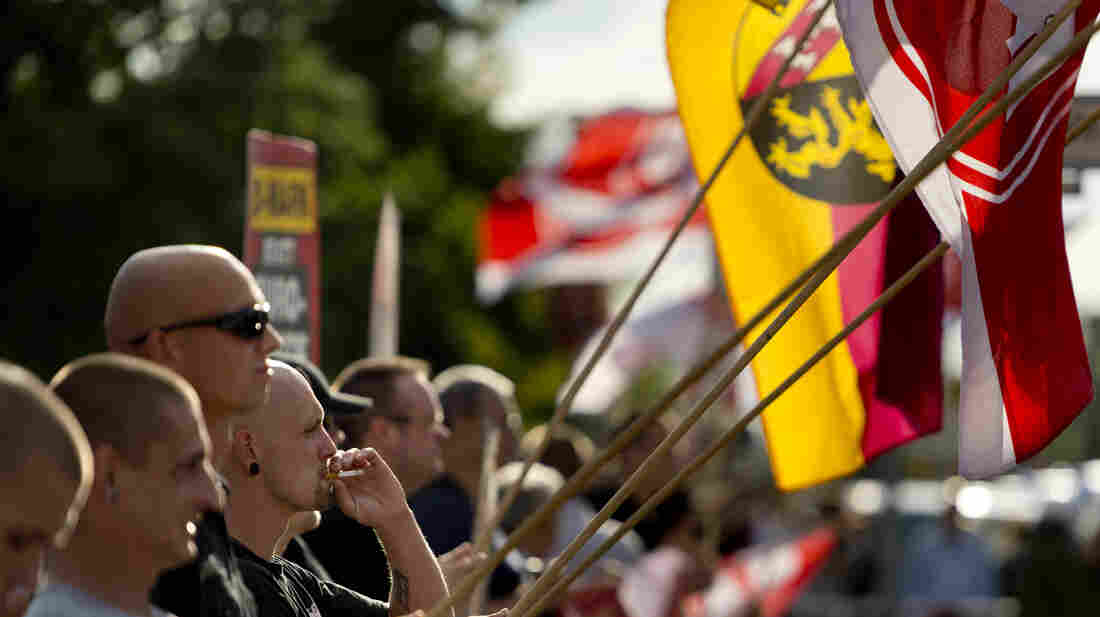 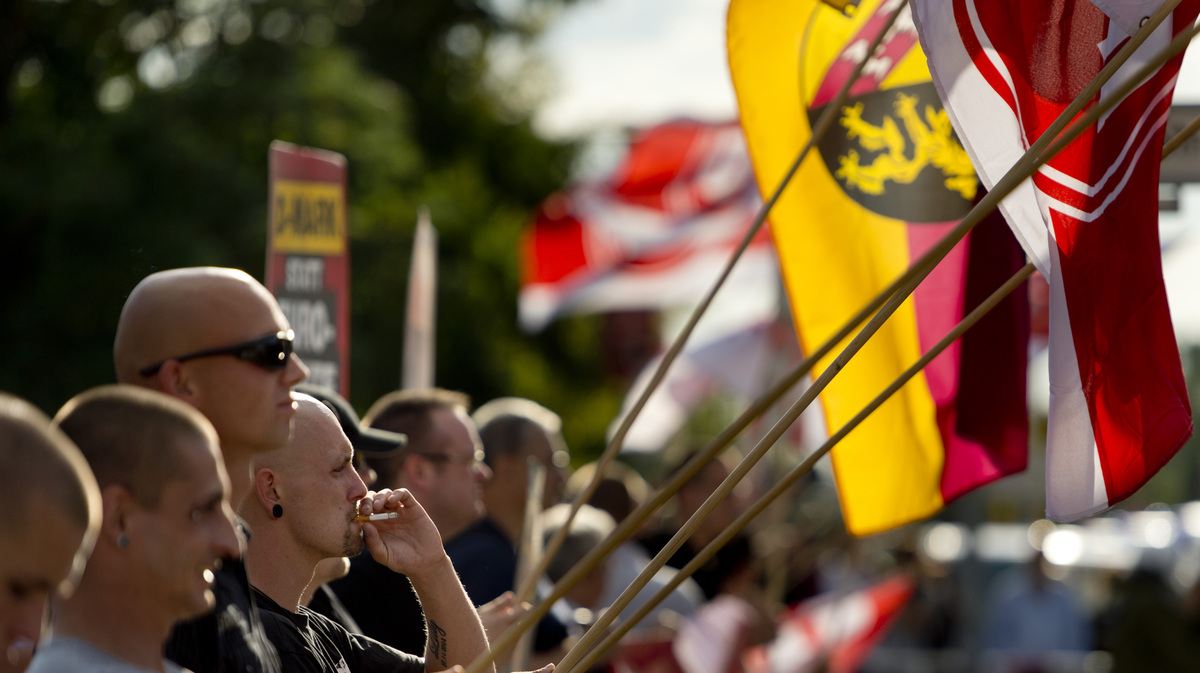 NPD Party activists hold up German flags in the Hellersdorf-Marzahn district of Berlin last month, as they protest a new home for asylum seekers.

As many as 5,000 Syrian refugees are moving to Germany this month after Chancellor Angela Merkel's government agreed to a U.N. request to host them. But they aren't receiving the warmest welcome in a country where a growing number of Germans are unhappy about the steady stream of asylum seekers. Fanning the flames are right wing extremists, who want Germany to close its doors to refugees.

Among their targets is Hellersdorf, a working class neighborhood on the outskirts of Berlin. The city government has placed refugees from war-torn countries in an abandoned high school there — a move that had led to multiple demonstrations, both for and against the refugees.

Many Hellersdorf residents say they opposed the protests, which were largely staged by out-of-towners, but they aren't happy their community is forced to host refugees from Syria, Afghanistan and other countries, either. The blue-collar neighborhood filled with Soviet-era apartment blocks lacks the ethnic diversity seen in much of Berlin. It is also short on services and schools. City planners who spent billions of dollars renovating other parts of the German capital have largely ignored this community.

"We don't know these people; they come from another country," says 25-year-old resident Enrico Kieser. "I wasn't worried so much about them raising the crime rate, but large numbers of them moving in could cause problems."

Another 22-year-old resident who would only give her first name, Nikke, says she feels less safe walking around her neighborhood with the refugees here, and accuses the male refugees of harassing women.

For Some Syrian Refugees, A New Home In Germany

"I've had to walk around at night carrying a truncheon, and that's not right," she says.

German groups like the National Democratic Party, or NPD, are playing on such paranoia, especially during Germany's national election season. It has hung campaign posters in Hellersdorf featuring a photo of a blond woman next to another woman whose face is covered with a black veil. The slogan reads: "Maria, not Sharia," referring to Islamic law. Most of the refugees at the center are Muslim.

Manfred Rouhs, of the anti-refugee Pro-Deutschland group — he once ran for local office on the NPD ticket — says the government has no right to force German communities like Hellersdorf to take refugees in.

"Records show that more than 90 percent of the asylum seekers who come here are economic refugees and are in no way being persecuted," he says.

Rouhs says Syria's neighbors — and not Germany — should be helping the refugees.

It's an argument playing out elsewhere in Europe. Last month, a proposal in the Swiss town of Bremgarten to segregate asylum seekers from the rest of the population drew support from the head of the country's immigration office, but criticism from human rights groups. 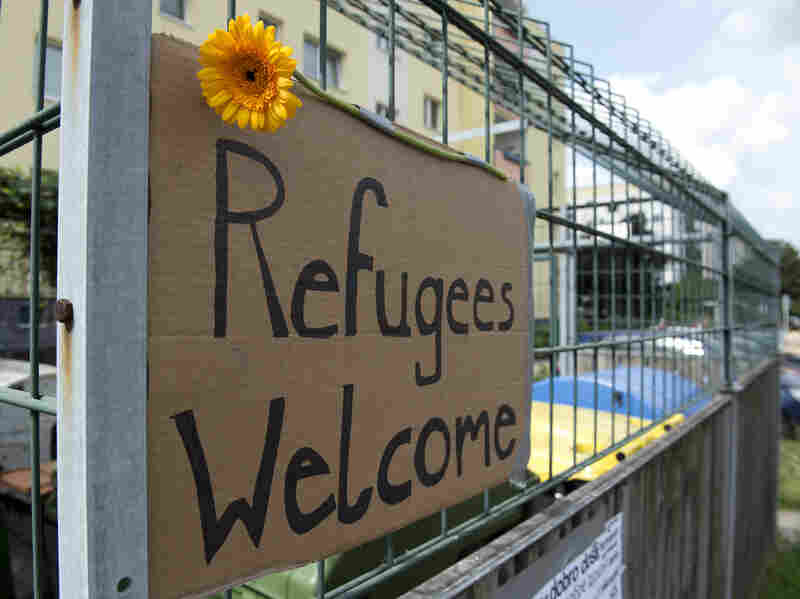 The refugees have their supporters, too. This welcome sign hangs opposite the former school that will now house asylum seekers. John MacDougall/AFP/Getty Images hide caption 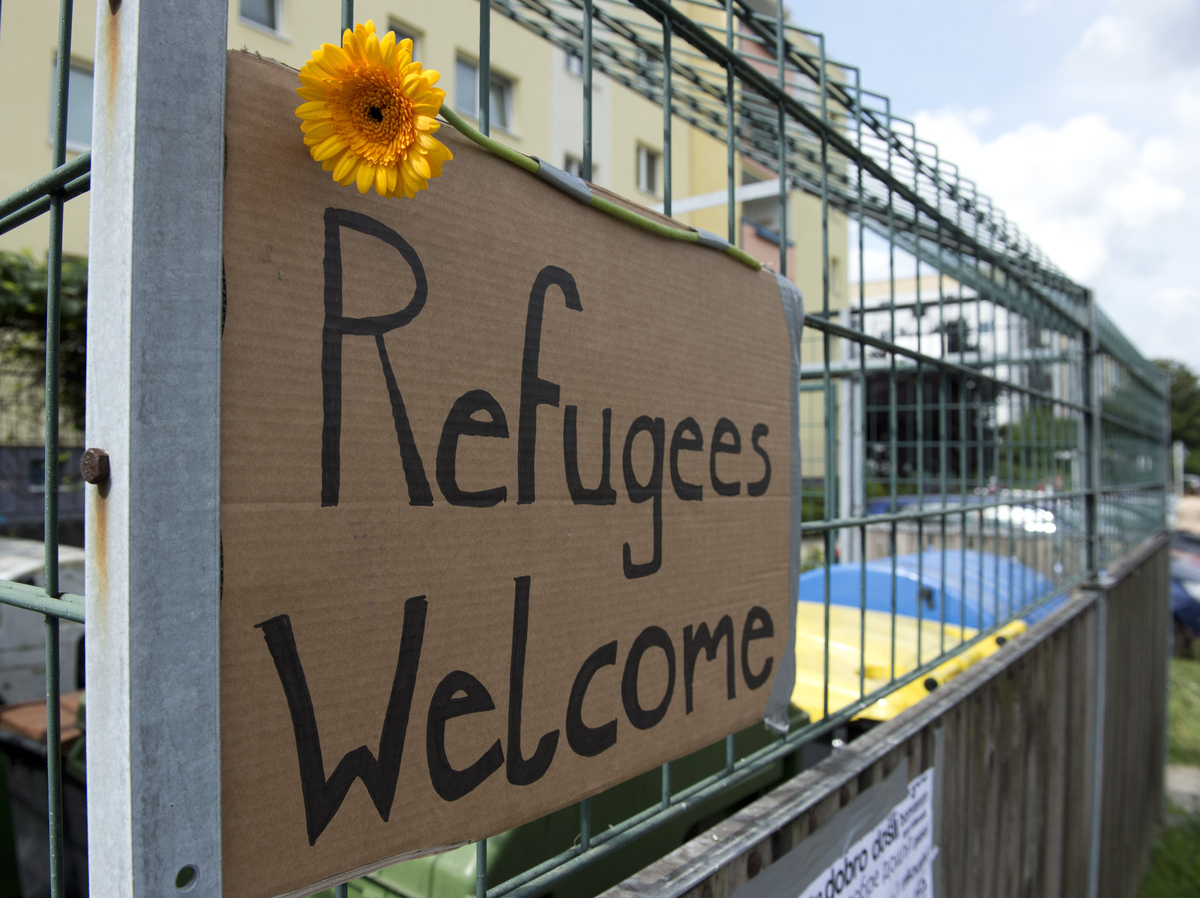 The refugees have their supporters, too. This welcome sign hangs opposite the former school that will now house asylum seekers.

That's bad not only for the city, but for the refugees, says Monika Lueke, who is the Berlin Senate's commissioner for integration and migration and integration.

"Many of them are from Syria and Afghanistan, and they are heavily traumatized," she says. "They have gone through civil war, they have seen people in their families dying, and they have fear; and it's not acceptable for them to be confronted with demonstrations like this."

Lueke added she prefers to integrate the refugees by placing individual families in apartments across the city, but that a housing shortage has forced them to open emergency shelters like the one in Hellersdorf. Refugee advocates reject the government's explanations. They say the German government should have planned long ago for the refugees given the fact that the number of asylum seekers in Germany has doubled every year recently.

Across from the new Hellersdorf refugee center, activists gather to bring attention to the refugees' plight.

"Everybody agrees that this is about the worst place you could put any human being in," says activist Dirk Meiser. "This school was closed about five years ago because it was so rotten that people said there is no financial way we can actually redo the school again.

"Now, five years later, they open the doors, move people into former classrooms, and tell them, 'Well you can live here.' "

The few refugees who venture outside the center are too afraid to talk to reporters. Most of the neighbors steer clear of the activists. But one 80-year-old resident shyly approaches them with a question. Her name is Else Haussig, and she tells the activists she wants to donate stuffed animals, toys and curtains to the people living at the school.

"We should make it as easy as possible for the refugees," she says.