Accessibility links
Youth Interrupted: Myanmar's Underage, Illiterate Workers : Parallels Child labor is not a minor social blight in the country, it's a pillar of the economy — and it looks a lot like child labor in the U.S. circa the Industrial Revolution. As Myanmar opens to the world, its child labor practices are likely to face greater scrutiny. 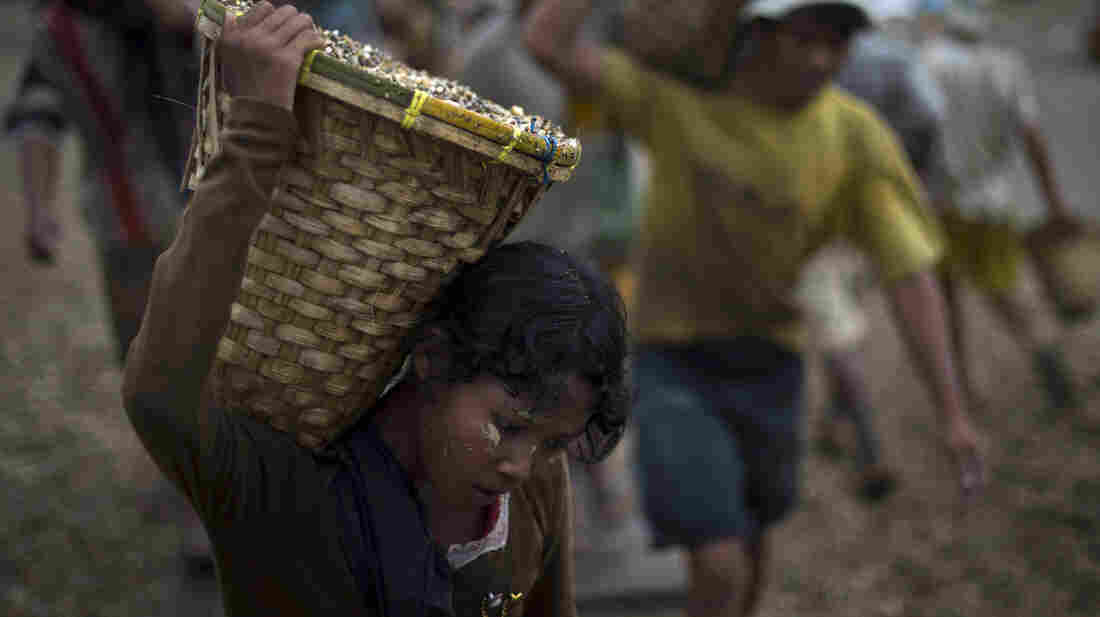 A child carries a basket of stones while unloading a quarry boat with adult workers at a port in Yangon, Myanmar, last year. The U.N. says more than a third of the country's children have jobs. Alexander F. Yuan/AP hide caption 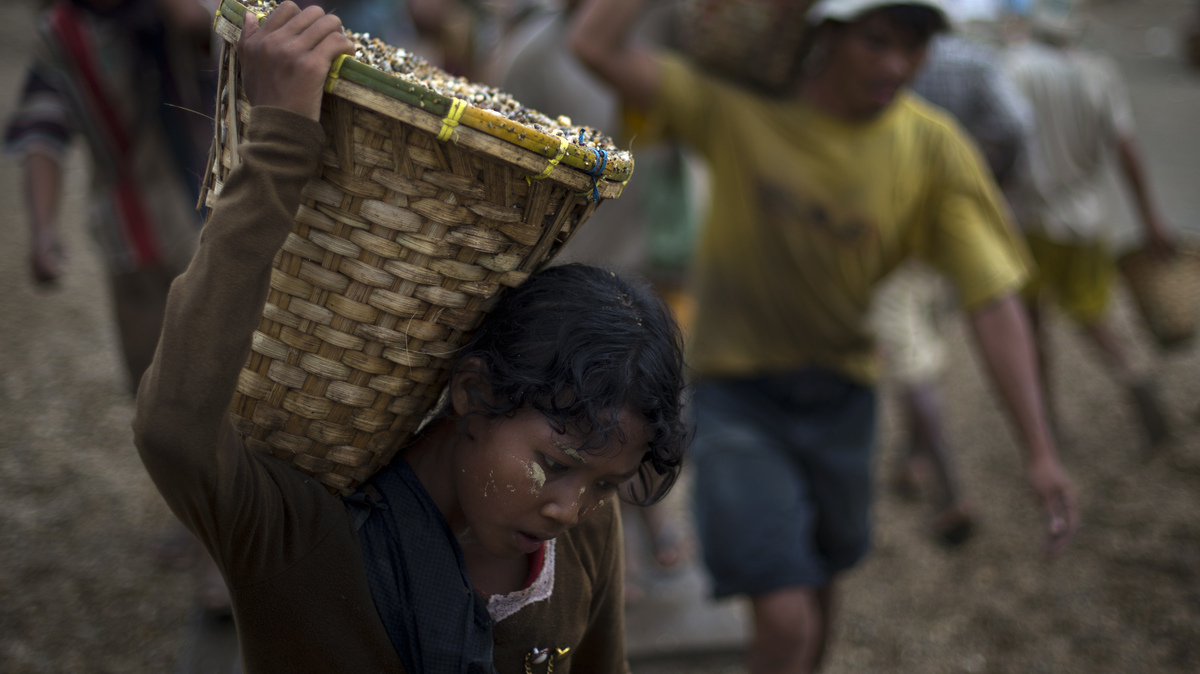 A child carries a basket of stones while unloading a quarry boat with adult workers at a port in Yangon, Myanmar, last year. The U.N. says more than a third of the country's children have jobs.

But he's sturdy enough to balance heavy, spine-bending bundles of cargo atop his skull. Strong enough to tug dinghies loaded with bananas across the Yangon River's mucky banks at low tide.

Down by the docks, where men work like mules, Little King can earn $3 per day. He is a breadwinner, the primary supporter of a woman he adores and her two children.

But that woman is his mother. Those children are his sisters. Little King is just a kid.

"I'm not even interested in girls," said Little King, whose real name is Nati Wai. After his father died, he dropped out of school and stepped into his father's role, becoming a dockworker at 11. That was four years ago. "I already have a woman to take care of," he said. "That's my mother."

The world is filled with boys and girls who lose their childhoods to hard labor. Roughly 215 million children on the planet work, according to the International Labor Organization, and more than half have jobs the ILO deems "hazardous."

That children slave away in Congo mines or stitch blouses in Bangladesh is known to everyone who follows the news.

But in Myanmar, the Southeast Asian nation also known as Burma, child labor is not a minor social blight. It is a pillar of the economy. And at this unique moment in the nation's history, that economy is set to explode.

In international rankings, Myanmar is often cast alongside nations mired in anarchy or tyranny. Maplecroft, the U.K. risk analysis firm, ranks Myanmar's child labor problem as the worst on the planet, worse even than in North Korea or Somalia.

Only two years have passed since Myanmar's military junta handed power to a partially elected parliament stacked with army loyalists in a grand experiment with liberalization. But what a difference two years can make: The police state is being dismantled, dissidents have been freed and decades-old Western sanctions have melted away. Long quarantined by generals, the growth-stunted nation has cut a sudden U-turn and now careens, for better or worse, into the globalized 21st century.

With the White House acting as cheerleader, American conglomerates are suddenly urged to invest in Myanmar's economy, a fixer-upper ruined by decades of warfare and misrule.

But when they get here, they will find a labor force propped up by underage toil.

According to the United Nations, more than one-third of Myanmar's children (defined as kids aged 7 to 16) have jobs.

"Enrollment in primary school is free of charge. But the schools aren't fully funded by the government. This brings hidden costs," said Thanda Kyaw, a senior program adviser with Save the Children's operations in Myanmar. "Parents are asked to pay for water bills or furniture. The teachers have to beg for donations ... and children with no money won't come to school out of embarrassment."

And if the donations dry up? "The teachers stop coming," Thanda Kyaw said. "There are entire schools without any teachers." She cites a school in coastal Rakhine State where mothers bribe instructors with bags of rice and bleak villages in coastal Mon State where no one is educated beyond second grade.

In slums like South Dagon, the institutional rot has run so deep that some parents no longer see the value in education. "They think sending their children to school is a waste of time," said Su Wai Htun, 25, a teacher at a free school run by the National League for Democracy, the party helmed by Nobel Peace Prize laureate and parliamentarian Aung San Suu Kyi.

Su Wai Htun's school — a clapboard room filled with 1990s-era desktop PCs — belongs to Myanmar's nonstate track of supplementary schools. Most are run for profit. Hers is free and run on donations. Government schools' teaching quality has fallen so far that kids often can't pass state tests without private, after-school tutoring sessions. This is where the real education begins. "After government school, they come here," she said. "We have to re-teach everything."

Many children in Myanmar can't behave as children. They're more like adults. With adult problems.

Some afternoons, kids fail to show up. So Su Wai Htun hits the streets. "We search for kids, drag them here, wash them up and try to teach them something," she said. "We plead with parents. 'Look, you can get 1,000 kyat [$1] per day off the kid now. But you'll get much more later if they're educated.'" But it often doesn't work.

"They tell me to never take their kids away ever again."

In Myanmar, child labor is endemic in almost every sector that requires unskilled labor. The United Nations Children's Fund (UNICEF) has compiled a list of jobs notoriously filled by kids. Among them: factory hand, stitcher, courier, house cleaner, beggar and farmer.

In other words, child labor in Myanmar looks a lot like child labor in the United States circa the Industrial Revolution. The kids in South Okkalapa even look like the children in sepia-hued photos shot in industrial America's factories and farms: bare feet, smudged faces, weary eyes.

"Many children in Myanmar can't behave as children," Su Wai Htun said. "They're more like adults. With adult problems."

Not all of Myanmar's children struggle. The elite, who live in high-walled compounds, can send their kids abroad to study. Children from a broad mercantile class — poor by Western standards — can scrape up enough money to attend Myanmar's ailing network of public secondary schools and universities.

Despite wealth flowing to the top, Myanmar's current per capita GDP stands at approximately $1,400. According to research by historical economist Angus Maddison, America hit that mark sometime before the Civil War.

But only in 1938, after the U.S. economy had roughly quadrupled, did the president sign the Fair Labor Standards Act, which barred children under 18 from dangerous jobs and children under 16 from working during school hours. That's more than a century's worth of economic ascent — with lots of tiny fingers mashed in looms and boyhood lungs blackened by coal dust.

The United States and the United Kingdom were allowed to grow their economies on the backs of children without foreign interference. Myanmar will not have that luxury.

You could pull him out of here and put him in a school. But he'd only come home to an empty plate and his mother would go hungry.

The nation has already felt the wrath of Western shame-and-boycott campaigns. In the 1990s and early 2000s, Pepsi, Levi-Strauss, British American Tobacco and others fled the country in an exodus stoked by activists targeting every firm operating in military-run Myanmar. But a reversal appears nigh: General Electric, Ford, British American Tobacco, Visa, MasterCard and other multinationals have already come back. This is widely assumed to be the trickle that presages a coming flood.

The most visible of all returnees are Coca-Cola and Pepsi. Both are blanketing Yangon with ads in hopes of winning over the taste buds of a nation not yet hooked on soft drinks. The cola war has even spilled into Myanmar's premier socialization spot — tea shops — and onto uniforms worn by the prepubescent boys who dash about serving superpotent milk teas.

"Pepsi? I never had it," said Zaw Lin Htet, who is around 13 or 14. (He does not know his birthday.) But he and the other dozen-plus, baby-faced dropouts employed by the Morning Star tea house in downtown Yangon now wear work shirts adorned with Pepsi's logo. So do an increasing number of tea shop boys around Yangon. (Pepsi did not respond to requests for comment.)

For $25-$30 a month, Zaw Lin Htet and the crew work from dawn until 9 p.m. They live apart from their families in a single cement room by the shop's outhouse. "School was useless for me. I'd rather work here," he said. He and his workmates consider themselves fortunate: Their alternatives include grinding factory jobs or sloshing around in rice paddies. "But I miss my parents," Zaw Lin Htet said.