Accessibility links
For Some NYU Students, A Sweet Deal To Study ... In Shanghai : Parallels New York University's new Shanghai campus is the first Sino-U.S. joint-venture university. Chinese students get a Western education without leaving home. American students get to live and study in China, with many enjoying big breaks on tuition and other costs. 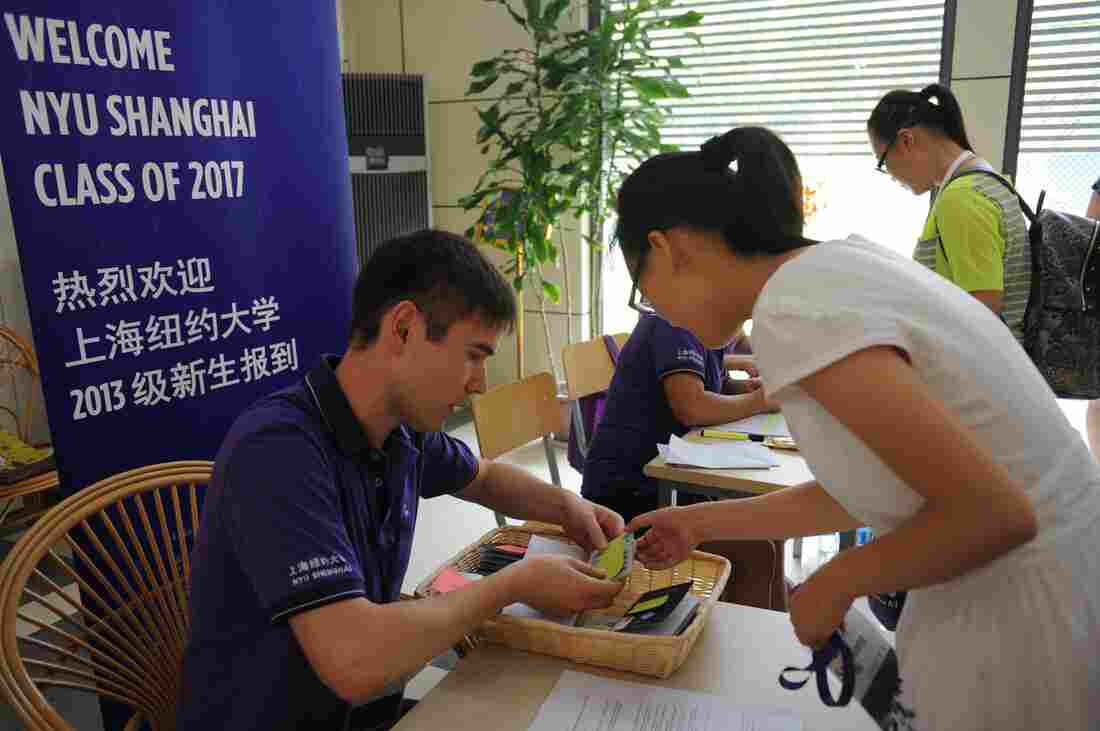 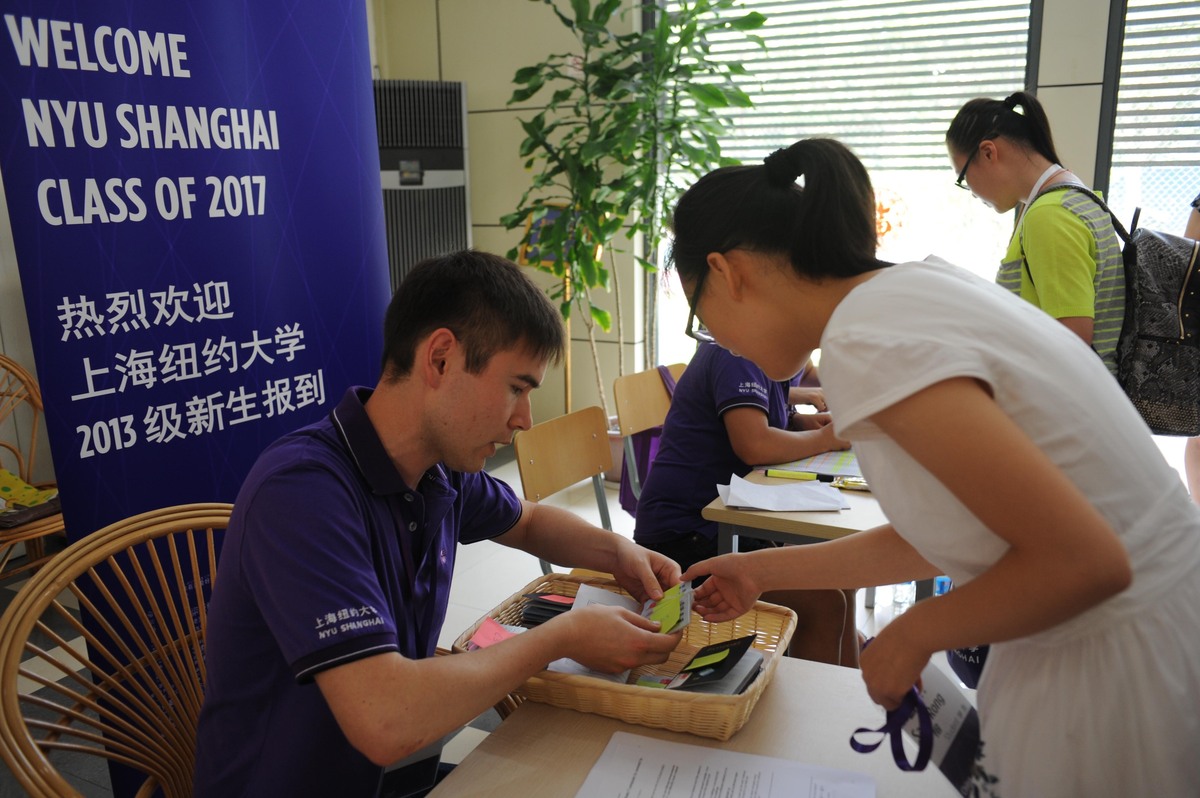 New York University in Shanghai is the first Sino-U.S. joint university. Here, a student speaks with an NYU staffer on Aug. 11.

First-year college student Stephanie Ulan, from Queens, N.Y., had her sights set on New York University, in the heart of Manhattan's Greenwich Village.

She got her wish — sort of.

At first, the school offered her a generous scholarship but told her and her father they'd still have to take out big loans.

"My father is 62 years old," says Ulan, who plans to major in international relations. "There was a big scene and he flipped out and he was, like, 'I can't do that.' "

Then, NYU made her a better offer — but only if she attended NYU's new Shanghai campus, where she'd applied as an afterthought by clicking a box on an application. The deal: tuition, room, board and even reimbursement for her plane ticket to Shanghai.

"I was a little bit flabbergasted," says Ron Ulan, Stephanie's dad, who works as a computer programmer with the New York City Police Department.

Ron, who says he lives check to check, calculated the savings over four years.

And ultimately, that's how Stephanie Ulan found herself among the students at NYU Shanghai this month, when classes opened at the first Chinese-American, joint-venture university.

The NYU Shanghai campus aspires to educate a new generation of students who can speak English and Mandarin and navigate U.S. and Chinese culture.

For Students, A Variety Of Perks

For many first-year students like Ulan who are willing to take the plunge, there is an added benefit: huge tuition breaks. 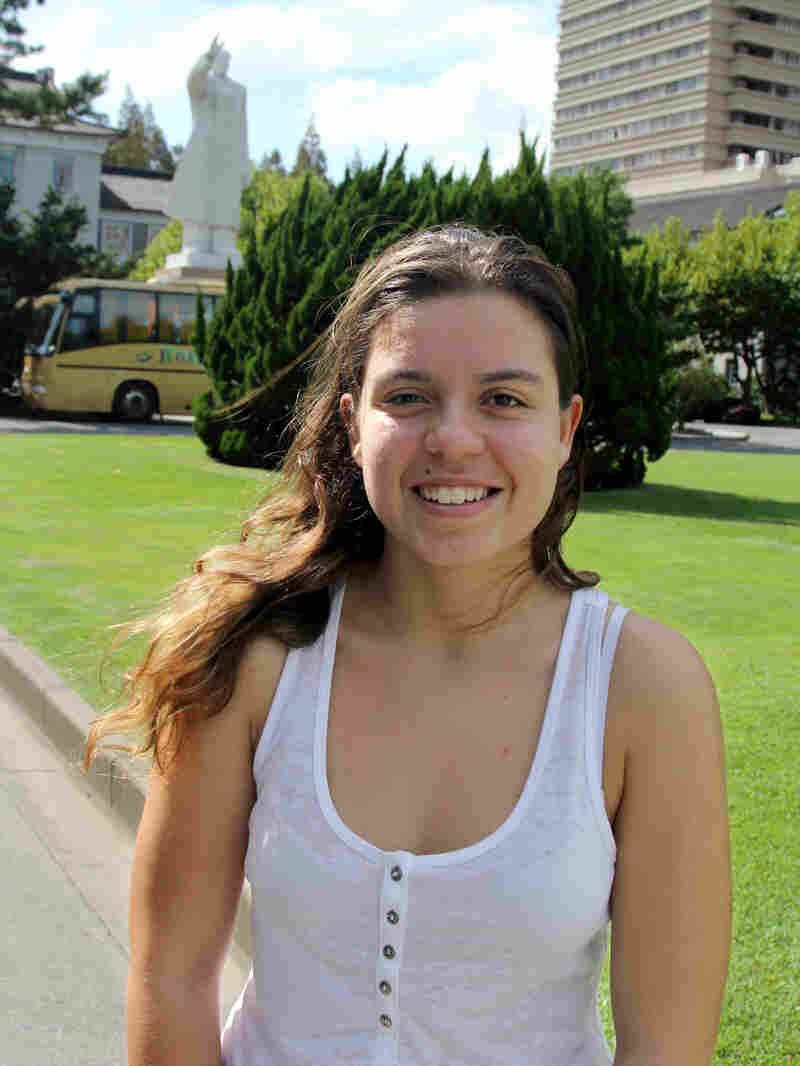 Stephanie Ulan, an 18-year-old from Queens, N.Y., wanted to go to New York University in Manhattan. But after the school offered her free tuition at its Shanghai campus, she headed for China. Frank Langfitt/NPR hide caption

Although money was a big factor in her decision, Ulan says she's glad she came to China, because she's stretching herself in ways she never would have back home. While her friends at American universities talk about partying every night, Ulan says she's often focused on more basic needs.

"I need to find someone who speaks Chinese, because I want to eat lunch today," says Ulan, 18, who adds that she's determined to learn the language.

Ulan wasn't the only U.S. student at the campus to get financial aid. Half a dozen others with whom NPR spoke said they got either huge discounts or free tuition.

Why is NYU Shanghai being so generous?

Ron Ulan thinks it's because the school wants to attract quality students to a new program. Jeff Lehman, the vice chancellor of NYU Shanghai and the former president of Cornell, puts it a bit differently. He says the school was able to offer huge scholarships with the help of private donors, including Chinese interested in reforming the country's education system.

"We've benefited from tremendous philanthropic support," says Lehman, speaking from his office on the leafy campus of East China Normal University, NYU's joint-venture partner in Shanghai. "As we prove ourselves, I very much hope that kind of support will translate into the creation of a great endowment."

The inaugural class of 300 is nearly split between Chinese and international students, including 90 from the U.S. Every foreign student rooms with one from China.

The attraction for Chinese students is getting a Western education without leaving home or draining their parents' bank accounts. The Shanghai government pays roughly two-thirds of their $45,000 annual tuition bill.

Yang Xiran, who grew up in southwestern China's Sichuan province, says she came to NYU Shanghai to get away from the country's rote style of learning and to engage with professors. 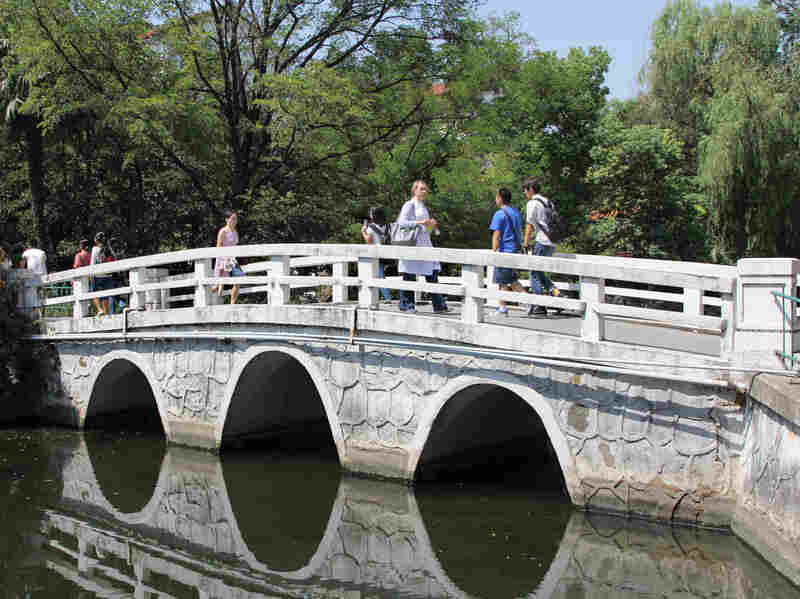 The university is currently located on the leafy campus of East China Normal University. Next year, NYU Shanghai will move to a 15-story building in the city's financial district. Frank Langfitt/NPR hide caption 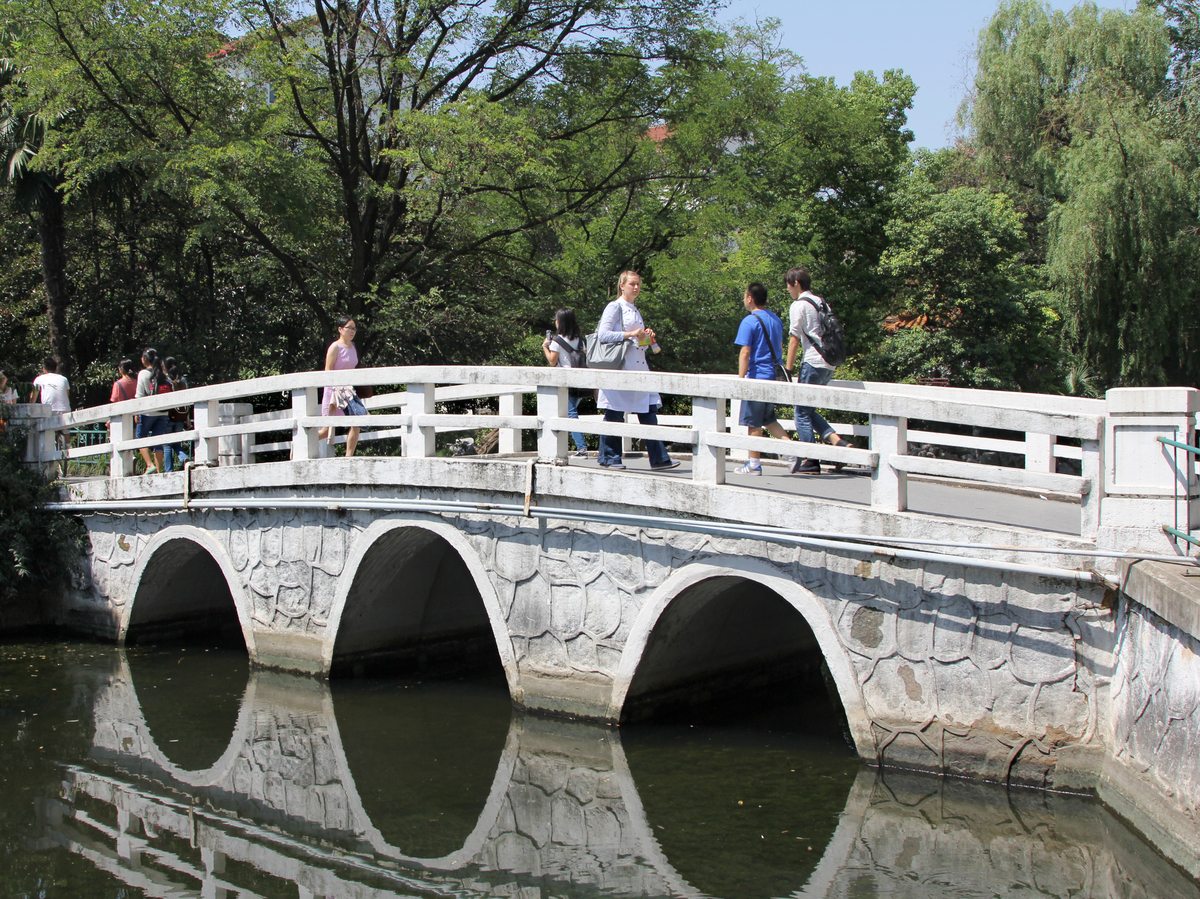 The university is currently located on the leafy campus of East China Normal University. Next year, NYU Shanghai will move to a 15-story building in the city's financial district.

"[At NYU] the teachers want you to be involved in the class more," she says. "They want you to ask, 'Why?' In my high school, the teacher just kept talking."

Phyllis Cai, from neighboring Jiangsu province, finds the classrooms at NYU Shanghai much freer than traditional Chinese ones.

In the first week, students discussed politically sensitive topics such as the 1989 Tiananmen Square uprising. When Cai tried to address the subject in a presentation in her Chinese high school, her teacher stopped her and told her to never bring it up again. Cai did get to make a presentation to her high school class, but she had to change the topic to something less controversial: food.

One thing Cai finds challenging is the language. All classes at NYU Shanghai are taught in English.

"Sometimes, I just can't understand all the things my classmates and professors said and I do practice listening every day," says Cai, who estimated her comprehension at about 70 percent.

Some faculty back in New York worry that NYU — which also has a campus in Abu Dhabi — has expanded too quickly, straining resources. Rebecca Karl, a faculty senator and China scholar, says that as professors head overseas to staff other campuses, NYU New York suffers.

"In the senate committees I'm in, the complaints have been persistent about Abu Dhabi," she says, "particularly from such places as the Economics Department, which has had trouble finding people to teach the large intro courses here in New York because their professors are going abroad."

Lehman says Shanghai has minimal impact on New York. Of the 50 faculty this year, he says, only 15 are from the Manhattan campus and only three of them are in Shanghai for the entire year.

Richard Vedder, who runs the Center for College Affordability and Productivity, a Washington think tank, says schools like NYU face some big challenges these days. He says with students balking at high tuition and endowment growth slow, schools like NYU are looking to other countries.

"I think there's a financial motive," he says. "They want to have a top, national reputation — and they do have a good reputation — but they don't have the resources or the historical prestige that the Harvards have."

So, Vedder says, schools like NYU have to look overseas "to expand [their] franchise and also to make some money."

What does Shanghai stand to gain from the partnership?

For one thing: prestige.

NYU is widely respected. Shanghai's Pudong district government is giving the school rent-free use of a 15-story building — estimated to be worth hundreds of millions of dollars — in China's Wall Street, Lujiazui.

Yu Lizhong, chancellor of NYU Shanghai, says the school will help the image of Lujiazui, which, despite its towering architecture, has yet to become the hub city planners envisioned.

In fact, he says, it's already happening. When prospective students used to interview at East China Normal, they would sit and wait with nothing to eat or drink. After watching NYU's more gracious approach, Yu says East China Normal — known as ECNU — changed.

"Now, ECNU also prepares some tea, coffee, and some dessert for the student, to make them comfortable, to [feel] respected," Yu says.

That may sound small, but it's meaningful change. In China's hierarchical education system, a prospective student is seen as a supplicant, not a consumer.

Of course, NYU Shanghai has far bigger goals. They include building an undergraduate student body of 2,000 and developing a sustainable way to fund the fledgling school.