Accessibility links
Ethical Tradition Meets Economics In An Aging China : Parallels As people around the world live longer, many nations are having to find new ways to care for their aging populations. In China, a new law requires adult offspring to visit and look after their elderly parents. China's one-child policy complicates the issue further, and some dismiss the law as another attempt to legislate morality by a government that is riddled with corruption. 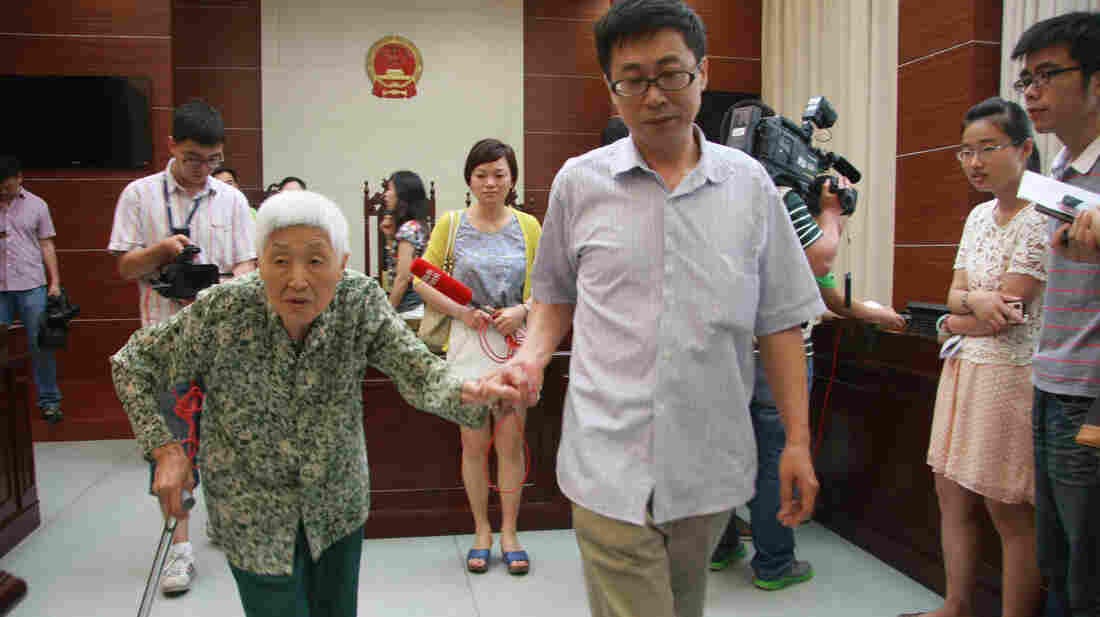 A woman surnamed Chu (left), 77, attends the hearing of a case against her daughter and husband in Wuxi, east China's Jiangsu province, on July 1. Chu's daughter has been ordered to visit her at least once every two months, in the first case under a new law to protect the elderly. AFP/Getty Images hide caption 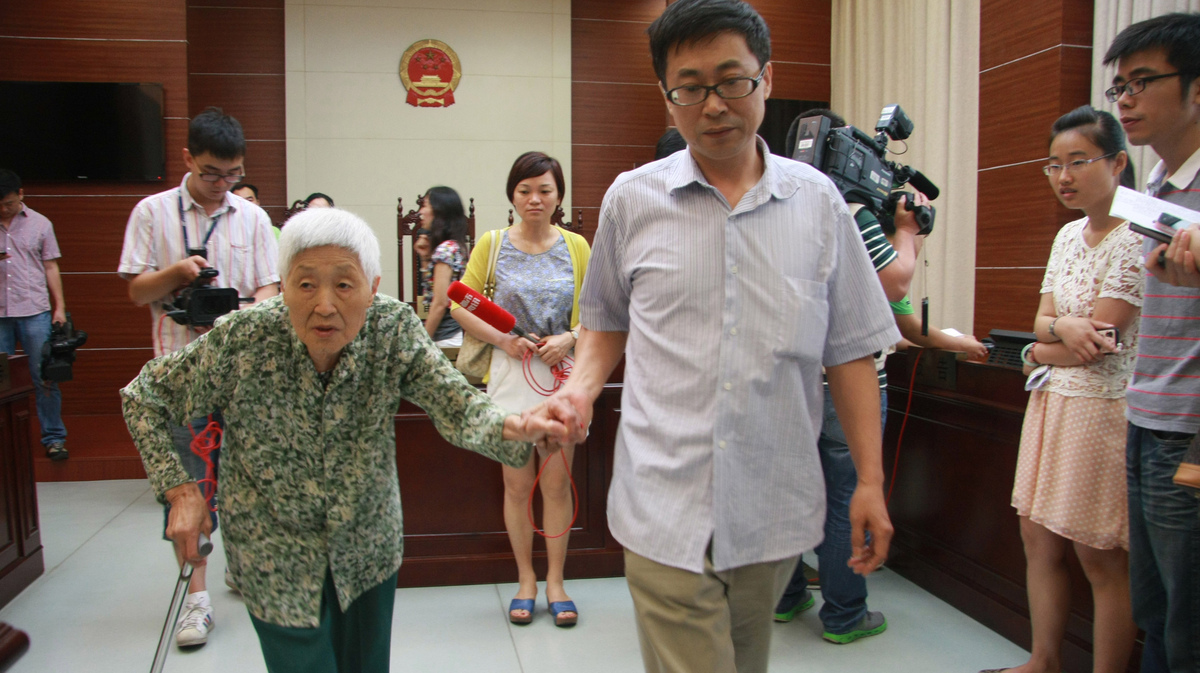 A woman surnamed Chu (left), 77, attends the hearing of a case against her daughter and husband in Wuxi, east China's Jiangsu province, on July 1. Chu's daughter has been ordered to visit her at least once every two months, in the first case under a new law to protect the elderly.

The sound of Buddhist chants wafts through an annex of the Songtang Hospice, the first private facility of its kind in Beijing. A group of lay Buddhists is trying to ease the passage of a recently departed soul of a patient.

When I first visited this place nearly two decades ago, the average patient stayed just 18 days. Now, it caters to people who are not terminally ill, and the average stay is about five years.

China is home to the world's largest aging population, and its attitudes and treatment of the elderly are changing. In the past, there was little mention in China of the rights of the elderly. Instead, ancestor worship and Confucian respect for the elderly were the norm.

But since this summer, Chinese law requires adult offspring to visit their elderly parents and look after their emotional needs. A number of cases of parents suing their deadbeat kids for emotional support have gotten heavy play in the Chinese media.

Upstairs at the hospice, Huang Xuebing is visiting his mother, who has now been here for around five years and whose health is declining. Huang visits her here every day, but he still blames himself for not taking better care of her.

Huang says he tried to take care of his mother at home, but the caregivers he hired all quit. Huang's family comes from northeast China, and his mother's medical insurance will only pay for her treatment in her home province. So Huang uses all of his mother's pension, plus contributions from his siblings, to pay for his mother's stay at the hospice.

Huang admits he's struggling to reconcile his obligations to his mother versus those to society.

"I come here every day, but I have to take time out from work for it," he says. "When I come here to sit by her bedside and look after her every day that means that I haven't contributed to society in any other way, right?"

The challenge of caring for China's elderly is evident in the demographics. As of last year, China had about eight working-age people for every senior citizen. By midcentury, there will be only two people supporting each senior. This is because people are living longer, and they're having fewer children, in part because of China's one-child policy.

In another room of the hospice, I met a cheerful-looking 94-year-old retired teacher named Lian Yicheng. She says her daughter visits her just twice a month, and that's just fine by her.

"If there's nothing wrong, I don't ask her to come here," she says. "It's a three-hour round trip for her, so a visit takes up half her day. I tell her I'm fine, I'm alive and kicking, what's there to come over and see?"

She was separated from her children first during World War II. When the Japanese army invaded her home town of Wuhan, she fled to the wartime capital of Chongqing, then known as Chungking. She was separated from them again during the chaos of the Cultural Revolution of the 1960s, so she got used to fending for herself.

Lian believes that how each person looks after his or her parents is a matter of individual character. She doesn't think it's something you can regulate by law.

"It's something you have [to] cultivate gradually. You can't force it," she says. "My daughter has her work and her own activities. She can't live in the past, according to the feudal thinking and Confucian ways of my generation."

Holding On To Tradition

Confucianism held filial piety to be the most important ethical principle in human relations and the model for other relations; between husband and wife, ruler and minister, etc. Confucian respect for the elderly remains a powerful force in Chinese society, but it's a far cry from what it used to be.

In the past, for instance, many Chinese learned respect for the elderly from a 13th century collection of stories about 24 models of filial piety. One example is a man named Guo Ju, who was so poor he couldn't afford enough food for his elderly mother and young son.

So he decided to bury his son alive in his backyard. He could always have more children later, he reasoned, but he could never have another mother. The story ends happily, with heaven rewarding Guo for his filial attitude, so that both his mother and child survive.

A century ago, this interpretation of Confucianism was already being criticized. The idea of sacrificing a child to save a parent was lambasted as inhumane and the basis for a slavish deference to authority.

Given the residual influence of Confucianism, says Songtang Hospice founder Li Wei, the problem of caring for China's elderly is mainly an economic one, not an ethical one. He says it's not realistic to expect parents to sue their children for emotional support, and this is why there have been so few cases going to court.

"An 80-year-old who is no longer independent, who can no longer walk, how can they go sue someone in court?" he says. "It's never happened, because our citizens don't have a history of being litigious."

Li knows a thing or two about caring for the elderly. During the 1966-76 Cultural Revolution, Li served as a "barefoot doctor," treating the ill and dying with little training, medicine or equipment. Since he founded Songtang more than two decades ago, he's seen off more than 10,000 patients from his hospice. He has even named himself after his own institution and now goes by "Li Songtang."

Li argues that most of the people who bring their parents to his hospice are not unfilial children.

"The ones who are really unfilial are those who put their old folks in a coffin made of four concrete walls," he says. "They go off to do their work, and leave the old person all alone and lonely. This kind of thing happens all the time."