Accessibility links
World Immigration Called 'Win-Win' For Rich Nations, And Poor : Parallels The number of people who leave their countries to work abroad is soaring, according to the United Nations, which is meeting on the subject this week. More than 200 million people now live and work outside their country of origin, up from 150 million a decade ago. 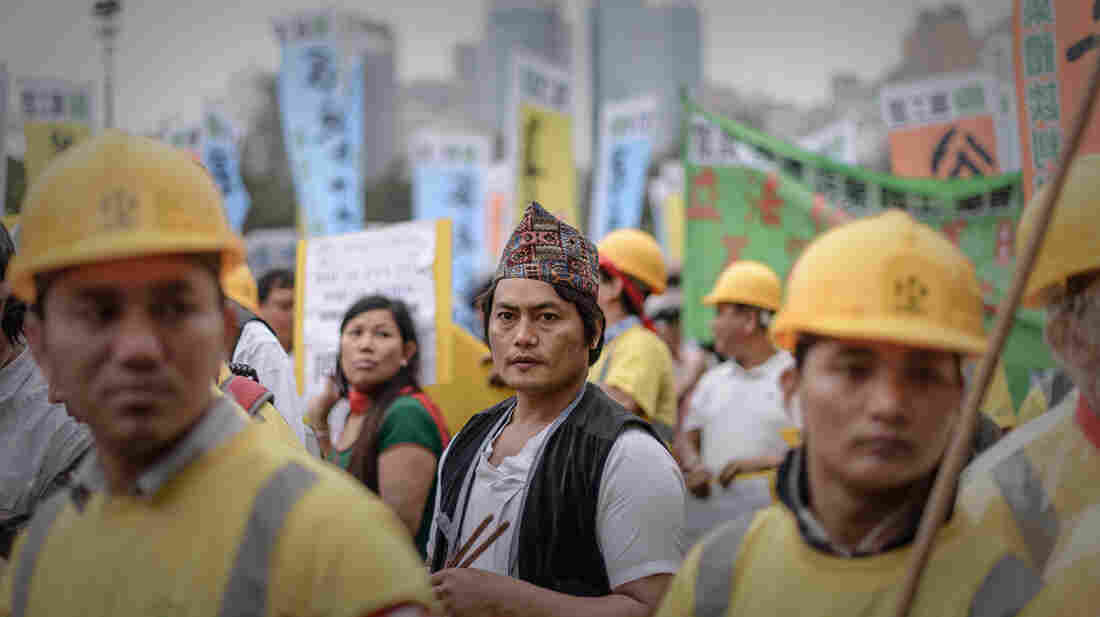 Migrant workers from Nepal take part in a Labor Day rally in Hong Kong in May. This week, the United Nations holds a high-level meeting on issues related to worldwide migration. Philippe Lopez/AFP/Getty Images hide caption 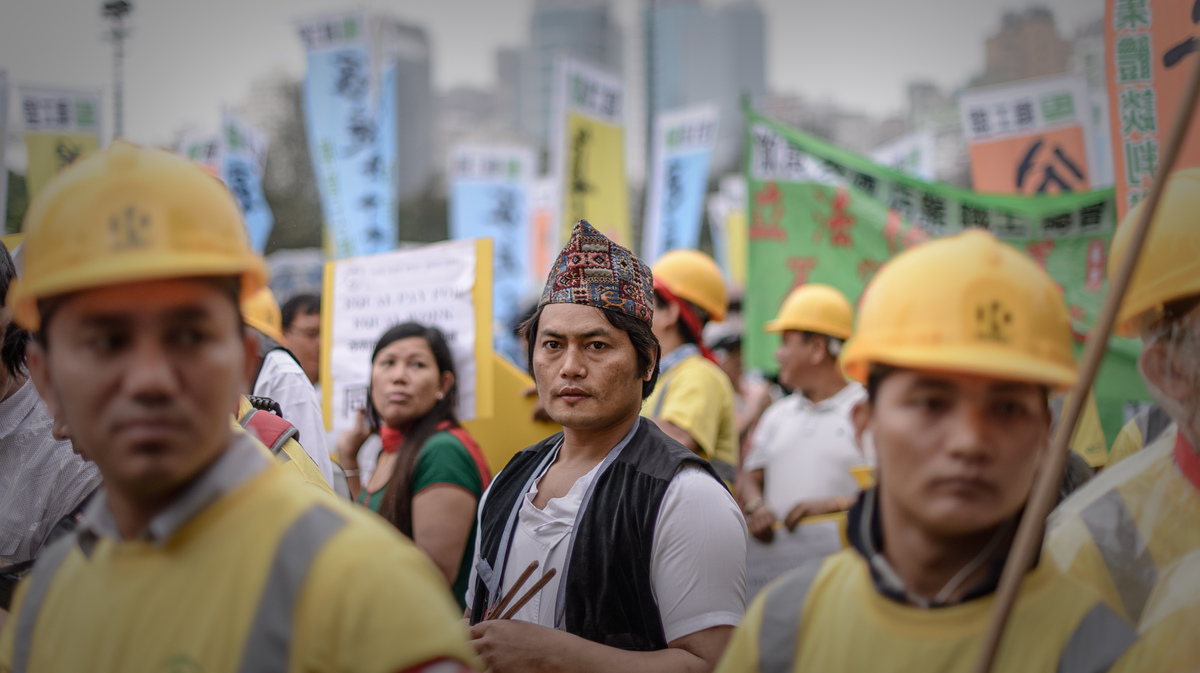 Migrant workers from Nepal take part in a Labor Day rally in Hong Kong in May. This week, the United Nations holds a high-level meeting on issues related to worldwide migration.

The number of people who leave their countries to work abroad is soaring, according to the United Nations. More than 200 million people now live outside their country of origin, up from 150 million a decade ago.

Beginning Thursday, the U.N. will hold a high-level meeting on the subject in New York.

In the Philippines, at the offices of Industries and Personnel Management in Manila, some 30 nervous applicants sit in hard plastic chairs watching a video about a day in the life of an employee at a duty-free shop at the international airport in Dubai, on the Persian Gulf.

As soothing music plays in the background, the video shows workers — in robin's egg blue jackets — looking almost robotic as they cheerfully assist customers in checkout lanes and count money. 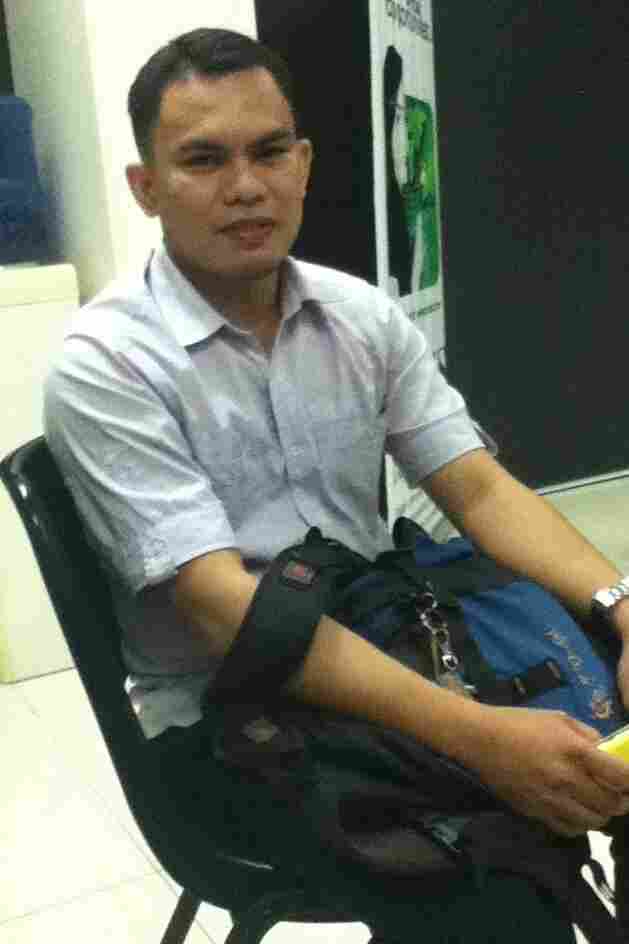 Markco Tuazon, 28, has a degree in computer science but can't find work in his field in the Philippines. He is hoping to find work overseas to help save up money to open his own business. Ashley Westerman/NPR hide caption

The recruitment agency says about 200 people applied for only 30 open spots. Among the applicants is Markco Tuazon, 28, who has a degree in computer science but can't find work in his field.

Tuazon says if he gets the job, he'll send money back to the Philippines until he makes enough to return home and open a business.

Where The Money Goes

While Tuazon ultimately wasn't among the 30 applicants chosen for the jobs in Dubai, his story is common in the Philippines, where a declining manufacturing sector forces 1.2 million Filipinos to find work abroad every year.

That's just a fraction of the number of migrant workers worldwide. And because migrants generally send money to their families back home, the U.N. says nearly a billion people benefit from migrant wages.

Peter Sutherland, who heads Migration and Development for the U.N., says migration is a win-win: The host country gets workers it needs to keep its economy going, and the home country gets an economic boost.

Sutherland says the amount of money migrants send back to developing countries exceeds all the aid those countries receive from richer nations.

Last year, the Philippines collected $24 billion in such remittances from Filipinos working abroad. Only China, India and Mexico collected more.

In the Philippines, some industries train migrant workers before sending them abroad.

At an abandoned expo center in Pampanga, a few hours north of Manila, an Australian company, Site Group International, is training veteran oil and gas workers to navigate great heights at construction zones.

The company sends its workers to jobs in Australia, Papua New Guinea and the Middle East.

Being a migrant worker is risky because in many countries they have few rights and protections. The Middle East takes in more migrant workers than any other region. The latest U.N. statistics show almost 17 million work in Saudi Arabia and the United Arab Emirates. Human rights groups including Amnesty International and Human Rights Watch say abuse of migrant workers is rampant in the region.

The groups also cite reports of human trafficking among migrant workers in several developed countries. And in the U.S., a class-action lawsuit in federal court in Louisiana alleges wide-scale industry abuse of oil and gas workers.

This story was funded by a reporting fellowship from the International Center for Journalists in Washington.