Accessibility links
'Castrocare' Divides Doctors In Cuba, Brazil : Parallels Cuba has been sending doctors abroad for decades to work throughout Latin America and as far away as Africa. So it's not surprising Brazil turned to Cuba when it wanted to import thousands of badly needed doctors. But Brazil's medical establishment objects and wants to block the program. 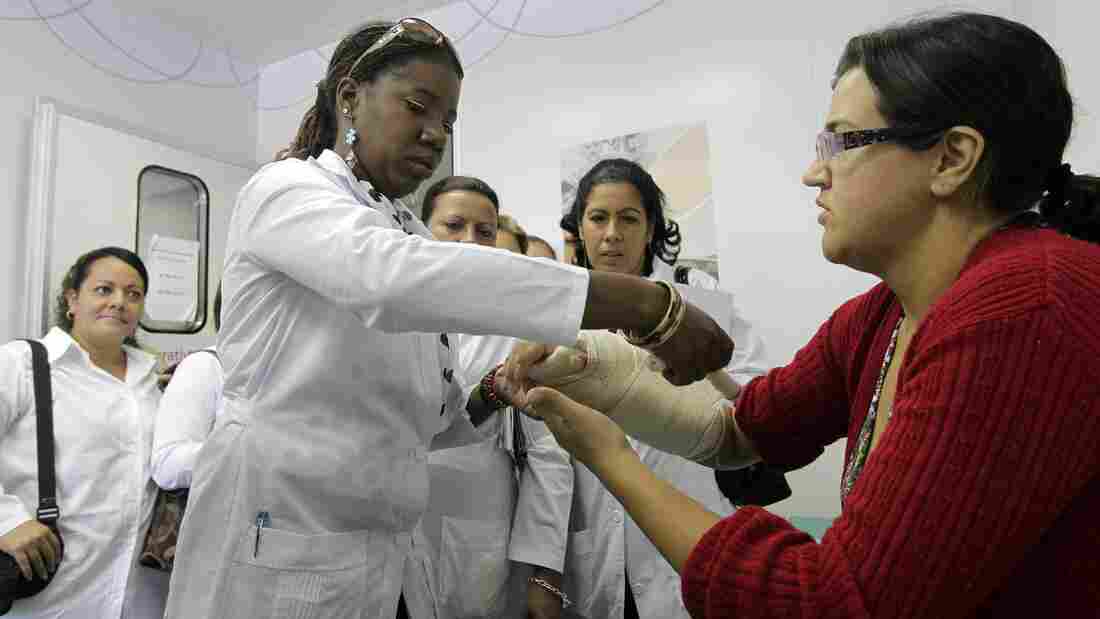 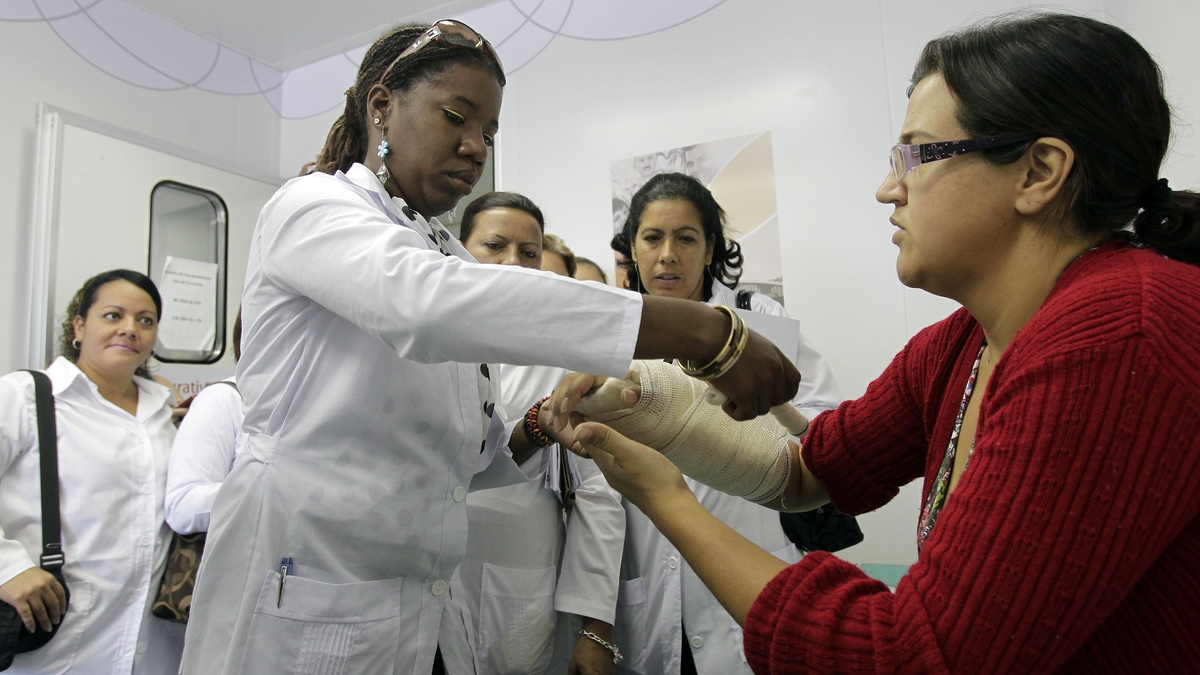 Cuba is sending thousands of badly needed doctors to Brazil, but Brazil's medical establishment has sought to block the program. Here, Cuban Dr. Yocelin Macias treats a patient in the capital Brasilia on Aug. 30.

Call it "Castrocare." Cuba's former leader Fidel Castro sent doctors abroad for decades to work throughout Latin America and as far away as Africa.

In some cases, like Haiti, the medical missions were seen as purely humanitarian. In other places, like Venezuela, it was a form of barter that provided Cuba with subsidized oil imports.

Cuba has long boasted of its program, which has generally been well-received. So now Cuba is sending thousands of doctors to Brazil, which badly needs the physicians in poor, rural areas and has the money to pay for them. However, the program is meeting resistance in Brazil — not from patients but from the medical establishment.

In the town of Pedreira, about 85 miles outside Sao Paulo, Luis Fernades dos Santos is getting a broken tooth cared for at his local public health clinic.

After the procedure, he says he's heard about the Cuban doctor who is to be working here soon and thinks it's a good thing.

"Here in the city, you see people sleeping — sleeping — for a day, two days waiting in line to see a doctor. And when it's their turn, there is no doctor to see them," he says. "So that's why I think bringing people in to help will make things better."

Over the summer, massive protests broke out in Brazil, decrying, among other things, the state of the public health system. The problems include aging equipment and a lack of medical facilities, things that take time to fix. But the government moved quickly to address the lack of doctors by bringing in Cuban physicians.

Opposition From The Medical Establishment

The patients may be in favor, but most of the Brazilian medical community is not.

When Cuban physicians arrived in the city of Fortaleza in August, Brazilian doctors shouted at them, "Slaves, slaves!"

"We are not slaves," says Tania Aguiar Sosa, one of the Cuban medical workers with decades of experience. "We are health workers. We are professionals that provide help to whatever country needs it."

She's worked in Venezuela and Haiti previously and was headed to Angola before being rerouted to Brazil.

Brazilian medical unions are trying to mount a court challenge to the use of Cuban doctors here.

Jose Roberto Murisset, the human rights secretary of the National Doctors Federation, says that the Cuban government takes most of the money that is paid for the doctors. The Brazilian government has also decreed that the Cuban doctors have no right to ask for asylum in Brazil.

"Brazil has strong labor rights, but these Cuban doctors don't have their rights guaranteed," he says.

The main bone of contention is that foreign doctors arriving under the new program don't have to take the Brazilian medical exam to practice. Murisset says that many of the doctors coming from abroad would fail the test and are underqualified.

"Maybe the government thinks that these regions don't need a full doctor. Maybe they think they need only a half doctor," he says.

He says he has 50 beds at his facility serving 44,000 people in the community. If he can get more doctors handling preventive care, then the main hospital will feel less pressure, he says.

"What we need is basic attention. We lack doctors willing to work as general practitioners in marginal communities," he says, adding that 80 percent or more of the health problems people face can be resolved by seeing a doctor at an early stage.

He says most Brazilian doctors don't want to work in poor, rural communities like his, though the need is great.

When the Brazilian government announced the program to bring in foreign doctors, more than 4,000 towns and cities applied to the federal government for extra help.

Back at the health clinic where a Cuban doctor will be working, Brazilian doctor Flavio Blois de Mattos says he welcomes the help. He's overwhelmed at the moment. But he also thinks the Brazilian program is unethical.

He says the Cuban doctor agreed to come even though the Cuban government gets the lion's share of her salary, paid by the Brazilian government. Still, the Cuban physician will make more in Brazil than she would in Cuba. And that will help her 15-year-old daughter.

"I don't think it's correct. We are a democracy. Why aren't we giving them the same rights we have?" he says.