Accessibility links
Car-Centric Spain Begins To Embrace The Bicycle : Parallels For the first time on record, bicycles have outsold cars in Spain. Higher taxes on fuel and on new cars have prompted cash-strapped Spaniards to opt for two wheels instead of four. 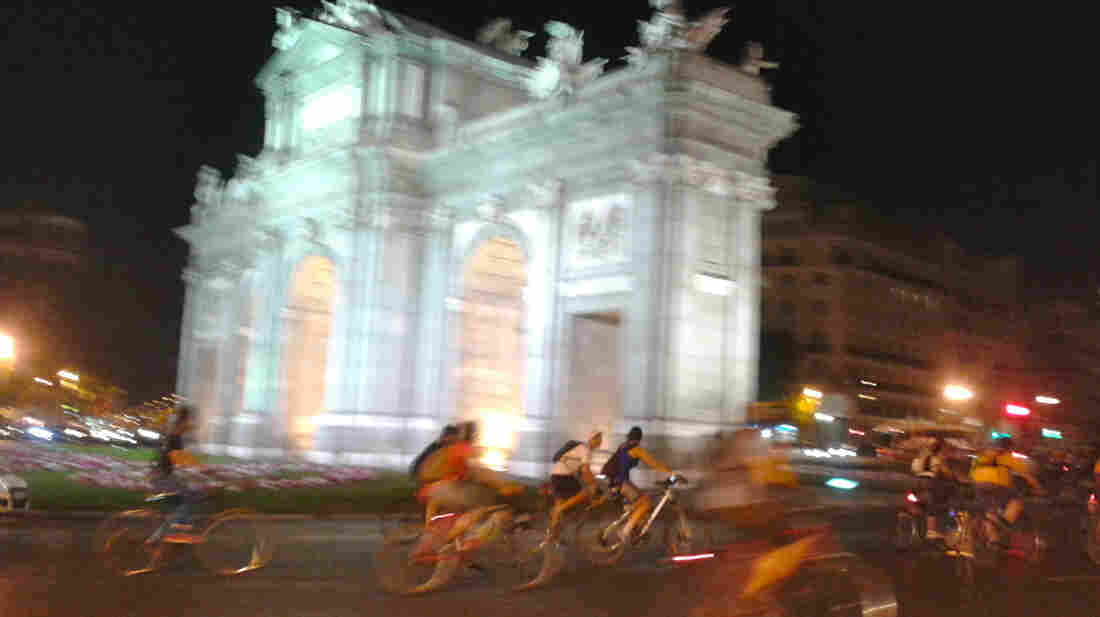 Cyclists whiz past Madrid's Puerta de Alcalá monument as part of Bici Crítica, a movement that seeks to raise awareness of bike safety. On the last Thursday of every month, thousands of cyclists ride in unison through downtown Madrid, blocking traffic during rush hour. Lauren Frayer/NPR hide caption 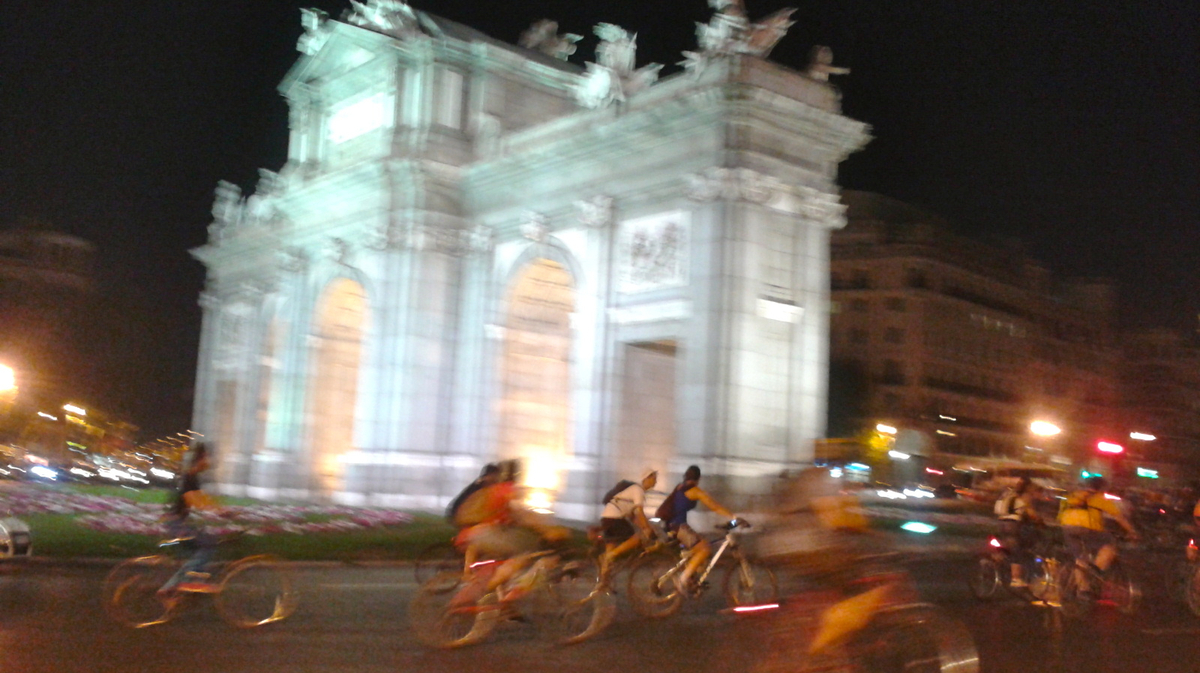 Cyclists whiz past Madrid's Puerta de Alcalá monument as part of Bici Crítica, a movement that seeks to raise awareness of bike safety. On the last Thursday of every month, thousands of cyclists ride in unison through downtown Madrid, blocking traffic during rush hour.

For the first time on record, bicycles have outsold cars in Spain.

Higher taxes on fuel and on new cars have prompted cash-strapped Spaniards to opt for two wheels instead of four. Last year, 780,000 bicycles were sold in the country — compared to 700,000 cars. That's due to a 4 percent jump in bike sales, and a 30 percent drop in sales of new cars.

But unlike countries in northern Europe like the Netherlands or Belgium, Spain doesn't have a long-standing bicycle tradition. Spaniards cheer on their countrymen in the Tour de France or Vuelta a España bike races on TV each summer. But that hasn't trickled down to real people commuting to work on bikes. In fact, Spain has one of the highest fatality rates for road cyclists in Europe.

A group of self-proclaimed "cycling activists" in Madrid is trying to change that — forcing cars to share the road and teaching reluctant Spaniards how to bike to work.

"It was not a bike-friendly city. So for that, cycling in Madrid makes you an activist," said Pablo Leon, 33, who writes a blog called "I Love Bicis." "But I think one day in the future, people who use bikes are not going to be activists anymore. They're going to be just citizens, who ride bikes."

Leon participates in Bici Crítica, the Spanish version of Critical Mass, a take-over-the-streets bike movement born in San Francisco in the 1990s. In Madrid, the movement got a late start. It began here in 2004 with just four riders, and by 2009, had barely 20 participants. But then the economic crisis hit.

Now thousands of cyclists occupy the Spanish capital on the last Thursday of every month, halting traffic at rush hour. They gather at a 19th-century palace in central Madrid, and ride a different route around the city each month.

"People are fed up to wait for the City Council to make bike lanes. Because when they had the money, they didn't do it," says Iván Villarrubia, a 36-year-old urban planner and self-styled bike activist. "And now that they want to do it, they don't have the money."

Villarrubia believes newcomers to biking should learn to share the road with cars, rather than wait for City Hall to build bike lanes. So far there are only a handful in the capital. "Long-term, to know how to share, to yield, to slow down — that's the correct solution."

Villarrubia also volunteers to teach his fellow Madrileños how to commute by bike. He meets people at their homes, and guides them to their workplaces by bike. He also has printed maps of the city's quiet, bike-friendly back streets.

"After that, they say, 'Oh my God, it was very easy. Why was I so stupid not to do this for the past 10 years of my life?' " Villarrubia says.

Despite the weather, cycling has long been more popular in northern Europe — Belgium, the Netherlands, Scandinavia — than in Spain. In Amsterdam, about 60 percent of travel is done by bike.

But Spain has long had a love affair with cars. The country spent much of the 20th century in poverty. Cars became symbols of progress and wealth, Villarrubia says.

"In Spain, the Industrial Revolution came very late. So in the 1960s, to have a car was to say, 'I have passed the postwar poverty,' " he says. "So there are a lot of people who don't want to throw away this symbol. It means too much for them."

There's no hard data on bicycles in Madrid. Other Spanish cities like Barcelona and Sevilla have bike-sharing schemes like the one New York debuted last summer, through which the municipality can track bike use. But the Spanish capital's last bike tally was taken nine years ago, during the economic boom. Since the crash, activists estimate the number of cyclists here is doubling every 2.5 years — as the cost of public transport and fuel go up.

"We are learning every day, about the crisis. Maybe it's not changing the things that we thought at the beginning would change — the politicians, the banks, that kind of things. But it's changing our minds," says Juan Salenas, another cyclist at the Bici Crítica rally. "We spend less. We try to live with [what we have, and be] more happy. And we try to keep what we have, because maybe we will lose it tomorrow."